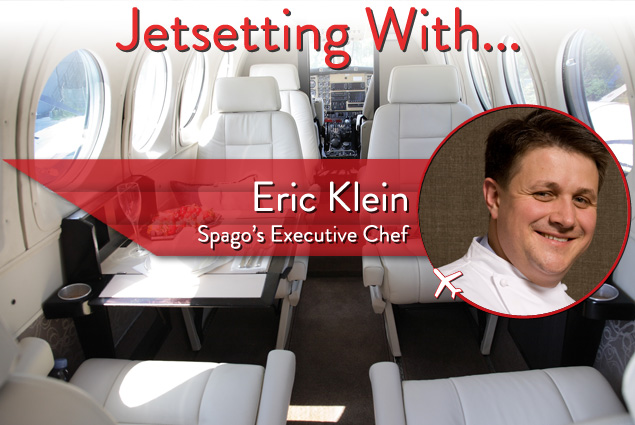 It’s difficult to dine in Las Vegas without choosing a restaurant run by a celebrity chef. Wolfgang Puck’s Spago Las Vegas is widely considered to be the one that started it all, and the restaurant continues its trendsetting ways under the watch of executive chef and associate partner Eric Klein. A native of Alsace, France, Eric spent seven years working alongside chef Puck at his California-based restaurants before launching his own award-winning restaurant in Beverly Hills and then moving to Vegas to open SW Steakhouse at Wynn Las Vegas.

Eric found his way back to the Wolfgang Puck brand and continues to uphold the restaurant’s reputation for fine dining and service in style. Read on to find out how a passion for food affects his travel style and where he plans to visit next.

A: I am like the dining equivalent of extreme sports when I travel, often cramming in 24 restaurants in 36 hours (not recommended for everyone or for every vacation, but it’s tough to get away from the restaurant so when I do I want to see (and eat) as much as I can.) I love taking my wife; she is a great traveling companion. She can research an area, knows what I like, and figures out the plan, so we have a logical path and can fit in as much as we possibly can.

A: If it’s longer than a weekend, then I love balance—extreme dining, lots of walking, lots of fresh air, and interesting people (who we always find when we’re in restaurants!). My wife loves art and I love antiques, particularly ancient Egyptian artifacts and history, so we usually like to fit in a museum or two if they’re particularly great in the area we are traveling. However, we don’t try to do the entire museum; instead, we try to create themes. For example, a few years ago my wife saw the Louvre had a really cool tour of lions (I’m a Leo), so we “raced” through the Louvre on a lion scavenger hunt, taking pictures, laughing, and having the best time.

As for spas, if truth be told, I’m a total spa junkie. So if my wife wants a weekend getaway in Sedona, if I can get away too, I’m in. Where I relax the most is at home with my wife and three Vizslas around our pool or at home in Alsace with my parents at their farm. Anytime I can be outside connected to the earth and people I love, I’m totally at peace.

A: I want to learn. Even though I’m from France, I don’t know my own country very well. I want to understand where the technique I know comes from. I want to absorb it, pay my respects to those who’ve gone before me, learn more from them, and be inspired by those who are as passionate as I am about cooking. Our next trip will be to the farm to see my family, but first we’re hitting up London, then Paris, then Lyon with hopefully a stop in Laguiole, a quick visit to Zurich, then Basel and my old kitchen in Germany, and then my sister’s restaurant in Kaysersberg.

We do tons of research, led by my wife. First, we reach out to friends in the area who may or may not be chefs, and we reach out to her classmates from Cornell, many of whom are in the industry. She uses food magazines, books, guidebooks, and “Best of” lists. She’ll find great blogs and then follow (“stalk”) them on Facebook. I’m more of an Instagram hound, so we look for folks who have taken pictures of or have blogs about the places where we’re headed. We also look at travel magazine websites and shows. You wouldn’t believe how excited she was finding an episode of Tony Bourdain’s about Lyon one day when she’d run out of inspiration, and there it was the second she turned on the television.

A: Our totally unplanned honeymoon trip, where we knocked on the kitchen door at Au Crocodile in Strasbourg and ended up having a magical dinner that evening with chef Emile Jung and his wife. The next day we went to lunch at Auberge de l’Ill in Illhaeusern and ran into Jean Joho, another Alsacien chef and an old friend of ours. We’ve also had incredible times with Eric Ripert in New York, with Guy Savoy in Paris on my first trip there a few years ago, with Santi Santamaría in Barcelona at El Racó de Can Fabes, and with Martín Berasategui in San Sebastian. My wife and I fell in love with La Cepa, and the owner and his daughter took us to men’s private singing clubs. Because my wife had done her homework, when she asked the owner about them, he beamed and couldn’t wait to show them to us. We made great friends for life on that trip and can’t wait to get back to see them—or to have them come visit us!

A: Barcelona and San Sebastian blew me away.

A: My phone to take pictures and our iPad to play games. We also like to Skype back home to see our dogs and our friends who take such good care of them for us.

A: Wolfgang’s “Live, Love, Eat.” If you really want to learn about a country, eat. Get outside, breathe the air, appreciate the architecture, try to speak the language, and find the markets. From there, everything will flow. But if you’ve done your homework in advance then you can ask questions, and it’s usually incredibly appreciated. Then just relax, enjoy the moment, get your head out of the guidebook, and let the trip happen. Be open to meeting new people, having new experiences, tasting new things, and becoming a local. We know we’ve had a great time when we talk about how we could see ourselves living there.

A: San Sebastian in Spain, definitely.

A: Los Angeles, San Francisco, New York, Sedona, and this may come as a surprise, but we love going to the Capital Hotel in Little Rock, Arkansas.

A: Asia, then Egypt. They are definitely next on our list!

A: We are celebrating the 22nd anniversary of Spago Las Vegas this December. In honor of the anniversary, we are inviting guests to flash back to 1992 with a weeklong menu that includes Wolfgang Puck originals from when the restaurant first opened its doors, plus we’ll offer retro pricing. When Wolfgang Puck opened Spago at The Forum Shops at Caesars, it changed the Las Vegas dining scene forever. Over the next 20 years, the best superstar chefs in the United States and beyond started to follow and open restaurants here.

Born and raised in Alsace, Eric Klein began his career in France where he received his diploma in 1991 from Lycee Professional. He completed two apprenticeships before joining the French military in 1992, where he worked as an officer’s chef managing daily meal preparation and special events.

Klein joined the Wolfgang Puck Fine Dining Group soon after relocating to the United States in 1996. He spent seven years working alongside chef Wolfgang Puck at his California-based restaurants. His creativity, leadership, and support enabled him to advance quickly through the ranks. Klein left Spago in August 2003 to open Maple Drive in Beverly Hills. Within three months, the restaurant earned three stars from The Los Angeles Times, and Klein received multiple accolades including being named one of the Top 10 Best New Chefs in America by Food & Wine magazine in 2004.

Admirable reviews followed, gracing the pages of top epicurean magazines, including Bon Appetit and Gourmet Magazine. In January 2005, Klein moved to Las Vegas to launch SW Steakhouse at Wynn Las Vegas. After embarking on a variety of roles and challenges within the fine dining industry, Klein rejoined the Wolfgang Puck Fine Dining Group to take the helm of Spago, Puck’s first restaurant in Las Vegas.