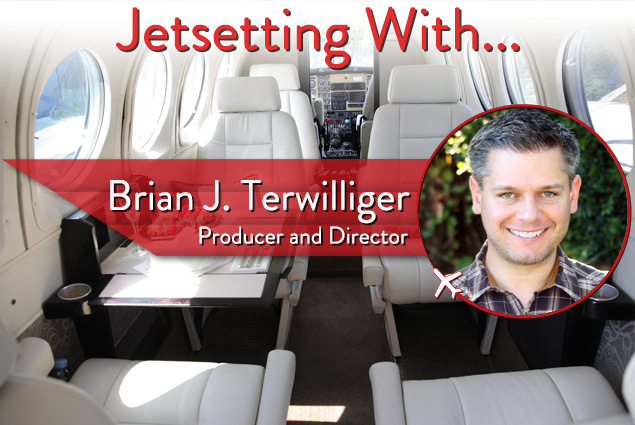 It was the Blue Angels, an elite team of precision Navy jet pilots, that first sparked Brian J. Terwilliger’s interest in flying. He is now a licensed pilot and combines his love of flight with his talents as a director and producer, creating three documentaries centered on aviation. Brian’s most recent film, “Living in the Age of Airplanes,” took him to 18 countries around the world, capturing stunning imagery to show the dramatic ways aviation has transformed the world.

We asked Brian about his most memorable trip, his best travel advice, and his plans for the future.

A: During the production of my last film, “Living in the Age of Airplanes,” I traveled to 18 countries across all seven continents capturing the story of “how the airplane has changed the world.” It was an intense couple years of being on the road more than being at home, so it was important to go with the flow and be able to change gears quickly. It was an adventure in every sense.

A: The perfect destination for me has a little of everything. I enjoy activities that I can’t do back home, but when I’m on vacation, doing nothing is a true luxury.

A: Since most of my recent travel has been related to work (filming), when I travel for pleasure, I seek places that are relaxing and rejuvenating. I rely mostly on the recommendations of people I know.

A: The South Pole. It was an adventure of a lifetime! There’s no other place on Earth like it (literally). I visited during their summer (January), so the sun never set but the temperature still fell to -40ºF at times. I camped for three nights in a tent at 9,300 feet above sea level on the ice, which is more than a mile thick.

A: I’ve had the good fortune of eating many great meals all around the world, but a couple that stick out was a breakfast buffet in Doha, Qatar, and a steak dinner in Dallas.

A: Don’t over plan. If your schedule is packed before you even arrive, it doesn’t allow time to stumble upon the unexpected things that just might be the most memorable.

A: New Zealand. It’s the most beautiful country I’ve ever visited.

A: One of the great things about living in Los Angeles is the number of diverse places within a two- to three-hour drive from the city. I love riding the train to Santa Barbara, taking a drive to San Diego, and, in the winter, heading to Big Bear to go skiing.

A: I’m looking forward to traveling and promoting “Living in the Age of Airplanes” around the United States as well as internationally as more cities begin their theatrical runs.

A: I have a few projects on the horizon, but I’m looking forward to spending as much time as possible traveling for pleasure before I set out on my next filming adventure.

Brian J. Terwilliger is a filmmaker whose unrelenting pursuit of excellence has taken him to all seven continents in search of compelling stories and stunning imagery. A licensed pilot captivated by flight since childhood, Terwilliger has produced, directed, and secured the financing for three documentaries, each looking at aviation from a different perspective.

His first film, the 2005 feature “One Six Right,” focuses on the romance of flight as seen through a day in the life of the Van Nuys Airport, a local general-aviation airport in a Los Angeles suburb. As a result of making that film, Terwilliger was granted the rare opportunity to fly in an F-18 Hornet with the Blue Angels, the elite team of precision Navy jet pilots that first sparked Terwilliger’s interest in flying when he was a boy. He chronicled that experience in the 2008 short film “Flying Full Circle.”

Terwilliger has spent the past several years making “Living in the Age of Airplanes,” which looks at the dramatic ways aviation has transformed the world. Narrated by Harrison Ford, with an original score by James Horner (“Avatar,” “Titanic”), the film uses spectacular images shot in 18 countries to illuminate how airplanes have empowered a century of global connectedness our ancestors never could have imagined. The film was released by National Geographic on giant screen, digital, IMAX®, and museum cinemas worldwide beginning on April 10, 2015.

After spending his early years in Connecticut, Terwilliger moved with his family to Southern California at age 16. He took his first solo flight at 19 and earned his private pilot license the following year. More recently, Terwilliger was honored to serve as emcee at the 46th Annual National Aviation Hall of Fame enshrinement ceremony, considered the “Academy Awards of Aviation.”

Terwilliger attended California State University, Northridge, where he created his own major in business and entertainment. After graduating in 1999, determined to learn every facet of the film industry, he began working in various capacities, from movie-theater projectionist, to production manager and 1st assistant director on independent films, to visual effects coordinator on the features “Big Fish” and “The Core.”