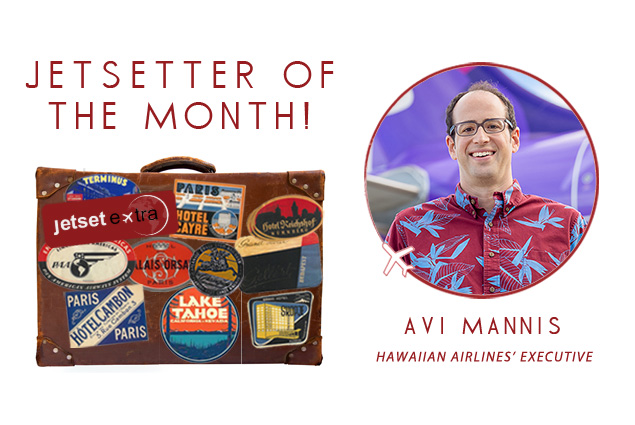 Air travel plays an integral role in the daily life of those who live on the Hawaiian Islands. Avi Mannis especially understands this, as he is the senior vice president of marketing for Hawaiian Airlines. “With no other way to get between the islands, we provide an integral piece of infrastructure,” Avi says. He adds Hawaii’s residents travel often on the airline’s inter-island flights for a variety of reasons, including high school graduations, family potlucks, intramural sports, shopping, and doctor’s appointments. 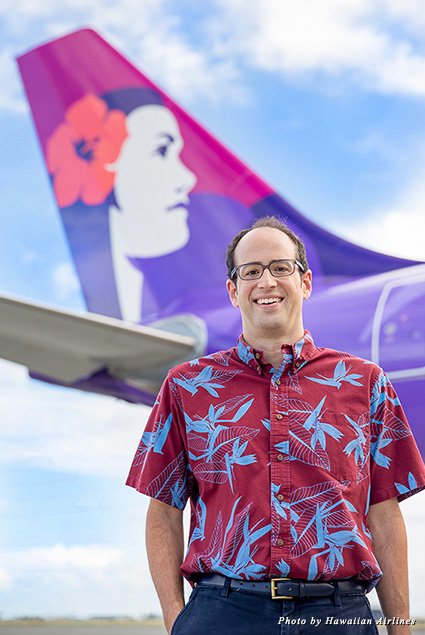 Travel is a necessity for Hawaiians, but Avi says he also appreciates it for the quiet time he’s able to experience while on an airplane. Though it’s becoming a rarity to have time away from email, phone calls, and social media as planes increase ground-to-air connectivity, Avi says he’s come up with some of his best ideas during that time in between destinations, when he has a break from all the noise and can just think.

He also has an appreciation for the amount of work that goes into enabling air travel, which he says is newfound since he joined the airline industry. “From sales to catering to flight operations and cabin service, each time you fly is the end result of hundreds of people working in concert with each other,” Avi explains, calling it a “complex, and maybe a bit magical, undertaking.” Though he knows not every flier is concerned about what goes on behind the scenes, Avi knows learning what goes into getting safely and comfortably from one place to another has greatly enriched his flying experience.

As much as he loves to travel, Avi says he never had any particular affinity for air travel since he is high-stressed when it comes to airports and flight arrangements. However, he explains what he does love is competitive, challenging business and describes commercial aviation as a tough, exciting, and dynamic industry. “Hawaiian Airlines has been a terrific place to build my career in aviation,” he says, adding, “It’s an 85-year-old airline that’s grown rapidly and begun competing on a new global level and with an unmatched culture of customer service that is rooted in the values of our islands.”

Though Avi says he traveled a fair amount growing up, it was while studying archaeology as an undergraduate that he really felt he embraced the experience of travel. “Field archaeology has a way of taking you far off the beaten path, and I had some unforgettable experiences that impressed on me the value of traveling far, far away from the life you know,” he says, reminiscing, “There’s nothing like sitting in the middle of nowhere on a cool desert night with people from all over the world and a beer fridge plugged into a diesel generator.”

For his getaways these days, Avi tends to fly to some of the big cities Hawaiian Airlines currently serves, including Tokyo, Sydney, Auckland, and Seoul. He describes Seoul as “a tremendously dynamic, energetic city at the moment, and I love the way traditional culture and really bold pop culture are colliding and co-existing.”

Avi also appreciates the fact that he has the natural beauty of Hawaii right in his backyard. He travels often for work and says there is nothing quite like that first waft of the warm, heady air when he steps off of a plane upon return to Honolulu. “Our islands are a truly unique destination,” he explains, “and one that we’re fortunate to be able to share with the world.” There is a wide range of experiences visitors can have during a single day on one of the Hawaiian Islands, taking them from the beach to the jungle to the snow to sprawling farmland. Visitors can lounge the day away, shop at world-class stores, or participate in hardcore outdoor adventure. “And of course underpinning all of that is our wonderful host culture and the spirit of aloha that permeates everything and everyone,” Avi gushes.

The question he says he is asked most often is which island a traveler should visit or which island is his favorite. There are six major islands—Kauai, Oahu, Molokai, Lanai, Maui, and Hawaii Island—and each has its own distinct personality and offers its own activities and adventures. Thus it’s tough for Avi to pick just one island as his favorite, so instead he recommends island hopping—on Hawaiian Airlines of course, which is the only airline that offers flights to all the islands.

It’s not just Hawaiian residents who take advantage of the quality service and flight options Hawaiian Airlines offers. Avi says the islands have seen tremendous growth in visitors from China, so he expects Hawaii’s visitor industry will focus even more next year on how best to welcome and serve new Chinese guests.

Another travel trend Avi has noticed is how mobile devices have grown in importance for travelers, not just for navigation and air/hotel booking but also for such things as content and translation services. This can, “empower travelers to experience more of their destination and get even further off the beaten path,” he says. Avi also expects to see travelers take advantage of more frequent, shorter getaways as opposed to longer vacations.

The most valuable advice Avi says he ever received about travel was not to be afraid of staying in one place for a while. “There can be such pressure to see everything at once that people miss the simple pleasures of experiencing daily life in a destination,” he cautions, explaining the trips he most enjoys are the ones where he feels like a regular at a café or bar, gets to know the local baker, learns some of the language, and settles into the rhythm of a new place.

“I think travel can help to appreciate the breadth of human experience and give perspective on one’s life,” he says. And with their inter-island and worldwide connections, Avi and Hawaiian Airlines strive to help people do just that.