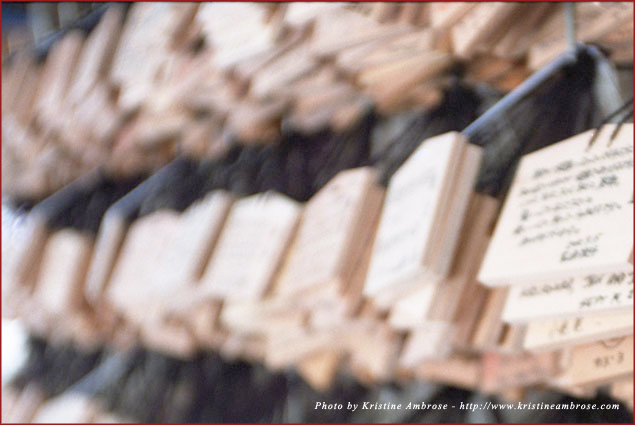 My partner Dan flew to Japan on business, and I caught a flight a week later on Singapore Airlines. I packed light, taking my Nikon T90 film camera, multiple roles of film, a Canon Digital PowerShot, minimal clothes, a book on Kyoto and Japan, and my JR Rail Pass. If you want to take advantage of the photographic possibilities in Japan, buy a rail pass and take a journey.

TIP: Purchase a rail pass online prior to entering Japan to receive discounts. You will receive a voucher in the mail to be turned in at the JR Rail Station with your passport. In return, they give you back your passport and your pass, which will grants you access to the Bullet Train. 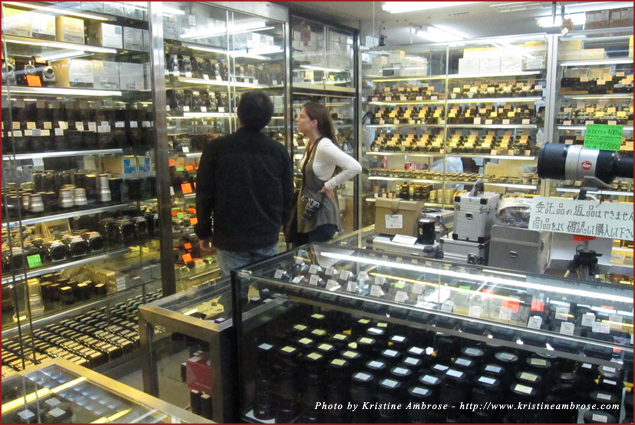 When we stepped into the train station in Osaka, we were transported into a sci-fi universe. Tall buildings, high-in-the-sky neon billboards, and advertisements shouted at us on the streets. It feels and looks like New York on steroids. 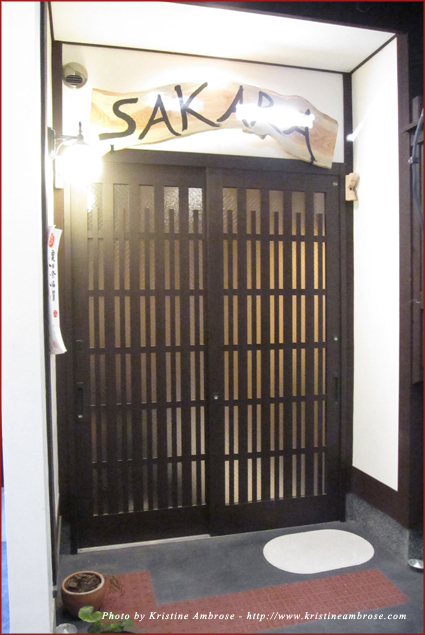 “The camera store was right here, I swear,” our friend Kei told us as we searched the streets of Osaka for three different antique camera stores. What we found out was that as of last year, only one of three stores, OS Camera, is still standing. Kei, a camera aficionado who is fluent in Japanese, was the perfect tour guide for our shopping spree. I could not believe my eyes as Kei walked me through the store looking at rows and rows of premium mint-condition antique cameras and lenses. Equipment ranges from antique to new with brands such as Leica, Hasselblad, Linkof, Sinar, Zeiss, and Rollel. Per Kei’s suggestion, for my Nikon T90, I purchased the antique Micro-Nikkor, 55mm with the 2.8 aperture. Kei’s dream camera and mine was the Leica D (Leica II) 1932-1946 with the Summicron 5cm lens. OS has quite a few.

TIP: If you don’t have access to an interpreter, do your research ahead of time on the OS Camera website, because the store’s employees speak limited English. 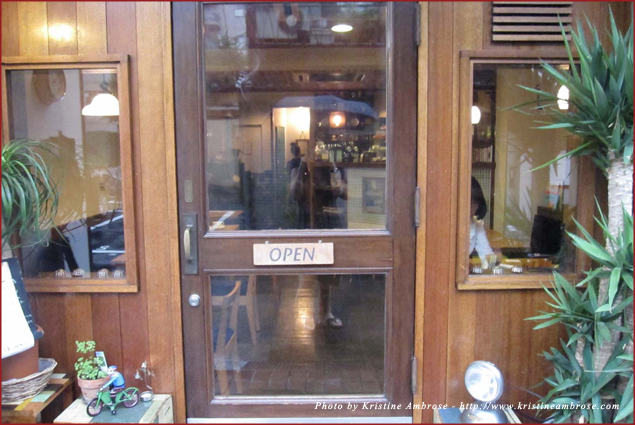 The Bullet Train took us from Osaka to Kyoto at 200 mph, occasionally banking on its side. It’s the cleanest and most efficient railway in the world, and provided a beautiful tour of the countryside. Once we arrived in Kyoto, it was a quick subway ride from the JR station to Higashiyama. 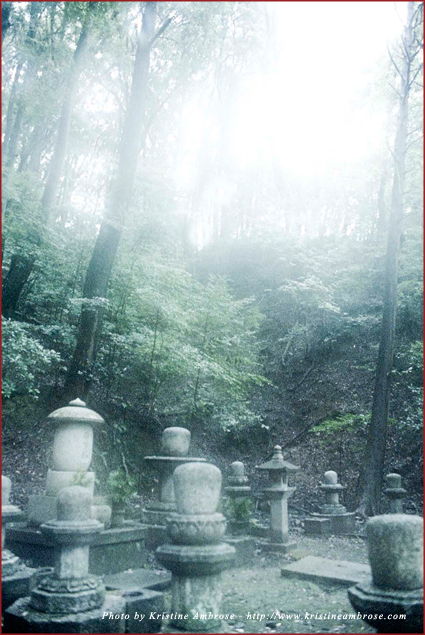 The Sakara House is 55 meters from the subway exit. The building is located on a covered pedestrian shopping street that includes fish markets, mini-marts, restaurants, hair salons, clothing stores and more. These apartments have kitchens, plasma TVs, washer/dryers and truly comfortable beds. Before we headed out every day, we ate breakfast at Kissa fe Café-ssa, steps away from the Sakara House. We ordered from a menu in English – dark and delicious coffee with cream, and a few different egg dishes. After breakfast, Dan would take a walk through the shops and I would wander over to the river behind Kissa fe and shoot pictures. This location, which is lined with low-hanging trees and features wooden bridges and a temple in the background, provides a great opportunity for the stock and art photographer. Returning to Sakara every afternoon, we would stop at the mini-mart, buy water, say hello to our new friends, and return to our flat for a nap. This transitioned us to nights of dinners and walking the city. There is virtually no crime in Japan, so we walked every night until midnight. 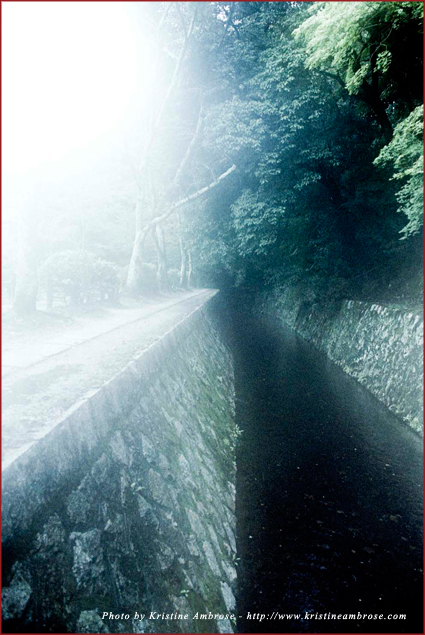 Most days we walked or rented bikes, but because of the distance to the Philosopher’s Path, we decided on a cab ride. Dan asked me not to touch the door of the cab, but I had to at least try and see what happened. Touching the door, the cab driver turned around and kindly waved his finger and said “no no.” The cab doors open and shut automatically for you, the seats are covered with white lace, and the driver wears spotless white gloves. We exited this ‘cab of paradise’ at one end of the Path. 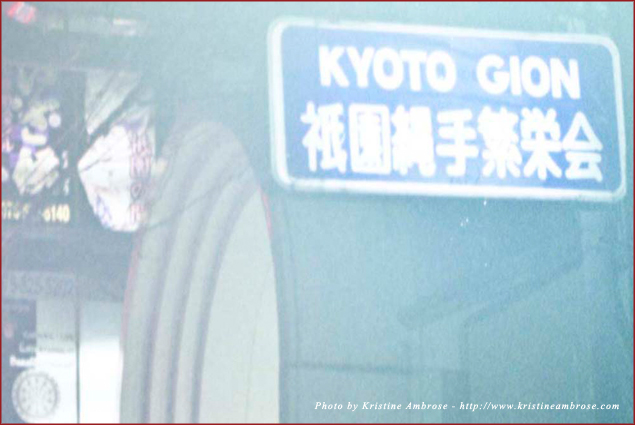 The path gets its name from Nishida Kitaro, one of Japan’s most famous philosophers, who was said to practice meditation while walking this route on his daily commute to Kyoto University. It runs between Ginkakuji and the neighborhood of Nanzenji, a five- to-10 minute walk north of Nanzenji’s main temple buildings. We walked the path at a slow pace, taking breaks at cafes and shops along the way. The Path in September is a lush green; in winter it is covered with a beautiful layer of white snow, and in the spring cherry blossoms frame it. Any time of year, this is the ultimate location in Kyoto to photograph. 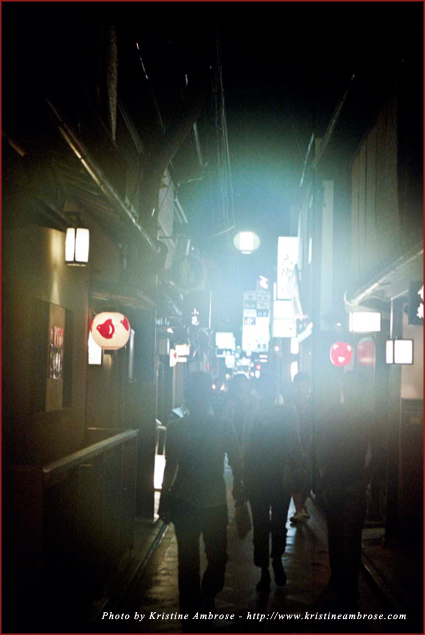 You should certainly take the six-block walk from Higashiyama to the Gion District. The pedestrian paths are lined with beautiful restaurants on each side and framed with hanging lanterns. 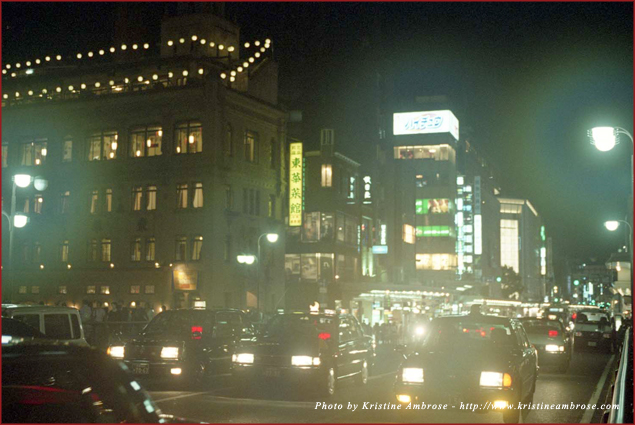 TIP: Be prepared to use a low ISO, shutter, and aperture to capture the essence of Gion at night without a flash. If you have the time, set up your tripod on the pedestrian paths and keep the shutter open for a few minutes to capture light trails and the spots of red lanterns. Since the street is narrow, you may want to wait until 2 am, when the crowds thin out. 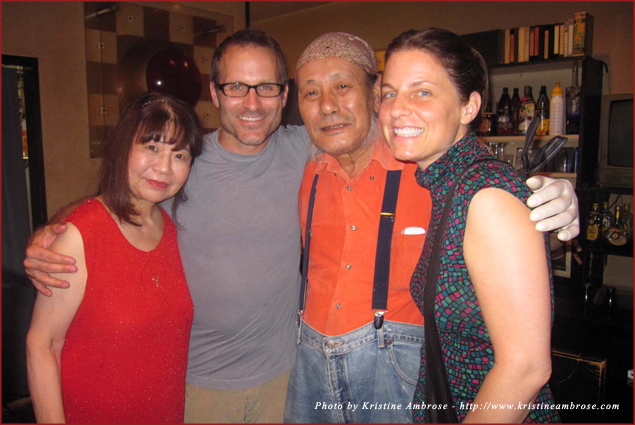 Kei gave us the night tour of Gion and brought us to a hidden restaurant that caters to the locals. We made a few secret turns down small walkways and finally arrived at the Kyoto Red Stone Restaurant. Shooting with my Canon PowerShot, I was able to capture the atmosphere within this intimate eatery that has only one table and a small bar. The owners speak only Japanese. He resembled a wise fisherman from the docks and she reminded me of my favorite aunt. We ordered one of everything off the small menu and a few different ancient bottles of sake.

“I feel like I am eating in their home kitchen,” I told Kei. “Basically, you are,” Kei said. “They make everything to order and only serve a small number of guests at one time.” The food was traditional Kyoto cuisine and divine, the sake pure and exclusive. After dinner, the owners walked us out of the restaurant and waved goodbye while holding each other’s hands. Since they do not have an English menu, eating at the Kyoto Red Stone requires blind faith, but what’s a vacation without a little adventure? 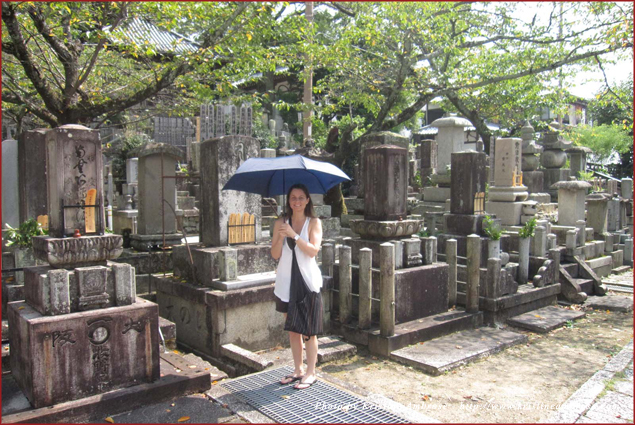 In the early morning we took the long walk from Higashiama to KonKai-Komyoji on top of Mount Yoshida. After taking in the views of the temples, give yourself a treat and walk into of the cemetery. Photograph the city from the hilltop where the cemetery is located. When photographing a cemetery, I prefer to be anonymous and capture people’s actions from afar. As I relaxed into my position on the hilltop, I photographed paths that led to tombstones and pagodas. I watched people clean the graves of their loved ones. Japanese graves include a stone monument and a place for flowers, incense, and water in front of each grave. Family members place six-foot flat wooden sotobas in holders by each grave. The names of the deceased are printed in Japanese on the sotobas, and they are beautiful to photograph. Monks sing prayers daily and lend a peaceful atmosphere to the hilltop cemetery. 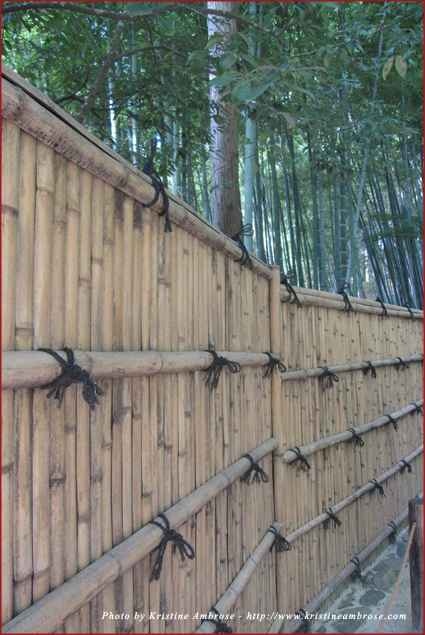 The Zen gardens of Kyoto are immaculate – you won’t find one piece of sand out of place – and seem unreal. The best time of day to photograph these gardens is when they open at 8:30 or 9 am, before they are crowded with tourists. The temple is at one end of the Philosophers Path, and I suggest hitting the path at 7:30 am for morning pictures and ending at the temple at opening. Spend a couple of hours slowly walking through the gardens surrounded by sand sculptures, bamboo forests, and statues. My first glance of the bamboo forest reminded me of the movie ‘Crouching Tiger, Hidden Dragon’ because of the thickness of the bamboo. Even though the film was made in China, this bamboo forest will remind you of the fight scenes high up in the trees. 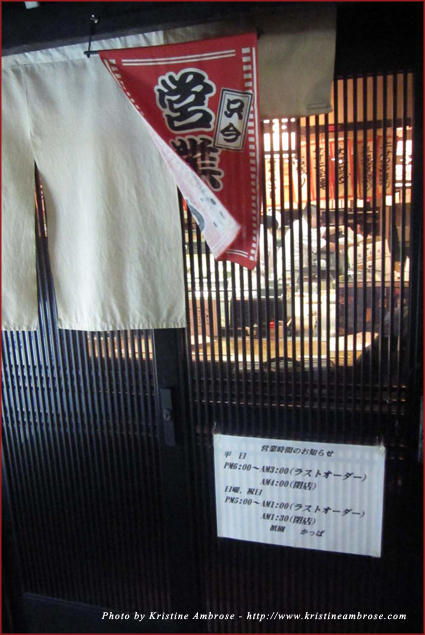 I photographed the inside of the Kappa Nawate Restaurant with my small digital Canon PowerShot. It is not necessary to bring your large cameras to the restaurants in Japan because many are intimate and require a bit of unobtrusiveness. This restaurant is worth going back a second time. The first visit was pure research and a taste test for Dan and me. They serve meats, innards, vegetables, seafood and sweets on skewers, and carry a hefty selection of sakes. The waiters are kind and speak limited English, but with an English menu you will do fine. On our second visit to the restaurant, after we finished dinner, the waiter gave us another drink in addition to our sake. As we both took sips, the waiter then gave us the bottle, which had a curled-up rattlesnake at the bottom. Laughing, he gestured that the Soju with rattlesnake was a natural Viagra, and Dan would start feeling the effects very soon. If you feel daring and are up for a night of fun, order the rattlesnake Soju 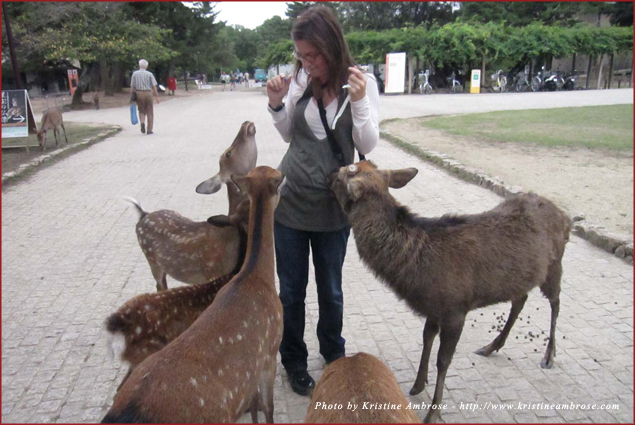 The Bullet Train goes directly to Nara from Kyoto and takes about an hour. Since I knew we would be walking for miles, I brought my film camera and asked Dan to hold my PowerShot. The eight temples, shrines and ruins cover miles around the Big Buddha and are surrounded by the Sika deer. Regarded as messengers of the gods, these deer are tame and can be approached carefully. Get ready with your camera for close-ups of the deer when you purchase the “shika sembei” (deer biscuits). When I fed them the biscuits, seven of them came rushing toward me and were pawing and kissing me gently. Once the biscuits were finished I was able to take some beautiful deer facial shots. 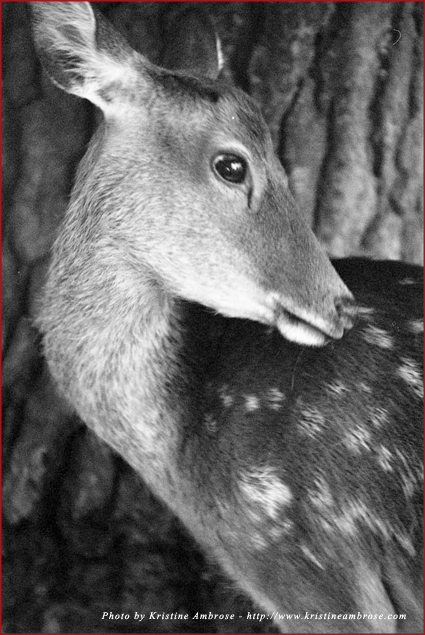 TIP: Since the deer roam on all the grounds, you will meet up with them plenty of times, so don’t shoot all of your pictures in one sitting.

TIP: In order to get a good shot, show up at the sunniest time of day, set your ISO to a high setting, and bring a lens with a low aperture.

At the end of our trip, in the cab to catch the train, Dan and I witnessed something truly miraculous to the eye of the experienced Los Angeles driver. The cab driver cut off another cabby in the station by inching in front of his car. As he kept inching, the other cabby turned and looked into our cab at the driver. Normally, at LAX, a yelling match would ensue. What we saw before us was a testament to the nature of the Kyoto people. The other cabby stopped his car and gracefully gestured with both hands and a bow for our cabby to take his spot in line. We both paused and looked at each other. Dan said to me, “THAT was kind of amazing.”

Philosophers Path
Address: The Philosopher’s Path runs between Ginkakuji and the neighborhood of Nanzenji, a 5-10 minute walk north of Nanzenji’s main temple buildings. 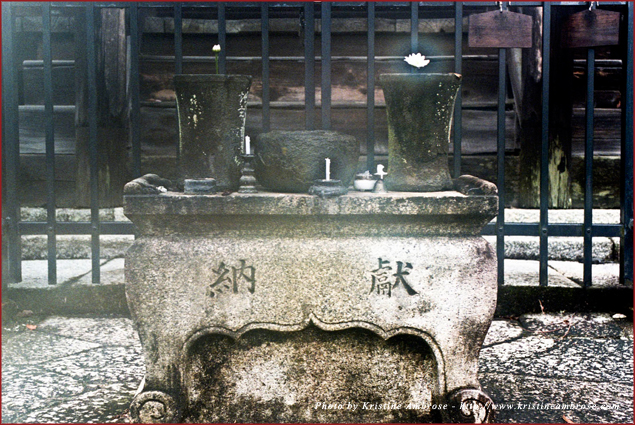