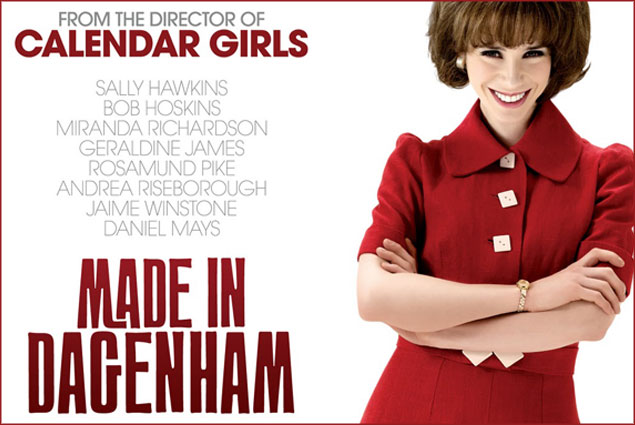 The charming, women empowerment movie Made in Dagenham opened in New York and Los Angeles this past weekend, and it is a movie not to be missed.

I had an opportunity to screen the movie at an event sponsored by the National Women’s Law Center last week. The event, produced to help raise awareness for the Paycheck Fairness Act struggling through the Senate, was held at the Tribeca Grand Hotel. It’s always fun to have an excuse to go downtown, as the cobblestone streets and industrial spaces hearken back to an old New York that seems charming now, even it if was a grittier, more crime ridden New York. Plus, what’s not to love about cocktails, movies and a good cause?

At the intimate, well-attended event, stars Sally Hawkins and Miranda Richardson, as well as director Nigel Cole, mingled with the crowd during the pre-screening cocktail hour, at which yummy hors d’oeuvres, including fried, basil risotto balls, chicken satay and edamame beans were circulated. The crowd was definitely female-centric, almost expected given the event organizer and subject matter of the film, but a good age-range of women were present.

These events are always a great excuse to check out new spaces, and the Tribeca Grand Hotel was a swanky space. So swanky, in fact, the only discernible sign outside to suggest the building you were about to enter was, in fact, said Tribeca Grand, was the clock in front of the entrance, with Tribeca Grand Hotel written across its face. Otherwise, the building could have been just another apartment building. Inside the hotel, the bar area was low-lit and sleek.

As for the movie itself, Made in Dagenham is the true story of 187 women machinists at a Ford auto plant, in Dagenham, England who went on strike in 1968 to demand equal pay for equal work after hearing news of the women machinists being paid considerably less than men. Sally Hawkins, who portrays Rita O’Grady, the film’s reluctant leader and heroine, is affecting in her role as you watch her grow into the leadership position, while also dealing with the effects of the fight on her family. Miranda Richardson is hilarious and perfect in her role as Barbara Castle, then England’s Secretary of State of Employment, and Bob Hoskins, in his role as Albert Passingham, the girls’ shop steward and union representative, is touching in his portrayal of a man raised by a single mom, thus very much aware of the importance of women being paid equal to men. At the end of the movie, my girlfriends and I were fired up.

Part of the event included a Q&A post-movie with two of the actual women participants portrayed in Made in Dagenham. Lilly Ledbetter, the inspiration for the Lilly Ledbetter Fair Pay Act, the first piece of legislation signed by President Barack Obama, was also included in the Q&A. The women of Dagenham were affecting in their conviction of how unaware they were, at the time, of the inspiration they were to women in England, and in many ways, the world. Ledbetter’s participation in the Q&A was a stark reminder of how far the United States has to go in ensuring women are paid equal to men for equal work. A sobering reminder, especially in the wake of the United States Senate failing to bring the Paycheck Fairness Act to debate, setting the cause back at least one more term of Congress, if not more.

For those in Los Angeles and New York who are not afraid to brave the Harry Potter crowds, I highly recommend Made in Dagenham. It’s an inspiring film that leaves you feeling empowered, smarter and more aware than when you went in.