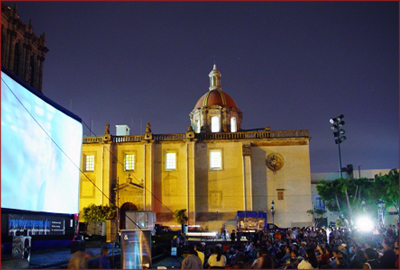 Jalisco’s capital city, Guadalajara, is ready for the 25th International Film Festival, one of the most important events for Mexican and Ibero-American filmmakers, which will take place from March 12th to the 19th.

In this edition of the film festival, France will be the guest country of honor, and representing his country in the festival will be French actor Niels Arestrup, who will present, after the inauguration ceremony, the film “A Prophet” (Un Prophète), nominated for an Oscar in the Foreign Language Film category this year. Other French films to be shown during the festival include Claude Chabrol’s “Bellamy” starring Gérard Depardieu, and Jan Kounen’s “Chanel Coco & Igor Stravinsky.”

Another guest of honor is Andalucia, Spain, which will also be presenting its films at this year’s edition of the festival. Among the films to be presented from Andalucia is Alvaro Pastor and Antonio Naharro’s “Yo, tambien,” winner of the Silver Shell for Best Actor and Best Actress in the San Sebastian International Film Festival in Spain, as well as the Public’s Award in the 39th International Film Festival Rotterdam in the Netherlands.

To be honored at the festival on March 13th is Mexican actress Maria Rojo, a leading developer and promoter of Mexican cinema and winner of several international and national awards. In addition to her participation on the big screen, Rojo has been in theater and various television projects. One of her most recent appearances on film was in the movie “Under the Same Moon” (La misma luna).

The festival will be full of different cultural activities, appealing to families, adults and children of all ages. For more information on the festival, to get tickets and to see the festival’s program, please visit their website.