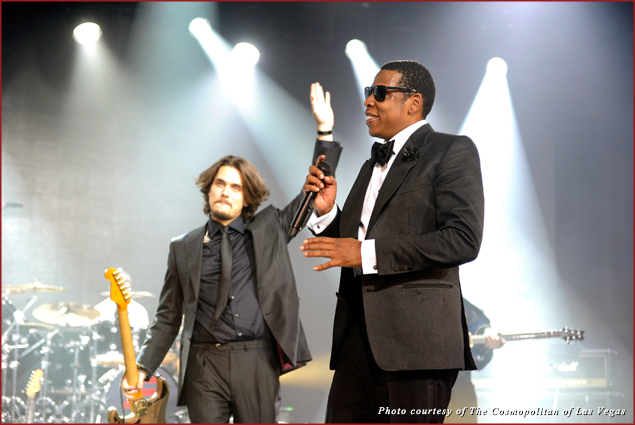 … I sure was on New Year’s Eve! With all of the amazing promotion that The Cosmopolitan had done prior to their grand opening on New Year’s weekend … I knew this is really where I wanted to ring in 2011 and I was excited to be on the Red Carpet to experience it firsthand. They pride themselves on a unique luxury experience, and it is. It was an invitation-only weekend and we were on the list.

I have quite a few celebrity interviews to transcribe, but in the meantime, I at least wanted to give you a taste of my Cosmopolitan weekend. I am going to do a quickie Top 10 of my favorite things about the Cosmopolitan so far (because I hope it was just the first date of many more to come!). This is in NO particular order, just what I am recalling on this cold Sunday afternoon back here in West Hollywood. 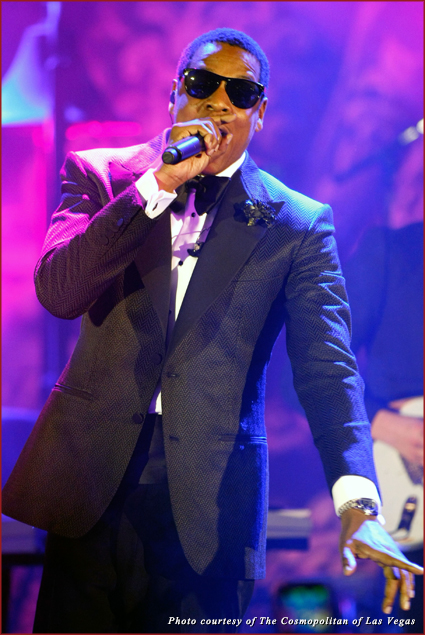 #10: The It Factor and Celebrity Sizzle
The commercials. The all night pre-event parties being hosted in LA. The tag line, “Just the Right Amount of Bad.” And a Jay-Z and Coldplay concert to boot? Now, that’s an Opening Weekend. It was so celebrity studded (like Blake Lively spotted in the elevators, Kellan Lutz on tables, Cameron Diaz shopping at Beckley). Some of the hottest couples in the house included JAY-Z and Beyonce, Jennifer Lopez and Marc Anthony, Gwyneth Paltrow and Chris Martin, Cameron Diaz and Alex Rodriguez, Haylie Duff and Nick Zano, Channing Tatum and wife Jenna Dewan, Ellen Pompeo and husband Chris Ivery and Mel B with Stephen Belafonte.

Stay tuned for my interviews with Emmy Rossum, Bonnie Somerville, Taraji Henson, Alexander Wang, Brandy, Christina Milian, Lass Bass, and Selita Ebanks. (Did you catch my video interviews on our coverage of the Victoria Secret Viewing party in NYC last month with Lance and Selita?)

#9 Size Matters
Seriously, it’s not too big and not too small. I am not a gambler, so walking through acres of casino, not so fun to me. I read somewhere that the entire hotel could fit into the Bellagio fountains. True? Not sure if that’s true, but the Cosmo is more vertical than horizontal and I loved that.

#8 At your Beck and Call
That’s seriously how the operator answers the phone when you dial “O”. They pride themselves on their customer service. I heard that they get trained for like, 5 weeks. You really do feel like it’s a home away from home. And when someone helps you, they actually engage in a conversation with you. A real one, not just a “so where are you from?” kind of thing. Which is kind of nice. And if you don’t feel like talking much? No worries there either.

#7 All that glitters
… Is the Chandelier Bar! Je l’adore. A three-story chandelier surrounded by some of the best drinks ever? Hello, I’m Vanity Girl, purveyor of Hollywood’s finest lighted makeup mirrors, and drawn to all things sparkly. The alcohol program is world-class, with master mixologists perfecting their drinks. And the bartenders? Hot. And charming. And they make a mean drink too.

#6 The Cosmpolitans
Natch. As in five different kinds of Cosmopolitans. They even have one made with White Whiskey. I think they should create a Cosmopolitan flight, so that you can try every kind. Remember the ending of Sex and the City the movie when they ask, “Why did we ever stop drinking these?” Well, you won’t once you have a Cosmo from the Cosmo which tastes even better if it’s on …

#5 The Terrace
The rooms are really well appointed in general, but when I got upgraded to the East Tower to a one bedroom suite, with a Japanese soaking tub, 2 plasma flat screen TV’s and a terrace to take in the strip? I was a happy girl. Although it was quite cold, I couldn’t resist having a little cocktail on my terrace.

#4 The Gym
Yes, I actually did make it down the gym a couple of times. Apparently, each of the guest towers does feature it’s own state-of-the-art fitness facility but I made it to the larger one (over 5,000 square feet) on the 14th floor of the West Tower. They had group fitness classes including yoga and Zumba; Technogym equipment, the best treadmills I’ve ever seen, ellipticals, kinesis, a boxing ring, and even tennis courts! And the gym is attached to

#3 The Spa
The Sahra Spa is inspired by the desert’s sky, sand and moonlight which is reflected in the gorgeous architecture of this space. When the spa director walked me down the natural wall hallway, veins of silver threaded their way up toward the silver ceiling designed to mirror the moon and stars. But it was the falling water fixture that took my breath away. And that only hints at the soul-soothing offerings. The most popular of all might be the signature hammam room. And of course, I delighted in the vanity room which gets gals ready for their night out on the town.

#2 Restaurant Row
It was like a little piece of West Hollywood, meets NYC, meets Europe in this compact and friendly yet impressive culinary collection. That is a whole post in and of itself, but let’s just say that they have elevated the Las Vegas dining experience with these restaurants. I read that they really strived to create something that locals would also want to frequent and I think they accomplished this. With everything from sushi to Chinese, to steakhouses and a hidden pizzeria, there is something for everyone.

#1 New Year’s Eve
I just had to circle back to the first things I wrote about the property. It really was an impressive, star-studded weekend. You only get one “first time” and the Cosmopolitan didn’t let me down.