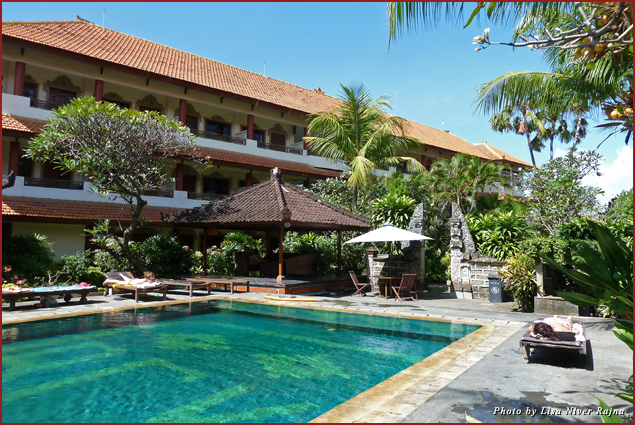 While in the town of Kuta in Bali, we stayed for two nights at Bakung Sari Hotel, booked online at Asiarooms.com. On our last trip in 2008, we did not carry much electronics with us — only a digital camera, a new Kindle (they came out in 2008) and an iPod Touch. We had no phone or computer. One couple we met in Thailand had three phones, two cameras, a computer, and a video camera. They called us brave for traveling without a phone. We said we remembered traveling before there were cell phones! We told them they could do it too.

Over the last four years during our travels, we have noticed fewer Internet cafes and more Wi-Fi zones. For many reasons, we decided that on this trip we would bring more toys: we now have a Macbook Air laptop, an iPhone 3Gs unlocked, an iTouch, a Lumix digital camera, a flip video camera, and a new Kindle 4. It seems like a lot of technology to drag about!

Using Asiarooms.com gives us more options because on the last trip we opened up the Lonely Planet guide book, tried to follow the maps, and hoped the hostels we chose would still exist and have an available room. Sometimes events worked out and sometimes they did not. But now, with Asiarooms.com and other online booking sites, there are so many deals to discover.

The Bakung Sari Hotel has a lovely setting in a temple site, with gardens and a pool. The rooms could use some care; our bathroom seemed to have termites and needed a bit of an upgrade. We did have air conditioning, a TV (albeit one with no real working channels) and a refrigerator. The breakfast was nowhere near as extensive as Bali Kuta Resort but was quite good and was included in our room price of $28 a night (we did meet a couple who had gotten it for $23 on the same site!).

Using Google maps, we figured out how to walk the 1.4 kilometers from one hotel to the other. I think the locals were shocked that we never took a taxi. We did arrange transport today to Lovina from Kuta with Perama on their shuttle bus.

They claimed the ride took three or four hours depending on traffic, but we arrived at 3 pm at the Lovina station. We were fed fried rice with egg and they showed interested guests to their rooms, which are located two kilometers from the town and the beach. Quite a few people chose to stay at the Perama rooms.

We continued by bus to town and walked 100m to our new hotel, the Bali Lovina Beach Cottages, which was 294,000Rp online or $31. However, with all the taxes and fees it turned out to be $38 USD, which does include breakfast, air conditioning, a balcony, refrigerator but no Wi-Fi – it was 50,000 per day. At both our Kuta hotels, wifi was included and fast.

One last thing for today – we usually get all our local currency at the ATM as that gives the best rate so we do not have to carry much cash. On this trip we have changed some money with money changers. A few things to know: you get a better rate for larger bills (as in $100 bill will get the 9,300 rate and a few $5 bills will get a lower rate, perhaps 8,500), if the exchange rate seems too good to be true, it probably is. I do not recommend changing money in alleys or sketchy places; remember to bring your common sense along with your suitcase.

All in all, it was a great day. I am happy to be out of the traffic of Kuta and enjoying the rice fields and beach town of Lovina. Hope you are enjoying sunsets and summer vacations.

Our One-Year Adventure Begins The Exhilarating, Terrifying Experience of Doing Something New