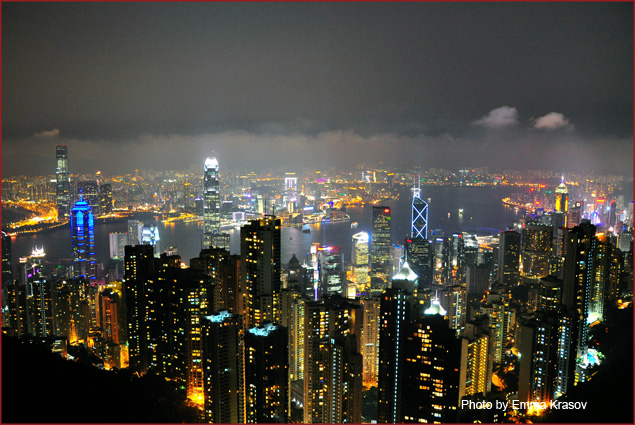 Most flights to South-East Asia change planes in Hong Kong. So there I was, just a 14-hour flight from San Francisco, jumping a day to reach the very future of Asia. I surely wouldn’t miss an opportunity to stop over and look into the city of mirrored skyscrapers up close. Watching its hurried crowds and incessant traffic, its never stopping construction sites, and its bustling trade, I remembered a picture from an exhibition. 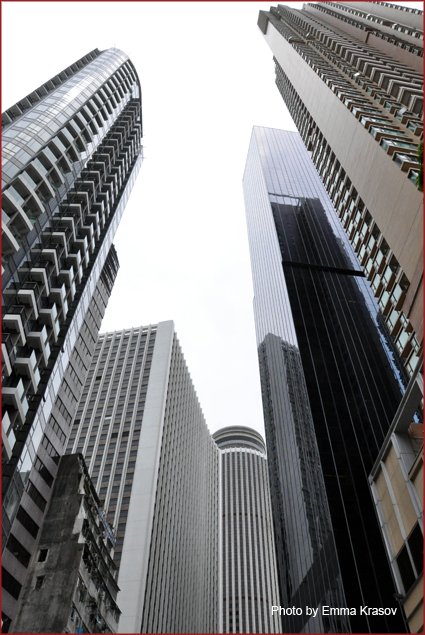 Among the young Chinese artists’ works presented at a SFMOMA show, there was one by the Luo brothers, “Welcome to the World’s Famous Brands No. 15.”

The painting depicted a rosy-cheeked happy Chinese baby holding a kind of a world-famous American cookie, and riding a tiger surrounded by golden chrysanthemums. 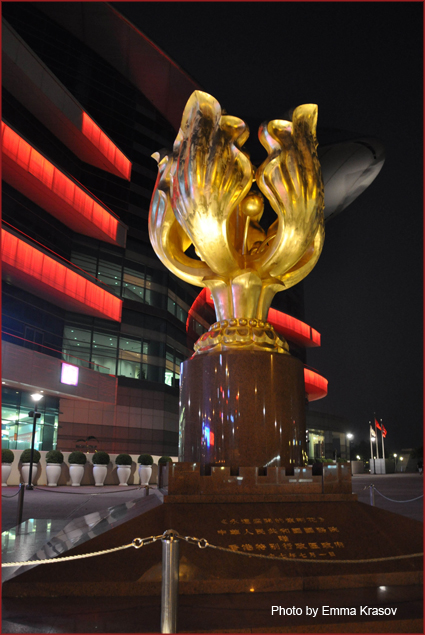 As one of the critics pointed out, the artwork combined ancient and modern symbols of optimism, associated with the current rise of the money culture in China. A baby embodied high hopes for the future; a tiger – strength and courage, but also the West, the power of Western civilization. Chrysanthemums sprung up as “a traditional symbol for the longevity of a person with excellent character and a metaphor for the sense that everything occurs in its proper time.” 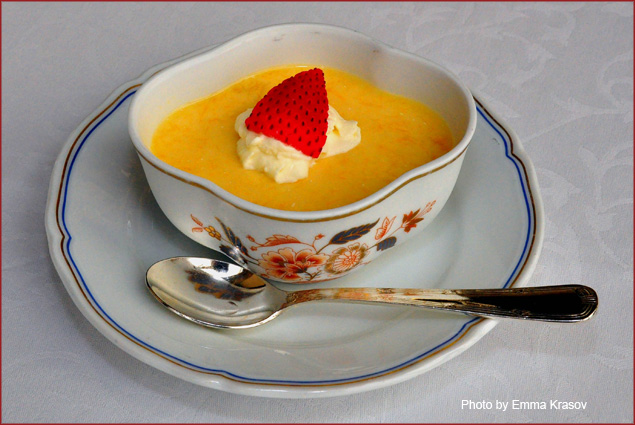 Straddling the tiger of the West, Hong Kong seems to charge full speed ahead of the entire continent, prospering and oversaturated with world’s famous brands. Everything here is big, shiny, and expensive. Visitors from the Mainland with full coffers line up at Chanel and Louis Vuitton, and are easily recognizable by their black suits and white shirts while ordering 200-US dollar bottles of wine in posh bars of grand hotels.

Once a rocky island with a few fishing villages, Hong Kong was seized by the Brits after the First Opium War with China in 1842. Along with the nearby mainland territories it was leased out in 1898 for 99 years, and returned to China in 1997 as Hong Kong Special Administrative Region, governed under the principle of “one country two systems.” Now, East and West equally influence its culture and everyday habits, and the bustling international trade penetrates the very lifestyle of its almost seven-million population, 95% of which consists of the Chinese hailing from the Southern provinces. A westernized governing system allows Hong Kong to maintain its economic prosperity, omnipresent healthy competitiveness, and excellent service, all of which promotes tourism to the most visited city of Asia. 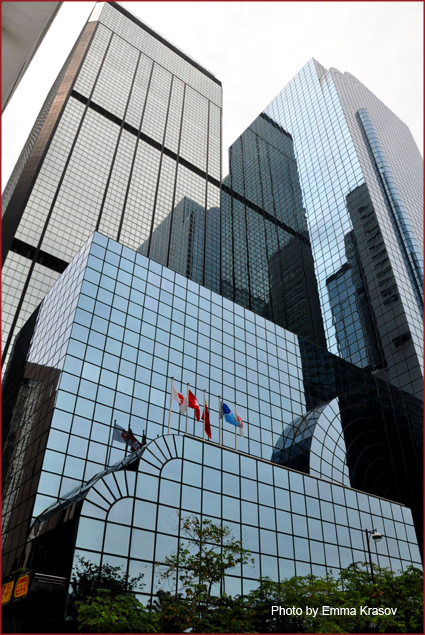 By the water’s edge in the historic Wan Chai district overlooking Victoria Harbour, there is a sculpture of Golden Bauhinia, a gold-covered flower blossom symbolizing the unification of Hong Kong and Mainland China. A daily flag-raising ceremony takes place here.

The city boasts a number of ancient temples squeezed between the towering high-rises. One of them, Man Mo Temple on Hollywood Road is dedicated to two gods – a god of literature, Man, and god of war, Mo. Giant conical incense burners hang from the ceiling, dropping fragrant ash on the heads of multiple tourists and random worshipers. A “cat street” nearby is overflowing with souvenir stalls, where bronze Buddhas, faux jade necklaces and teak netsuke are sold a dime a dozen. 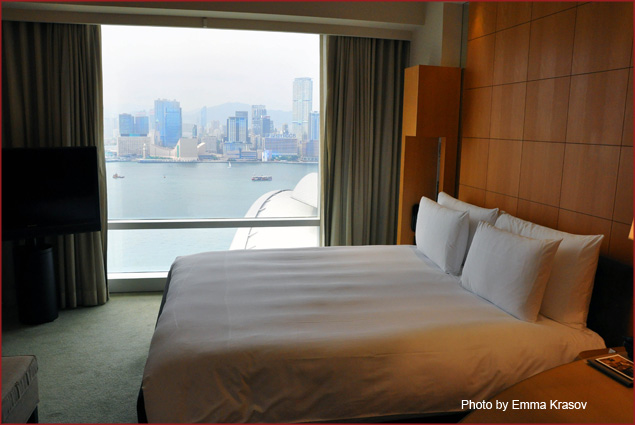 Among the many shops of Western Market, located in a dramatic Edwardian building in Sheung Wan, there is a fabric store with an amazing selection of warm shiny silks, deep velvets, rich brocade, vintage chintz, and everything in-between.

A famous Mid-Levels Escalator, the longest in the world (800 m) crosses the city north to south, and glides past SoHo, where the hippest European restaurants, bars, and art galleries can be found. 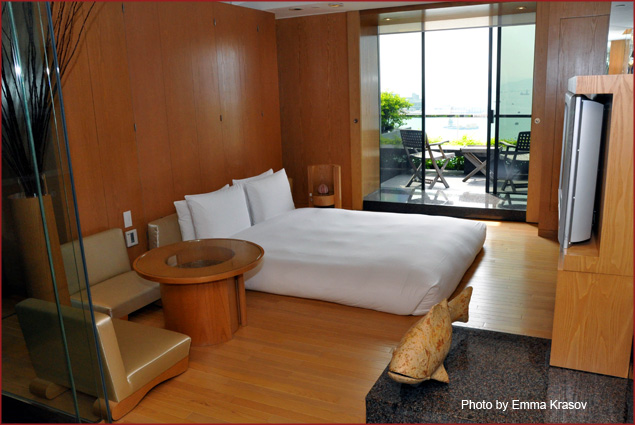 Local cuisine is abundant practically everywhere, with plenty of modestly-priced restaurants and take-out shops on every corner, dishing out appetizing BBQ meats, silky rice noodles, and of course dim sum, the special delicacy of Hong Kong. (I never tire of har gao and siu mai, and if you are not yet familiar with those precious steamed dumplings I almost envy the ecstasy of your discovery). At dusk, crowds of tourists flock to the Peak Tram to ascend to the Peak Tower Sky Terrace from which unfolds a treasure-box like view of the both banks of Victoria Harbour glittering with myriads of lights. 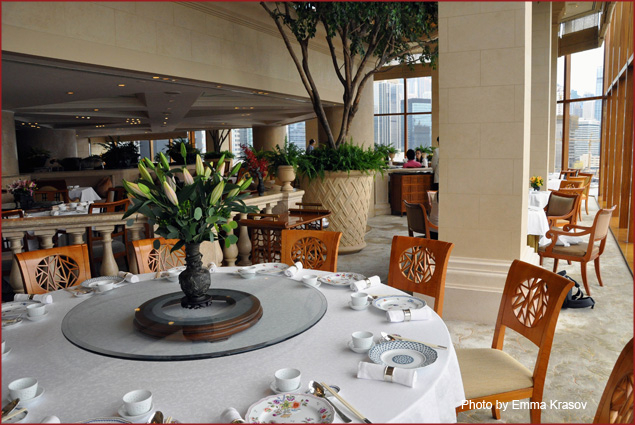 Staying at the Grand Hyatt Hong Kong, located steps from the waterfront at 1 Harbour Road, is a physically and aesthetically pleasing experience. Every room has a spectacular view and a great workstation; all doors are made of Karelian birch, and mirrored marble bathrooms with polished brass handles just scream of luxury.

In a lavishly decorated hotel restaurant, “One Harbour Road,” an exquisitely prepared traditional Chinese lunch is served on vintage fine china, and there are many more eateries on premises to choose from: Italian “Grissini,” Japanese “Kaetsu,” Thai “Thai,” open air “Grill” by the pool, “Tiffin Lounge,” “Grand Café”, and wine bar with live entertainment, “Champagne.”

The influence of Chinese philosophy and value system can be traced to the fact that one can luxuriate here for a moderate amount of money, comparable to an average American hotel stay, while an intentionally simpler accommodation comes at a higher price. 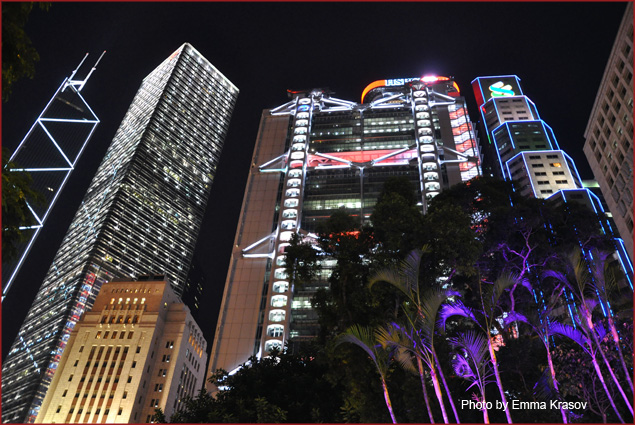 Grand Hyatt’s Spa Residence, called Plateau, is popular mostly with the guests from Japan, Europe, and Russia. It offers lean bedding on the floor, herbal teas, low-calorie menu and daily massages. A 50-meter heated pool is open to all guests, as well as gym, tennis courts, and a golf range.

The enormous hotel lobby reflects the laws of feng shui, however subtly. The oval ceiling symbolizes a hard-shell back of a crab, while two stairways framing the foyer form its claws, and two enormous bronze lanterns its bulging eyes. The crab is considered a stable and quick-witted creature, and is supposed to share these qualities with the business that hosts its image. There are also two symmetrical fountains in the lobby with in-flowing water to keep the cash flow coming in, and two fierce lions to guard the business. Visitors are urged not to look for the lions hidden somewhere in the enormous greeting area, but being a naturally inquisitive reporter, I managed to find them. Miniature lion figures stand by two humongous flower pots, on both sides of the entrance to the hotel, covered with hanging plants. I encourage all my readers to stay at Grand Hyatt Hong Kong and see for themselves. 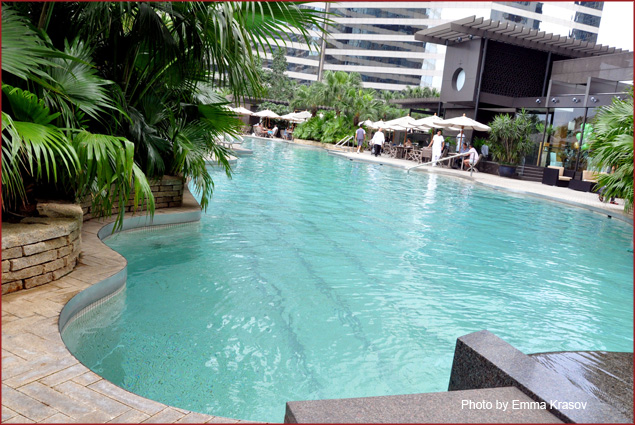