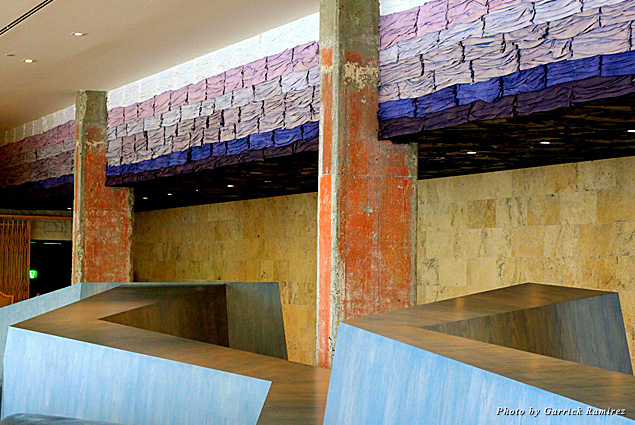 Just like travel, architecture has the ability to immerse and inspire. As often as I can I indulge my love of each, and a recent trip to Los Angeles provided the perfect fix. The sprawling Southern California metropolis hides an impressive number of landmark buildings that span eras and styles, including Art Deco, Craftsman, and an unparalleled collection of Mid-Century Modernism.

I was searching for a way to sum up LA’s diverse architectural legacy, so I asked Linda Dishman, the executive director of the Los Angeles Conservancy. The 36-year old agency is charged with preserving the city’s rich architectural fabric. Dishman told me LA has always been a pioneer town. “It’s a place where people come to invent or reinvent themselves, a place for dreaming and experimenting,” she explained. “Those attitudes show up everywhere in our built environment.”

My most recent visit was limited to downtown and nearby Koreatown, but evidence of Dishman’s insight was all around. I’ve captured some highlights from my trip below. Although I only scratched the surface, it should provide a starting point given the city’s massive—and often freeway-clogged—scale.

Downtown holds special architectural significance. As the birthplace of Los Angeles, it’s home to numerous noteworthy buildings, many of which are being restored and repurposed as the rediscovered area draws new residents, nightlife, and attention. It’s a richly atmospheric district that evokes images of a sepia-colored past and a “Bladerunner” future. The high density of buildings and sights means you can ditch the car and explore by foot, the best way to survey the urban landscape. 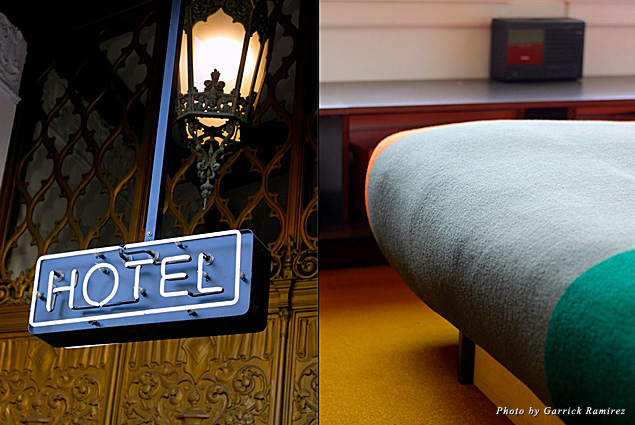 One example of downtown’s recent renewal is the ballyhooed new Ace Hotel that’s housed in the former office building and extravagant theater for United Artists. Built in 1927 for the independent studio founded by Mary Pickford, Douglas Fairbanks, DW Griffith, and Charlie Chaplin, the two structures don’t skimp on Hollywood drama. Like some fantastic stage set, the Spanish Gothic theater and adjoining offices were modeled after the Segovia Cathedral in Spain.

Ace hired the LA-based design firm Commune to reimagine the property. They blended past and present by layering contemporary furnishings and playful art over a historic backdrop. As with the Palm Springs property they designed for Ace, it has a bohemian-chic feel to match the hotel group’s hip brand. 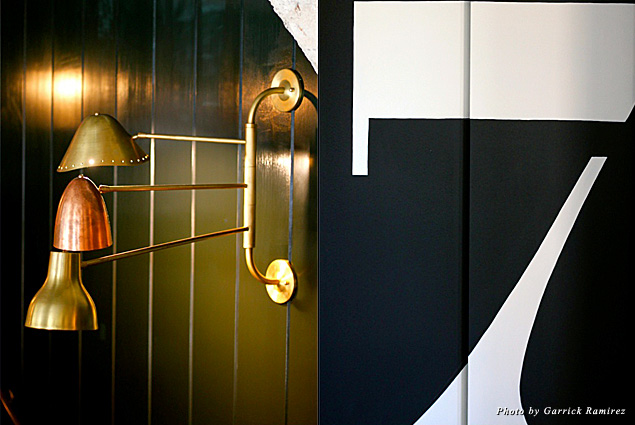 Commune also transformed the building’s rooftop into an open-air lounge that calls to mind Moroccan rooftops. A vaguely tribal print canopy shelters Mexican leather chairs and benches tossed with kilim pillows. It’s a fun spot to grab a drink and nod along to DJs while you scan the downtown skyline. The rooftop also sports an incredible view of the 1930 Eastern Columbia Building, a magnificent turquoise Art Deco gem that sits a few doors down. 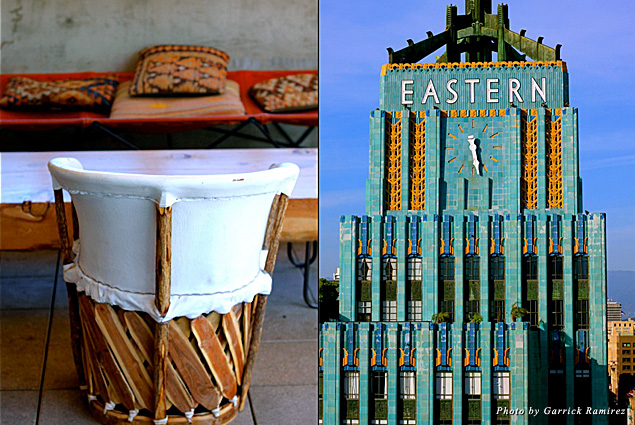 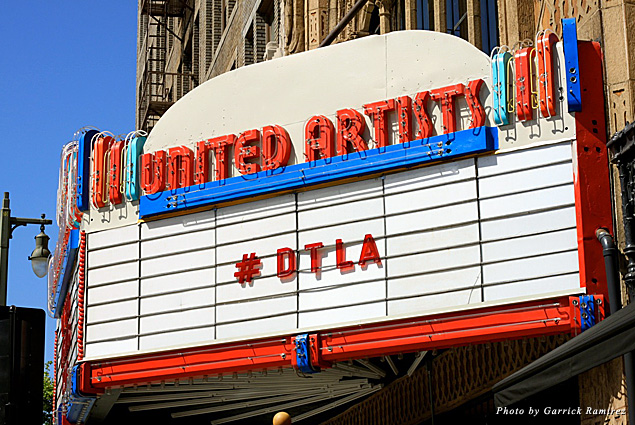 Before movies packed up for Hollywood, downtown was the city’s entertainment hub. Bustling Broadway Street was home to a dozen movie palaces built between 1910 and 1931. And when I say palaces, I mean palaces. Take for instance the Baroque lobby of the Los Angeles Theatre, which was modeled after the Hall of Mirrors at the Palace of Versailles. Many theaters have been converted into churches and retail space, but several have been preserved or restored including the United Artists Theatre, now referred to as the Theatre at Ace Hotel 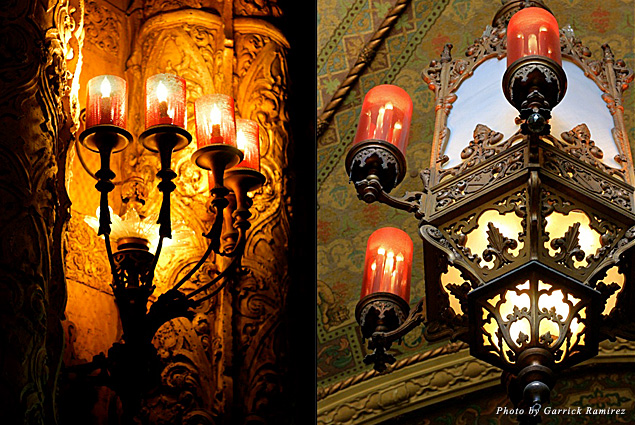 The theater’s darkly dramatic interior is a sumptuous spectacle with an ornate lobby, Spanish Gothic details, and a dazzling ceiling. On my visit, Cinespia, a local film society, was showing the 1982 cult classic “Tron,” complete with vintage Tron arcade games scattered throughout its interior. 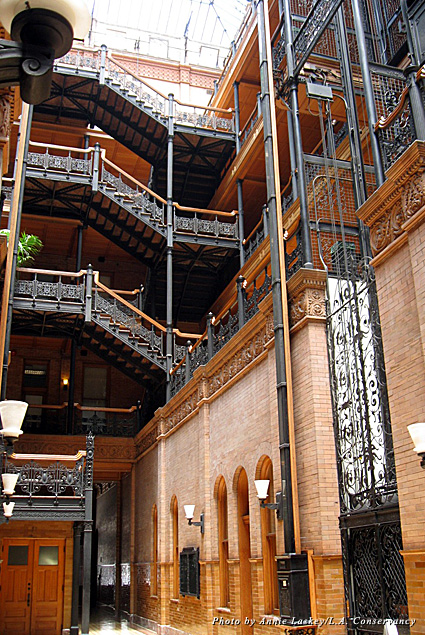 Downtown LA has far too many renowned buildings to capture here, but you shouldn’t miss the interior splendor of the Bradbury Building, the Art Deco opulence of the Oviatt Penthouse, and Frank Gehry’s sweeping steel-wrapped Disney Concert Hall. My suggestion? Join a weekend walking tour with the Los Angeles Conservancy. I’ve taken a number of them and highly recommend the Broadway Historic Theatre, Historic Downtown, and Art Deco tours for first time visitors.

Or plan your visit in June for Last Remaining Seats, the annual film series that screens classic films in Downtown’s historic theaters. It’s the perfect way to relive the glamour of these old movie palaces, experiencing them as they were intended.

The conservancy also offers an online map of more than 500 spots throughout the county you can browse via style, architect, year, building type, or neighborhood. Modernist buffs will love the section devoted to LA’s remarkable collection of Mod Mid-Century architecture. 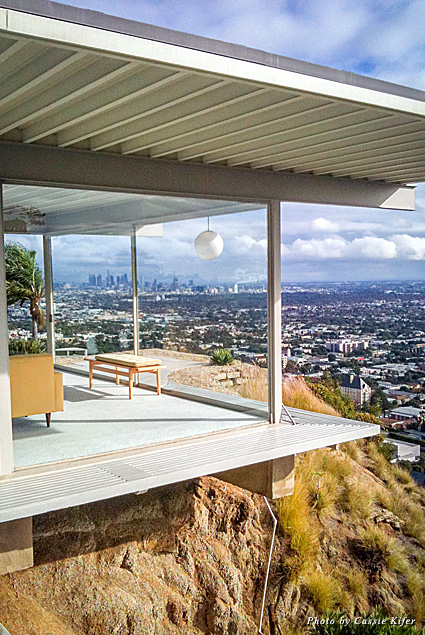 Speaking of Modernist structures: I learned from fellow Jetset Extra contributor Cassie Kifer you can tour the Stahl House, a Case Study House designed by Pierre Koenig. You’ve likely seen pics of these iconic glass homes with swimming pools cantilevered over the Hollywood Hills. Legendary photographer Julius Shulman and painter David Hockney each brought them into public consciousness with their famous representations. The Case Study Houses were commissioned after World War II by Arts & Architecture magazine and designed by prominent architects such as Richard Neutra and Charles and Ray Eames. Yep, I want to live in one, too, but you’ll have to settle for a tour. 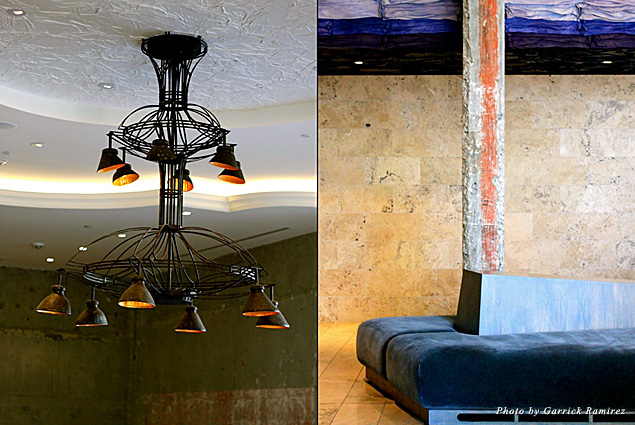 Another new design-driven property I was excited to check out was The Line Hotel. It’s located in Koreatown, a neighborhood I love for its vibrant pulse and amazing food, and the hotel proved a stylish home base from which to explore. The expansive lobby—which was buzzing when I arrived—was designed as a 24-hour hub equipped with a café and bar, cool architectural seating, and the fun Korean restaurant Pot by LA son Roy Choi. 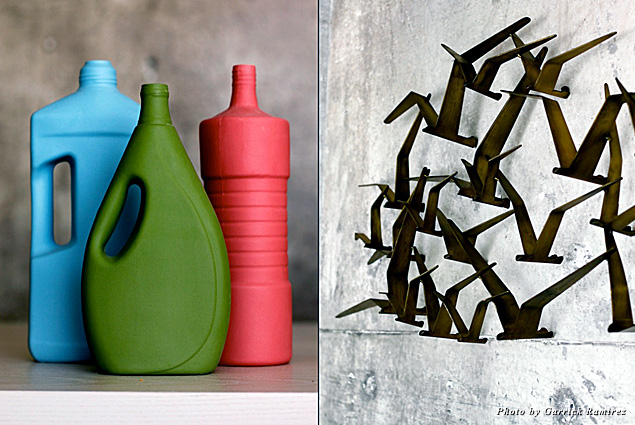 I asked numerous folks around town what this 388-room property was prior and they all said “some shady place.” It turns out the Mid-Century building was designed by Daniel Mann Johnson and Mendenhall in 1964 and over the years became a neglected hotel. It’s been completely redone by Knibb Design with a buoyant, hip style that uses low-end and discarded objects such as bleach bottles and T-shirts (trust me; it works). The exposed-concrete guest rooms are well designed with architectural fixtures, artwork, and a breezy California cool aesthetic. East-facing rooms flaunt wall-sized windows with a stunning view of the Hollywood Hills, including the famous sign and the 1935 Griffith Observatory. 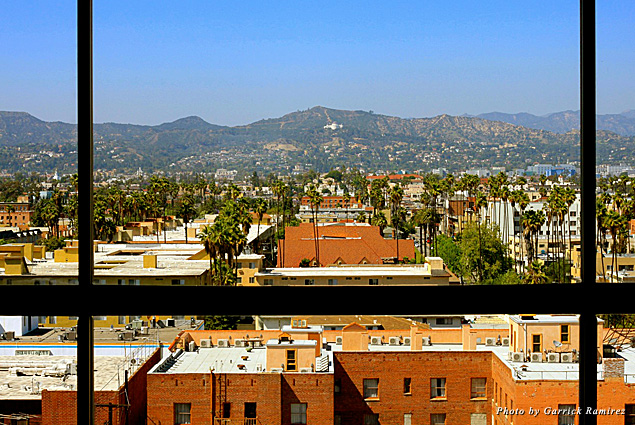 Inside the Line’s lobby is Poketo. an über-stylish boutique that serves as the hotel’s de facto gift shop. The petite shop is a satellite location of the flagship store downtown and is curated with smartly designed objects and home décor. 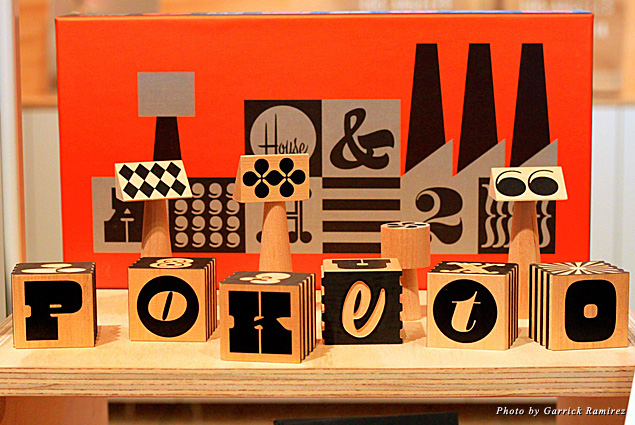 Farther down Wilshire Boulevard along what’s dubbed the Miracle Mile are some of LA’s best museums and cultural institutions. I popped into the Architecture and Design Museum to check out a show that featured the architecture and culture of Southern California’s iconic bowling alleys. Like the grand movie palaces before them, these Mid-Century entertainment complexes were escapist’s fantasies with wonderfully exaggerated design such as space-age motifs and neon signage. It made me nostalgic for the suburban lanes where I bowled as a kid. But even more so, it made me look forward to LA’s forthcoming Museum of Neon Art. 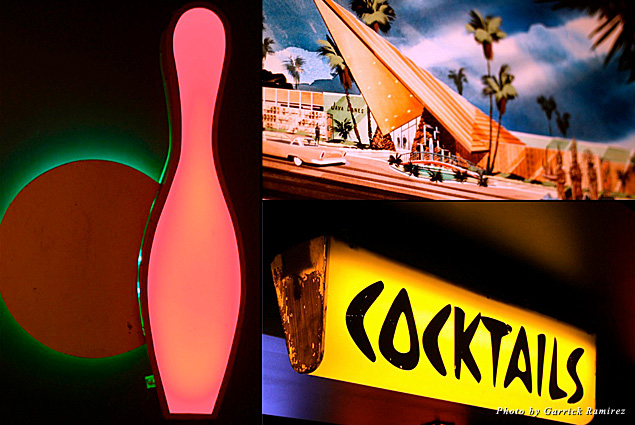