Having a Singapore Sling in Singapore 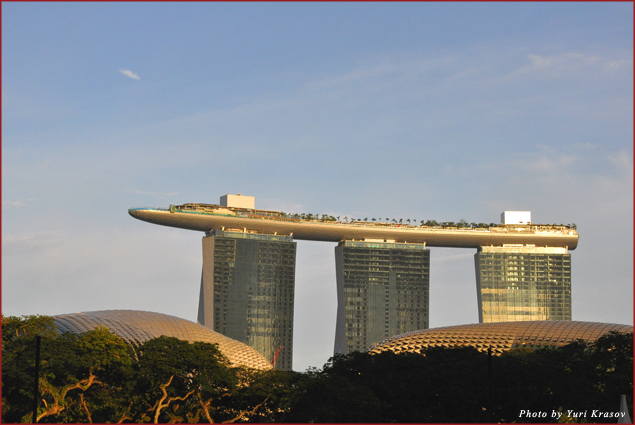 Singapore—a city-state that walks by itself. Compact like a dollhouse, and clean as a whistle, the country of Merlion (the mascot of Singapore, an imaginary creature with the head of a lion and the body of a fish) can be traversed from one border to another in a 45-minute drive. No long road trips for you here! No domestic flights either. The lush greenery, as seen through a hotel floor-to-ceiling window, looks cool, fresh, and inviting, but it’s a trompe-l’oeil. The minute I step outside, the island’s hot and humid no-season weather drenches my linen-clad body like a giant steam room. My shades fog up, and I’m sweating as if I’ve been walking up a Stairmaster, not down the street. This is so un-ladylike, I run for cover. Fortunately, on every step in Singapore there is a shopping mall, a hotel, a restaurant, or at the very least, an air-conditioned overpass crossing a busy street. 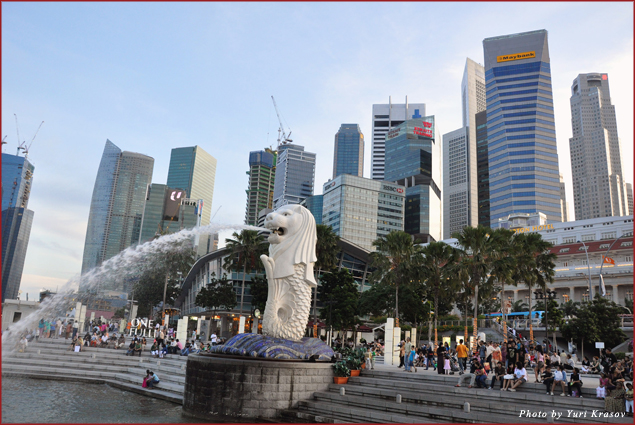 The history of Singapore started only 45 years ago when the country acquired its independence from Malaysia through peaceful voting. Even its symbol, Merlion, was created by a tourism industry professional to better attract visitors. Singaporeans pride themselves in their ethnic and religious diversity and peaceful coexistence of various creeds. Children are being taught at school to take care of their small country as if it were their apartment. There is a strict enforcement in place for all kinds of violations, from spitting on a sidewalk to having “unnatural sex” with one’s spouse. As a flagship of South-East Asia, economically advanced and politically stable, Singapore enjoys booming tourism from all over the world. Not surprisingly, the best restaurants are located in the big-name hotels, and all the shopping around them. 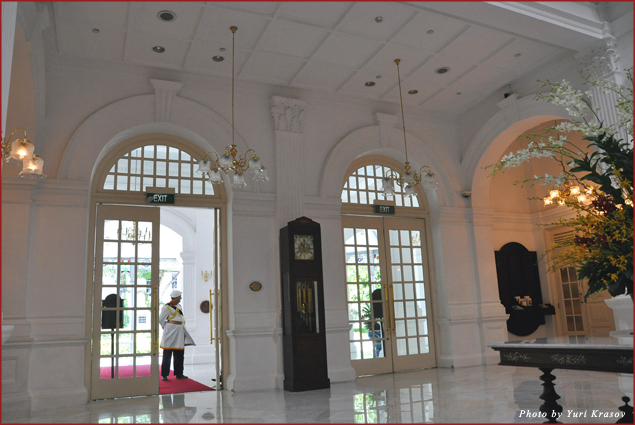 The most famous and luxurious Raffles Hotel, named after the founder of Singapore, Sir Stamford Raffles, is a glamorous historic property of the colonial era and was designated a National Monument in its centennial year. Built in 1887 by the four Sarkies brothers, originally from Armenia, it adhered to the “Exotic East” theme in décor and opulence while catering to rich and famous westerners. Having lunch at the white-table-cloth Tiffin Room, opened in 1892 by the hotel founders, was like traveling back in time to the heyday of the praised establishment. Northern Indian hot and cold appetizers and entrees, presented under silvery domes, followed a centuries-old tradition of tiffin carriers of rice, curry, fish, and meat. A dessert table seemed crowded with sweet dough morsels floating in milk and honey, and studded with raisins and rosebuds. 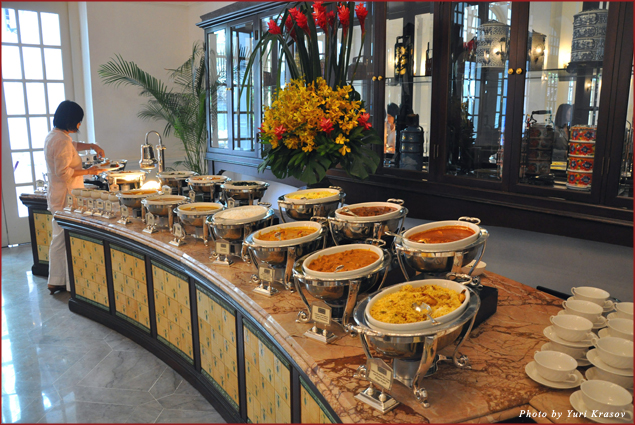 Across the marble hotel lobby with a skylight, dark wood staircase, oriental rugs, and grandfather clock, I peeked into closed at daytime Writers Bar, named after some of the Raffles’ most prominent visitors, like Joseph Conrad, Somerset Maugham, and Noel Coward. For a sweet finale, my husband and I sat under the Malayan plantation-style slow fans at the famous Long Bar, home of the original Singapore Sling. The drink was conceived here at the turn of the century by a Chinese bartender Ngiam Tong Boon. 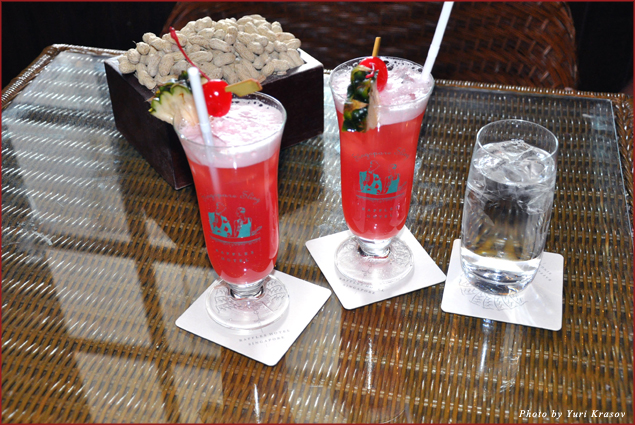 The well-mannered British ladies of the Victorian era were not encouraged to drink alcohol alongside their husbands; therefore they were invited to sit on an outside terrace at the Raffles, and sip fruit juices.

Trying to please the outcasts, the bartender started splashing gin into the juice and bitters mixture. I guess by the time their husbands were rolling out, the ladies were rather in a good mood. Today, the Long Bar sells about 2000 Singapore Slings a day.