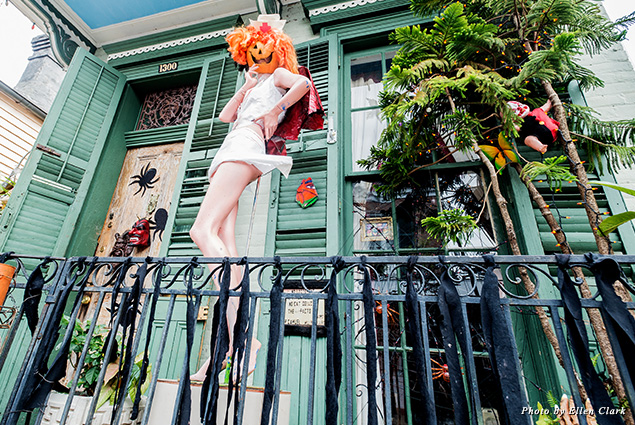 My traveling feet have carried me to many locations both exotic and not so exotic over the last several decades, but somehow they never got me to New Orleans. The city had been on my bucket list for some time and, given that apartments in the Big Easy get elevated rents if they are declared haunted and stories of Voodoo and ghosts is a huge part of the local lore, Halloween weekend seemed the perfect time for a visit. Especially since I’d been invited to ride on a float in the Krewe of Boo, the city’s official Halloween parade. 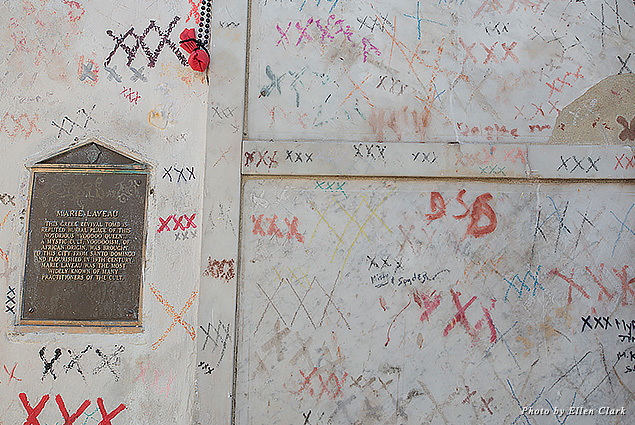 Established in 1789 and listed on the National Register of Historic Places, St. Louis No. 1 is the oldest active cemetery in New Orleans and the final resting place for more than 10,000 individuals. Famous locals who are buried here include Etienne de Boré, the first mayor of New Orleans, and Paul Morphy, one of the earliest world chess champions. But certainly the most infamous has to be Voodoo priestess Marie Laveau, who is rumored to have been interred in the Glapion family crypt. 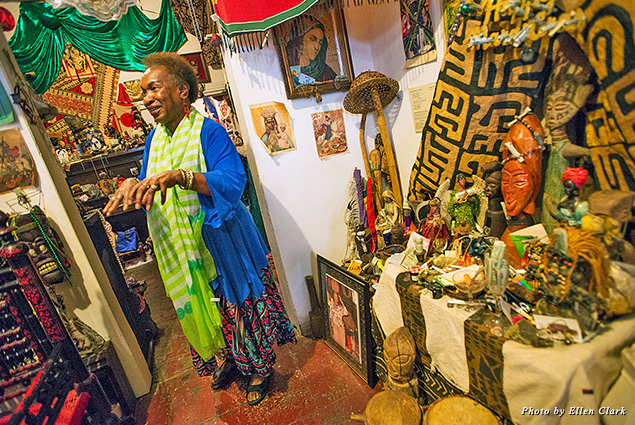 After visiting the tomb of a long-ago Voodoo priestess, I set off to visit a Voodoo priestess who is still very much alive. Priestess Miriam is the reigning monarch of the Voodoo Spiritual Temple, which focuses on traditional West African spiritual and herbal healing practices.

The front room of the establishment is a gift shop filled with handcrafted items from artists around the world. Past that is a room where Priestess Miriam works on her Voodoo dolls and mojo bags and prepares magical herbs and oils. Farther on is a courtyard where the priestess herself greeted me. As one might imagine, Priestess Miriam is quite a character. As she talked about her beliefs and powers, she ushered me into the Voodoo Spiritual Temple. A positive deluge for the eyes, the place is dimly lit and filled with an overwhelming amount of things: African statues, dolls, pictures, papers, candles, religious figures, stuffed animals, you name it. Collections of things have been fashioned into wildly eclectic altars, while hundreds of items seem to just be randomly scattered about waiting for a place to go. Besides maintaining her temple, Priestess Miriam gives private readings. Unfortunately I didn’t have time in my itinerary for one, but maybe next visit. 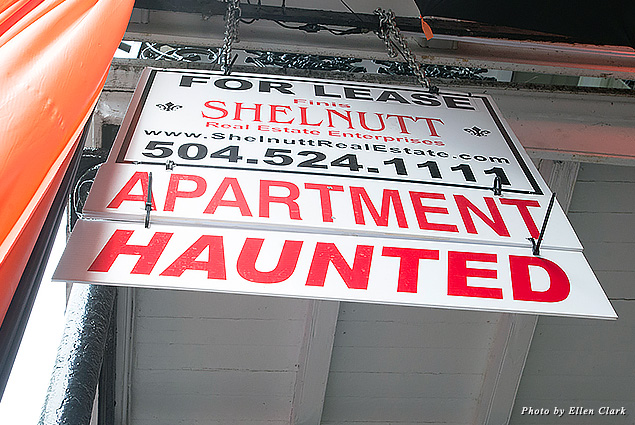 That night, I decided to go to Muriel’s Jackson Square in the heart of the French Quarter, which boasts at least one and possibly more resident ghosts. I headed to the Séance Lounge, where the most paranormal activity has been reported. People have claimed to see strange shadows, hear distinct knocks on the brick wall, and hear a woman’s voice when no female was present. But Muriel’s most notable ghost is Pierre Antoine Lepardi Jourdan, who built his dream home on this property in the 18th century but wound up losing it in a poker game and was so inconsolable he committed suicide in the vicinity of the Séance Lounge. Unfortunately, try as I might, I couldn’t conjure up one single spirit. 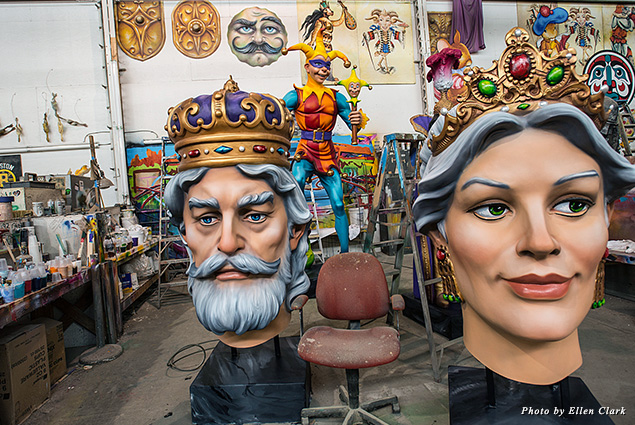 I might be a failure as a medium, but I needed to demonstrate no psychic powers to join in the Halloween parade. So the next morning, after a stop by a costume shop, I headed for Mardi Gras World. The massive warehouse is packed with parade floats, props, and work areas for building the floats. Here’s where you can get up close and personal with the fabulous Mardi Gras floats you would only see through the crowds during a parade. The detail and artistry are amazing, and the facility is well worth visiting, even if you are not participating in a parade. 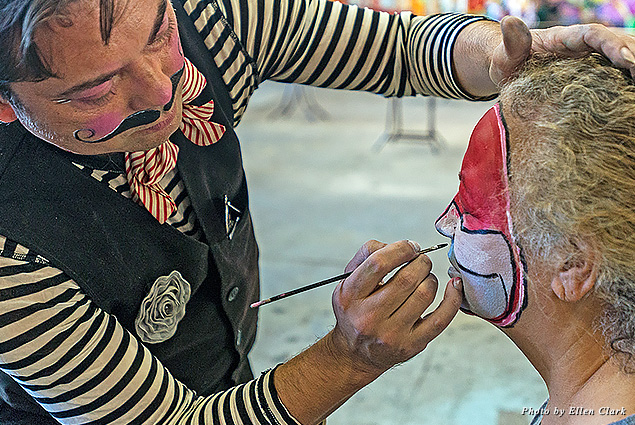 Our float’s theme was “the Exorcist,” and there was a makeup artist on site to make sure we looked just about as ghoulish as possible. With my face covered in silver makeup—which accentuated every wrinkle I might add—I looked like a member of the living dead. But vanity has no place in a Halloween parade, so eventually I hopped onto my assigned float as it slowly turned onto the main street. Needless to say the string of elaborately painted and decorated floats pulled by shiny red tractors caused quite a stir as they lumbered toward the official parade starting point. 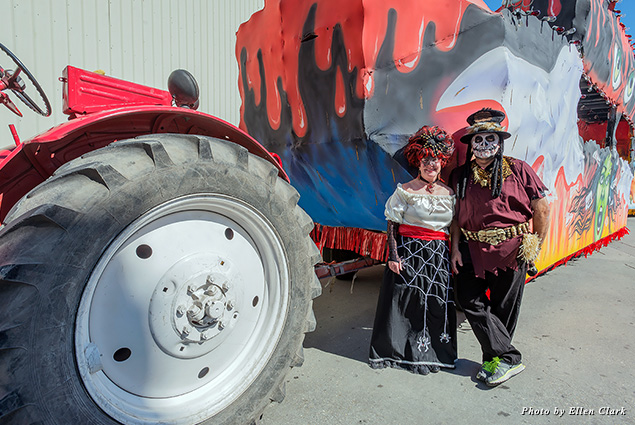 All the floats lined up until it was dark enough for the parade to start. But there was plenty of revelry happening while we waited, including a dance troupe passing out vodka popsicles. 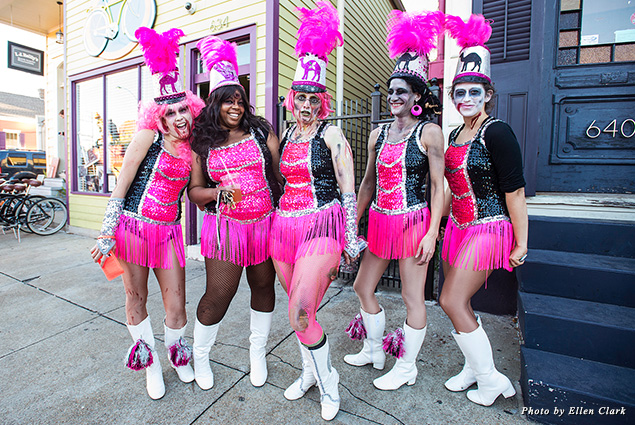 Finally we were ready for the big event, and the floats started their slow descent down the parade circuit. It was quite an experience to be rolling along the same route as the Mardi Gras parade, dressed like an aging ghoul in silver face paint, tossing candies and trinkets to the masses of spectators who lined the streets. 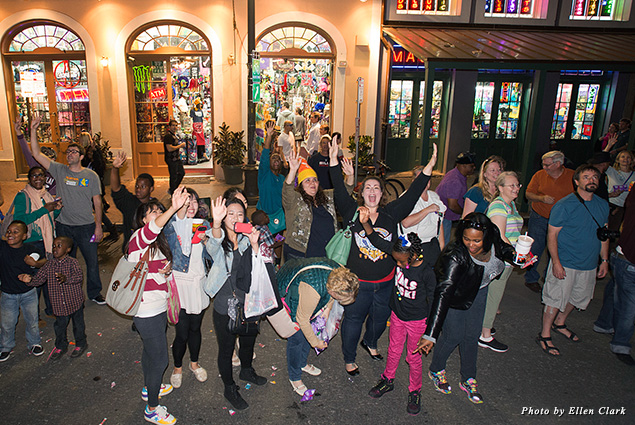 And I have to say, though the ultimate thrill must be to be part of the world famous Mardi Gras experience, riding on a float through the French Quarter on the spookiest day of the year was still way cool.