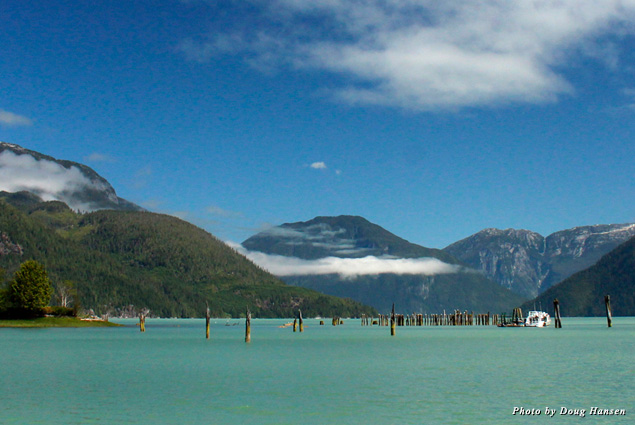 As we stepped off the boat on our way to the Big Cedar Hike, our guide warned us, “If we encounter a grizzly bear, don’t run. Just stand still and talk to it in a calm, soothing voice.” I found myself wondering how calmly our group would act if confronted by an enraged grizzly bear. Fortunately, we didn’t have to find out.

Seeing wild grizzlies was precisely why I had come to Knight Inlet Lodge, located 150 miles northwest of Vancouver, a spot so remote it is only accessible by boat or plane. I was joined in my quest by eco-tourists who came from around the world to savor the stunning scenery and wildlife during the lodge’s short season, May 30 to October 16. 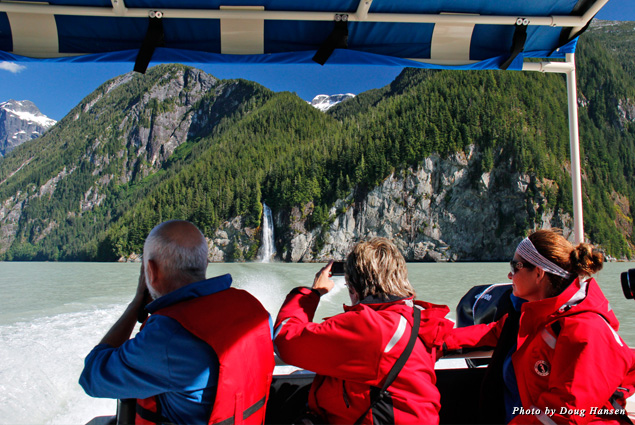 Originally built in the 1930s as a fishing camp, this one-story lodge floats serenely at the base of forest-clad mountains that tower over the milky-green, glacier-fed waters of Knight Inlet. In 1998, the new owner converted it into the first of only four dedicated grizzly viewing lodges in British Columbia.

“Three things make our lodge special,” explained Phil Bergman, the marketing director. “Knight Inlet has the best grizzly bear viewing in British Columbia; the owners are leaders in preserving the bears through their “Stop the Hunt” campaign; and the lodge runs in a totally environmentally responsible manner.” 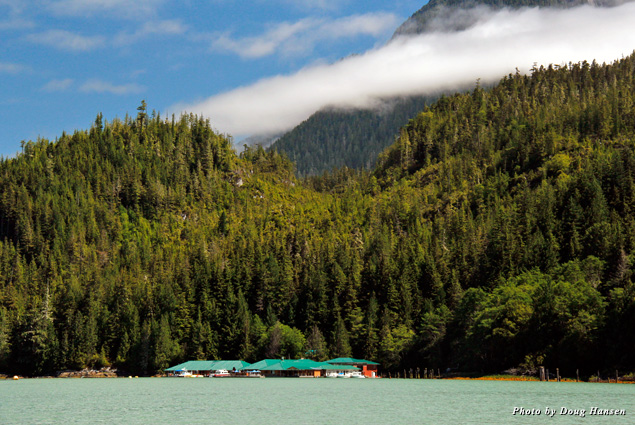 During my first visit in mid-June, my wife and I spent two splendid days at Knight Inlet. Our adventure began with a 30-minute seaplane flight to the lodge that gave us spectacular views of mountains, forests, and fjords. 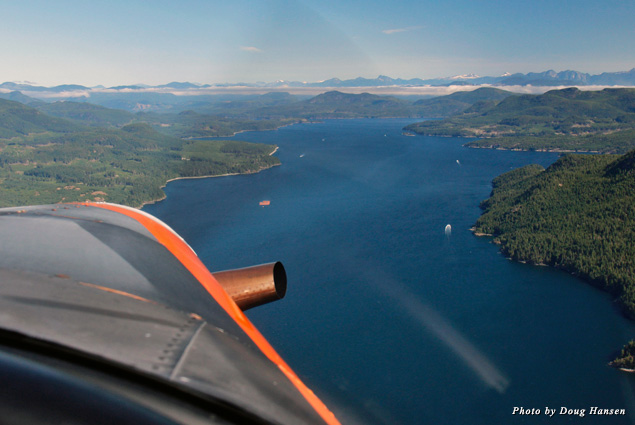 After we stowed our luggage in our modest but comfortable room, we toured the lodge with the manager, Brian, who only half-facetiously proclaimed, “Our goal is to keep you busy between meals.” No guest goes hungry. At breakfast, for example, I counted more than 20 food choices. Dinners, with ample red or white wine, were always a culinary delight.

A wide range of activities, including various hikes, boat tours, kayaking, and bear viewing, meant we were never bored. My wife and I reveled in the glorious sunshine while we hiked on the Rainforest Trail (lined with colorful banana slugs), toured the 125-kilometer inlet by speedboat, and cruised the nearby estuary watching the occasional young, lean bear feed on the tall grass (Lyngbye’s sedge) in lieu of salmon, which hadn’t yet arrived. While we thoroughly enjoyed our visit, I came away from the trip anxious to see more grizzlies during the fall salmon run. 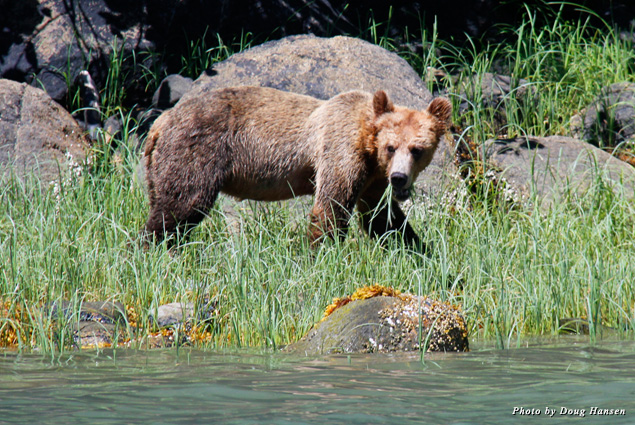 When I returned in mid-September, I noticed subtle changes: The overcast sky painted the water and mountains in silvery, gray hues, while off-white bands of clouds provided contrast as they clung to the contoured mountainsides. Gone were the purple and orange barn swallows that had darted incessantly around the lodge, feeding their babies tucked in mud nests under the eaves. They were now replaced by dozens of harbor seals that lined the protective logs floating in front of the lodge. As before, only the shrill bald eagles’ cries echoing off the steep mountainsides broke the otherwise soothing silence. 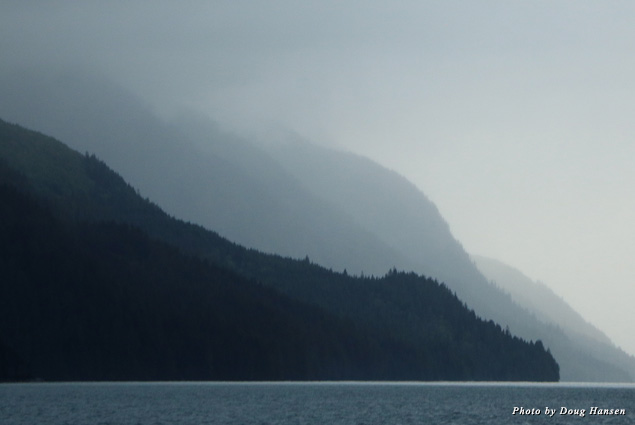 An hour after I arrived, my estuary boat tour spotted a grizzly bear, a black bear, two bald eagles, dozens of harbor seals, a blue heron, and three humpback whales. Not bad for our first excursion. But nothing could surpass the excitement I felt at the grizzly viewing stands. Cameras in hand, we quietly stood only a few dozen feet away from a procession of grizzlies and their cubs and watched as they stalked, and occasionally ate, the salmon that dared to throw themselves against the frothy rapids. During one early morning outing, my group counted 12 bears, most with cubs, encircling our viewing stand. We felt completely safe but close enough to the bears to get the kind of photos I had dreamt about. 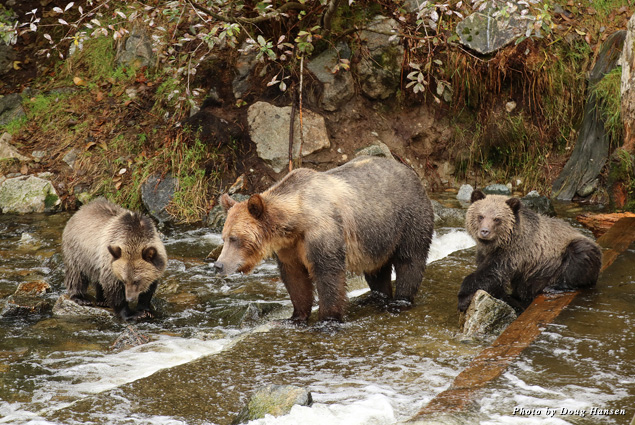 My United Kingdom-based dinner companions, Rod and Sarah Benson, best summed up why this lodge is so popular: “Everything here is so well organized. The staff is so friendly and hardworking, and we love the fun, enjoyable atmosphere. And the animals and nature we’ve seen have been beyond our expectations.”

While I have to confess that my second visit was my favorite, the truth is that anyone looking for a “nature Shangri-La” will find it at Knight Inlet Lodge. 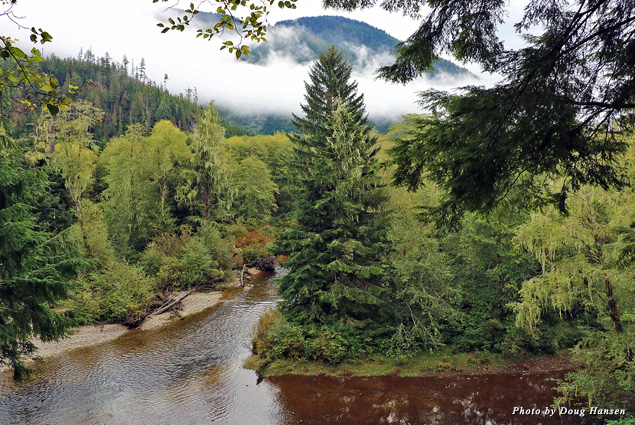