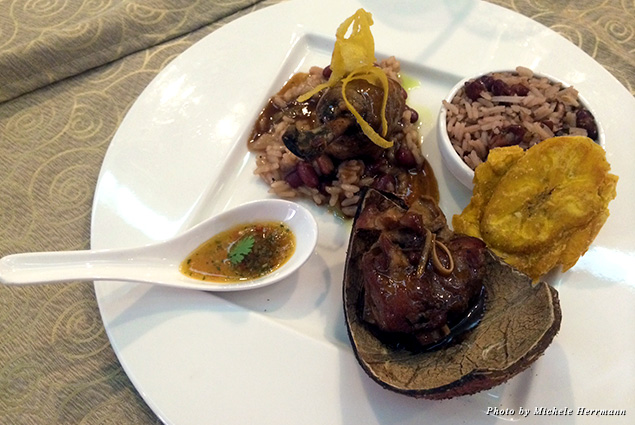 Costa Rica is often recognized for its beaches and wildlife, while its cuisine may seem like an afterthought. Yet adventurous eaters will discover the country’s culinary offerings are rich in history and flavor. In spring 2015, a National Plan for Sustainable and Healthy Costa Rican Gastronomy was launched as a recipe for promoting the use of native plants and ingredients in restaurants—for economic, environmental, and personal health benefits—and encouraging pride in what Costa Rica can bring to the global table.

Still, Costa Rica has a pretty diverse plate. Dishes involve a mix of Old World traditions and modern day interpretations, European and Caribbean influences, and now sustainable measures. And, of course, coffee is included. To see, and taste, this evolving cornucopia, visit these notable locations with a hearty appetite.

Started in May 2010 by the Amantes de lo Organico, a nonprofit organization promoting sustainable living in Costa Rica, Feria Verde (the Green Fair) is an outdoor community market held on Saturday mornings at the Sports Aranjuez in the city of San Jose. 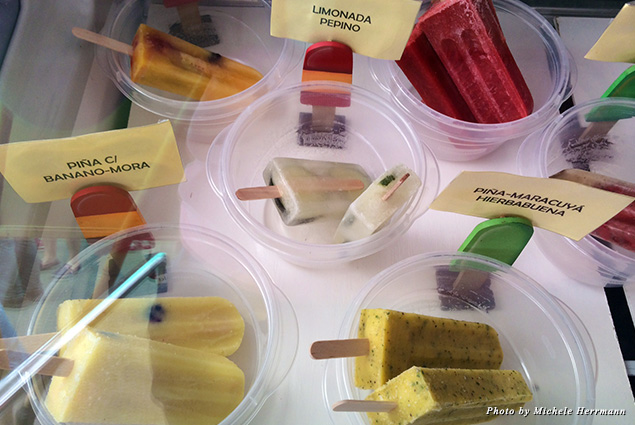 This farm-to-table marketplace in the Aranjuez district is made up of booths featuring restaurants, artisan producers, and farms selling fresh yet organic produce, breads, artisan cheeses, sauces, coffee, and even treats such as fruit popsicles. Even a morning meal can be purchased here. At one restaurant booth, find pastries or place an order for a dish such as un gallo ranchero. This breakfast serving is comprised of a fried egg, cheese, and tomato sauce on top of a tortilla. And get a cup of freshly prepared java from a vendor such as Taza Amarilla, an organic coffee farm. In July 2015, a second Feria Verde opened in Cuidad Colon and operates on Tuesday afternoons.

While Feria Verde offers an outdoor market experience, a long-timer has been providing a central point for more than two centuries. Taking up an entire block on Avenida Central, the Mercado Central (or Central Market) has been a staple in San Jose’s day-to-day living since 1880. Open every day except Sundays, from dawn to dusk, this indoor marketplace can be a bustling spot for getting groceries, lunch, coffee, or a souvenir. 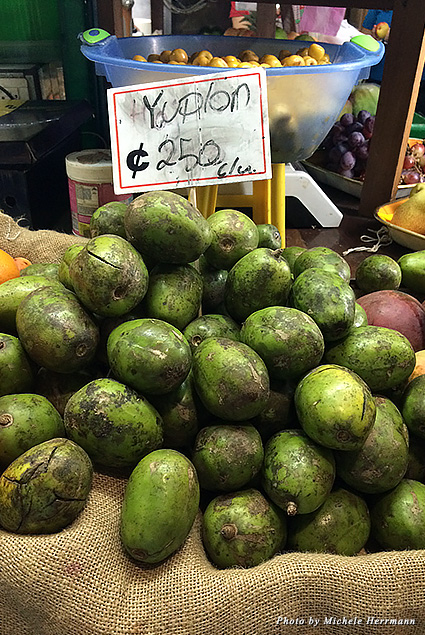 Mercado Central houses more than 200 businesses laid out in a maze of various shops, stalls, and family-owned restaurants called sodas. While walking through its alleyways, make sure not just to watch where you’re going but also what you’re passing. It can encompass everything from fruit stands, coffee shops, and spice stores to flour bins and cheese displays. There are also handbags on display and stands holding floral bouquets. And you’ll find figurines including ox carts, a national symbol that is a reminder of the past when coffee and other goods were manually transported and pulled by oxen.

Inside Central Mercado there are businesses that date roughly a century or so back and yet are still “younger” than the market itself. Since 1910, Helados De Sorbetera Lolo Mora has been dishing out its homemade recipe for sorbetera, a yellow-colored, frozen textured treat made with ingredients such as nutmeg, cloves, vanilla, and cinnamon. Its flavor is sweet with a touch of spice. Overall this sorbet is delicioso! Another venue to visit is Café Rey. Belonging to the Tapia family, this fifth generation-owned restaurant has been keeping its place in Mercado Central for 121 years and counting! Sit down at the counter and order arreglados, sandwich-looking stuffed tortillas.

At Cafe Central, you can get your java while watching coffee beans being grounded and roasted—and getting a whiff as well. While your order is being made, you might see Costa Rica’s version of a coffee pot, called a chorreador. This device consists of a basic stand with a filter that looks like a white sock in its center to hold coffee grounds. Hot water is poured into the filter and then it drips into the cup positioned below. 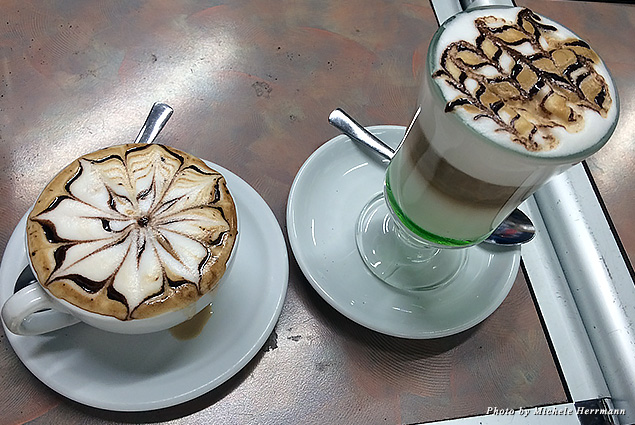 Playing a role in the national gastronomic plan, restaurants are also the place for showcasing Costa Rican delicacies while adding in some ingenuity and interpretation.

Also in San Jose, Chateau 1525 is part restaurant, part culinary school for preparing the next generation of Costa Rican chefs. Students are educated about traditional foods, various kitchen techniques, and the value of the marketplaces, and are also encouraged to experiment. Coursework includes English classes, and learning how to make certain cuts, soups and sauces, baking, and special dietary needs.

Housed in a former mansion dating back to the 1930s, Chateau 1525 holds laboratories for pastry making and craft brewing. The public can dine here as well, with lunch served Tuesdays through Fridays. During my visit, the students put on a five-course presentation that put the old (long-standing staples) with the new (chef interpretations). 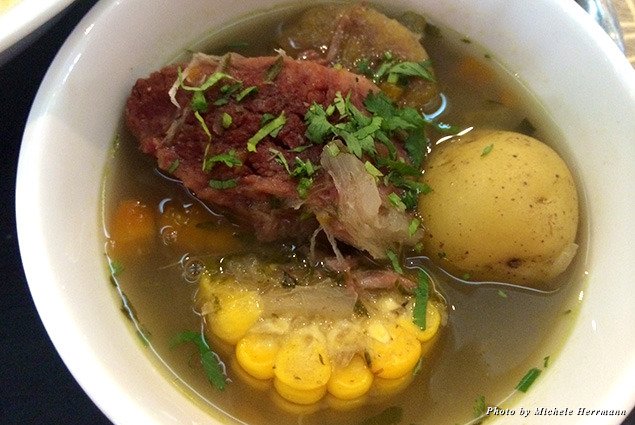 In reflecting upon the European, African, and indigenous influences reflected in the Costa Rican diet, our meal included a history lesson on gastronomic additions and various regional dishes. For example, rice and beans are essentials, and a typical dish called Gallo Pinto is served with chicken or fish. Stew also has a place, with “Olla de Carne,” a strong beef and vegetable medley, considered a nice remedy when sick (like a chicken soup). For dessert, the student chefs whipped up various treats featured at turnos (town festivals) including churros and sugared apples.

At this high-end San Jose establishment, executive chef Marco Leiva draws upon his European culinary training to create Furca’s farm-to-table experience. On a patio deck, Leiva keeps a thriving herb and vegetable garden where a range of aromatic plants provide flavoring for his dishes.

Inside Furca, near the entrance, find a glass case displaying French and Italian cheeses all made in Costa Rica. Heading toward a back wall area, there is another display case that focuses on meats. In showing my group of diners around, Leiva pointed us to this area and talked about the dry aging process for beef as well as some of the other finer cuts served including New York strip and porterhouse. And the seasoning is kept to a minimum: just salt and pepper. 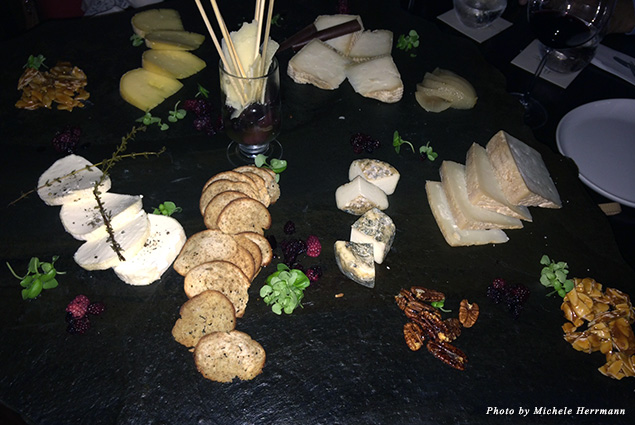 Though steak may take center stage at Furca, the menu also features the best of the countryside and ocean. On the menu you can find choices including foie gras, plus an assortment of appetizers, side dishes, seafood, and desserts. The homemade bread that starts off your meal is served with three rich spreads, and the cheese plates are nicely well portioned along with being well paired.

In Costa Rica’s San Jose area, Tintos y Blancos ushers in a taste of the Mediterranean in its wine bar setting. With a lower level dining room designed to resemble a wine cellar and a main level featuring a section where wines can be purchased, there is a bottle that can complement every course. There are about 500 varieties in stock! 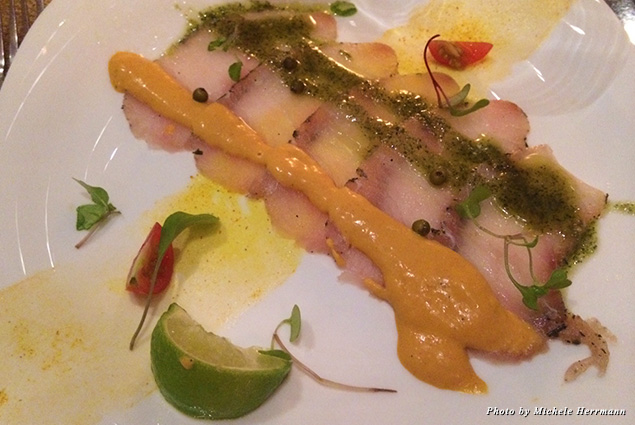 Tintos y Blancos holds live music performances, where even the head chef has hopped up on stage for an impromptu session. With lunch and dinner options, the cuisine is locally sourced. At my dinner, our four-course meal included dishes paired with Chilean and Argentinean wines (the latter a nod to the family’s heritage). Servings included a traditional risotto with plantain, coconut milk, and local goat cheese and a dessert mousse made with Turrialba cheese and foam of guava fruit.

As with restaurants, hotel properties recognize the importance of locally sourced foods for their operations. One of them is Greentique Hotels, a hospitality company that belongs to Certification in Sustainable Tourism, a conservation program centered on instituting eco-friendly measures in the hotel sector. Its property near San Ramón de Alajuela in Los Angeles Norte, Villa Blanca Cloud Forest & Nature Reserve, is a prime example. It is next to a working dairy farm and has an organic vegetable greenhouse that supplies herbs and produce for its on-site restaurant.

About a 20-minute drive from San Jose International Airport, Finca Rosa Blanca Coffee Plantation Resort has an adjacent organic coffee plantation that harvests about 300 bags of shade-grown beans annually. Guests can take a guided tour of this 30-acre plantation and learn about the entire production process, from picking ripe cherry beans to separating and sorting and then roasting beans. Back at the inn, guests finish the tour with a tasting to get a sense of how different roasting times impact flavors. In addition to growing coffee, Finca Rosa Blanca staff members manage a greenhouse, raise chickens, and implement a vermiculture-based composting system to recycle organic waste. 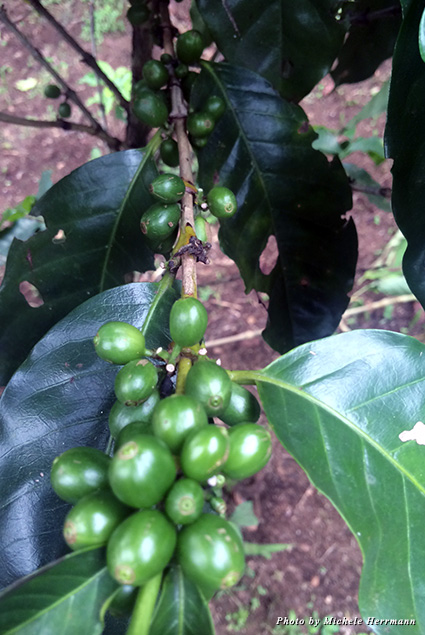 Another place of stay to consider is Monte Azul, a boutique hotel said to be the only one with an artist in residency program. Located in a private reserve in the Talamanca region, the hotel also produces a line of French and Italian cheeses made from the milk of goats raised on the property. The gourmet cheeses are also fitting of Costa Rica in that the goats feed in the forests, so cheese can incur a bit of a tropical tanginess, so to speak.