Garden of the Gods: A Divine Reason to Go Outside 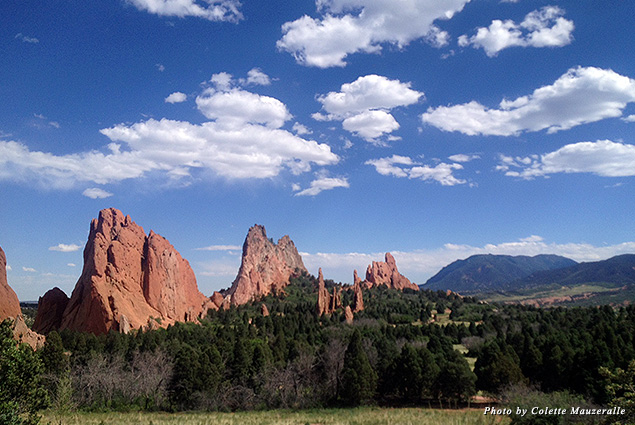 At the western edge of Colorado Springs lies a 1,364-acre public park famous for otherworldly rock formations that attract more than two million visitors each year. Garden of the Gods, designated a National Natural Landmark in 1971, is a land of sharply rising sandstone and boulders complemented by more than 15 miles of multi-use trails. Though Colorado is overflowing with gorgeous landscapes, there is nothing else quite like this “garden.”

Upon your arrival, head to the Garden of the Gods Visitor and Nature Center, built in 1995 at the park’s eastern portal. Here, grab free trail maps and park information, then ready yourself for a bit of education via numerous exhibits and an oft-repeating film on local geology. Visitors can also learn about park programs, from guided nature hikes to Junior Ranger programs, group tours, and more. A café and a gift store are on site, and before leaving the Visitor Center one must stroll along its west-facing balcony for panoramic views of the park. 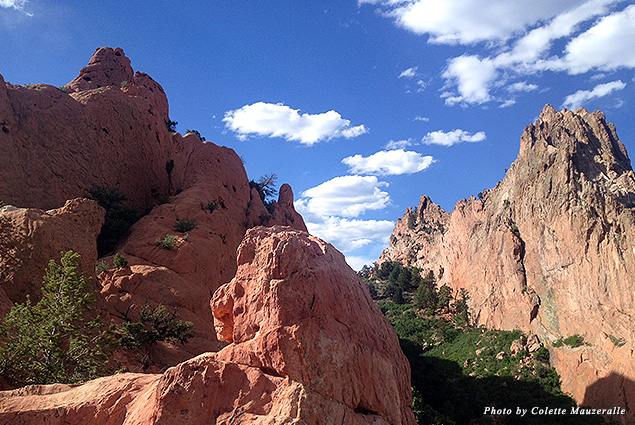 And then, it is time to explore. Throughout most of the park, cars follow a single, one-way road, meaning getting lost is nearly impossible. Several trails feature parking lots at their trailheads, and once out of the car and into the wild, paths are clearly marked and easily navigable. Should you want assistance finding your way around, guided walks that shed light on various topics, from wildlife to history, are led each day at 10 a.m. and 2 p.m.

The park’s main route is the Perkins Central Garden Trail. At slightly more than one mile roundtrip, this paved (think: wheelchair and stroller accessible) path crosses gently through the park’s heartland. Farther in lie more “au naturel” routes including the Ridge Trail, known for giving hikers an experiential feeling of climbing through the rocky terrain, though this half-mile loop rises only 100 feet. The Siamese Twins Trail is another easy loop popular for its view of Pikes Peak, one of Colorado’s famous “fourteeners,” seen through a natural window toward the top of the trail. Visitors may also opt for the Chambers-Bretag-Palmer Trail, a three-mile path encircling the park. Beyond these popular options are additional hiking paths, each offering their own distinct views. 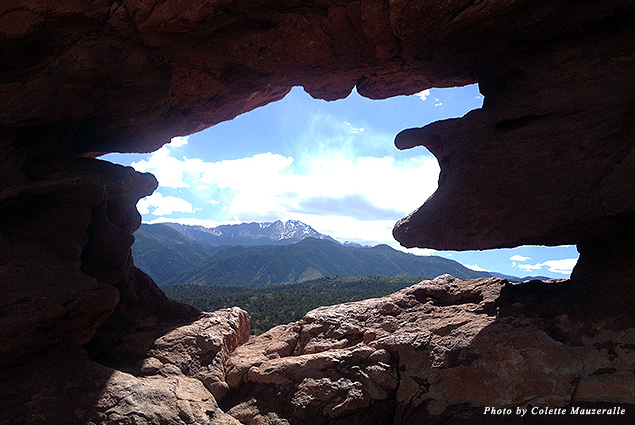 Extremely outdoorsy types visiting Garden of the Gods will appreciate the chance to partake in rock climbing, with permits available for purchase at the Visitor Center and climbing permitted only in dry conditions; deaths have occurred when climbers have tried climbing the unstable sandstone in wet conditions. Horseback riding is also popular within the park, with cowboy-led trail rides offered by Academy Riding Stables and designated trailer parking for those hauling in their own equines. Mountain bikers are welcome as well, and paved bike lanes are present within much of the park. 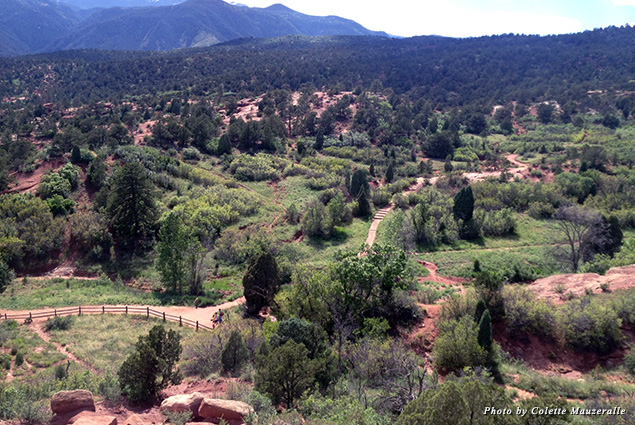 Whether on foot, wheels, or horseback, guests should be sure to pay special attention to the Garden of the Gods’ most prominent formations. One of the most photographed features is Balanced Rock, a red-hued stone famous for its precarious perch—the result of years of erosion. This and other rocks within the park are must-snaps for camera carriers, who will also want to check out upturned towers such as Gateway Rock and Three Graces. Beyond these are structures including the Towel of Babel, formed from the sands of prehistoric beaches, and many more with names like Snakehead Rock, the Kissing Camels, and the Sleeping Giant.

These strange red and pink sedimentary rocks, most often sandstone, are the result of a few geological factors. Pre-ice age, materials were deposited horizontally; however, their proximity to the same fault line that formed the Rocky Mountains as well as the Pikes Peak mountain chain led to massive overturning and, more or less, disarray of a once gentler landscape. Glacial erosion during the Pleistocene ice age, which ended around 11,000 years ago, also led to further shaping of geological formations within the park, which include ancient seabeds, sand dunes, and more. 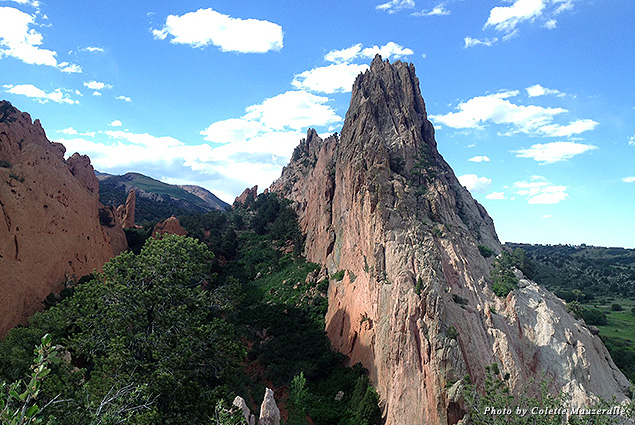 The recorded history of the Garden of the Gods goes back further than one might guess, to the Cretaceous period. In fact, a new species of dinosaur dating back 125 million years—its bones discovered in 1878 by geology professor James Kerr—was announced in 2008. The dinosaur was given the name Theiophytalia kerri, Latin words that roughly translate to “belonging to the gods’ garden,” and a cast of its skull can be viewed at the Visitor Center. To this day it is the only dinosaur of its kind ever found.

The land within the park was first visited by people around 1300 BCE and began attracting early Native American tribes around 250 BCE, a result of the area’s abundant resources and natural rock shelters. Tribes including the Cheyenne, Apache, Ute, and many more report having a connection to the area.

European explorers first traveled through in the 16th century, and until 1859 it was popularly called Red Rock Corral. The park’s current name is the result of surveyors M.S. Beach and Rufus Cable, who, together, came to the conclusion that the area would be the perfect place for not only a beer garden but also a fitting locale for the gods to throw their divine shindigs; thus “Garden of the Gods” was born. 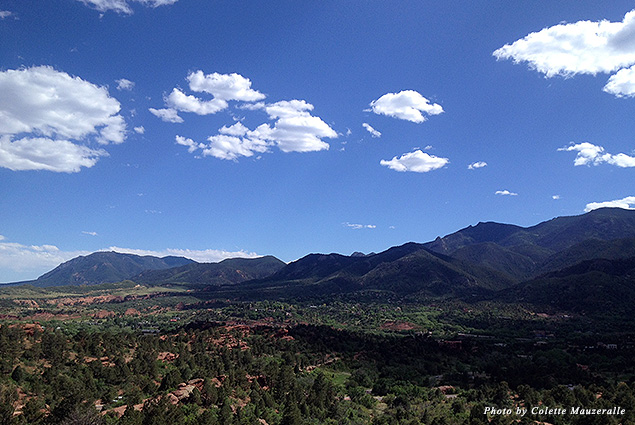 The modern day Garden of the Gods began as a 480-acre, privately owned summer estate for Charles Elliott Perkins, though he never built on the property, as he preferred its natural appearance. In 1909, two years after his death, Perkins’ children gifted the land to the city of Colorado Springs and it officially became a public park. The city combined the estate with adjacent land to form the park’s current boundaries, tripling its size, and in 1995, it welcomed the addition of the Garden of the Gods Visitor and Nature Center.

Wildlife is abundant in the park, and it is within Garden of the Gods that a new species of honey ant was discovered in 1879. Of course, visitors are more apt to keep their eyes peeled for bigger game including elusive bighorn sheep and mule deer, which graze under skies shared by more than 130 types of birds, from cheerful swallows to predatory hawks and falcons. 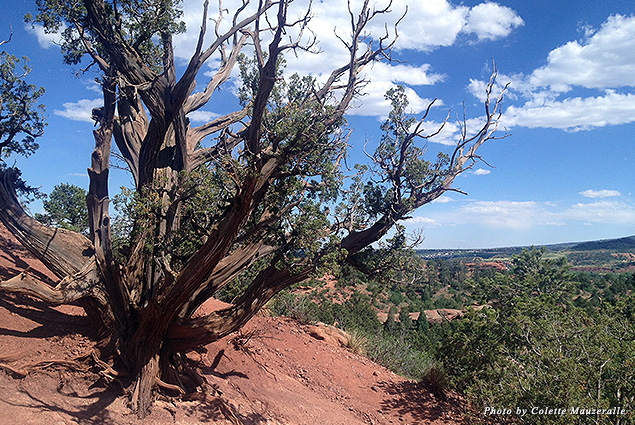 While Garden of the Gods is ideal for exploring, this is Colorado and seasons apply. Winter can be a viable choice with plenty of sunshine, though visitors should be prepared for chilly temperatures and snow. At the opposite end of the year, precautions should be taken against the summer heat as well as afternoon thunderstorms that roll in rather quickly during July and August.

No matter the season, Garden of the Gods is certainly a place to carry your camera, as the landscape seems to change at every step. With its modern, multi-faceted visitor center and miles of trails winding through some of North America’s most interesting topography, Garden of the Gods is a destination for stunning views from up close and afar.