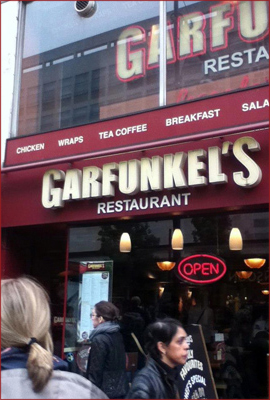 People always say that the best way to learn a new city is to get lost in it; I’ve never been one to agree with that, filled with anxiety and apprehension over getting lost in any unknown place. However, after spending the evening walking aimlessly around Piccadilly Circus and Soho, I strongly recommend London as being the city to get lost in, and Soho being the place to do it.

After eating (a fairly expensive burger for what I actually received, go for the Cottage pie instead) we headed west down Pall Mall past the National Portrait Gallery, and up Haymarket toward Piccadilly Circus. However, if you decided to go from Tottenham Court Road tube station, you can head south and you will run right into Soho as well.

Most of my mates have referred to Soho as the gay-friendly part of town, and while it is evident as you make your trek through Soho, it needs to be clearly stated that it is by far one of the most liberal-minded/free-thinking parts of the city and should be appreciated for that fact alone. In the daytime, I recommend doing the same walk around Soho and scoping out the different media and production houses in this area, stopping at one of the many coffee houses or pubs to watch the trendy passersby.

The Friday-night scene in Soho is so vibrant that you can’t go wrong when picking a place to go out. As we were walking down the streets in Soho, passing the square on the way to Tesco, the streets and restaurants were filled with extravagantly dressed men, older couples walking back from Chinatown, families (including small children) leaving restaurants, and London’s scenesters headed for the Intrepid Fox.

If you are in the mood for a pub, try visiting the Devonshire Arms or Coach and Horses. Bars and clubs go a bit differently in this area- one street will be loaded with sex shops, strip joints and the ultimate raging gay bar, but the next street will have trendy clubs with London’s scantily clad giving bouncers their name for the exclusive guest list. The beauty in Soho is that there is so much diversity it is near impossible to not find a good match for your night out.

Madame Jojo’s at 8-10 Brewer Street is a world-famous cabaret bar/club worth checking out. Punk at 14 Soho Street, off of Oxford Street is also a place worth visiting and has been known to host the likes of Kate Moss and Lily Allen. A mate of mine enjoys Moonlighting at 17 Greek Street, which is a nice spot for students to chill. The Edge at 11 Soho Square, Ku Bar at 30 Lisle Street, or Shadow Lounge at 5-7 Brewer Street are great places to enjoy the best of the LGBT scene in London.

The thing about Soho is that it is situated a stone’s throw from Piccadilly Circus- one of London’s best areas for going out – but what Soho offers is a more diverse and lively scene. If that kind of crowd isn’t your thing, I would still recommend checking out the area at least once, making friends, watching the debauchery that ensues, dancing the night away, and returning home with your mind blown by the level of intensity you have just experienced.