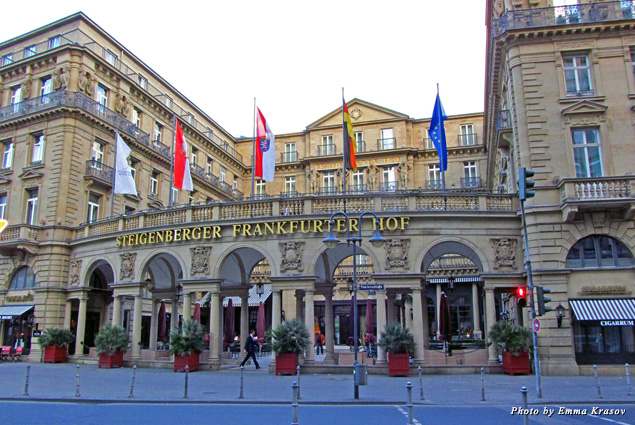 Many tourists come to Frankfurt, Germany, for a layover at its massive international airport, while businessmen from all over the world flock to the financial capital of Germany to conduct their operations. Meanwhile, Frankfurt am Main bears its own cultural and historical significance, offering an array of unforgettable experiences.

The grand hotel Steigenberger Frankfurter Hof greeted me with its classic European ambiance. Founded in 1930 by Albert Steigenberger and run for decades by his descendants, the massive hotel is decorated with period furniture, paintings, tapestries, and porcelain from the family’s art collection. 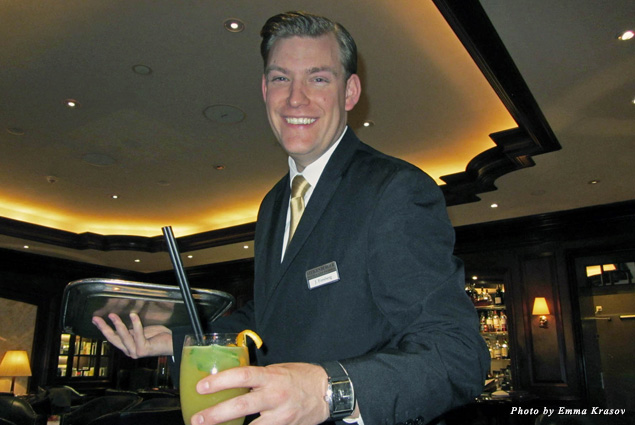 I took my sweet time at Autorenbar (the Author’s Bar), a place for book signings and literary discussions. There were no authors at the bar (besides myself), but there was a glass of house-made lemonade of black and green teas steeped with lemon and orange slices and fresh mint leaves.

Despite this refreshing drink, the moment I arrived in my room, with its high ceiling, wood panels, and heavy plush curtains, I was tempted to curl up on the bed and nap for the next 12 hours. I got a hold of myself upon drinking espresso from the in-room coffeemaker.

I dressed up for dinner at Villa Merton, a two Michelin-star restaurant led by the celebrity chef Matthias Schmidt, born in Frankfurt and dedicated to the local, seasonal cuisine.

The chef works with local farmers, forest rangers, and fishermen and puts on his guests’ tables culinary creations made with dandelion buds, spruce sprouts, and radish fruit.

There are no peppers, olive oil, citrus, coffee, chocolate, or other things that are not local in the chef’s kitchen. There are, however, plenty of German vegetables and herbs, fish and game, regional cheeses, bread and butter from the organic Dottenfelder Hof farm, and Luisenhaller salt from the Baltic Sea.

“I work on regional dishes you can’t eat anywhere else,” said chef Schmidt. “It’s good for our bodies, and it’s good for the planet.”

With creativity and dedication invested in every morsel, sometimes arranged with tweezers, each plate served at my dinner looked like an art piece and contained wonderful surprises. 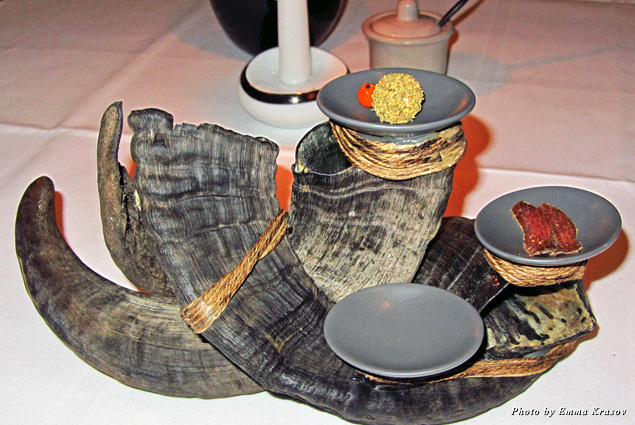 A quail egg was served in a nest of raw potato shavings. A tiny smoked piece of wild goat meat was garnished with a bead of goat cheese dusted with elderberry flowers and a rowan berry. The dish was served on a construction of the animal’s horns.

Jerusalem artichoke with sunflower oil was colored with charcoal and garnished with chickweed and frozen horseradish.

The next morning, after an excellent breakfast at the hotel’s Hofgarten restaurant, I was ready to explore the city.

My tour guide started with the introduction of “Mainhattan,” a banking district known for its skyscrapers.

“People come from all over the county just to look at them,” she said. “Even in Berlin and Cologne there is nothing like these.” Then she looked at me and said, “Well, you are from America, you might not appreciate them.” But I did appreciate them! Especially after she explained to me the asymmetrical forms of the buildings dictated by the German law that requires all workplaces to have access to daylight. I was further impressed by the building’s other features, such as natural air conditioning and solar panels.

We stood at the edge of Rossmarkt looking at the Gutenberg monument, which was constructed in 1858 by Eduard Schmidt von der Launitz. The inventor of the printing press, Johannes Gutenberg, who lived in Frankfurt in the mid-15th century, shares the monument space with his collaborators, Peter Schöffer and Hans Fust. The four allegorical figures of theology, poetry, natural science, and industry sit by their feet, representing the main reasons for printing. 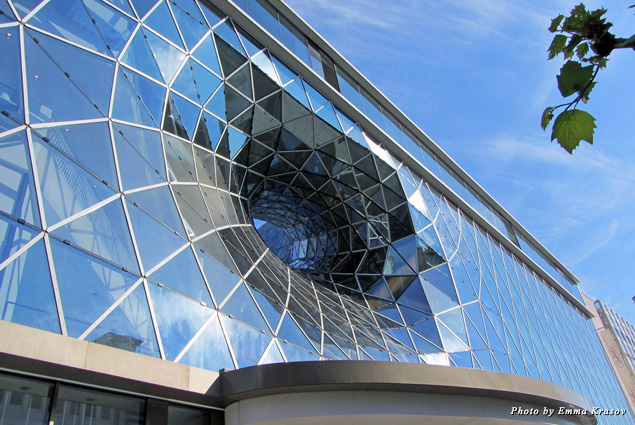 The most impressive contemporary building nearby with a dazzling glass funnel in the middle of its window-wall is one of Germany’s most popular shopping centers, MyZeil. Its multiple floors are flooded with natural light, enveloped in a no-hard-corners hallway-escalator system, and provide shopping therapy with regional and international labels to 13,000 shoppers a day.

From here, a short walk away is Goethe-Haus, the birthplace of Johann Wolfgang von Goethe—the genius poet and playwright, notorious womanizer, and anti-cleric scientist. Born in this house “On the 28th of August 1749, as the midday bell struck twelve…” he spent many years here, writing his masterpieces, “The Sorrows of Young Werther” and the beginning of “Faust.” 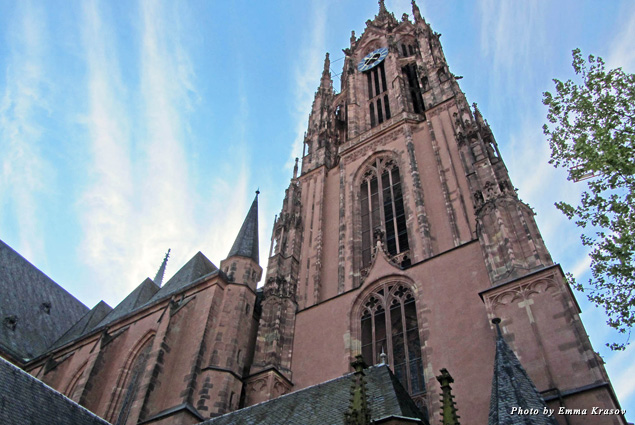 We walked by the dark and imposing Frankfurt Cathedral, with its 95-meter spire. Properly called Dom St. Bartholomäus and built in the 15th century, it became a site of the elections of 25 and the coronations of 10 emperors of the Holy Roman Empire and kings of Germany, since Frankfurt was a major city of the empire.

On our tour I learned about more than 100 city museums and enjoyed a well-curated show, “Esprit Montmartre,” at Schirn Kunsthalle, one of the most recognized art exhibition institutions in Europe. Early paintings by Van Gogh, Degas, Toulouse-Lautrec, Picasso, and other modernist iconoclasts were presented here in historical and cultural context of the era. 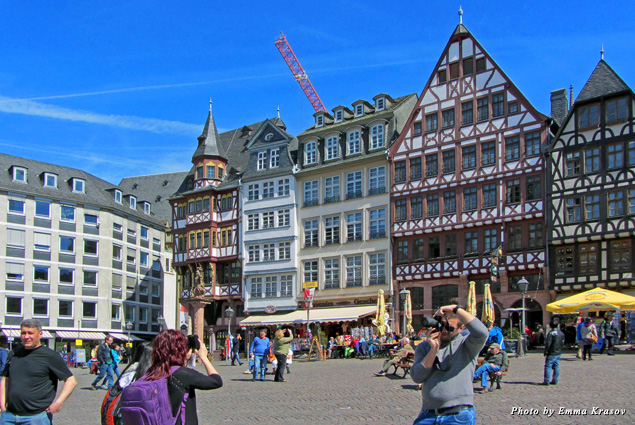 At the Römerberg square, we stopped by the world-famous statue of goddess Justitia at the top of the 1543 Fountain of Justice. At times of coronations, the fountain was filled with wine, which resulted in damage to the statue several times throughout its history. After many repairs and replacements, a Frankfurt wine merchant installed the current bronze statue in the 19th century. The goddess is lacking her traditional blindfold. “She needs to keep an eye on the city hall,” joked my tour guide. 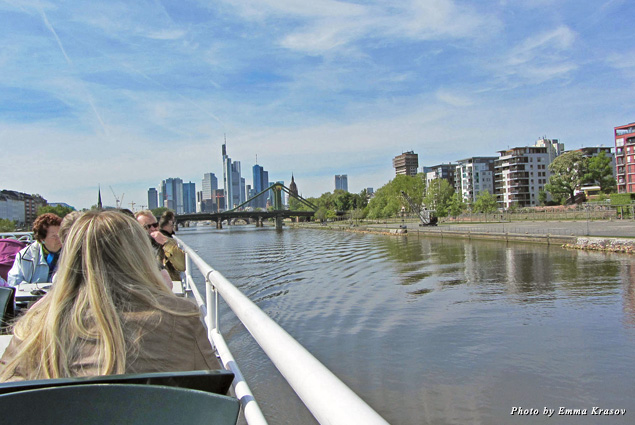 We proceeded past Frankfurt museum embankment along River Main, with museums of art, architecture, film, communication, world cultures, applied art, Jewish history, children’s activities, etc., and boarded a Primus Linie cruise boat for a seasonal overview of the city’s gorgeous skyline and its many bridges.

That night, true to my principle to eat local in any location I happen to be, I had a traditional dinner at the overcrowded Apfelwein Wagner. Seated at a communal table next to healthy eaters devouring lamb shanks and pork knuckles, I had that sweet and tangy apple wine—Frankfurt’s most popular beverage, served in a traditional Bembel jug—my new favorite, just like the city itself.