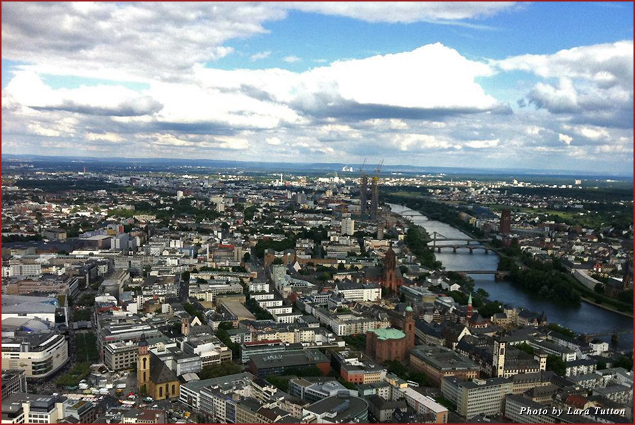 There are city breaks, and then there are micro city breaks. My first visit to Frankfurt, one of the largest cities in Germany, fell into the latter category, with just 48 hours between my arrival and departure back to London. Could I take on Frankfurt in just one weekend? I saddled up, ready to brace myself for 48 hours in the city. 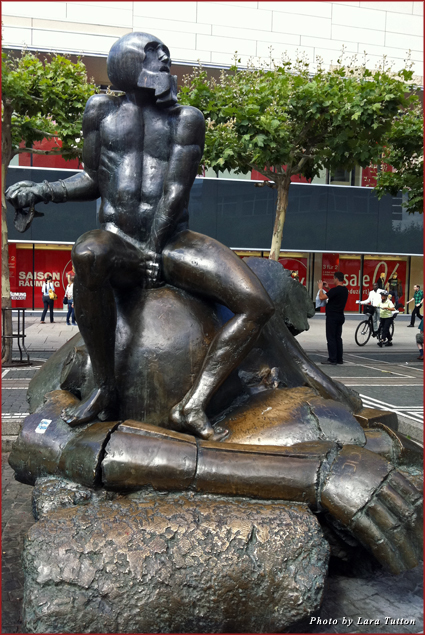 My first morning in Frankfurt greeted me with beautiful sunshine, and I was filled with anticipation as my boyfriend and I headed out to explore the city streets. Not dampened by the tequila cocktails we had enjoyed the night before in a Mexican restaurant on the periphery of the saucy Red Light District, I soon realised that in Frankfurt the only way to look is up. What is so striking about the city is its newness. Bombed heavily by the Allies during the World War II, much of the old city was destroyed beyond repair leaving it a blank canvas for post-war architects. But what Frankfurt lacks in age, it makes up for in style. The well-groomed streets of the city are pitted with surprise sculptures that delight with their humorous and playful subjects, and even the quickest glance up at the skyscraper-heavy skyline will reveal a number of architecturally innovative and fascinating buildings. 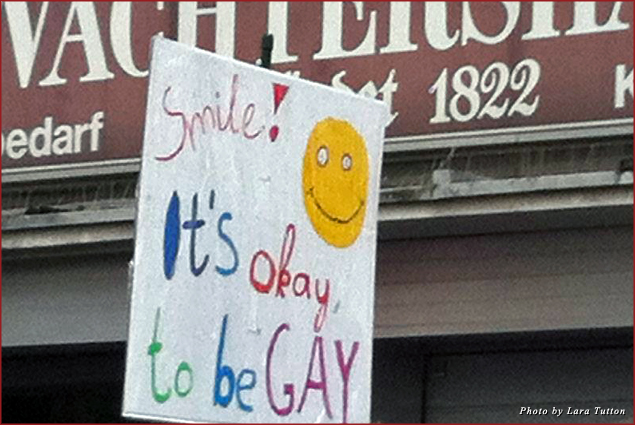 Frankfurt is a bustling financial centre, and on this Saturday morning the central streets were teaming with life, teenagers, couples, and families alike coming out to bask in the sunshine. But little did I know these crowds had been lured out to enjoy the spectacle that is Frankfurt’s annual Gay Pride parade. Wild, colourful, and above all terrifically fun, this wonderful spectacle boasts the title of the biggest Gay Pride in Germany and one of the best attended in Europe. Floats blaring pop music and favourite camp classics made a route through the city, with thousands of participants from Frankfurt’s LGBT community, many of them in flamboyant costume, keeping up an infectious party spirit that had all onlookers dancing and singing along, eager to join in the celebration. 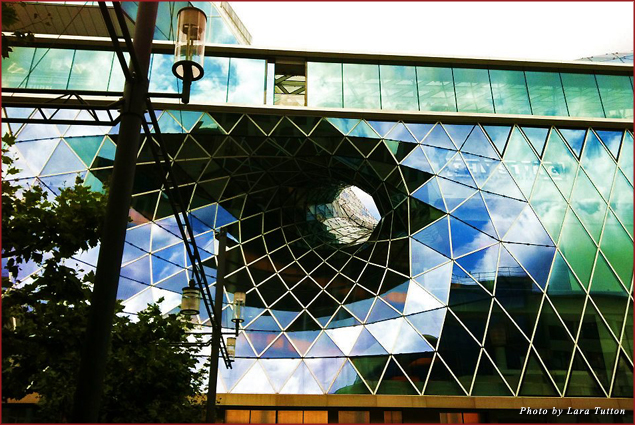 After a few hours spent soaking up the carnival atmosphere, as the lengthy and lively procession passed our spot in Der Roβmarkt we moved on to the heart of city, Frankfurt’s principal street, Zeil. Known as one of the busiest shopping streets in Germany, Zeil is much more than a place to shop; it is a beautifully designed spacious avenue lined with greenery, street performers, and sprawling cafés teaming with life. On this sunny Saturday Zeil had a real buzz to it, as Gay Pride goers flocked to stalls selling semi-gourmet street food. Bubble tea cocktails (both alcoholic and virgin) were available to go, but I plumped for a glass of strawberry-spiked Prosecco to enjoy as I strolled past the astonishing MyZeil mall. Forgot everything you know about shopping malls, MyZeil is like no other. Designed by the innovative Massimilano Fuksas, it is a piece of art in its own right. With a gigantic hole running straight through the glass façade of the building and the interior of the mall, it is one of the city’s most impressive feats of architecture. Inside MyZeil, keen shoppers can find everything from fashion and beauty to Lego and art, but with the sun high in the sky there was no time for a shopping trip. 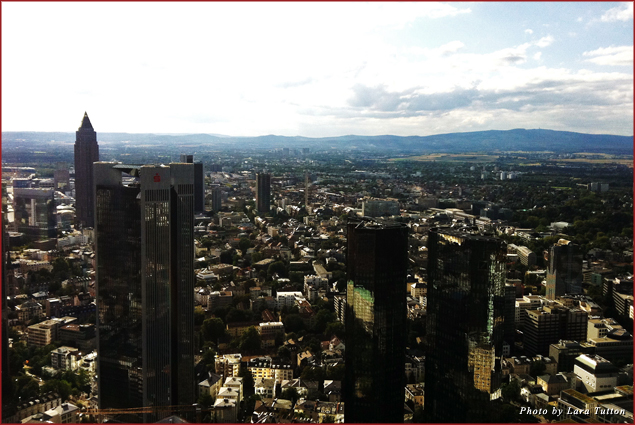 Instead we headed from one architectural wonder to another, the Main Tower. Not one for those who suffer from vertigo, the tower’s expansive, open-air viewing platform is on the 56th floor, 656 feet above the ground. While the Main Tower is not the tallest building in Frankfurt (it’s both fourth tallest in the city and in Germany as a whole), the view from the top is nothing less than breathtaking. Visiting on a clear and bright afternoon, we took in a panoramic view that stretched miles into the distance until the landscape met the horizon, reaching beyond the parameters of the city to the tidy suburbs and the acres of countryside around it. For me, the most impressive skyscrapers of the city have to be the incredible Die Welle (the Wave) building which curves in and out like the body of a dancer and the imposing Deutsche Bank towers, their reflective black glass gleaming in the sun. When seen from this height, the cityscape is a like an open-air art gallery composed of living, breathing works of creativity and beauty that just so happen to be buildings, an must-see site for any visitor. Still astounded by the dizzying heights and incredible sights from the very top of the Main Tower, as the sun set, we lay back on the grass of the Wallanlagen Park, a luscious retreat nestled between the city’s skyscrapers, taking in the dizzying heights of the city we had just enjoyed, only this time from a worm’s eye view. 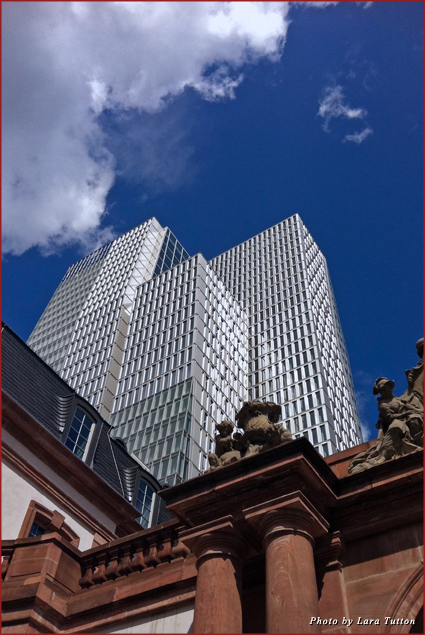 The next day began with a considerably slower-paced start. The night before we had discovered Luna Bar, an opulent after-dark venue famously rated the best cocktail bar in Germany by none less than the hedonistic Playboy magazine. An evocative, sophisticated bar oozing 1950s glamour, Luna Bar’s drinks menu is the largest and most impressive I have ever seen, offering every cocktail I could think to imagine. Naturally, I was seduced into ordering a sage gimlet, ginger julep, and several delicious variations of coladas, including the Bellevue and the utterly delicious, if ridiculously named, Flying Kangaroo. Now, nursing our hangovers, we took a Sunday morning stroll before selecting a typical German café for brunch. Sitting al fresco, we joined the café’s all German cliental to watch the Grand Prix on a large outdoor screen while drinking a stein of pilsener and a currywurst (the German staple pork sausage served inside a bun and smothered with curry sauce). I took my first gulp of my pilsener as Michael Schumacker completed his first lap; it was not la dolce vita, but it was most certainly the German equivalent. 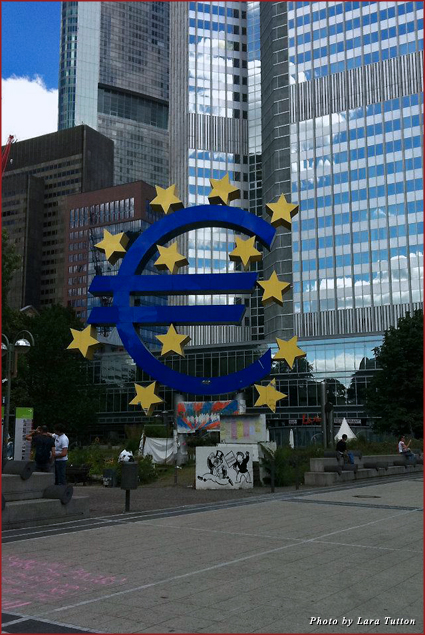 At length, and with great reluctance, we prized ourselves away from our second round of steins and wurst and allowed ourselves to get lost amongst the city’s streets. We were lucky enough to find ourselves in the lap of the Occupy protest camp based in the heart of Frankfurt’s financial district, just ten days before the camp would eventually disband. The financial heart of the thriving super-power of Germany, Frankfurt provides a particularly salient background for the Occupy movement, of which the base here was the largest in the world at that time. This colourful tent-city camp abounded with anti-capitalist artwork, cheeky and irreverent slogans, and thought-provoking banners. There was a real sense of community spirit and solidarity here, as protesters gathered together in communal spaces to share ideas, sing songs, and even just cook a spot of dinner. It was proof, if any were needed, that even though it might be a corporate city, Frankfurt has a lot of soul. 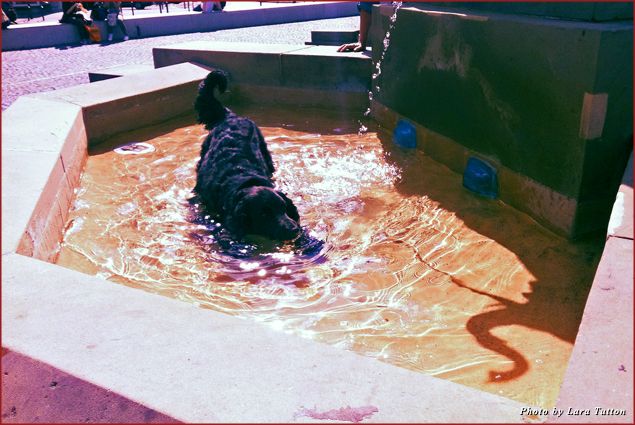 As the afternoon drew in, signalling my last few hours to be enjoyed in the city, we strolled to nearby Goetheplatz, a gorgeous, sun-drenched square that honours the late, great German poet Johann Wolfgang von Goethe, author of the tragedy Faust among many other notable works. We sunbathed on the steps of a the square’s iconic, monumentally proportioned stone fountain, taking in the view of the majestic Goethe statue as we people-watched and snacked on wurst. Damen und Herren—ladies and gentlemen—it doesn’t get more German than that.

Germany: Kings and Castles of the North Frankfurt Is Not Just for Changing Planes