Formula One Races Through Valencia 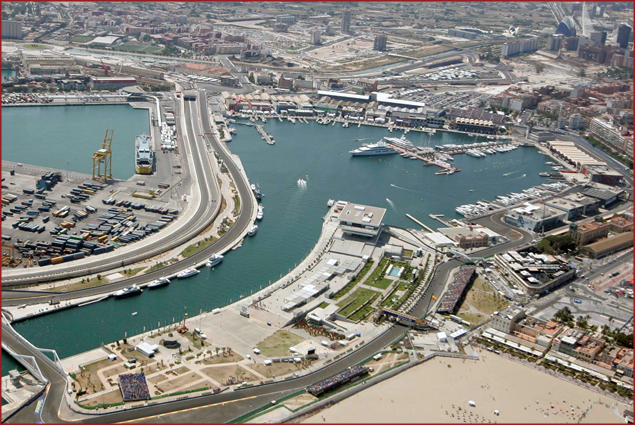 More than 85,000 spectators are expected to gather this year to watch the Formula One race in Valencia, Spain. The three day event begins June 25, with practice rounds, and continues through June 27 , for the main event. Four Grand Prix champions will compete this year – Fernando Alonso, Michael Schumacher, Lewis Hamilton and Jenson Button. Get ready for lots of excitement, as the race cars roar past the old river of the Turia and Valencia’s impressive harbor, at speeds up to 200 miles per hour!

World renowned race course designer Hermann Tilke was brought in to create the Formula One track. What were once the streets of Valencia are now being compared to Monaco’s circuit, with its 3.4 mile-long track boasting 25 curves winding along the city’s waterfront and over the 459 foot-long Swing Bridge, connecting the two sides of the harbor.

Spain’s lovely Mediterranean coast certainly is a popular spot for sporting events. In addition to hosting the Formula One race for three years in a row, it has also been the site for this year’s America’s Cup, the World Superbike Championship, the IAFF’s World Indoor Athletics Championship and the MotoGP World Championship.

Valencia has plenty to offer visitors during their stay. Get your fill of culture with Baroque and Renaissance monuments in the charming old quarter, or visit the Museo de Bellas Arts, IVAM contemporary art museum, and modern City of Arts and Sciences. After an afternoon of exploring, it’s time to relax. Bask in the sun on the beautiful beaches and sample some mouth-watering cuisine (think paella!).

Ticket prices range from $61 (for Friday) to $734 (for the three-day weekend). Some lucky 2,000 fans with the weekend pass will have the opportunity to join the “pit walk” on Thursday, June 24, where they will have access to the pit lane, view the cars, and even meet the Formula One drivers! Traveling in style on your own yacht? Spectators also have the option to view the race from the water by docking their yacht in one of the 125 moorings reserved in the marina.

Visit Comunitat Valenciana for additional information on the region of Valencia.