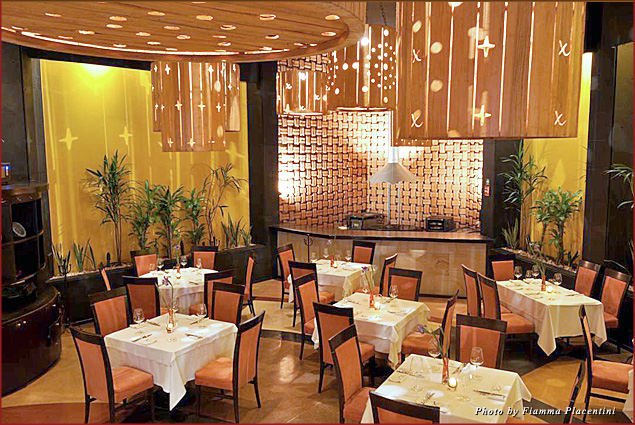 What gringos north of the border think of as Mexican food Chilangos, residents of Mexico City, disdainfully dismiss as Tex Mex. So where do Chilangos go out for dinner? Amid rumors of nouvelle cuisine to rival Michael Mina, an Italian kitchen better than a Roman holiday, and volcanic Mexican concoctions, four foodies invaded Mexico City for a weekend feeding frenzy. On our list were two cutting-edge restaurants, Paxia and Pujol; an Italian restaurant, Rosetta; and a wildly colorful Mexican restaurant, La Chilanguita Centro. 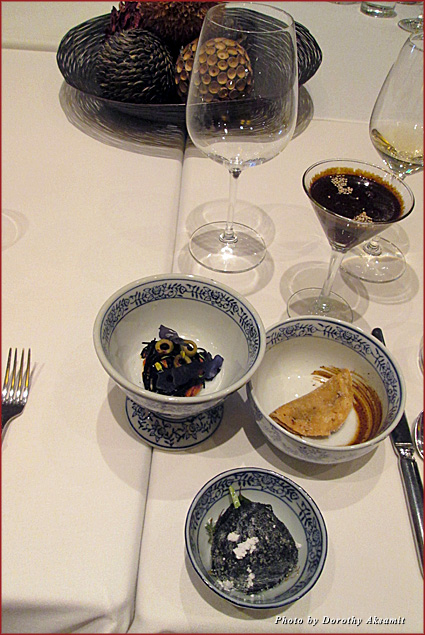 We were eagerly anticipating our visit to Paxia, our first foray into nouvelle cuisine, Mexican-style. At Paxia, multi-talented chef Daniel Ovadia scours every region of Mexico searching for native ingredients to interpret in a new, lighter way. Paxia (which means “peace” in Nahuatl) is a small, dimly lit restaurant set on two levels: the bar and entrance on the first level and the restaurant below with an open prep bar at one end.

We first noticed the precision of the wait staff. There were eight people at our table, and four waiters with two plates each would appear at once so everyone was served simultaneously. Menu degustacion pasion: “Cocina Mexicana” is a small-plate sampling of a dining experience designed to last a couple of hours and showcase architecturally constructed presentations with a wow factor. 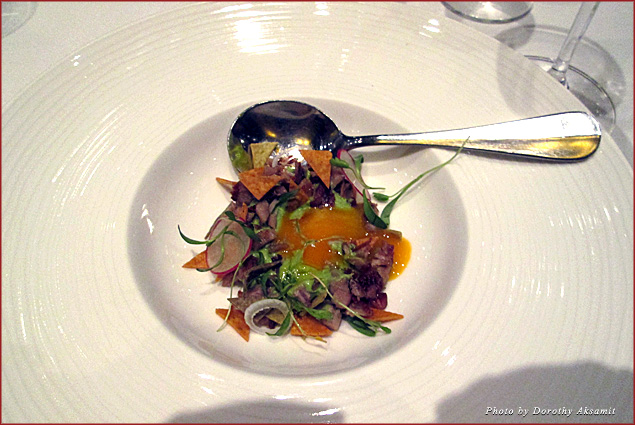 The first of a succession of small plates contained a tiny blue tortilla resembling a clamshell that hid white clams served with edible embers, lentil salsa, lemon wedges, and a serrano pepper mole. The blue tortilla shell evokes the traditional method of steaming clams on the beach, and the mole, served in a martini glass, is a thoroughly modern touch. 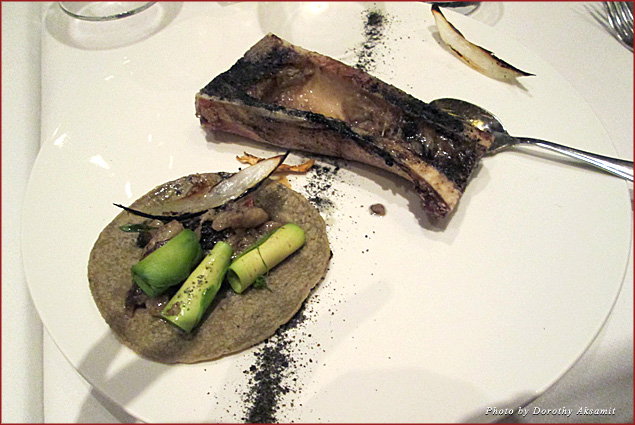 The most intriguing course was a carefully crafted nest containing small slivers of suckling pig, avocado, tortillas, radishes, and peppers. Hidden in the middle was an egg yolk that broke as you cut into it, melding the flavors together. 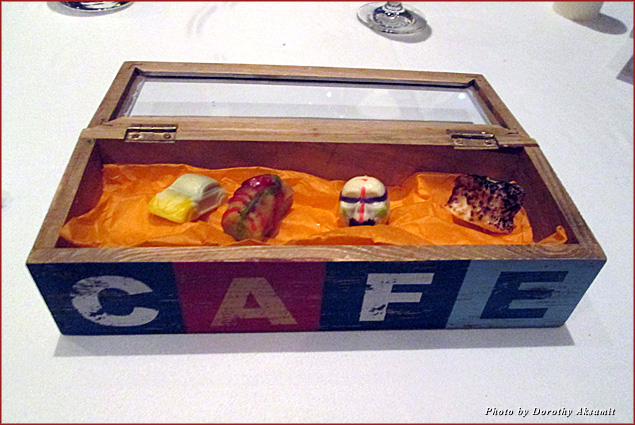 But the table favorite was baked bone marrow (with the bone split lengthwise) with a reduction of burnt onion and accompanied by three salts (each a different color and from a different region), served with a blue tortilla.

The meal ended with a flourish as an infusion of herbal tea was brewed at the table and served with a cocktail of coconut cream and mescal. 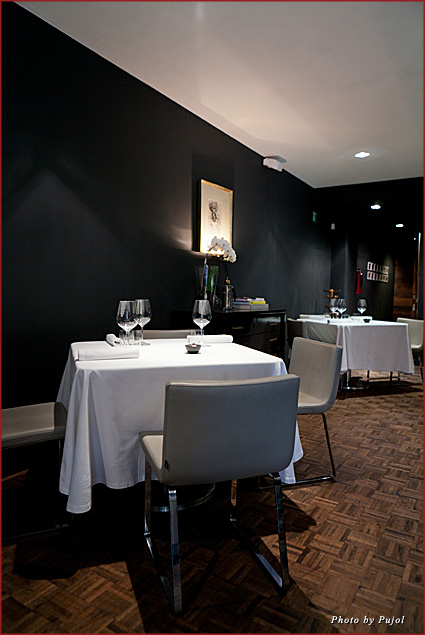 Pujol is at the top of everyone’s to-go list, at least everyone in Polanco or every executive with an expense account. The chef, multiple award wining Enrique Olvera, graduated from the Culinary Institute of America and honed his skills at Everest Restaurant in Chicago. At the top of a page of Pujol’s international awards is the inclusion in San Pelligrino’s list of “The World’s 50 Finest Restaurants.” With that buildup it was a shock to enter a restaurant with décor that matched the minimalist, deconstructed aspects of the cuisine. Because the restaurant is small—only 15 tables—with dark walls and floors with a narrow mirror running along one wall, the emphasis is on the food, presentation, and service. 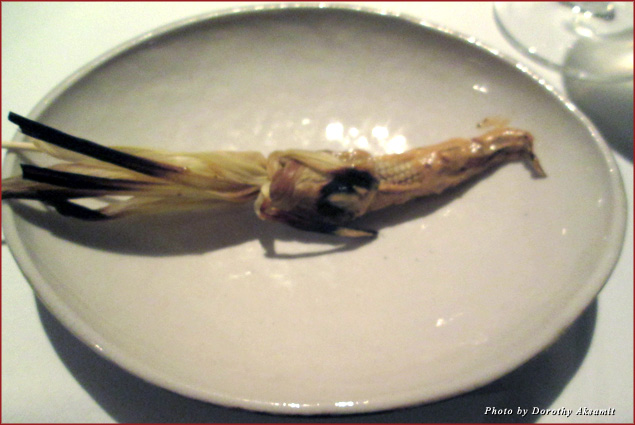 The dramatic first course was a whimsical riff on the street vendor’s skewered ear of corn served from a steaming tub. (Or was it homage to the god who fashioned the Mexican people from corn?) Our amuse bouche, a miniature corn complete with its tiny feathered husk, was served from a smoking gourd. Instead of the usual slathering of ketchup and mayonnaise, our virginal corn, harvested before it was impregnated, was swaddled in a coffee-infused mayonnaise. And instead of a sprinkle of chili powder, we would never have guessed that the sprinkle was pulverized ant dust. 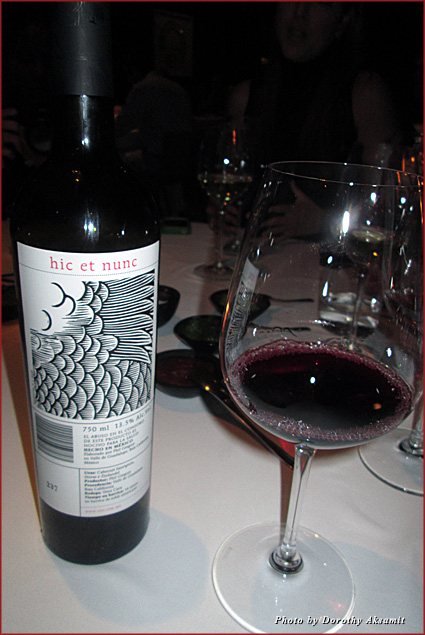 With that introduction, we relaxed. This was going to be fun. The courses arrived like clockwork, paired with wines from the Guadalupe Valley in Baja. Increasingly enthusiastic, we tried to guess the ingredients on each plate, but our imaginations paled before the creativity of chef Olvera. 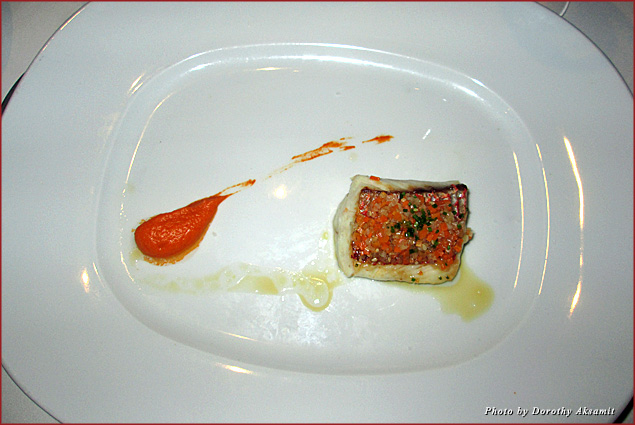 The last course we recognized was a flute of scalpel-thin avocado filled with octopus, shrimp, and squid. After that we were constantly scrambling for the menu, a dictionary, or a waiter to decipher the smears, swirls, dibs, and dabs before the morsel, an artist’s rendition in five colors, disappeared in one bite. Ignore the five green dabs beside the square of snapper at your peril, as they were five different moles: hoja santa (holy leaf), onion, mint, epazote (a Mexican herb), and cilantro. 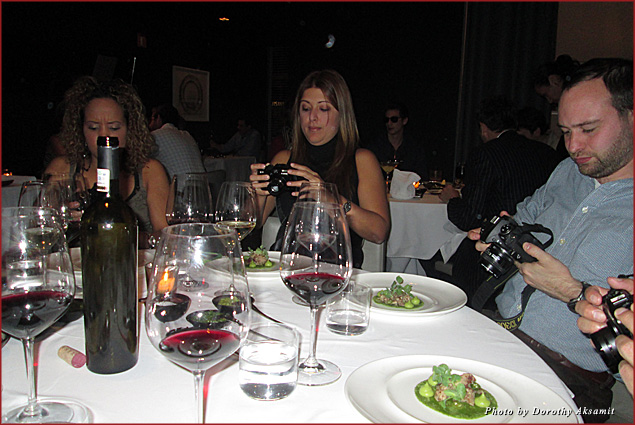 The mysterious tamale contained hutilacoche, a truffle-like fungus found in corn, with a smear of chipotle mayonnaise under a canopy of bubbles that turned out to be the foam of Oaxaca cheese. The table favorite was a barbacoa taco: pork roasted 24 hours in an underground pit garnished with pea shoots and poblano pepper cream.

The dishes were all labor intensive and beautifully presented. The artistic presentations at both Pujol and Paxia reminded me of the ephemeral tidal sculptures of Andy Goldsworthy that are not meant to endure and are preserved only in photographs. As our supposedly tiny appetites were teased with never-ending tidbits, we felt as Montezuma must have when presented with comida del dia, his customary 200 dishes (including fish) relayed by runners from the Atlantic coast 250 miles away. 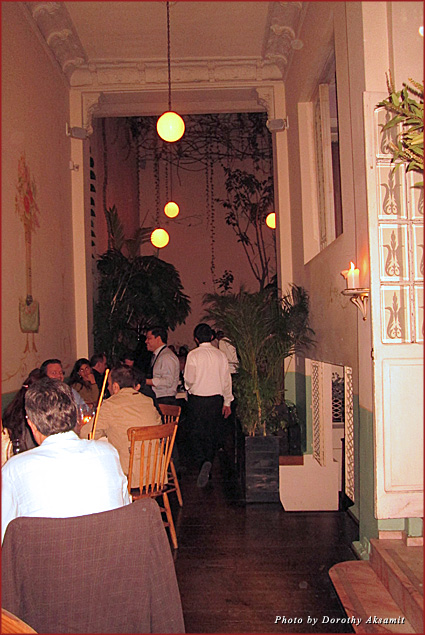 For our next culinary adventure we journeyed to Colonia Roma for a taste of Italy. Rosetta is in a lovely three-story mansion. Carved doors set in a fanciful stone façade lead to a flower-filled covered patio that was fully occupied on our Saturday night visit. Our reservations were for an upstairs dining room that was small with only four rustic tables. White walls, bare and weathered tables, and an arched niche for flowers lent an elegance and simplicity to the room. The food matched the décor: elegant and simple. Chef Elena Reygadas studied in London and combed the countryside of Italy collecting traditional Italian recipes and inspiration to bring back to Mexico. A selection of straight-from-the-oven-warm breads (from the in-house bakery) quickly appeared, along with a saucer of olive oil. 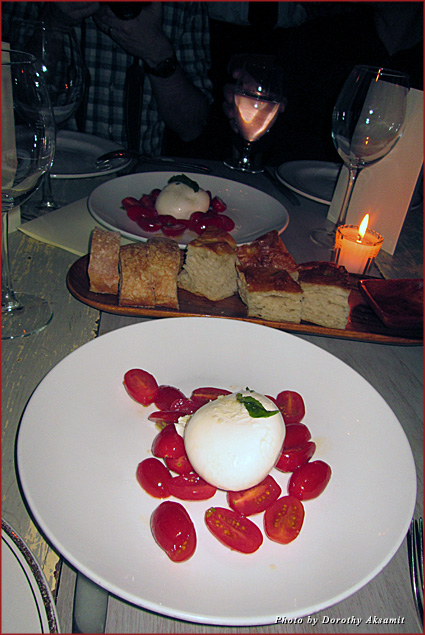 After our previous culinary adventures I have to admit it was a relief to recognize everything that was served. An insalata caprese with tiny tomatoes surrounding a globe of fresh mozzarella cheese disappeared in a flash. 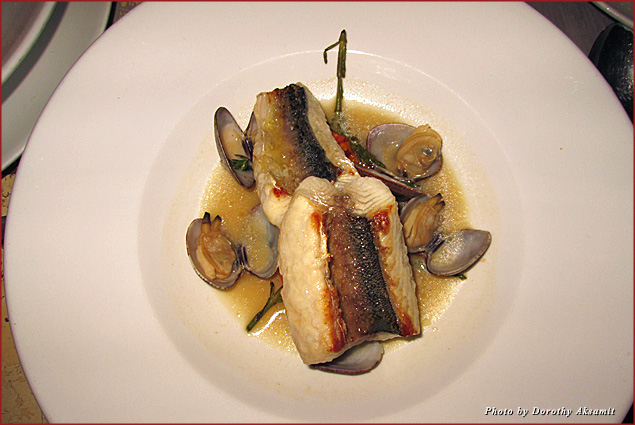 Grilled red snapper swimming in a broth with four clams followed a flavorful ravioli dish with homemade pasta. Fresh ingredients served in simple straightforward presentations had won our hearts. We thought we couldn’t eat another bite, but who could resist cannelloni, crisp on the outside and creamy on the inside.

Rosetta, where chef Reygadas has set the bar for superb Italian food on any continent, was a complete surprise. 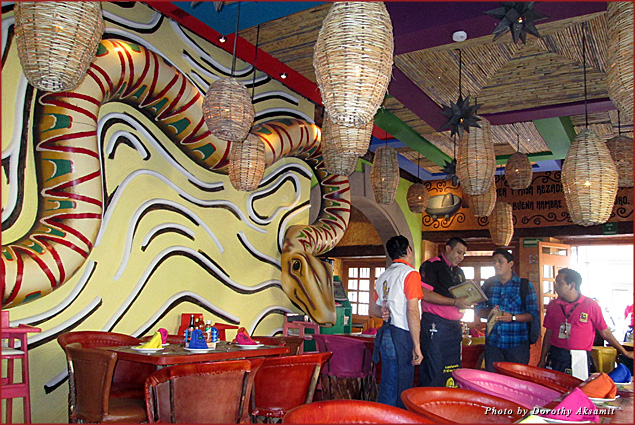 For our farewell lunch we choose a typical Mexican restaurant, a favorite of families celebrating a birthday, office workers who have time to linger over lunch, and hungry tourists. An outrageously colorful scene of all our Mexican cantina dreams greeted us at La Chilanguita Centro, where a two dimensional snake framed an entire wall. We settled into Mexican leather chairs and, of course, a Mariachi band was waiting in the wings. 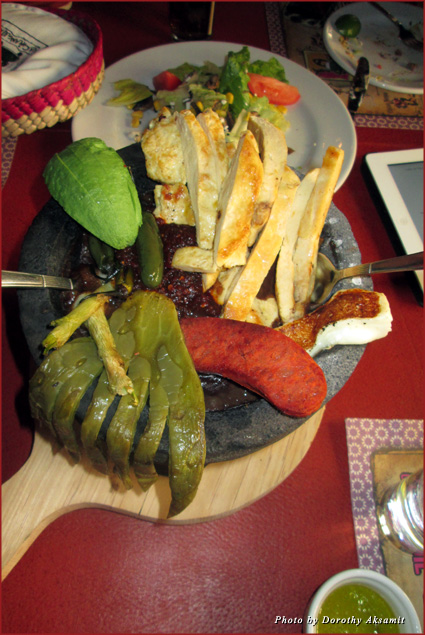 From our bountiful table the standout dish was a stew served in a molcajete, a three-legged basalt bowl, and filled with beans, chorizos, avocado, fried cheese, and cactus (nopal). Ten minutes later the dish was still bubbling like a volcano.

But what no one will forget are the photo-op bathrooms where colorful tiles cover walls and washbasins, and where, in brilliant blue toilet bowls, lilies and sunflowers are flourishing.

Our weekend blitz of Mexico City only served to whet our appetites. We found that Chilangos go to restaurants for the same reason we do: new taste sensations and novel presentations. Many of our misconceptions were laid to rest. But still, I’m afraid, I will always have a secret taste bud for Tex Mex. 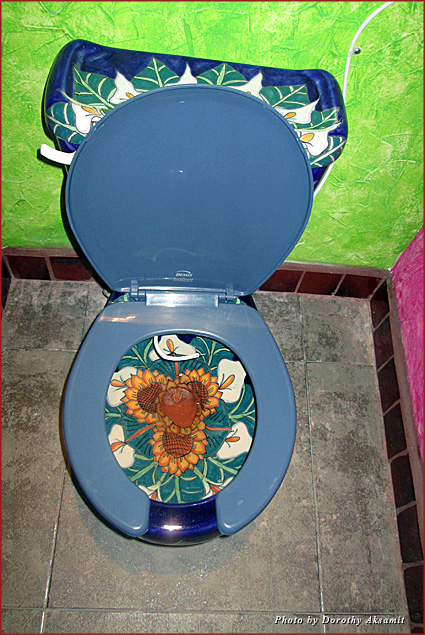