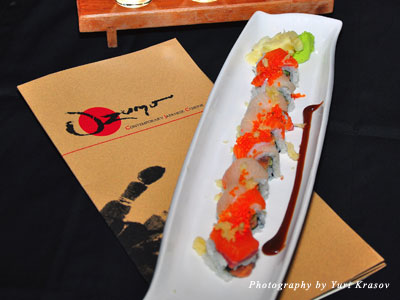 If you love Japanese cuisine as much as I do, you must agree that no one can get fat by eating those delicate, artful morsels served in decorative dinnerware. (I’m sure sumo wrestlers just have big bones.) 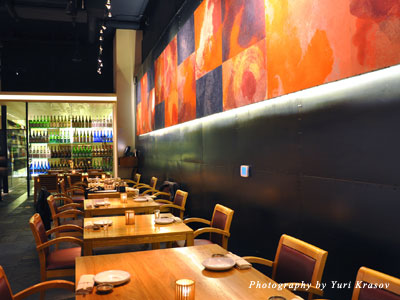 At new and modern Ozumo in Oakland, adorned with the original washi artwork by Sarah Brayer, my dining companion and I started our well-balanced prix-fixe menu with rustic Sendai miso soup. It is made of red and white miso and koji, and filled with silken tofu cubes. Another starter, edamame beans tossed with garlic and soy sauce, tasted so much better than the run of the mill unflavored version – we finished a bowl before our brown rice tea arrived. 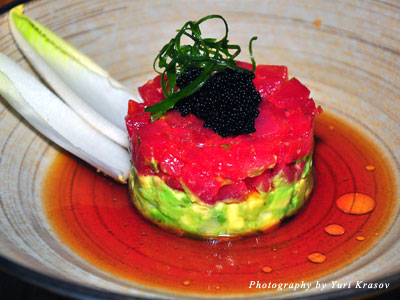 Our appetizer course, Dohyo, had already something to do with the Japan’s beloved sport. Dohyo means the ring in which sumo wrestlers perform, so the dish looked like a round sumo arena.

Big eye tuna tartar is placed on top of an avocado-edamame-cucumber mixture, topped with a dollop of black tobiko and dressed with ponzu sauce and chili oil. Two endive leaves were resting on a side of the dish like two sumo wrestlers ready to… dig in. 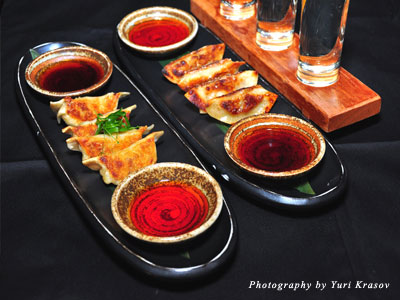 Housemade gyoza came next, nicely browned and flanked by the sauces – ponzu and chili oil. Both crispy and delicious, meat gyozas are stuffed with Kurobuta pork, and vegetarian ones – with tofu, shiitake, cabbage, green onion, and ginger.

The name of our next dish, Sekiwake sushi roll, once again referred to wrestling. Sekiwake is the third highest rank in professional sumo. It didn’t take us long to wrestle down Ozumo Oakland’s signature combo of spicy tuna and cucumber wrapped in rice, with salmon and hamachi on top, sprinkled with red tobiko and tempura flakes. A brushstroke of peanut sauce on a side added color and crunch to the restaurant’s original creation. 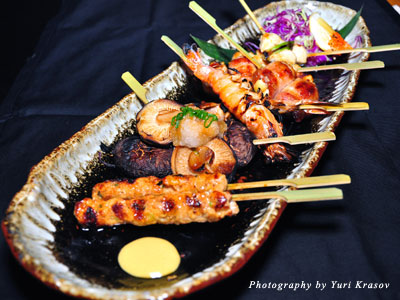 Robata grill cooks use bincho charcoal made of evergreen oak branches to prevent excessive smoking and preserve marinade flavor in foods. In the process of carbonization, bincho logs turn into black rods that sound like steel to the touch and burn at 900 degrees. It takes only a minute to grill a chicken breast skewer to perfection. Three flights of excellent sake from Ozumo Oakland’s well-stacked bar accompanied our perfect meal: mild and smooth Junmai; floral and fruity Ginjo, and honey and grassy Daiginjo.

Recently, the restaurant has created 300club to better introduce its impressive selection of sake. There are eight different 300ml bottles of sake in the bar, selected by Director of Sake Jessica Furui. Once purchased by a patron, every bottle is recorded by the restaurant and when all eight club selections have been tried, a guest receives a complimentary 720ml bottle of Ozumo’s “Seitoku” signature junmai ginjo sake.

Next to Normal: Welling With Emotions at SHN Zinfandel Festival Paints the Town Red