Fly Through the Air With the Greatest of Ease 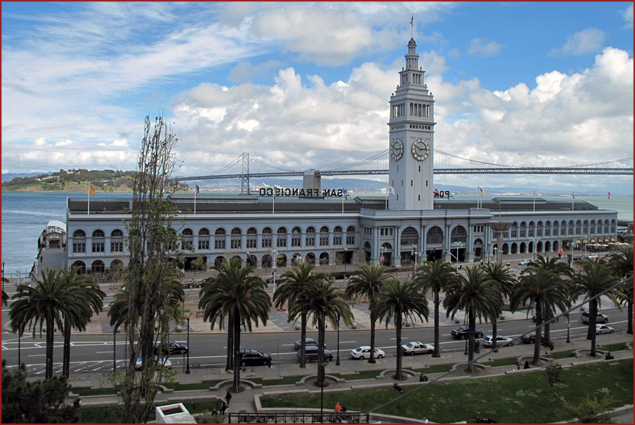 It wasn’t until about 15 minutes after agreeing to go on an 8-story-high zipline in San Francisco that I remembered one small detail…I’m terrified of heights.  Truly, I’m paralyzed by them. In my teenage years I passed out from fright on a roller coaster before reaching the bottom of the first drop and didn’t wake up until it was over.  Nonetheless, this intrepid Insider is determined to seek out unique experiences to be had in San Francisco, so I rendezvoused with the folks from British Columbia, Canada to experience the zipline they’ve erected in downtown SF at Justin Hermann Plaza. 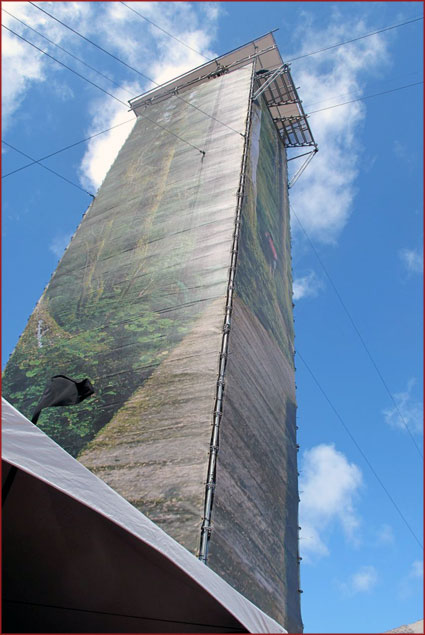 Built by ZipTrek Ecotours (and staffed by some good-looking gents), the Urban Zipline is your ticket to a bird’s-eye view of the city.  Climb a tower to get strapped in for a brief ride along the Embarcadero to a corresponding tower 700 feet away. My knees were a bit rubbery as I stood on the edge of the platform, waiting my turn. I hesitated, then—fully aware of the line behind me and with the help of some smooth-talking from the very patient fellow running the zipline—I eased myself off the edge.  The whirr of the zipline howls like an air raid siren, and the wind whips by you as you pick up speed.  A stunning view of the Bay Bridge and a towering take on the Ferry Building make it all worthwhile. Ride the zipline sitting up in your harness with a white-knuckle grip (like some wimpy writer I know), or daredevil it with some upside-down dangling, like one of the fellows riding ahead of me.  Either way you’re bound to get your kicks on the high-flying ride. Take a friend—the zipline allows two riders to zip simultaneously, making for great shots of your pal’s pleased (or petrified) mug. 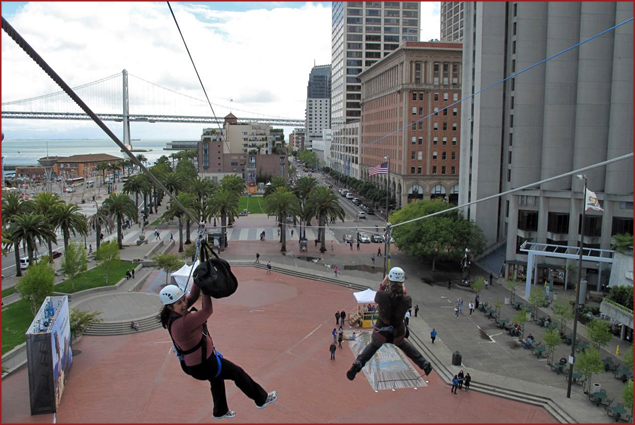 Catch the Urban Zipline, here through April 18th, before it’s gone. Lines start as early as 8am to get placed in time slots throughout the day. Admission is absolutely free. Oh Canada, we salute you!

Ready to zip up and fly high? Now through April 18th at Justin Herman Plaza, the good people of British Columbia, Canada have turned San Francisco’s waterfront into a high-flying adventure with a 600-foot zipline hoisted 8-stories above the Embarcadero. While ziplines are normally reserved for vacation destinations like the rainforests of Costa Rica, this tightrope ride is right at home in SF’s urban jungle. Head to the Embarcadero Center to strap on a harness and hook into your bird’s eye view of the city. The best part? The Urban Zipline is absolutely free, which answers the questions, “What has Canada done for you lately?”