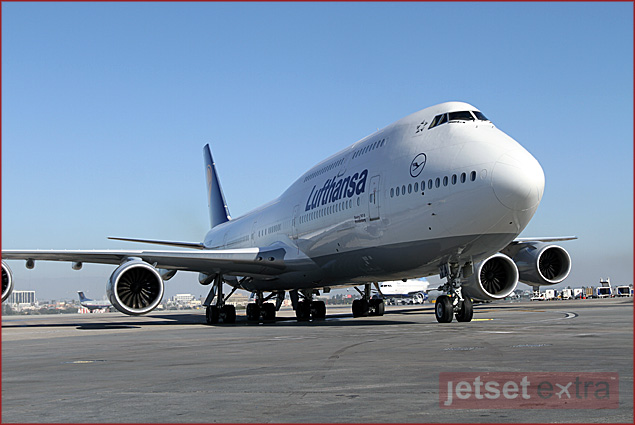 Celebratory water cannons greeted the Lufthansa Boeing 747-8 Intercontinental as it landed for the first time at the Los Angeles International Airport’s Tom Bradley International Terminal in early December. This landing marked the beginning of commercial service of the German airline’s newest flagship aircraft along the Frankfurt to Los Angeles route. The new “Queen of the Skies” will provide daily service between the two cities, increasing capacity on the route by 17 percent and offering a bevy of amenities designed to benefit both passengers and the environment.

L.A. joins Washington, DC, and Indian cities Delhi and Bangalore as the only destinations designated for service of the new jumbo jet. Lufthansa is “very exited to come to such a market, which is a premium market for us and one of the biggest markets for Lufthansa in general,” Juergen Siebenrock, vice president of the Americas for the airline, says.

According to Siebenrock, Lufthansa developed the plane with Boeing based on customer feedback. The aircraft includes 386 seats: eight in first class, 80 in business class, and 298 in economy class. 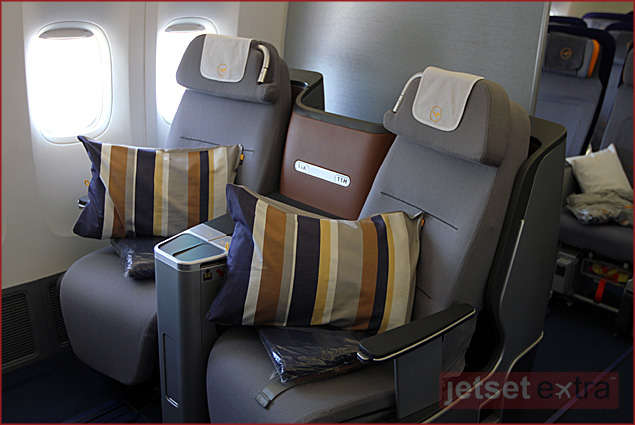 New in the business class section is a unique “V”-shaped seating arrangement; two neighboring seats are angled toward each other, allowing passengers to sit or lie facing the direction of travel. Travelers can experience privacy with nearly twice the distance between two neighboring seats at shoulder level and enjoy more personal living space with seats that transform into a 6-feet 6-inch fully flat sleeping surface at the push of a button. Ergonomically improved cushioning provides a high degree of comfort whether sitting or sleeping. To increase comfort for business class passengers, fliers receive an anti-allergenic blanket and pillow, headset covers, and an amenity kit containing earplugs, socks, a toothbrush and toothpaste, a sleep mask, and lip balm. 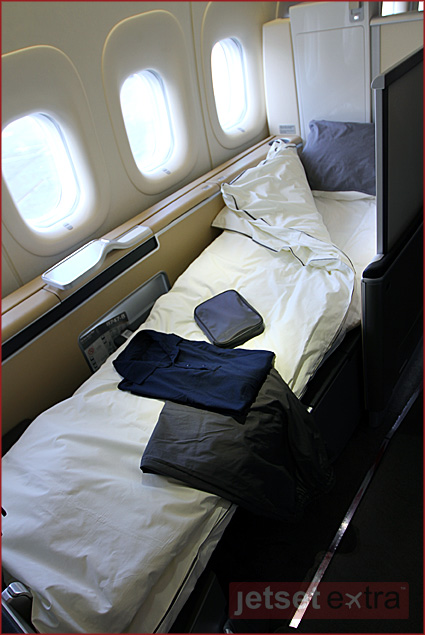 In first class, travelers are situated on the main deck in the nose section of the aircraft, which is not only the quietest part of the plane but also the most private since there is no through traffic. First class passengers have access to an endless number of seating options developed with external ergonomics experts, as well as a bed that measures six-feet six-inches long and two-feet six-inches wide. Electrically powered window shades offer optimum privacy, and the washrooms feature the Lufthansa First Class design.

As if the seating arrangement wasn’t accommodating enough, first class passengers are also privy to optimum comfort with an anti-allergenic duvet and pillow by “Paradies,” a day blanket, pajamas, and socks and slippers. In addition, they receive a gender-differentiated amenity kit that can contain earplugs, a toothbrush and toothpaste, a sleep mask, lip balm, facial cream, a hairbrush, and a shoehorn. 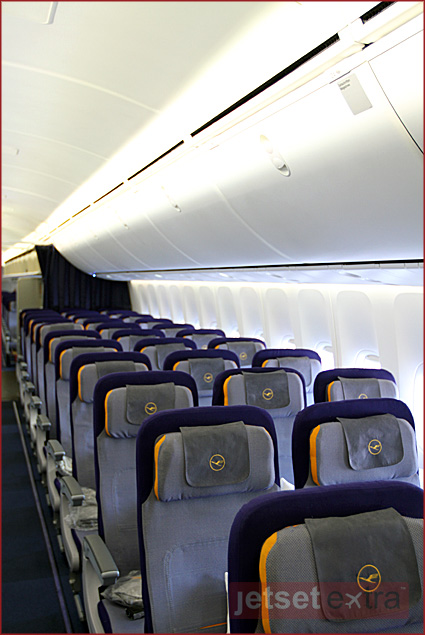 A new slim-line backrest and seats with an optimized ergonomic form provide two to three inches more legroom at knee level, compared to the Boeing 747-400, for travelers flying in economy class. In addition, when the backrest is reclined backward, the seat pan automatically moves forward, allowing for a more comfortable sitting position. Economy class passengers also have access to an in-seat power supply for personal electronic devices and a greater amount of storage space in larger overhead bins.

Every flier in every class is privy to a personal video monitor, which shows feature films in up to eight language versions, popular television series, and fascinating documentaries. The video screens also display international radio channels, a wide range of CDs, multi-player games, and a special children’s channel. 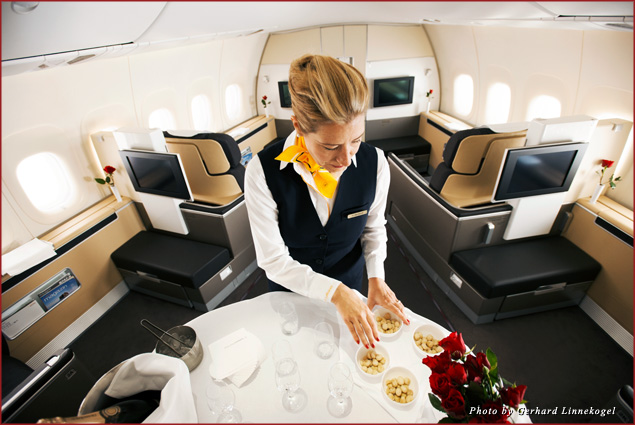 On outbound flights for first class fliers, Lufthansa has developed dining menus, to be served at two-month intervals each, with top chefs who have least two Michelin stars or an equivalent rating. The airline intends to focus on German and European chefs and most recently featured the cuisine of Joachim Wissler, head of Restaurant Vendôme at Germany’s Althoff Grandhotel Schloss Bensberg.

The December menu featured appetizers such as caviar and King prawn confit and entrees including beef shoulder braised in Cabernet Sauvignon, filet of char in sauce verjus du perigord, and free-range goose flavored with spices, orange sauce, and red cabbage. Dessert options included dark chocolate cremeux with fresh raspberries and semolina and nougat dumplings as well as a selection of cheeses.

In business class, menus served in two-month intervals each contain a special theme. The most recent theme is “Culinary winter greetings from the mountains,” which was created by Austrian chef Johanna Maier, recipient of two Michelin stars and four Gault Millau toques. The theme is supported by the in-flight entertainment movie “Fire and Ice” and features a sampling of Maier’s festive baked goods.

Appetizer options for December included smoked Wels catfish and venison terrine with juniper and lingonberries, while the main course included a choice of classical roast goose, sesame- and nut-crusted Pike perch, and spicy pumpkin dumplings. Business class passengers also have options for after-dinner cheese or dessert. Those who need time to work or relax during the flight can request a cold Express Meal, which includes a choice of appetizer, cheese, and dessert.

While its passengers travel comfortably on the inside, the 747-8 keeps the environment cleaner on the outside. The jet generates a 30 percent smaller noise footprint than the 747-400 and brings double-digit improvements in fuel efficiency and CO2 emissions per passenger. It also features new, state-of-the-art wings with improved aerodynamics and raked wing tips; new fuel-efficient, US-manufactured GEnx-2B engines that help reduce fuel burns, emissions, and noise; and fly-by-wire technology.