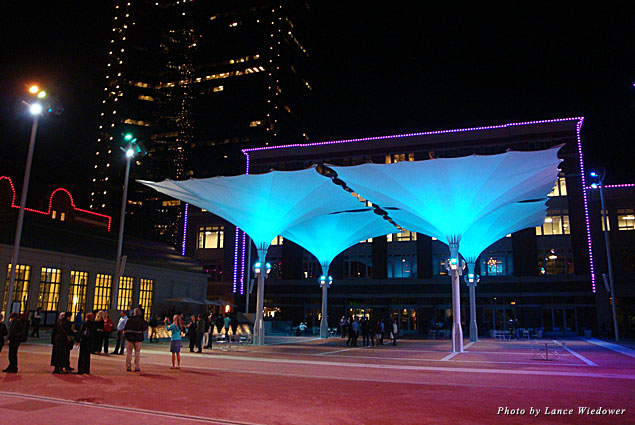 A weekend isn’t enough to properly get to know Fort Worth, Texas, but it’s more than enough time to fall in love. From the Stockyards National Historic District to the Cultural District and its acclaimed museums, there is enough to satisfy the thirst of any traveler. But at the core of the city is Sundance Square, the 35-block downtown district that could begin to shine above all with its newly opened Sundance Square Plaza.

The reason for that potential success lies at the heart of its location. It can be argued that when travelers visit a city, they flock to its city center. And in American cities, that tends to be what’s simply called downtown. The more walkable the downtown, the more likely visitors are to spend time there. Sundance Square in Downtown Fort Worth is what Sundance Square CEO Johnny Campbell calls an experience just right for pedestrians. 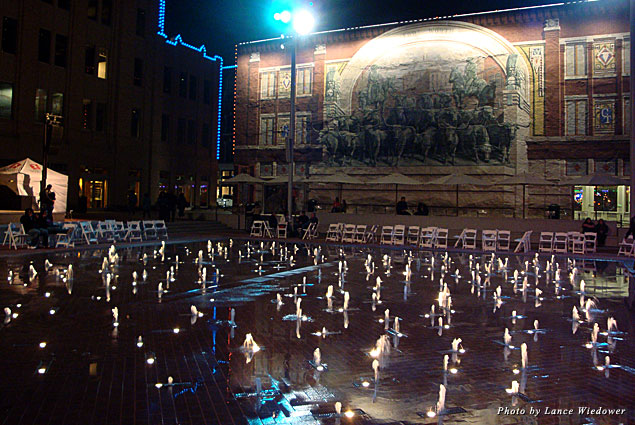 When the organization held the 55,000-square-foot plaza’s grand opening on November 1, Campbell was quick to point out how busy the facility would be. Starting with the Lone Star Film Festival that month, there would be plenty of holiday season programming including a large Christmas tree display, the January stock show parade, ESPN for the NCAA Final Four in April, and then the Main Street Art Show.

“You will see lots of energy,” he said with an understatement. “There are a lot of things to see and feel in the plaza.” 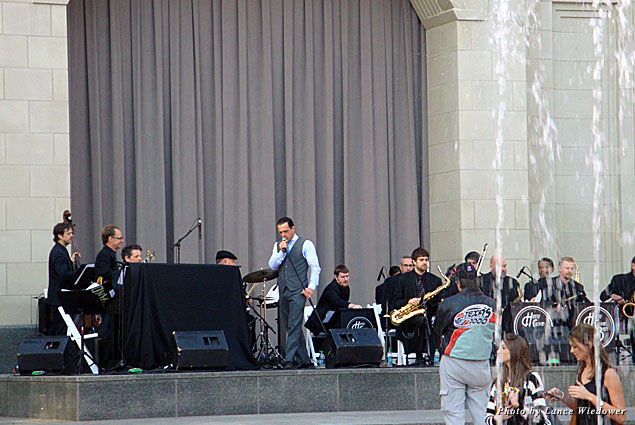 The Sundance Square Plaza features a permanent stage for concerts and movies, water features, four 36-foot-tall Teflon umbrellas, restaurants, bars, and shopping. What was once a parking lot is now a gathering place for all of Fort Worth. Three new buildings were added to Sundance Square, bringing additional office space, residential units, and ground-floor retail space.

The vision of the plaza has its roots in bringing people to Fort Worth’s downtown core. The Dallas-Fort Worth Metroplex has much to offer visitors, but in Fort Worth it has tended to be just north of downtown in the Historic Fort Worth Stockyards or to the southwest in the city’s great cultural district with its multiple world-renowned art museums. The center of Cowtown’s downtown has been known as Sundance Square, but until the plaza opened in the fall, that really didn’t have a true meaning. 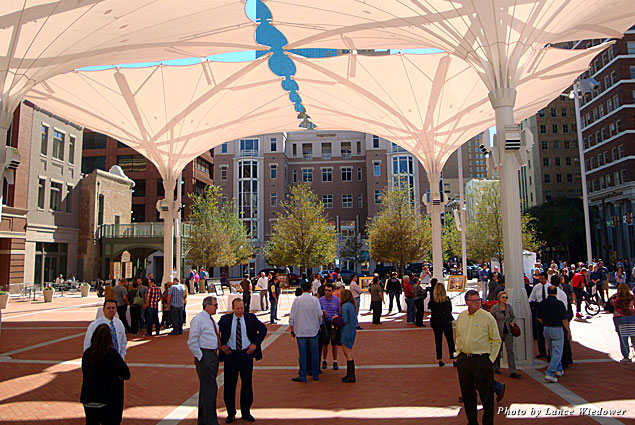 “We’ve needed a focal point for downtown revitalization for a long time,” Campbell said. “People have come to Sundance Square and called our office and asked, ‘Where is it?’ It didn’t have that place.”

But “that place” isn’t built with visitors to Fort Worth in mind, although the hope is still that travelers will flock there just the same. Campbell said the leadership behind the plaza’s creation focused on luring in locals instead.

“Today’s sophisticated traveler wants to go where the locals are,” he said.

And there is plenty around the plaza to draw locals and visitors alike, from shopping and dining to nightspots and cultural landmarks. 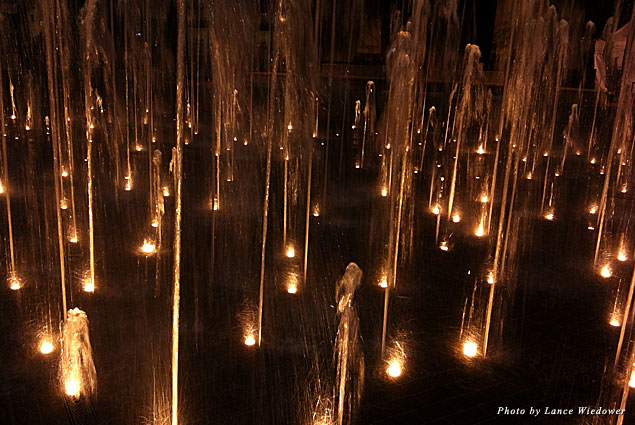 Even before the creation of Sundance Square Plaza and the new restaurants and nightspots built fronting it, the Sundance Square neighborhood had its share of restaurants and bars. But it could be argued that without a focal point—such as a professional sports arena, for example—there wasn’t as much reason for locals to visit the neighborhood. Yes, the prestigious Nancy Lee and Perry R. Bass Performance Hall is in Sundance Square. It’s the permanent home for the city’s professional symphony, opera, and ballet companies. And numerous outstanding restaurants are in the neighborhood. But the plaza now provides a focal point for events, a gathering spot for people in the heart of the city.

So maybe a romantic night out could include dinner at Del Frisco’s Grille overlooking the plaza, followed by drinks at Silver Leaf Cigar Bar, and a nightcap at Scat Jazz Lounge. And it’s all steps off the plaza. 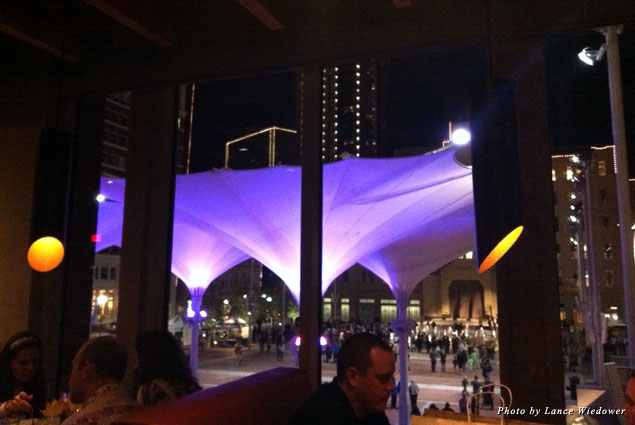 Chris Gensheimer, museum store manager at the district’s Sid Richardson Museum, is thrilled with the plaza and what it means for Sundance Square. Involved with multiple businesses in Sundance Square, he said the plaza has been a long time coming.

“I came 17 years ago and they showed me plans for it then,” he said. “I’m excited about it. We’ll have a lot of people walking around here now.”

The Sid Richardson Museum is one of the more unique attractions in Sundance Square. On my visit to Fort Worth, it was one of my favorite experiences. The museum was opened in 1982 as a home to the collection of American West paintings owned by the late Richardson. When I visited, the museum’s two galleries had an exhibit featuring paintings and sculptures from Frederic Sackrider Remington and Charles Marion Russell depicting scenes from the American West. 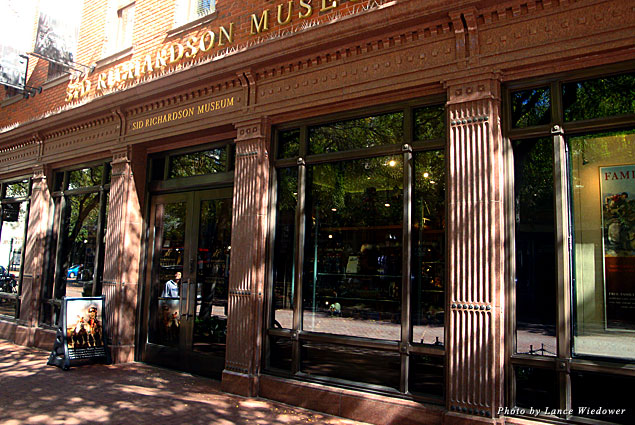 Cowboy culture is important to what Fort Worth is. It’s not just in the nearby Stockyards; it can be found in the men and women walking the streets of downtown donning fashionable boots and cowboy styles from some of the city’s great Western wear stores, including the Sundance Square outpost of the Stockyards’ legendary store, M.L. Leddy’s. 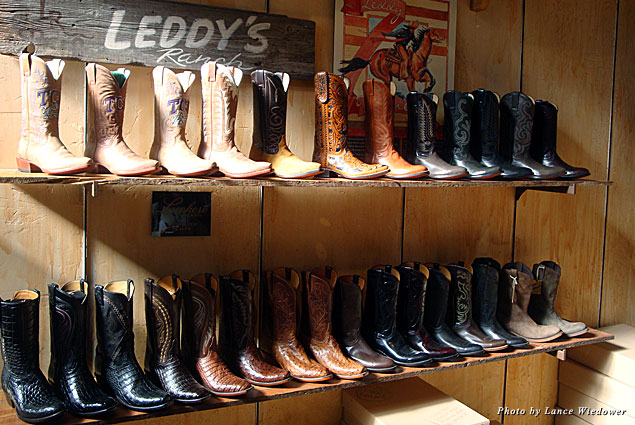 Gensheimer is hopeful to see that cowboy touch in Downtown Fort Worth and Sundance Square grow.

“Visitors to Fort Worth just love our cowboys and culture,” he said. “We need to bump up the cowboy. That’s what people come to see. I’ve had people come in from Paris and don’t speak English, but they identify with the cowboy. They love that image.”

Sundance Square, Campbell said, is the third-most visited place in Dallas-Fort Worth. And considering all the museums, landmarks, and cultural centers in the Metroplex, that’s saying something. Downtown Fort Worth is positioned to bring in even more visitors, thanks to the massive AT&T Stadium in Arlington just to the east of Fort Worth, the home of the Dallas Cowboys and many other sporting events. With its location between Dallas and Fort Worth, it’s natural for one visiting team’s fans to set up shop in Dallas while the other heads out to Fort Worth. 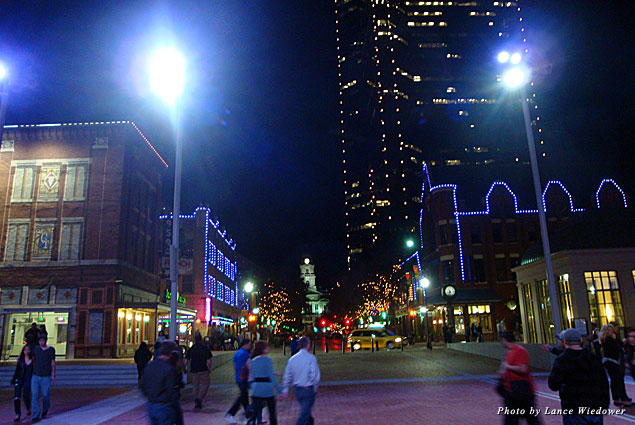 The scene will be set from Sundance Square Plaza when this year’s men’s NCAA Final Four is held at AT&T Stadium. ESPN chose Sundance Square for its live telecasts. It will be a coming-out party for a plaza years in the making.