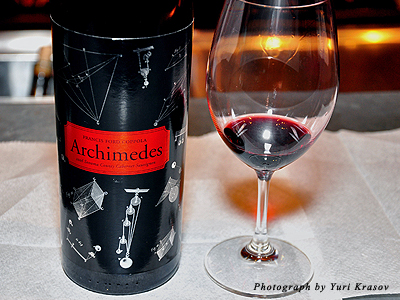 Wine-tasting becomes a family affair at Francis Ford Coppola Winery in Geyserville, California. Inspired by his childhood memories of weekends at Coney Island, Mr. Coppola created his Wine Wonderland, where all generations can enjoy wine, food, and various fun-and-games. 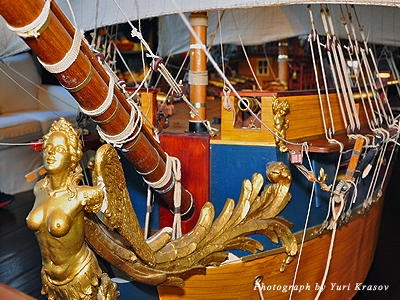 In addition to a tasting room and a museum of film memorabilia, there is Rustic, Francis’s restaurant, which serves his favorites; a gift shop; a swimming pool with a bar, four bocce courts, a pavilion with live music, and a children’s library in a colorful tepee on premises. 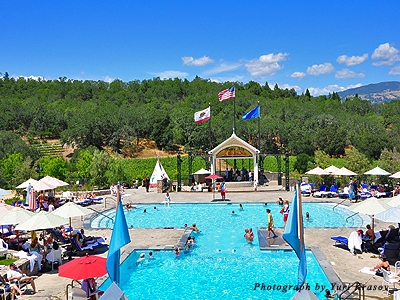 In the main building with a grand staircase and a clock tower, a dramatic catwalk leads to the production facility with the bottling line. A winery tour includes some appellation education, ABCs on the winemaking process, and an explanation of Coppola’s labels. 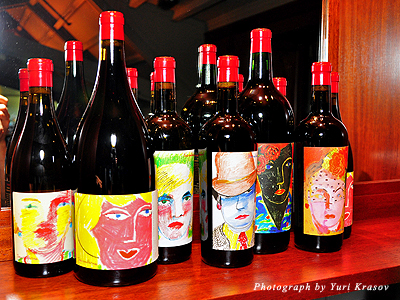 Votre Sante and Director’s Cut are rather self-explanatory, as well as Sofia Wines – a loving father’s present to his daughter. Sweetish Su Yuen Riesling and Syrah, good for pairing with spicy Asian cuisine, are named after a picky-eater princess, whose court had to prepare multiple small tastes for her and thus started a dim sum tradition. The story is made up, of course – we are dealing with a famous storyteller after all.

On our tour, we tasted a newly released 2009 Reserve Russian River Valley Chardonnay; 2010 Sofia Rose; 2009 Diamond Collection Malbec, the idea of which came to Coppola while he was shooting in Argentina; and a 2008 Director’s Cut Alexander Valley Cabernet Sauvignon, made with fruit grown on the property.

Our lunch at Rustic, on a shadowy terrace overlooking Alexander Valley, was a memorable affair, in a class of its own. 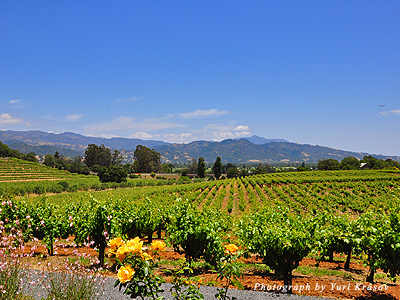 A fresh sunny breeze was blowing from the blue hills on the horizon, while green vines and tea roses in full bloom right outside the terrace filled the sweet California air with their warm fragrance.

The menu at Rustic consists of Francis Ford Coppola’s favorites, often named after a family member or a friend who created or perfected a recipe. 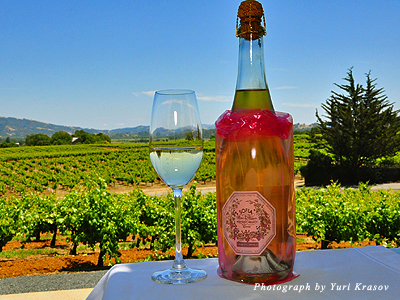 First, we had a sip of Francis Coppola “Sofia” Blanc de Blanc, and tried an Italian-style beignet, called Aunt Christine’s Pettole, brought hot to the table in a paper bag. Then, a traditional Caesar salad, originally created at Caesar’s Grill in San Francisco in 1924. Then, my favorite thin-crust Neapolitan-style Pizza Luigino with tomatoes, mozzarella, oregano, and basil. 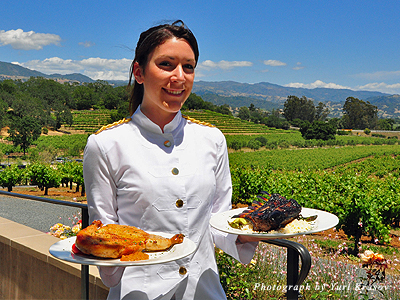 And then the main courses arrived – a smashing Chicken Mattone, fried “under a brick” to utmost crispiness on the outside and succulence on the inside, and Rack of Lamb Madame Bali – mild and tender, marinated for three days in pomegranate juice before being grilled on a traditional Argentinean parrilla. Accompanied by Francis Coppola “Reserve” Pinot Noir from Dutton Ranch, it seemed like a match made in heaven.

A day at Coppola’s is a perfect holiday on its own, but on Father’s Day it promises to become unforgettable. Give your father – or any father in your life – the gift of visiting the winery, a gift membership, or a bottle of wine. The Diamond Collection is the most recognizable national brand, while other Coppola wines are mostly available through the winery website.

All About the Water at Spa Solage Farm Foods at Farmstead