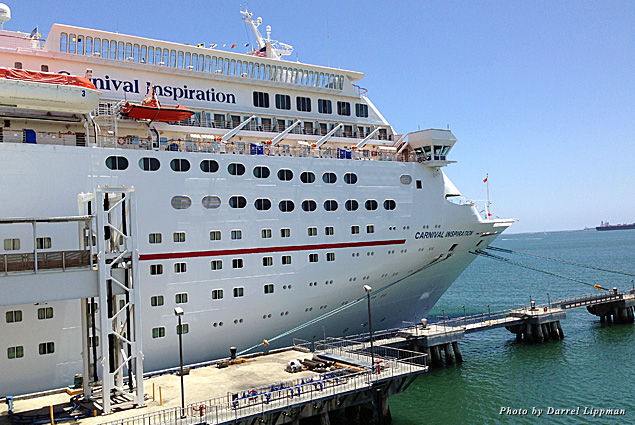 “This is the best day of my life,” exclaimed Xander as he changed into his swim trunks and surveyed our cabin accommodations with its ocean-view window and two upper bunks that folded down from either wall. While that may sound like the unbridled enthusiasm of your average six-year-old about to embark on his maiden sailing, I would wholeheartedly agree that my first voyage on a big-ship cruise—Carnival Inspiration’s three-day trip from Long Beach to Ensenada—exceeded practically all expectations.

First and foremost, what really stood out on this mini-vacation was the hospitality of the crew. From the wait staff at dinner, who addressed us by our first names and made napkin hats for the kids, to the omnipresent housekeeping team, Carnival certainly made us feel right at home (or should I say “at sea”?) from the moment we stepped into the cabin. As we entered ours, a crewmember poked his head in, noted he had not yet put the necessary amount of pool towels in our cabin, and informed us we could get them at a station on the Lido Deck. 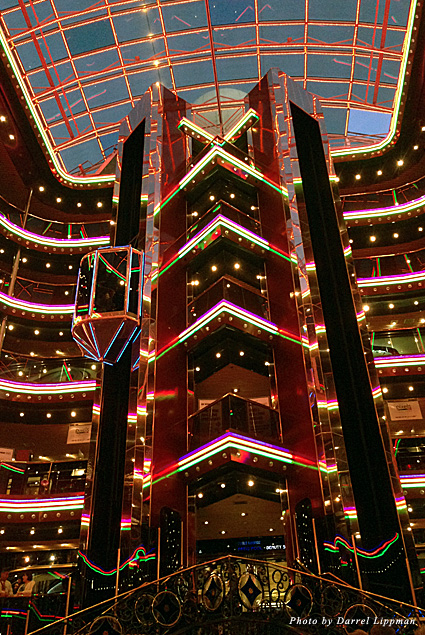 Just like the mini, tri-fold deck plan map each traveler receives upon check-in at the cruise terminal, here is a handy breakdown of our experience:

Our Upper Deck cabin was very clean and not quite the tight quarters one might expect for a family of five. There were two upper bunks that folded down at night, two lower cots with bedding that was also more comfortable than expected, and a fifth twin-size bed under the window. The kiddies loved the family togetherness and camp-like effect as we played musical beds over the three nights (with only one isolated head bump or two).

There was also ample closet space with a safe that opened and locked by sliding your cabin card and a cozy bathroom with a small sink and shower stall; they even managed to squeeze in a small desk and chair into one corner under the mounted television.

We really only spent time in our cabin when it was time to hit the sack after a long day of exploring the ship, so the accommodations got a thumbs up from everyone. We were even happier with our choice of cabin category when we caught a glimpse of an inside cabin and thought how closet-like it appeared.

The crew takes a lot of pride in their jobs, from the housekeeping staff eager to make sure the cabin is equipped to your satisfaction (including fashioning a different towel animal on your bed each day) to those dinner servers who remember your names. Basically, crewmembers were ready to provide service with a smile anywhere on the ship at any time.

There’s a very well organized and attended “muster” drill before the ship leaves port that shows where your lifeboat station is in the event of an emergency, an exercise that had the kiddies pondering their green wristbands and asking questions like, “Will we stay together as a family if something happens?” When the drill ended about 30 minutes later, thoughts of an unlikely evacuation disappeared from their collective heads as they dove into their appetizers at our first dinner seating.

Of course, I was well aware cruising is notorious for the food quotient, but it was the overall quality that was the unexpected pleasure. When there are options including lobster, steak, and scallops at the nightly dinner seating, I wasn’t surprised one bit our trio waved off the kids’ menu in all its pizza/chicken nugget/burger splendor. 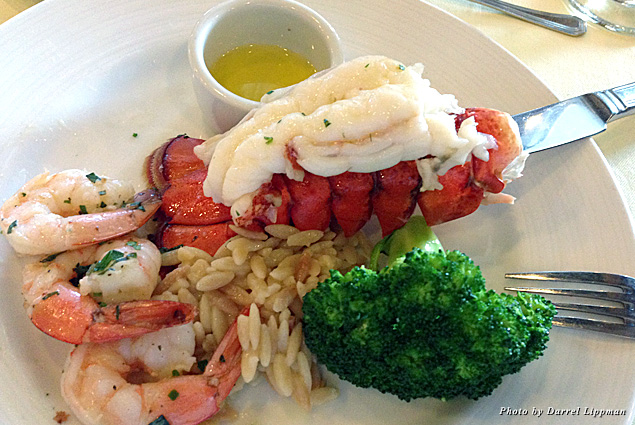 Xander was addicted to the shrimp cocktail appetizer, while 10-year-old Troy gave the thumbs up to adventurous apps such as alligator fritters, escargot, and calamari. I appreciated how the menu changed each night; one evening, I chose the chateaubriand with a side of bacon mac ’n’ cheese (both were better than some high-end restaurants in which I’ve dined). Other main course dishes included prime rib, mahi-mahi, grilled salmon, and a penne pescatore with shrimp, scallops, mussels, and salmon. Even the sides were kicked up (in particular, we all enjoyed a very tasty ratatouille).

Desserts ran the gamut from crème brûlée and a chocolate pana cotta to a cheese plate and a banana bread pudding with coconut ice cream.

But what really topped off my dinner was seeing seven–year-old Athena join one of our regular servers in the nightly, post-dessert dance in the aisles (to the tune of “Celebrate good times, c’mon!”).

There’s a daily publication called the “Fun Times” that lists the day’s offerings—everything from shows and shopping to the day’s drink special (pomegranate lemonade anyone?). There are a multitude of activities for the kiddies, including mini golf, ping pong, shuffleboard, and a Camp Carnival kids club, where we dropped our three off for about an hour to see a magic act.

The little ones also frequented the Waterworks area with three water slides, located just behind the boat’s fin, as well as the video arcade and a towel animal-folding demonstration and puppet show. We took in an all-ages show at the Punchliner Comedy Club and also saw a 1970s revue called “Motor City” hosted by the cruise director—a guy who certainly earns his keep; we saw him everywhere, from dispensing key facts about the Carnival channel in the cabin to hosting the Hairy Chest Contest on the Lido Deck in honor of Father’s Day. 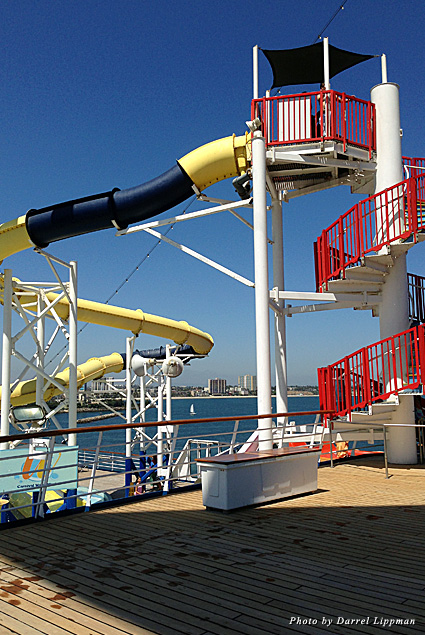 We were regulars in the “Shakespeare Library,” where vacationers can read a book or choose from a variety of Hasbro board games to play (our games of choice were Candy Land and a match game called Memory). The toy company giant sponsors a live stage presentation called “Hasbro The Game Show,” where its popular games come to life in an interactive program with the audience.

There’s also a spa and adults-only Serenity Deck, but we didn’t user either (the latter always seemed to have way too many bodies crammed into each of its two Jacuzzis and no vacant lounge chairs). We also merely peered into the Monte Carlo Casino on the Promenade Deck, where many of the smaller club rooms, including karaoke, are located side-by-side, and bought some Carnival mementos at the Fun Shops on the Atlantic Deck.

Since it happened to be Father’s Day (something I had not realized at the time of booking), I got to relax on the Lido Deck for a couple of hours with a frosty 24-ounce Foster’s Lager until the family came up to wake me following their afternoon nap in the cabin. 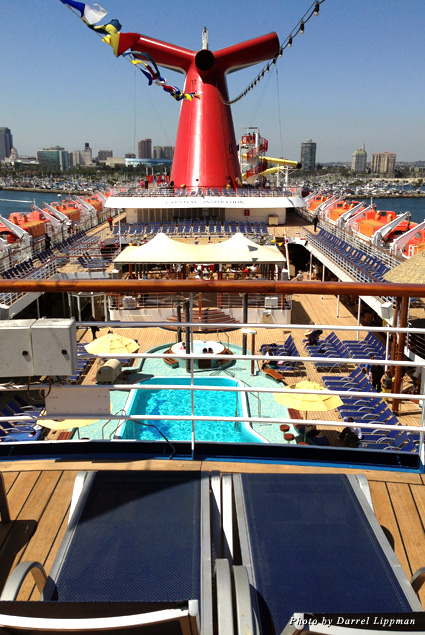 We ooohed and ahhhed over a school of five or six dolphins swimming at the aft of the ship on Sunday’s Fun Day at Sea, and Xander pointed out a seal frolicking at the Ensenada dock as well. Other extreme close-ups with wildlife included an endless stream of hovering/hitchhiking seagulls along the way.

A few weeks prior to departure, Carnival was pretty efficient with the email reminders to help prepare for our sailing; tips included registering the travel documents of each member of our party to make for a smooth embarkation process and opening a shipboard account to be able to swipe the card that doubled as our cabin key. We could also review and settle our shipboard account at kiosks on the Promenade Deck.

While many cruisers chose to stay onboard while the Inspiration was at the Ensenada port, the sightseeing set had a wide range of activities to choose from during the eight hours at port. At La Bufadora, one of the largest marine geysers, or “blowholes,” in North America, waves force air into a sea cave and the receding water spouts into the air, often more than 100 feet; it is probably one of the most popular choices for visitors and is located about 25 minutes south of Ensenada. There are also horseback-riding tours on the beach, ATV/jeep rentals, wine-tasting tours, and good old-fashioned souvenir shopping on the main avenida. 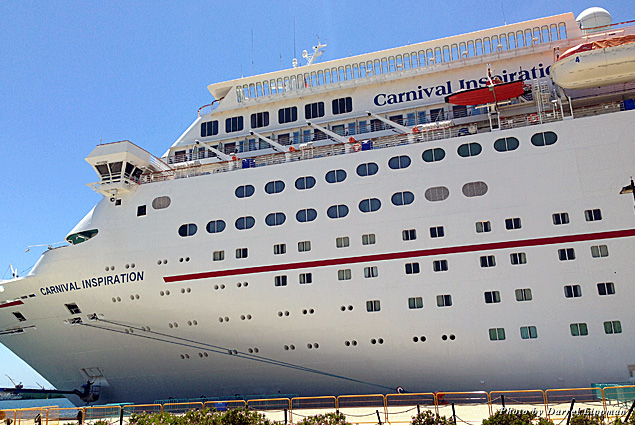 We opted to shop and took a local shuttle for the five-minute ride into town to pick up a few souvenirs. The bus dropped us off at Plaza Pueblo Antigua, basically a bar/club with a poolside patio where they hope you’ll use the coupons they distributed on the ride over. We immediately strolled over to the main drag, where we found a rustic little place called El Corralito Cantina that made one of the best guacamoles we’ve ever had; it was here we raised a toast (virgin mango margs for the kiddies) to our weekend getaway. This cantina also claimed to be the birthplace of the very first margarita! 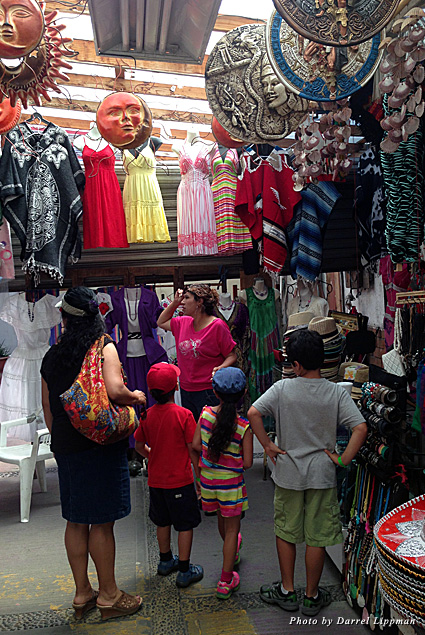