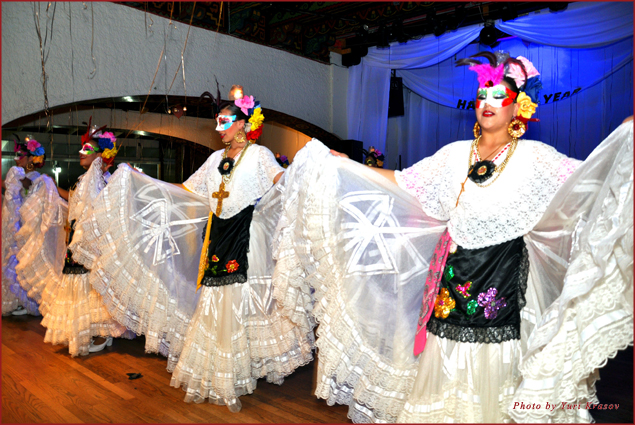 But don’t let me get carried away. As I start writing this story, my husband Yuri (of so many years) and I are waiting for a camera-ready sunset on the balcony of our oceanfront suite at the Rosarito Beach Hotel Pacifico Tower. There is something enticing about staying in a big hotel during the off-season. Undisturbed swimming pools, wind-swept sandy beaches lined with swaying palms, angry waves moving to the shore in bottle-green rolls – lead-gray beneath the horizon line.

Devoid of human presence, Mother Nature is deep in self-reflection. It’s been raining all day today, all the way from Oakland Airport to San Diego, to Tijuana, to Playas de Rosarito – a very special town in Baja California, seemingly preserved in time (The original “pet rocks” were imported from here to the United States back in the 1970s… how groovy is that?) 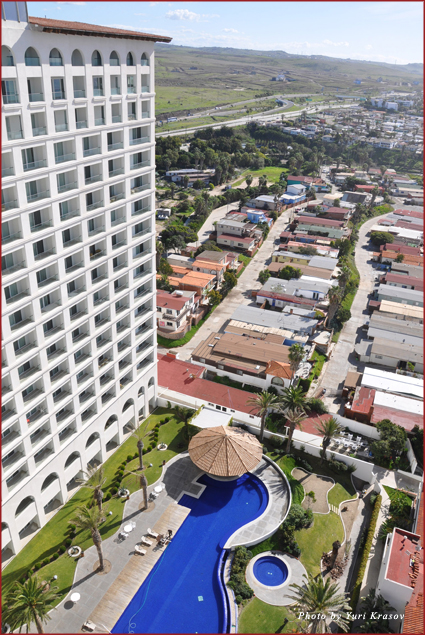 Founded in 1925 and popular with Hollywood types during Prohibition and beyond, the Rosarito Beach Hotel maintains its distinct character and the special charm of a glamorous era. Big stars were regulars here, among them Marilyn Monroe, Rita Hayworth, John Wayne and Frank Sinatra.

At the Azteca Restaurant, where we had our breakfast (Baja omelet and jugo verde – green juice – made of nopal cactus, apple, celery, and parsley), brass labels point to the favorite tables of celebrity visitors. Spencer Tracy used to sit in a corner, order salmon tartar, and ask if the fish was caught by an old man (referring to his own role in The Old Man and the Sea).

Manuel Barbachano, the hotel’s founder, was a local visionary who also brought electricity, telephones, and the Tijuana Ensenada highway to the area. Legend has it that his young bride, Maria Luisa Chabert, wanted to be an actress, so he promised to bring Hollywood to her. She never made it to the silver screen, but became a great party hostess in the hotel, decorated it according to her impeccable taste, and catered to the crème de la crème of both Baja and Alta California. A historic hallway in the original building, Salon Maya, is still adorned with the floor tiles, wall murals, and painted ceiling beams from the 1930s. The owners’ mansion now houses Casa Playa Spa and Chabert’s Restaurant, both intricately decorated with colorful Mexican tiles, chandeliers, mosaics, mirrors, and period furniture.

Hugo Torres Chabert, the Rosarito Beach Hotel’s current owner, is a descendant of the founders and just finished his second term as city major. He served his first term from 1995-98, when he began the movement to make Rosarito Beach a separate city from Tijuana.

Mr. Torres and all the hotel administration and staff participated in the New Year’s Eve Party at the hotel, which was open to the public. And what a swell party that was!

Salon Mexicano – a celebration room with a stage, a bar, and a buffet with a “2011” ice sculpture at its center, started to fill up at about 7 pm. The show began at 8, featuring the Ixtacihuatl dance company, named after a dormant volcano, in its turn named after a legendary Aztec princess. Mexican folkloric dances were followed by rock and roll, tango, swing, belly dance, and Brazilian carnival numbers, all performed in gorgeous costumes to live music. I learned that in the warm season, the company performs at the hotel every weekend.

After the show, the dance floor was open to all. I couldn’t quite remember the last time that I danced so much and with so much pleasure, surrounded by a joyous crowd of local families from toddlers to grandmas, hotel guests and staffers – mingling, laughing, and just having fun. At midnight, a collective champagne toast was accompanied by hundreds of colorful balloons falling from the ceiling, and the party went on and on.

Strangely, neither of us got any back or foot aches the next morning, most likely because we spent it in the hotel spa. Our masseuses, Marta and Margarita, worked on our computer-crippled backs and shoulders. Our massages were followed by hot baths and cups of apple-cinnamon tea. Taking a short nap in a relaxation room, I was daydreaming that this mansion was mine, and that my bliss would last forever.

There were many more things, though, waiting to be discovered in and around Playas de Rosarito. Isaias Flores, of GoBajaEasy, took us to Popotla Boulevard. There, block after block was lined with artisans’ wares that ranged from brightly painted tiles and pots to cast-iron garden sculptures and furniture.

We stopped at the Calafia Cultural Center, near a “historic landmark” hill that has been considered the separation line between Baja and Alta California since the 1700s. The Calafia’s founder, Don Sixto Acevedo Perez, started an educational institution here which now includes a collection of Aztec and Mayan art, a museum of Mexican architecture, a library, and a hotel under the direction of his son, Conrado Acevedo Cardenas, a historian, book author, and cinematographer.

Then we ventured into what looked like a movie set – the fishing village of Puerto Nuevo, where every single restaurant serves a specially prepared local lobster – deep fried, and accompanied by rice and beans. We had ours at Restaurant Puerto Nuevo II, owned by the Plascencia family, one of a few longtime residents of the area.

On another trip with Isaias, we visited one of the 40-plus wineries of Valle de Guadalupe. We stopped at Bibayoff, founded in 1905 by the Molokans, religious refugees from Russia. The current winery owners have Slavic faces but speak very little of their native tongue. They maintain their ancestral legacy with a small museum of Russian costumes, lace, household items, books, and photographs. 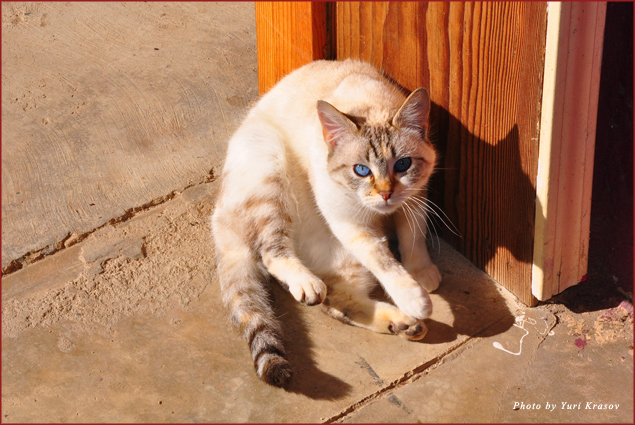 Even the winery cat has blue eyes (if you visit, please feed the poor thing – she was pregnant and therefore always hungry).

We moved on to some degustacion at the nearby L. A. Cetto, Mexico’s largest wine producer, which also owns a huge open-air event facility and a bullfight circus. Then we sat down on a sunny terrace of La Casa de Dona Lupe, where we met its lovely owner, Dona Lupe, who produces an enormous number of homemade olive oils, jams, preserves, and other goodies in addition to excellent wines.

On our way along Ruta del Vino we spotted the newly opened Capule restaurant, named after a large tree in its yard, and stopped there for lunch.

Back in town, our favorite eating place was on the main drag, Benito Juarez Boulevard, just steps from the hotel. El Nido (the nest), owned and operated by Lupo Perez, has been a local landmark since 1971. El Nido is popular with romantic couples and those who know their food – they come from near and far. Set in an old brick building with patios, passageways, small and large dining rooms, and even a tiny chapel, El Nido is as cozy as a nest, and as wild as a jungle. It has tropical plants growing from the walls, with streaming waterfalls among them; bird cages with chirping love birds; a bubbling creek with fish and turtles; antique gadgets and art pieces; lamp shades made of cirio cactus; fire ovens, a bakery, and a tortilla maker. All food preparations are done right in front of you. 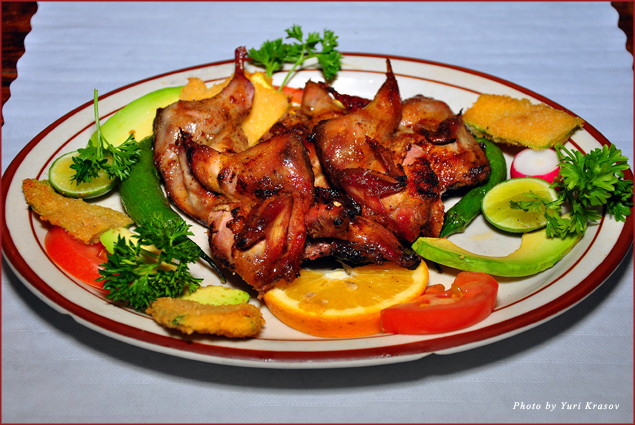 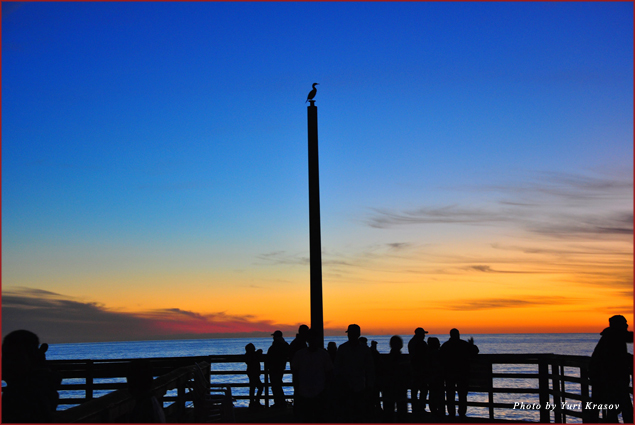 Every evening, before the sunset, we made it a habit to walk upon the wooden pier built by the hotel in the 1990s. It goes far enough into the ocean to grant a view of playing dolphins, or even passing whales whose season starts mid-winter. On our last night at the hotel, the sky was clear, and the flaming sunset was especially beautiful.

The First Ever Baja Book Festival Is Oct. 9th