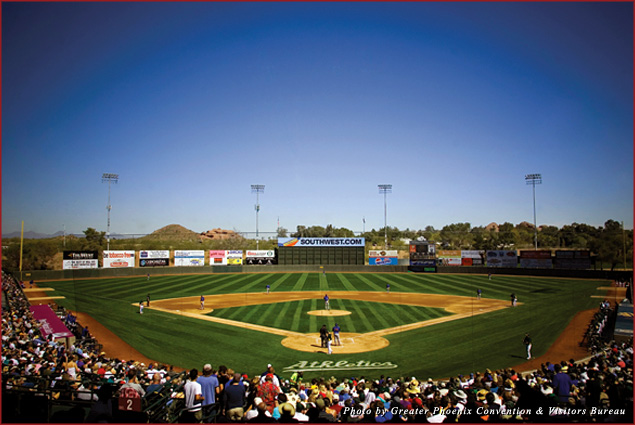 Every year in about mid-February there is a tingling of excitement. In the back of my mind this expected thrill engulfs me as I realize baseball spring training is right around the corner. I must admit it is one of my favorite times of year and has become an annual ritual. What can beat sunny days and beautiful weather in Phoenix, Arizona, while enjoying America’s favorite past time? It’s the reason I fell in love with this city.

In the Cactus League, there are 10 intimate stadiums—accommodating 8,000 to 12,000 fans—that lead to an incredible fan-friendly experience. With this type of setting you become best friends with the person next to you, and there is this type of mingling only found in these stadiums. No oversized arenas. No 75,000 screaming fans pushing by. This experience is different; you can watch your favorite players on the practice fields before games and be greeted by them signing autographs as they hop from batting practice to fielding practice. And nothing beats grabbing a blanket and cheap seats to hang out in the outfield lawn with some good friends, kitsch baseball food, and baseball watching. 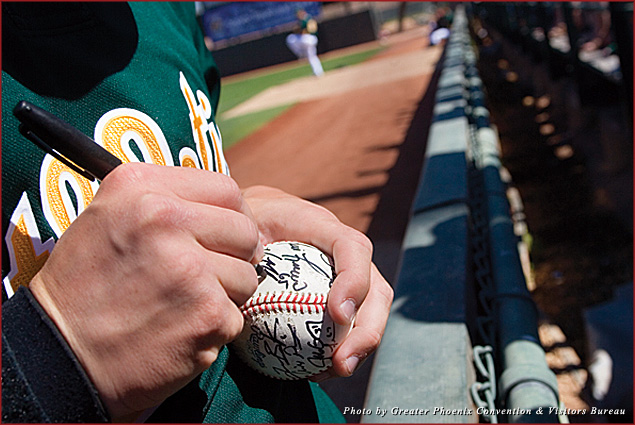 Each year I try to figure out how I can beat my game attendance compared to last. I must admit my first game ticket is already bought. My friends and I have already carefully laid out our plans to enjoy opening weekend of spring training. I call Central Phoenix (Cen Pho) my home, and it’s an easy light rail ride to Phoenix Municipal Stadium (home of the Oakland Athletics). This stadium laid its roots into Papago Park in the early 1960s. It is also the only one that is light rail accessible; the light rail stop is approximately a half mile from the stadium.

Some amazing hotels along the light rail are offering Cactus League packages, including Kimpton’s new Hotel Palomar at CityScape. Take in some pre-game brews at the hottest brewpub at CityScape, Copper Blues, which offers more than 60 brews including local ones on draft. Then it’s off to see the game!

Some other pregame rituals include craft beer tasting at Four Peaks Brewery, which offers its staple flavor, Kilt Lifter, when heading into Tempe at Tempe Diablo Stadium (home of the Los Angeles Angels of Anaheim); filling up on tasty Mexican food and margaritas at The Mission by Scottsdale Stadium (home of the San Francisco Giants); and catching the shuttle from Zipps to Salt River Fields (home of the Arizona Diamondbacks and Colorado Rockies). Another shuttle option from a multitude of entertainment venues and restaurants is offered from Westgate City Center to Camelback Ranch Stadium (home of the Los Angeles Dodgers and Chicago White Sox). You could also rent a party bus with friends and head to a stadium on the outskirts, Peoria Sports Complex (home of the Seattle Mariners and San Diego Padres). Last but not least, the only stadium that allows tailgating (at least that I know of) is Hohokam Stadium (home of the Chicago Cubs). 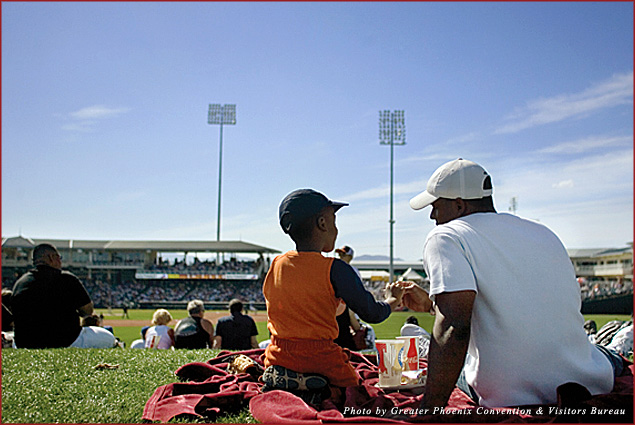 The best things about spring training in Phoenix are the ability to stadium hop, checking out all 10 stadiums here in Phoenix, and to discover something interesting and different from one to the other. So enjoy some good weather, great food, and some fun ball games.

To tell you a bit more about Cactus League:

All of you die-hard baseball fans will be happy to know that this year’s spring training begins earlier than normal—on February 22—because of the Baseball World Classic (BWC). This tournament brings international teams together to play until a World Champion is named. Teams that will go head-to-head are the United States, Mexico, Italy, Canada, and Asia. While the BWC is taking place, fans will still be able to watch the Major League Baseball teams play a series of exhibition and practice games. 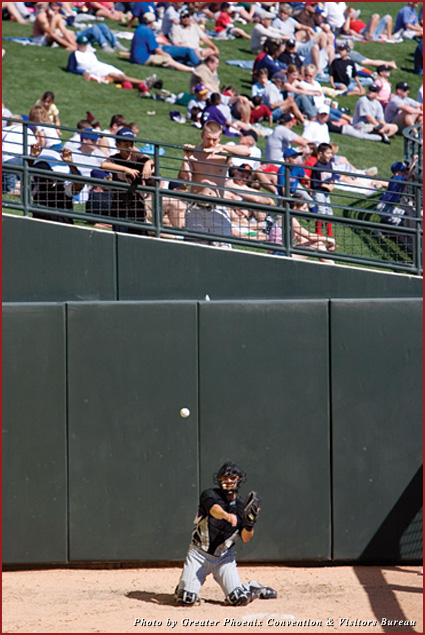 Since the Phoenix area has so much to offer, the fun doesn’t have to end after the game is over. Near every stadium where the games are played there are restaurants, bars, activities, and other forms of entertainment. When I go to Maryvale Stadium (home to the Milwaukee Brewers), I always head to downtown Phoenix afterward to hang out since it is in close proximity and there is so much to do, including visiting CityScape or hitting up a local restaurant such as Pizzeria Bianco or Angel’s Trumpet Ale House.

A few of my favorites near Peoria Sports Complex are Kabuki Sushi and Grill, FuNuGyz Sports Grill, and Sky Zone Indoor Trampoline Park, where adults can jump around with the kids. If you don’t want to travel too far, right across from the stadium is an area that offers different places to get food and drinks. Or, if a museum is more your thing, be sure to tantalize your ears at Musical Instrument Museum, immerse yourself in Native American artifacts at Heard Museum, or explore acclaimed architectural design by Frank Lloyd Wright at Taliesin West.

Since the Cactus League will be in full swing soon, fans can also take advantage of deals taking place around the Phoenix area at local hotels and resorts:

The Hotel Palomar, which is centrally located with easy freeway access to the spring training stadiums, has a Batter Up Package. The package combines discounted room rates with complimentary game-day goodies throughout the month of March, allowing fans to hit one out of the park with the perfect baseball-centered vacation.

The Ritz-Carlton, Phoenix is conveniently located within a 27-mile radius of all 10 Phoenix stadiums so you’ll be right in the heart of all the action. Along with the striking city and mountain views from deluxe accommodations, you will enjoy maps and directions to all spring training facilities, Cactus League game schedules, an American breakfast for two at bistro 24, complimentary overnight parking, and an exclusive spring training amenity.

At the Montelucia Resort & Spa, guests stay in luxury at this centrally located Scottsdale resort with easy access to all 10 Spring Training stadiums. With the Homerun Package, baseball fans can book three nights and get the fourth night free and receive a $50 credit to the new CENTRO Lounge, where fans can catch all the spring training action on the nine-panel media wall.

At The Westin Kierland Resort, guests can receive a special discount at Agave, the Arizona Spa. Before or after taking in a Cactus League baseball game, receive 20 percent off any 50-minute a la carte spa or salon service simply by presenting your ticket. 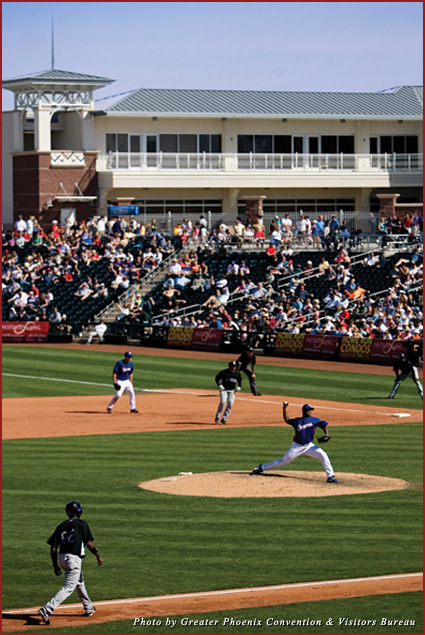 From February 22 through March 30, there are multiple games held everyday. Check out the 2013 spring training baseball schedule and get your tickets today.

For more information about Phoenix and what else you can do between games, go to the Visit Phoenix website.