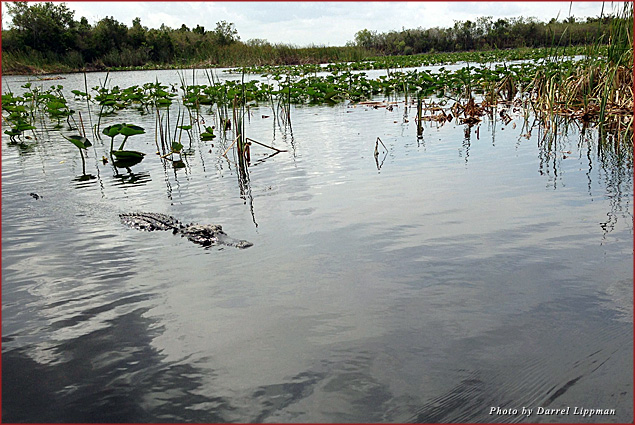 Just a few minutes before “Jumper” swam lazily beside the boat, Captain Rick warned his passengers to keep their arms safely inside. Even though the eight-foot gator didn’t seem to be sizing us up for lunch, I decided to heed the captain’s advice and snap some pictures with a keen eye on my limbs.

I’ve been traveling to Florida since the age of five, and my childhood vacation memories are many (several Disney World trips, Miami Seaquarium, Parrot Jungle, etc.), but the one tourist activity that had been missing up until now was seeing The Everglades up close and personal. With a set of grandparents who lived in Miami Beach, my dad used to pack up our family on numerous Christmas holiday school breaks for the two-day drive from New Jersey down to the Sunshine State. So it was fitting I would eventually return to experience my elusive tourist attraction with my own three kids during their 2013 Spring Break. 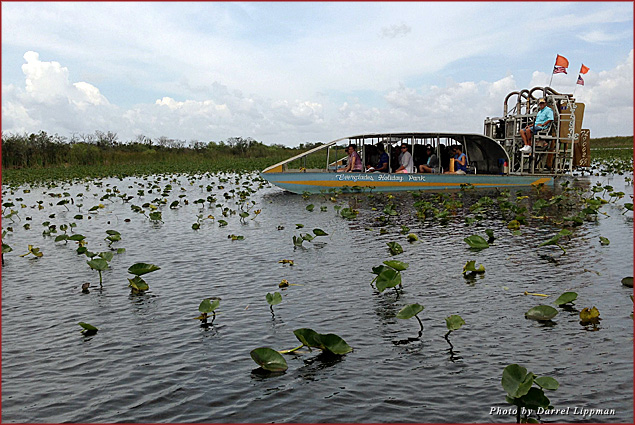 Captain Rick, a weathered, longhaired version of Tom Selleck, announced we were in good hands because he was a 43-year veteran plying the waterways of the Everglades. For the next hour, he would prove to be an affable airboat driver/tour guide for our adventure in Everglades Holiday Park (about 30 miles west of the Fort Lauderdale beach areas).

With an alligator population of more than half a million—and some males measuring up to 15 feet, according to Captain Rick—the Everglades and all its wildlife awaited us as the boat accelerated toward a fork. A short time later, the engine died.

The Everglades were not a place where you want to run out of gas, said Captain Rick. 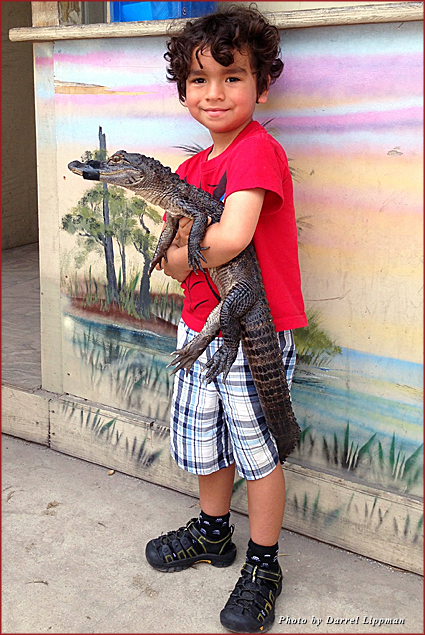 “Did we really run out of gas?” asked my 5-year-old son, Xander. No, our captain merely wanted everyone’s attention for a few more Everglades anecdotes and fun facts, among them that this protected habitat totals more than 5,000 square miles. 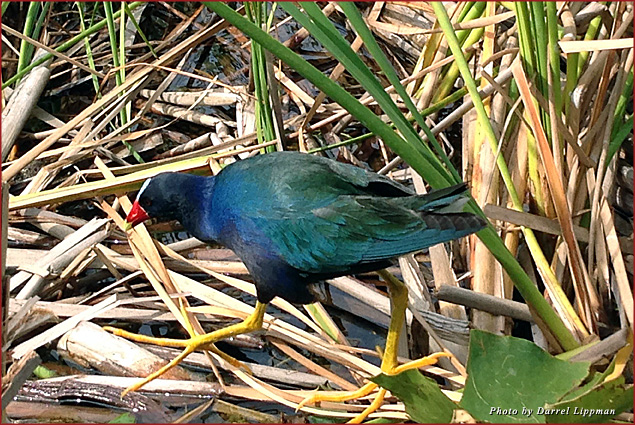 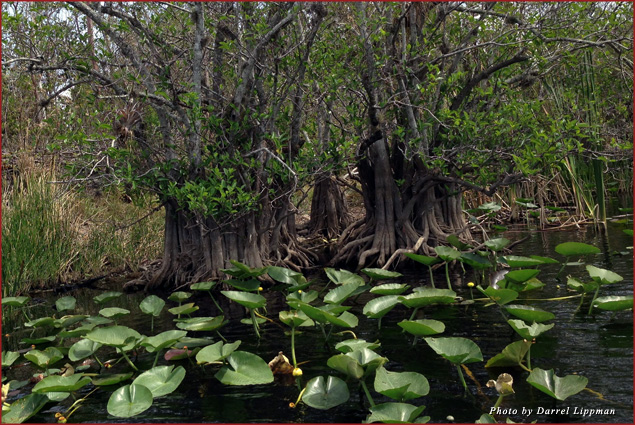 Including Jumper we saw just two gators, but that’s certainly better than not seeing any at all (on warmer days than ours, the alligators are less likely to come to the surface), and we also spotted an array of birds (mostly grackles, herons, egrets, and the colorful purple gallinule, a chicken-like swamp hen with yellow feet), one turtle, and a good-sized iguana napping in a tree. Amid the flora and fauna were some indigenous air plants hanging from the multitude of pineapple mangroves. 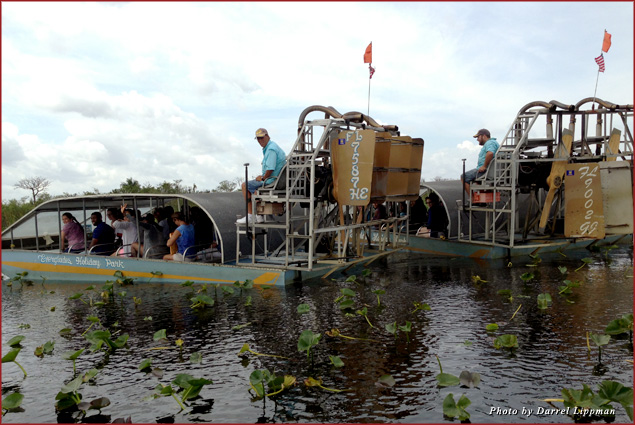 And just when you thought the excursion might be 100-percent nature tour of the captivating ecosystem, Captain Rick maneuvered the boat into some open water with two other boats for what he dubbed “Airboat Wars”—basically a trio of airboats spinning in circles (the equivalent of a parking lot made of water) and spraying the passengers with the respective rear propeller fans.

There were also two nifty stretches where Captain Rick put the pedal to the metal and raced the boat a la an amusement park thrill ride (the kiddies really enjoyed when he swung the boat sideways and continued moving forward, giving passengers a view of the boat’s wake). Next to seeing a real live alligator, this might have possibly been my 9-year-old son Troy’s favorite part of the day.

Moments later when gator No. 2 swam by, my 6-year-old daughter Athena asked, “Is he going to be in the show?” 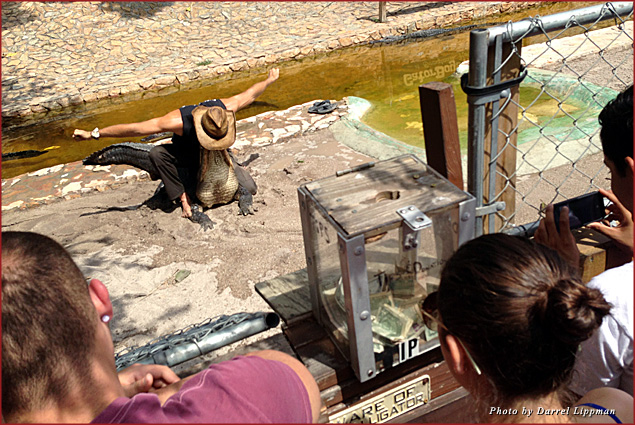 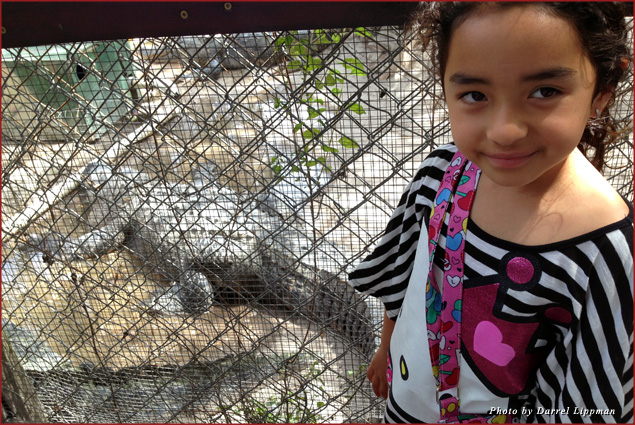 Probably not, I answered, but the 20-minute alligator show that followed the airboat ride did cast many other reptiles, including a couple of baby gators that could be held for a photo op at $5 a pop. Presented by Animal Planet’s Gator Boys Alligator Rescue, this portion of the park admission (regular ticket prices are $25 for adults and $12.50 for children, but there are discounts when ordering in advance on the Everglades Holiday Park website treats guests to some brief hijinks between gator and host, including the obligatory gator-jaw-being-held-open/closed-with-host’s-own-chin stunt.

While your group waits to be called for the airboat excursion, there are covered tables for a picnic lunch as well as a snack bar for items including “Gator Bites” (think chicken nuggets with gator meat instead of chicken). While eating, the kiddies spotted a peacock sheltering itself from the sun under an eave on the roof of the gift shop.

Everglades Holiday Park also has a boat launch for personal fishing craft and offers boat rentals (the Everglades is home to some of the best large-mouth bass fishing in the United States) as well as professionally guided trips with rods included. There’s even a fully stocked bait and tackle shop.

When the swamp waters settled, Everglades Holiday Park was a very worthwhile half-day side trip to any Fort Lauderdale area family vacation, so bring your camera (preferably strapped to your wrist for those shots from the airboat!) and get up close and personal with the Florida Everglades.

If You Go to the Florida Everglades…

Fort Lauderdale sits in the middle of two other popular beach cities: West Palm, about 50 miles to the north, and Miami, just 35 miles due south. Fort Lauderdale-Hollywood International Airport airport is a great option compared to the much larger Miami International Airport and serves as a nice base to visit Southern Florida’s best sightseeing spots.

Spanning 23 miles of sun-drenched shoreline, Greater Fort Lauderdale’s beaches are within easy walking distance of hotels, restaurants, and other attractions including Butterfly World (right near my parents’ condo in northwest Broward County’s Coconut Creek), a three-acre outdoor kingdom featuring more than 80 species of the winged wonder from places such as South/Central America, the Philippines, and Malaysia.