Escape to Maui and the Four Seasons Resort Maui at Wailea 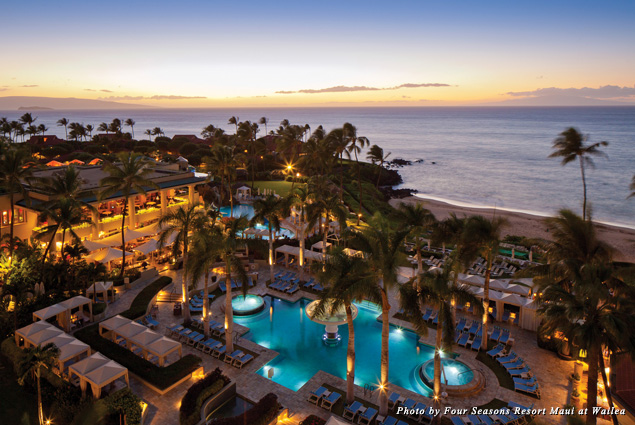 Seattleites survive winter with frequent trips to Hawaii. This message had been drilled into me since moving to the Pacific Northwest. Five winters later, I had endured enough and booked my plane ticket. I chose Maui for its beautiful beaches and spectacular scenery. I chose the Four Seasons Resort Maui at Wailea for its luxurious accommodations and prime beachfront position on the sunny side of the island.

The Four Seasons experience began at the airport. Greeting us with a sign, our driver whisked our luggage and us away to a private area where a sleek Tesla S85 sedan was parked. Following a 30-minute ride to Wailea, we arrived at the Four Seasons where we were presented with flower leis and ginger mint lemonade before being shown to our room. 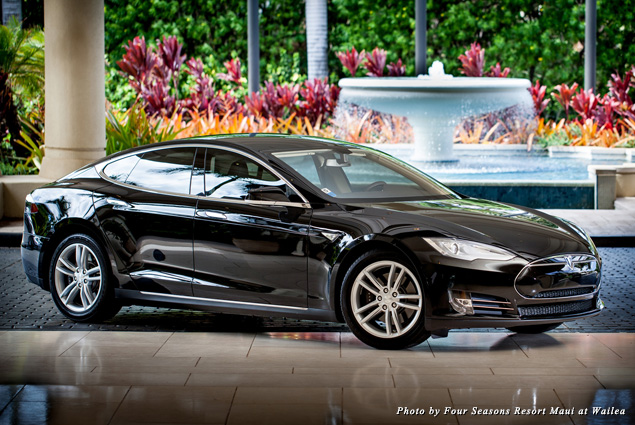 Our guest room—one of the resort’s 305—featured a sitting area, spacious bathroom, and private ocean-view lanai and felt like a mini suite. The room’s dark woods and marble accents had a luxurious and sophisticated feel. The resort also offers 75 luxury suites and, for an even more personalized experience, 26 rooms or suites on the Club Floor, which come with their own concierge, all-day refreshments, and a full-service bar. 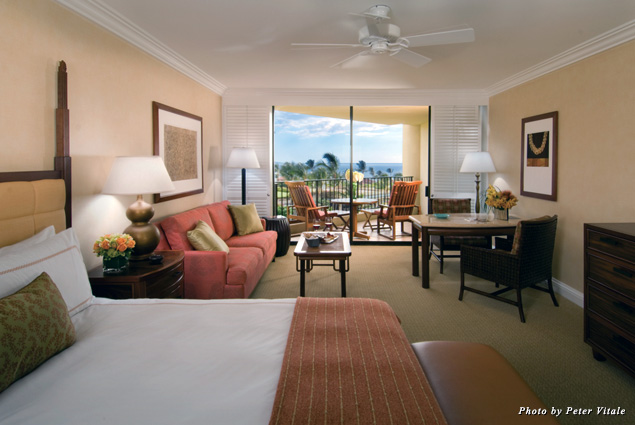 All of the resort’s rooms and suites offer amenities such as luxurious bathrobes, a pillow menu, and complimentary wireless Internet access. Housekeeping provides a nightly turndown service. Marble bathrooms are equipped with deep soaking tubs and glass-enclosed showers. 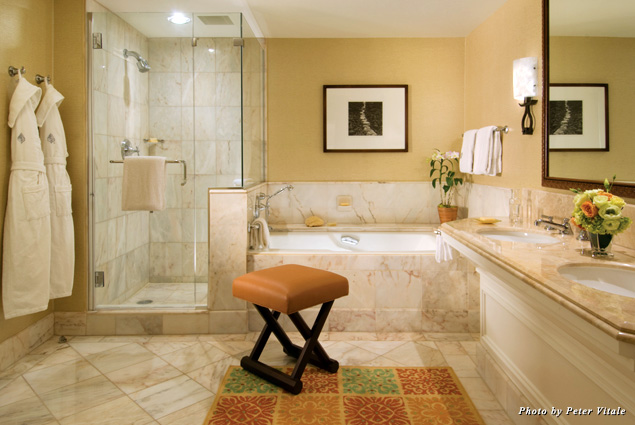 After quickly unpacking and changing into more appropriate clothing for balmy Hawaii, we were out the door. As any trip to Hawaii should begin, we made a beeline for one of the resort’s bars, Ferraro’s, for a Mai Tai served in a pineapple. 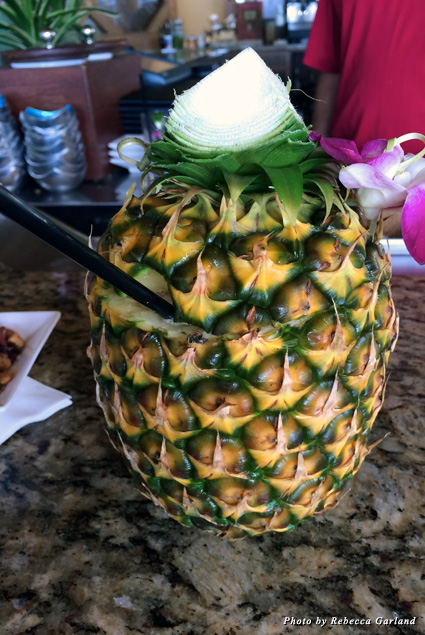 Once we had relaxed into Maui mode, it was time to explore. The resort’s landscaping is gorgeous with perfectly manicured lawns and fragrant tropical flowers. But the natural beauty of the location steals the show. Crescent-shaped Wailea Beach is touted as one of the best beaches on Maui with golden sand and gentle waves. 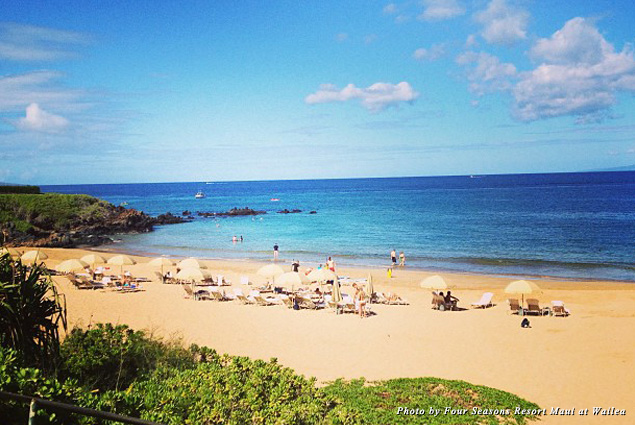 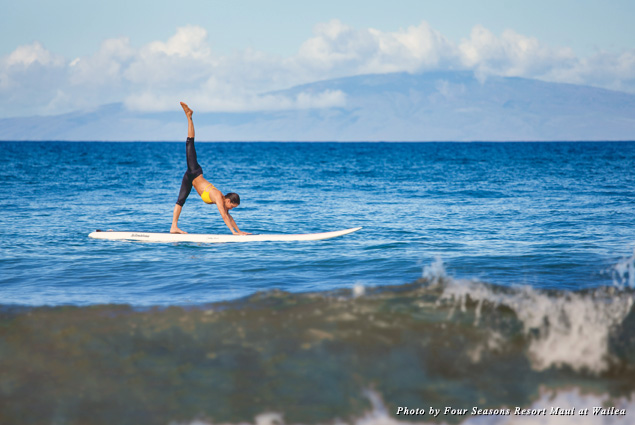 Back on dry land, the Four Seasons has a variety of complimentary activities and equipment including beach volleyball and a croquet course. When the weather isn’t cooperating, the resort’s game room provides billiards, ping-pong, table shuffleboard, and three gaming systems (Wii, PS3, and Xbox 360).

To explore outside of the resort, the Four Seasons offers complimentary shuttle service within Wailea. The concierge can also assist with off-property activities such as helicopter tours, horseback riding, volcano excursions, and ziplining. The Wailea Beach Walk, a paved walkway situated above the beach, is a popular activity and crosses directly in front of the resort. 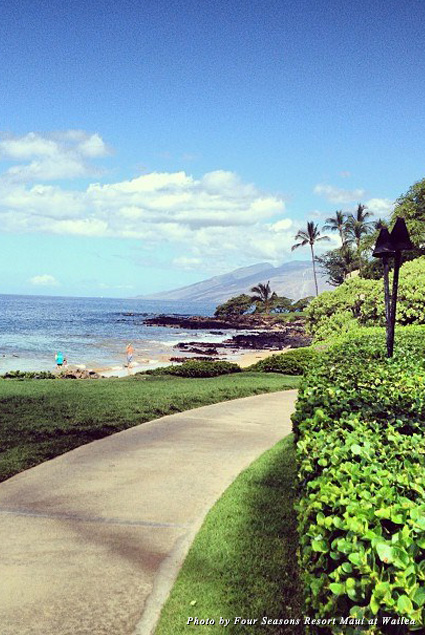 Another worthwhile activity, shopping, is readily available onsite. The resort’s largest boutique, Cabana, offers clothing and accessories for men, women, and children. Additionally, 22 Knots features high-end fashion and jewelry from brands including Lanvin and Jimmy Choo. The resort also has a sundries boutique, Ports, and hosts an open-air art gallery featuring local artisans every day from 8 a.m. to 1:30 p.m. 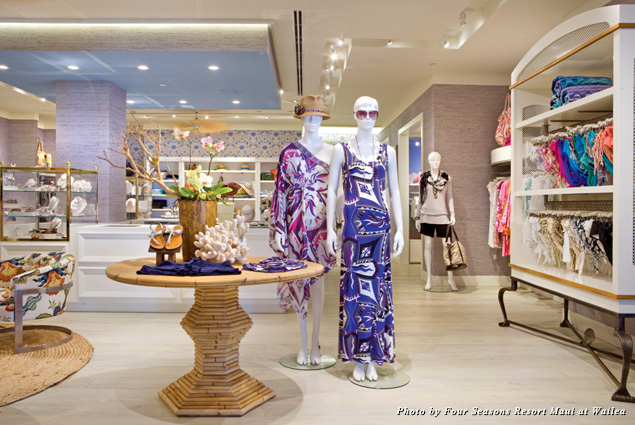 In case you need something more than shopping to get your heart rate up, the resort’s fitness facility can easily persuade guests to workout. A row of elliptical and step machines, treadmills, and bikes are situated in an indoor-outdoor area, allowing you to watch the personal televisions or enjoy the breeze. The resort also offers an indoor weight room and a revolving menu of fitness classes, including ocean-view yoga and, fitting for Hawaii, “Hula Fit.”

If tennis or golf is your preferred workout, the Four Seasons has you covered. The resort has two tennis courts, where guests can participate in tennis clinics with instructors including tennis star Andy Roddick’s former coach. Golfers enjoy special privileges at three nearby off-site courses in Wailea: Blue Course, Gold Course, or Emerald Course.

If your idea of a Maui vacation includes more rest and relaxation than action, the Four Seasons excels at leisurely activities as well. The resort boasts three pools, each with a completely different crowd and feel. The Fountain Pool, the resort’s main pool, features a fountain and is flanked by hot tubs at each end. The pool attracts both couples and families. The nearby Keiki (Kids) Pool is a lagoon-style pool complete with a slide.

Tucked away at the edge of the resort, the Serenity Pool is an adults-only retreat complete with a swim-up bar and underwater music system. Six luxury cabanas can be reserved for a fee and are equipped with mini-refrigerators stocked with champagne, flat-screen televisions, and couches.

The majority of the cabanas at the Four Seasons, which are located near and around the Fountain and Keiki Pools, are complimentary. During our stay at the resort, we gravitated to an ocean-facing cabana, which gave us the perfect vantage point to watch humpback whales spouting and breaching throughout the day. Lee was our cabana attendant, and his friendliness and ability to anticipate our needs made already great days even better.

Another pool attendant, Rowena, made our stay at the Four Seasons extra special. Each morning, Rowena would circulate through the lounge chairs and cabanas offering mini blueberry and coconut muffins and fresh pineapple. And each afternoon she would be back with treats to cool us off inclduing flavored freezer pops and Evian spritzes to the face.

When you’ve had enough sun but not enough relaxation, pay a visit to the spa. The spa offers an array of treatments including lomi lomi massages and Hawaiian healing wraps. One of the most interesting spa offerings is an aquacranial treatment performed while floating in the ocean. Spa therapists will also come directly to your poolside cabana for massages and facials. Or enjoy a massage in one of the hales (thatched-roof huts) by the beach.

With the plethora of activities at the Four Seasons, guests need plenty of sustenance. Breakfast is served each morning at DUO, where you can opt for either the buffet or a la carte. The buffet offers an omelet station, pancakes and waffles, bacon and sausage, breakfast potatoes, fruit, yogurt and cereals, cheese and charcuterie, bagels, and pastries. DUO also has a build-your-own smoothie bar.

Lunch options include ordering off the poolside menu, sitting down to a meal at Ferraro’s, or strolling the short distance down to the snack bar, Snorkels, for a sandwich and chips. Two of my favorite poolside lunches were the BBQ pork nachos and the fish tacos, which I enjoyed in the cabana.

The Four Seasons’ Lobby Lounge hosts pre-dinner happy hour with specialty cocktails, sushi, a hula dancer accompanied by live Hawaiian music, and a perfect spot to perch on a barstool while watching the sunset. As the sun goes down, the torch-lighting ceremony is held each night around the resort’s grounds.

Dinner options at the Four Seasons include Ferraro’s, DUO, and Chef Wolfgang Puck’s Spago. Each restaurant succeeds in offering its own twist on delicious Hawaiian dining.

Walking in to Spago, I was struck by the restaurant’s contemporary design. The space was a blend of dark hardwoods and stone, all of which set the backdrop for the stunning ocean view. Upon studying the menu, I noticed some classic Wolfgang Puck fare but with a Hawaiian-inspired twist.

On our server Peter’s advice, we ordered the spicy ahi tuna poke in sesame miso cones. The cones were as delicious as they were visually appealing; it was easy to see why they are considered one of the most popular appetizers at Spago. We followed that up with steamed opakapaka (a fish native to Hawaii) and jasmine rice and Big Island seared ahi tuna served with a wasabi-yuzu butter sauce.

We had previously eaten lunch at Ferraro’s, but the dinner service transformed the restaurant. What was a nice but casual lunch spot during the day turned into a more formal affair for dinner. We were seated at a white tablecloth table with amazing views of the beach and the sunset.

Our server, Gerry, presented us with an iPad loaded with the cocktail and wine list. The highlights of our meal included beef carpaccio, a crudo of ono with lemon and thyme oil, hapu’u (Pacific sea bass) with lima beans and Kona lobster ragu, and ciabatta bread baked in Ferraro’s bread oven.

Though we had already eaten fantastic breakfasts at DUO, we did not dine at the restaurant for dinner until close to the end of our stay. We shouldn’t have waited. Upon being seated, I ordered a cocktail and enjoyed the view of the Fountain Pool from our open-air table.

When we were having trouble narrowing down appetizers, our server, Chad, suggested the chef create an appetizer sampler for us. It was the perfect idea, allowing us to try the pork belly buns with lilikoi chili sauce, seared scallops with truffled butter leeks, and sashimi with citrus segments, chili water, cilantro, papaya seeds, and Hawaiian sea salt.

For entrees we selected the house specialty: steak. My indecisiveness again got the best of me when it came time to choose which sauces to order alongside my filet mignon. Chad again came to the rescue, suggesting a small sampling of each of the 10 sauces, including chimichurri and truffle merlot. We paired the steak with a Cabernet Sauvignon and two sides: a healthy pan-tossed baby spinach and a decadent truffled mac & cheese.

For dessert I couldn’t resist the chocolate soufflé served with raspberry sauce. Meals at DUO always end with a heaping plate of cotton candy for the table. Though I didn’t feel like I could eat another bite, I singlehandedly ate the giant mound of pink cotton candy.

With my daily food overindulgence I had two options: spend half of my vacation in the gym or have liposuction. (Kidding … kind-of.) In 2013, the spa at the Four Seasons Resort Maui became the only Hawaiian location to offer i-Lipo, a non-invasive, laser body-shaping treatment. No pain and no downtime? I was game.

I arrived at the spa and enjoyed the relaxation room before my consultation with Dr. Mark Emerson, who administers the i-Lipo treatments. I learned in addition to i-Lipo, Dr. Emerson also provides chiropractic treatments and nutritional analysis for guests at the Four Seasons, assisting with the resort’s Wellness Program.

Dr. Emerson explained i-Lipo as a low-level laser treatment that works to tighten skin, reduce cellulite, and contour bodies in various problem areas such as the abdomen and thighs. I chose my “problem area,” and after measuring me to obtain a baseline, Dr. Emerson went to work. The experience was quick and pain-free. Two days later I had my second i-Lipo treatment. After the treatment was over Dr. Emerson measured me. I had lost 3.6 inches.

The i-Lipo treatment is not the only offering unique to the Four Seasons Resort Maui. The resort also offers a program called Unforgettable Events, which include experiences such as the Wailea Tennis Fantasy Camp taught by such tennis greats Michael Chang and Lindsay Davenport and Maui Cycling Camp led by Tour de France veteran and Canadian Olympian Ryder Hesjedal.

On our last morning at the Four Seasons, we dropped by our regular cabana. As Rowena made her rounds, I told her it was our last day in Maui. She hugged me and made me promise to come back. No matter the season in Seattle, returning to Maui and the Four Seasons is an easy promise to keep.