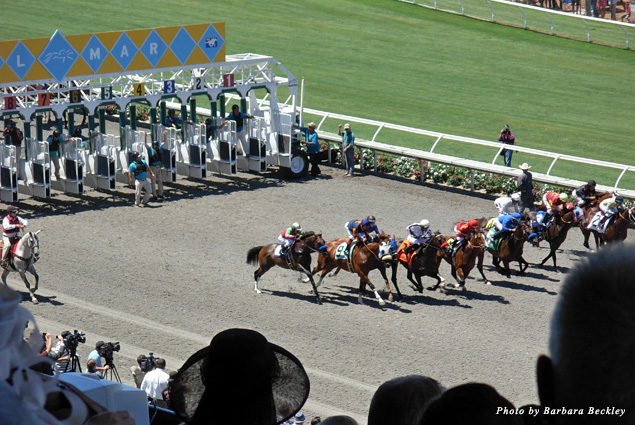 Women in big hats. Men in sophisticated suits. It was smiles, hugs, and champagne all around as San Diego’s beautiful people gathered for Opening Day at the Del Mar Racetrack on July 17, 2014.

This was my first time at Del Mar—even though I’m a lifelong Southern Californian and graduated from San Diego State University—and I was thrilled. Opening Day, with 42,000 attendees dressed in today’s version of glamorous “My Fair Lady” ascot finery, was the perfect introduction to this storied course, which, appropriately, was opened by Hollywood movie stars—notably Bing Crosby—and Paramount Studios in 1937.

“This is the biggest social event of the year.” I heard the gentleman seated at a private terrace table in the posh Turf Club say it, as he glanced up from his racing form; and the two European gentlemen say it as they sipped wine standing on the field below the Grandstand; and the couple next to me near the Winners Circle, who owned a thoroughbred contender in the fourth race, say it as I cheered their horse (it didn’t win); and the giddy girls and guys say it as they sipped champagne on the upstairs terrace of the Blue Moon Celebrity Grill and watched the trainers and race horses on the Paddock below. 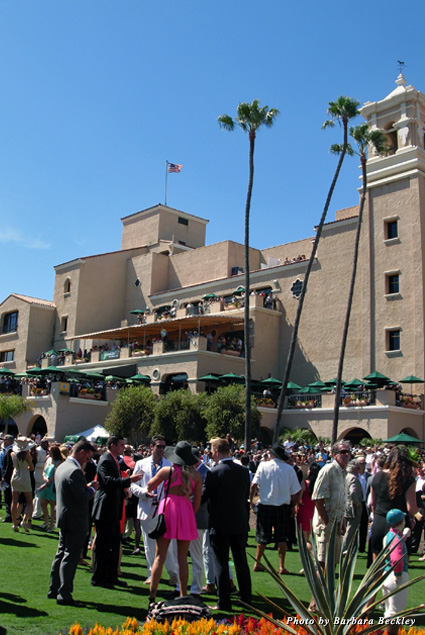 And so it was. The Opening Day ambiance was something special. Joyous comradery permeated the beautiful Mediterranean-style racing complex wherever I went. The racetrack’s glorious setting—on the beach with a backdrop of the sparkling Pacific Ocean and swaying palms—added to the charm. It was as if 42,000 friends had gathered for a private party to cheer on the ponies. Everywhere people were smiling and running up to hug friends they haden’t seen in months. Celebrity chef Bobby Flay, San Diego Chargers coach Mike McCoy, Lucie Arnaz (daughter of Lucy and Desi), actor Jayson Blair, and professional poker player Phil Ivey (net worth $100 million) shared in the fun, no doubt from the exclusive Directors Room.

Of course there was a hat competition, and this was the 20th annual Hats Contest. Her racetrack chapeau was a shoe-in, I thought. But that was before I saw women wearing hot air balloons, a Parisian street seen complete with the Eiffel Tower, full blown English gardens, a faux bird in a birdcage, and huge blousy blooms. Marie Antoinette would have been proud. 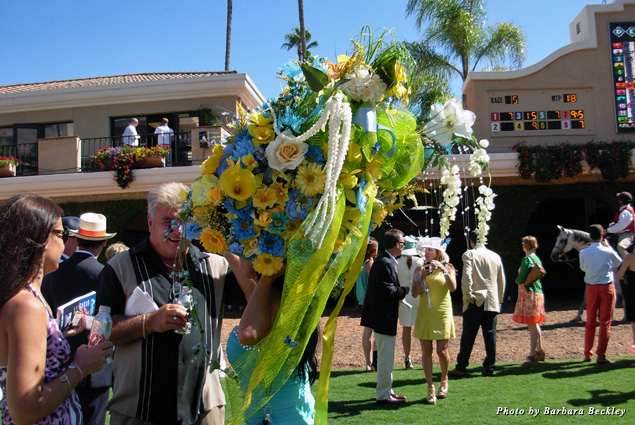 The beauty and speed of the magnificent thoroughbreds was the high point of the day. I was lucky to have entry to the flower-filled Paddock and be within feet of the gleaming steeds as their trainers prepped them for each race. The British-like accent of legendary racing commentator Trevor Denman, “the Voice of Del Mar,” added to the adrenaline rush as we watched the horses race around the one-mile track and held our breath for the winner. Del Mar is the nation’s No. 2 racetrack in daily average attendance and daily average money wagered. (Sarasota Race Course in New York is first.) Del Mar Opening Day saw nearly $15 million in bets placed—4.9 percent more than last year.

“Go with number eight and nine in the tenth race,” the dapper gentleman on the Turf Club terrace told me, when I asked for advice. Besides having an A-list corner table overlooking the finish line, his spreadsheet-like racing forms told me he knew what he was doing. I didn’t have a chance to test his clairvoyance—though I learned later he was right—because I was whisked off to the Opening Day After-party at the sumptuous Rancho Valencia Resort & Spa, just a few minutes away in upscale Rancho Santa Fe. 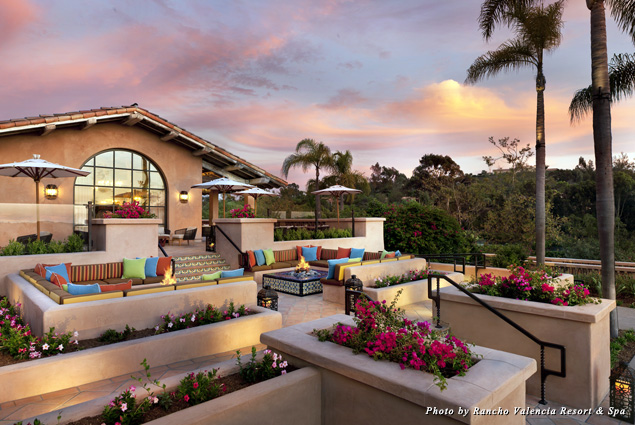 Rancho Valencia introduced its Del Mar Opening Day After-party last year to show off its then newly completed $30 million renovation. The party was such a success it quickly became a must-see-and-be-seen soiree (think Vanity Fair’s Oscar after-party), so the resort planned to make it an annual tradition.

Twinkly lights illuminated the spacious terraces and manicured Croquet Lawn outside the casually elegant Pony Room bar and restaurant (one of several new features added during the renovation), creating a garden-party ambiance for the more than 500 racing fans that came to bask in this year’s Opening Day after-glow. Guests danced to a Latin rock band, sipped cocktails, and enjoyed Maine lobster sliders and other of the Pony Room’s rustic American cuisine. I relaxed on plush cushions in the built-in couches around the terrace fire pits, sipped a delicious 7th Chukker’s Cucumber Rose signature cocktail (chukker is a polo term, the barman explained) handcrafted with Hendrick’s gin, St. Germain, fresh cucumber, and fresh-squeezed lime juice, and chatted with David Shipman, the resort general manager. The Opening Day After-party is free to enter and open to the public, but you must make reservations, he said. I made a mental note for next year.

As Shipman explained about the multi-million-dollar revamp: “Nothing was changed but everything about the resort was improved, and new luxuries and facilities were added.” As Southern California’s only Relais & Chateaux property, it was already gorgeous; the redo put it over the top. The well-loved public spaces were embellished with Mediterranean-style details, and its 45 acres were lushly landscaped. Two new restaurants—the Pony Room and fine-dining Veladora, which serves coastal ranch cuisine created from the bounty of Chino Hills Farms and other nearby gourmet growers—were opened. The fitness center was expanded, a new spa pavilion was created, the 18 championship tennis courts were resurfaced in Plexipave, and a dedicated tennis pro shop was opened. 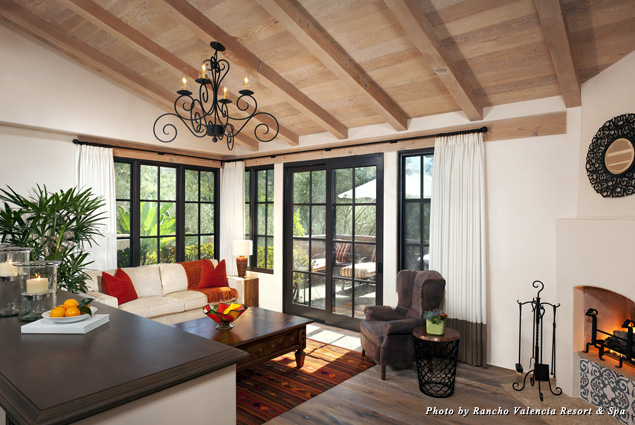 I was overnighting at the resort, so I experienced firsthand the luxurious makeover of one of the 49 hacienda-style casitas. As the after-party wound down, I followed a garden path meandering under flowering trees and around the elegant pool to my suite. At 1,000 square feet, it could easily double as a Rancho Santa Fe guesthouse. The sunken living room with a fireplace, vaulted ceiling, gigantic bath with a deep soaking tub, steam shower, walk-in closet, and private garden were elegantly residential. Original art complemented the custom-crafted furnishings. Complimentary in-room amenities including snacks and stocked mini-bar added to the luxury. No surprise celebrities—who must remain nameless—frequently cozy up here for R&R, according to Shipman. I made an espresso with the in-room espresso/coffee machine, relaxed under the stars on my patio, and called it a night.

In the morning, I strolled through the gardens to the sumptuous spa, one of Conde Nast Traveler’s 2014 “Top 25 Spas of the World.” A walled courtyard embraced the spa complex in lush foliage, creating a hideaway of pampering serenity. The amenities include 10 treatment rooms (including two couples’ rooms) opening onto private gardens, a pool and cabanas, a Yoga Pavilion surrounded by water, a Pilates studio, advanced exercise programs, and lush treatments from wraps to facials.

I enjoyed the 60-minute Firming Facial, which promised to “boost and brighten” the skin’s firmness and radiance. Ama.la skincare products from Germany (Ama.la is exclusive to Rancho Valencia in Southern California) delivered on the promise under the talented guidance of esthetician Marla Galvin. This, honestly, was one of the best facials I’ve ever experienced, not only because of the results but also in the way Galvin answered my questions and provided sensible, straightforward beauty tips I will use for the rest of my life. Every spa technician is specially trained in the Rancho Valencia Spa methods, no matter how talented he or she when hired, she explained. 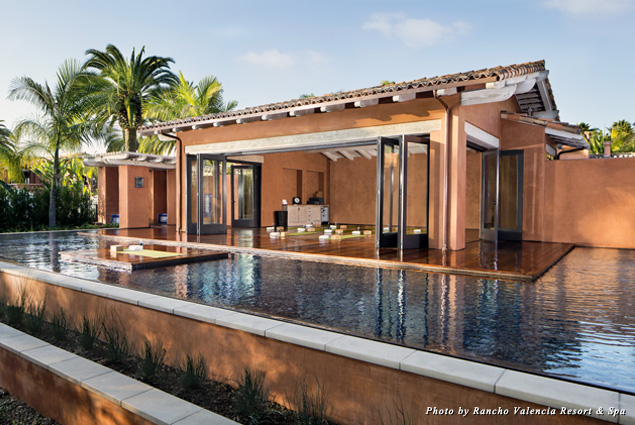 From spa heaven to a challenging tennis workout was a short walk between bougainvillea vines and citrus trees. This was my final activity before I checked out and it proved to be a memorable finale. I play tennis regularly, and I was honored to have two-time US Open champion Robin White showing me how to improve. White is the resort’s longtime tennis director and a prime reason Rancho Valencia is consistently ranked Southern California’s No. 1 Tennis Resort by Tennis magazine. With 18 top-of-the-line courts, several with grass-terraced stadium seating, White’s staff of experienced USPTA and USPTR certified pros run an extensive tennis program, including one-on-one and group lessons, match play, and a daily tennis clinic.

The Del Mar Racetrack Summer Racing Season is Wednesday to Sunday through September 3, 2014. In November, for the first time, Del Mar will introduce a Fall Racing Season starting November 7 through November 30, 2014. (This is due to the closing of Hollywood Park in Los Angeles.) Family Weekends are celebrated Saturdays and Sundays, with family-friendly activities for kids and parents and a 360-degree view of the thoroughbreds from the infield.

Rancho Valencia Resort & Spa rates begin from $483 a night. Specials include: “Stay & Play Tennis” package, featuring a one-night accommodation, a $175 per person tennis credit, complimentary use of the tennis courts, and access to the fitness center and movement studio with daily classes; “Bed & Breakfast” package, including an overnight stay and breakfast for two in the Veladora restaurant; “Rancho Valencia Golf Tour” package, with three nights’ accommodation and exclusive access to the Del Mar Country Club, the Crosby National Golf Club, and the Farms Golf Club adjacent to the resort.