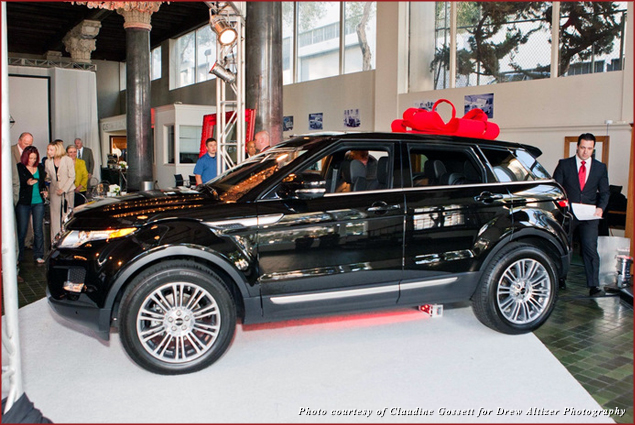 I was lucky enough to take Range Rover’s newest model, the Evoque, out for a spin. This isn’t your parents’ Range Rover. Evoque is the hip new model designed to appeal to a younger audience. This vehicle is completely new from the ground up, and is the first of many new models expected over the new few years.

Fittingly, it was introduced first in San Francisco during its United States debut. Guests were treated to a first look of the new SUV at an exclusive party held at British Motor Cars. A chosen few were allowed to test-drive these cars.

British Motor Cars was bestowed the honor of introducing Evoque. It is owned by the Qvale family, one of America’s most distinguished automotive dynasties. The family began work in 1947 importing MG sports cars to the US, later adding Rolls-Royce, Jaguar, Lotus, Bentley, Porsche, De Tomaso and Maserati to its portfolio.  Kjell Qvale, the founder of British Motor Cars, recently celebrated his 92nd birthday, and continues to suit up for work every day. He is credited with introducing MG, Maserati, and the VW Beetle to America, co-creating the Jensen Healey roadster, and creating the Pebble Beach Concours d’Elegance. 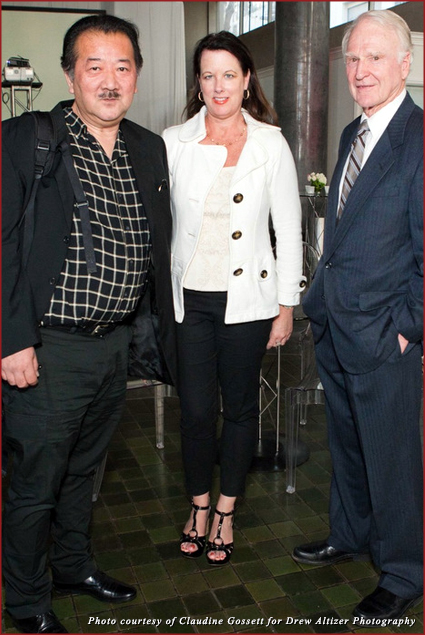 It was exhilarating driving through city streets, hoping to reach maximum speeds. Sure, the Evoque looks fabulous, but it also handles like a dream. The luxurious Oxford leather seats envelop the driver, while the on-board cameras and navigation system make it impossible to lose your way. Voice recognition controls a number of features, including the climate control, navigation, and the sound system.  The 825-watt, 17-speaker audio system makes driving a pleasure and getting caught in traffic a mere inconvenience. 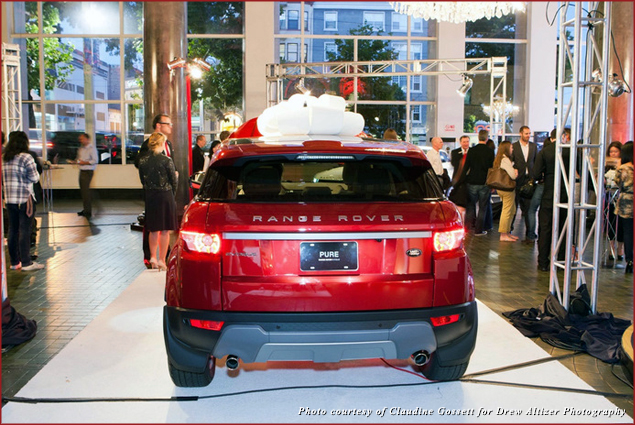 Some of the features I loved in the Evoque included the hill descent control, which automatically adjusts the engine while heading down San Francisco’s steep streets. The new all-terrain technology allows you to conquer the most challenging backroads and clean up for a night on the the town in high style. For those who have trouble parallel parking, with the on-board fisheye cameras the Evoque practically parks itself. The glass panoramic roof is superior to a sunroof as it offers better outside views without limits. The bold, beautiful design is decidedly exotic, yet still exudes the capability of the greatest four-wheel drive brand ever built.

Evoque is a new fuel-efficient Range Rover available in a two-door coupe or five-door model coming this fall at a dealer near you. It is packed with clever and relevant technologies that could make this the best-selling Range Rover in history. 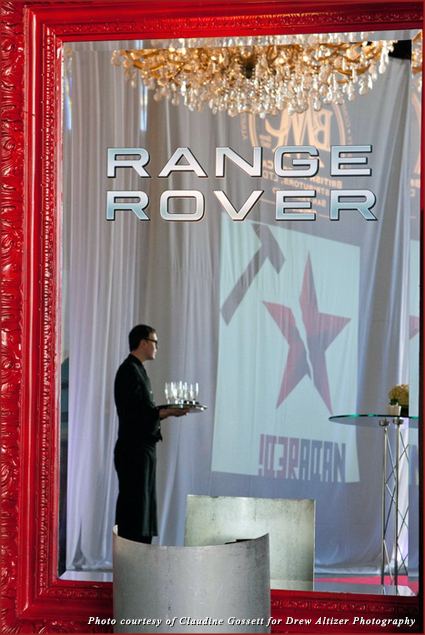 At the launch party, a DJ was spinning tunes while guests noshed on appetizers, sipped champagne and cocktails, and admired the new cars. The party was a classy affair. Valets were lined up to greet guests and dispatch their cars as quickly as possible. Waiters circulated throughout the party with cocktails and appetizers. 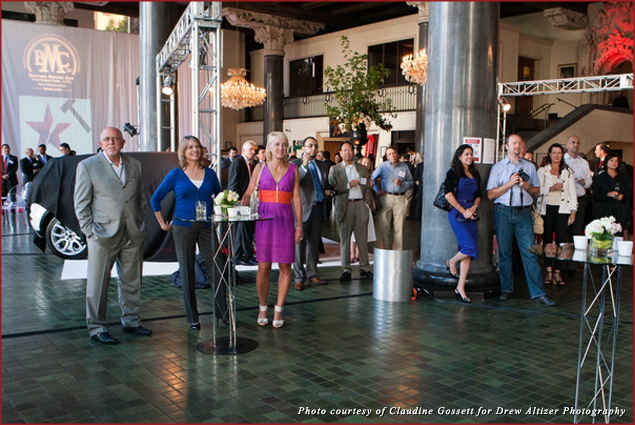 The showroom was cleared out to accommodate more guests and to leave room for the guest of honor, Evoque. On hand for the festivities were Don Endo, Kjell Qvale, and Mark Wolfe from British Motors, as well as Master of Ceremonies Bob Fitzgerald from KNBR Radio, who made references to Range Rover’s appearance in a starring role in the classic television series Mutual of Omaha’s Wild Kingdom. 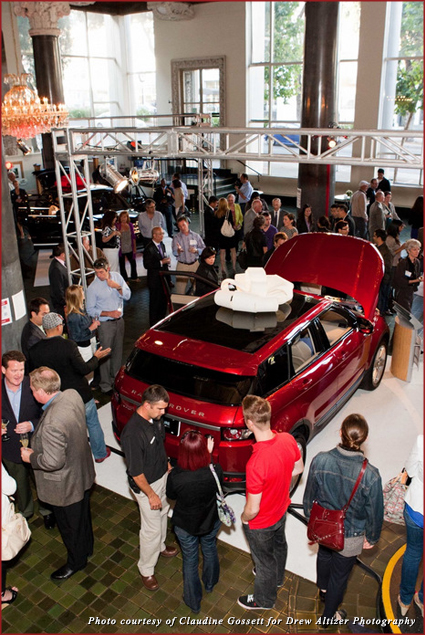 At long last, the cars were unveiled, adorned with giant bows. It was then that attendees were finally allowed to get close to the cars, sit in them and ask questions about the many features. 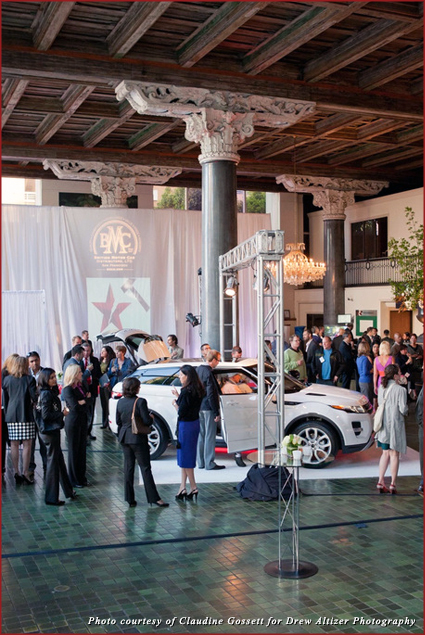 Evoque has a two-liter engine that delivers 236 HP that achieves 60mph in 7.6 seconds while getting 19 mpg in the city and 28 mpg highway. This eco-friendly vehicle uses recycled materials, including 35 pounds of recycled plastic, making it the smallest and lightest weight offering by Range Rover. The design features a lower profile and sleek lines.

You can customize the perfect car to suit your needs with Pure, Dynamic or Prestige options, each with individual seat choices and interior and trim colors, as you would expect from Range Rover.

The Range Rover website has more details about the Evoque and contains videos to give you a feel for how the car looks and handles. If you are in the market for a beautiful SUV, then Evoque might be a perfect choice. 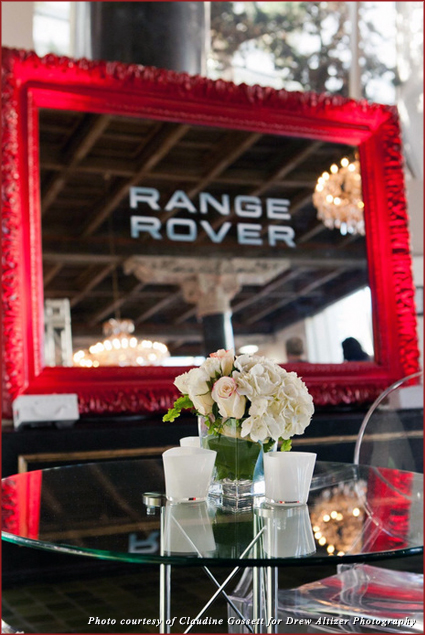