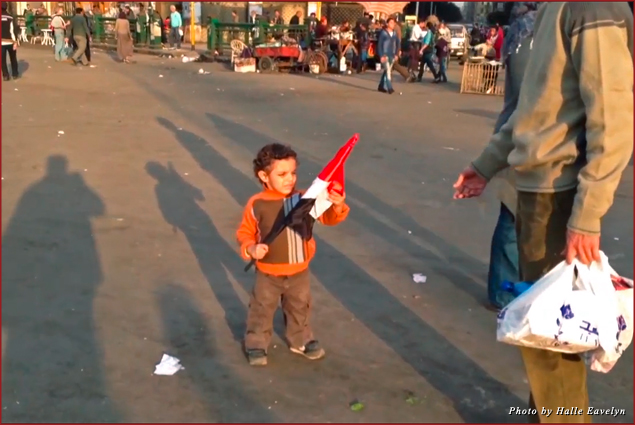 It’s noon on my first day in Cairo, and we are visiting Tahrir Square, heart of the recent revolution and home to most of the current uprising. Egypt‘s new President, Mohamed Morsi, has decreed that whatever laws he makes cannot be overturned in court, and, after repeatedly warning him they would do so, the Egyptian people have taken to the streets once more.

The news outlets in the United States kept up with the clashes daily; as a result, we had six dropouts on our current tour and almost had to cancel the whole thing. It was only after we asked ourselves if we felt comfortable enough to go (yes, but with misgivings) and checked with other groups we knew that had just returned from Egypt, that we decided to go ahead.

On our first morning in Cairo, I awoke and saw the Great Pyramid looming outside the window in the rising sun, and I knew I wanted to visit Tahrir, to see for myself what was going on in the square. The discrepancy between what I had seen on the news and what I saw with my eyes was marked, and remarkable. These were no gangs of street thugs hating on each other; they were the people of Egypt trying to make their voices heard any way they knew how. They realized the eyes of the world watched, even selling T-shirts commemorating the historic events. And yes, there was righteous anger on both sides, but on a day-to-day basis this was just a country trying to be heard.

We crossed fallen barriers, fences that had been erected to keep people out but had been knocked down and were now being stepped over, their intended purpose relegated to a minor inconvenience. Then we walked about thirty yards into Tahrir and stopped.

Dozens of tents lined the middle of the square, surrounded by about two hundred people who stood chatting, discussing politics, or filming one another. Greg whipped out his smartphone and went to town. He shot this two-minute video of me, looking a little jetlagged and a lot incredulous about where I was and what I was seeing. We bought T-shirts, including one which said it all: The Power of the People is Stronger Than the People in Power.

I tugged on Greg’s shirt. We had promised our dear partner Mohamed Nazmy, who came with us and brought his daughter Nancy as our driver, that we would be gone just 10 minutes. We were overstaying our welcome.

As I turned to walk back, Greg nudged me and pointed into the center of the street, right at the edge of the tent village. There was Mohamed, pulling up a chair. I crossed over to him. “Momo, what are you doing?” I asked.

“Having tea,” he said. “Care to join me?” And so it was, just a few minutes later, that we were drinking a glass of hot tea, brewed 10 feet from our chairs by one of the many vendors who had set up shop in the street.

As I sipped and smiled, I realized there was a world of difference between the news—reality TV showing those heightened moments that make good drama—and the reality that I was now living. The people who chose to join us for our upcoming tour were truly in for the time of their lives. Reality is what you make of it, and this was mine.

Want to read more about Halle’s experiences in Egypt? Check out her book Red Goddess Rising.