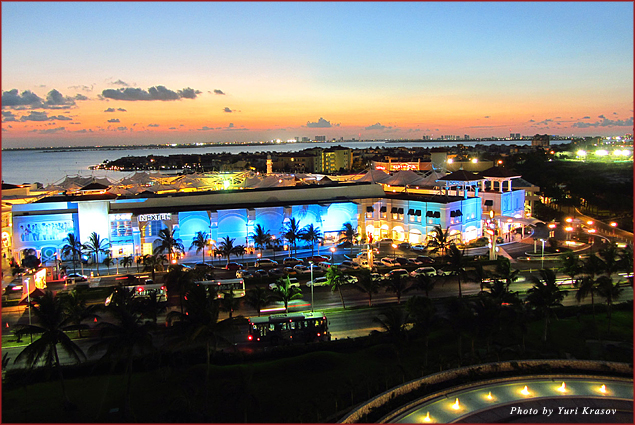 It’s no secret that Cancun, the most popular tourist destination in Mexico, has breathtaking sandy beaches and the clearest water in the Caribbean. It’s also no secret that the recently renovated Hotel Zone can accommodate any request and satisfy any wish of the leisure crowd. 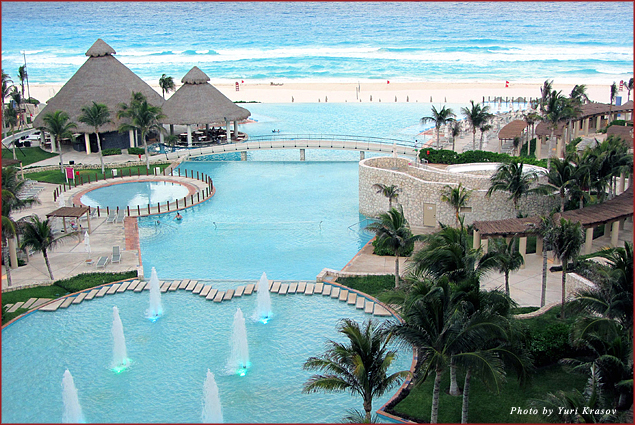 At Westin Lagunamar Ocean Resort, where my husband and I spent our short glorious vacation, the beach was sugary-white and empty, and the sea was shining with all shades of blue and green thanks to coral residue at the bottom that emits no dust and filters the water clean.

Westin Lagunamar opened just a couple of years ago and has it all – spacious guest villas with full kitchens and balconies, gorgeous grounds, two gigantic swimming pools, a poolside bar, a grocery and convenience store, and an upscale restaurant – Oceano – with an abundant breakfast buffet and romantic themed dinners. 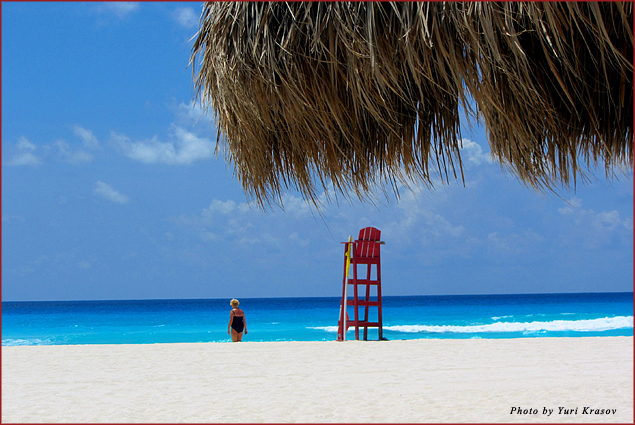 I could have spent all five days at the hotel, just lounging on a beach bed under a grass umbrella and sipping cocktails at the two-for-one happy hour. However, the weather changed, and a light but persistent rain chased us out of water. Sun-tanning was no longer possible, but it was nice to walk around. Luckily, only a step away, a short ride downtown, a bus trip off the hotel strip, there were things to discover about Cancun – just a few of its many wonders. 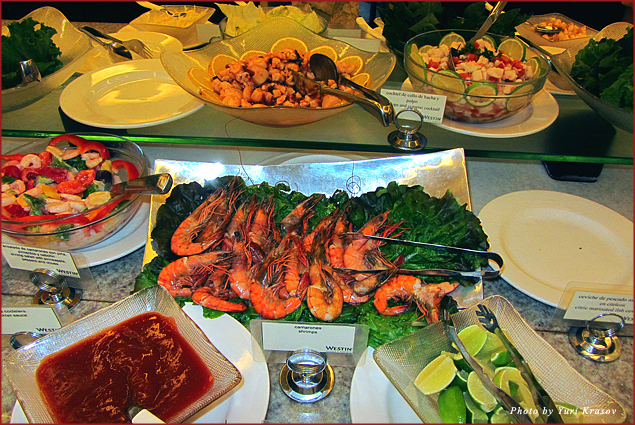 The first of our discoveries was practically on the hotel property. Beyond the main building, we walked up to a historical ruin of a Mayan temple, Yamil-Lu’um. This name means “hilly land” and was given to the temple in the current era, since no one knows for sure exactly how it was dedicated. Some say it is similar to the seaside temples of Mayan civilization, dedicated to the god of dawn Zama, but when the ruin was first discovered in 1842, a scorpion statue found inside gave it its other name, Templo del Alacran (the Temple of the Scorpion). 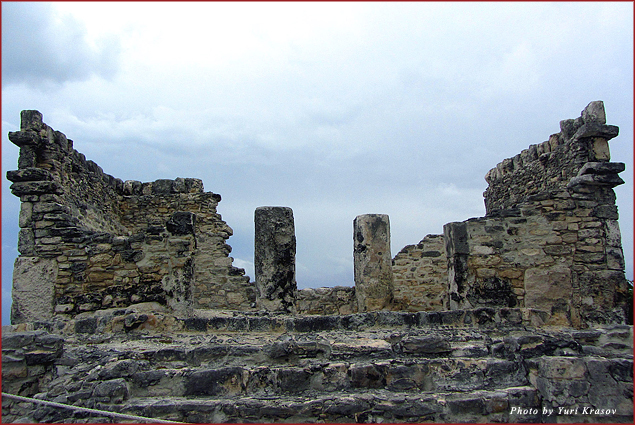 The temple is located on the highest point along the seashore and presents the remnants of an impressive stone structure built between the 12th and 15th centuries. It is now protected by the government and beautifully lit at night.

We made another discovery during a drive to downtown Cancun. Labna is one of the best restaurants in the area serving traditional authentic local cuisine – autentica cocina Yucateca. Pumpkin-seed sauce, called sikil-pak; red onions marinated in lime juice with cilantro and chili; and chaya leaves used along with rum, anise, and lemon juice for a refreshing green drink were all new to me, although I thought I knew Yucatan food. 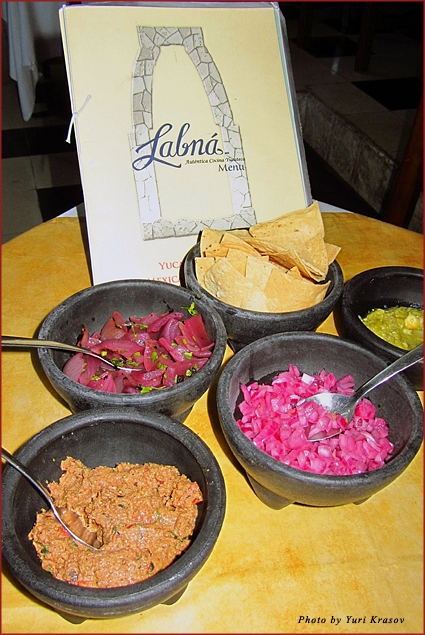 Even the water served with dinner was special, and we tried three kinds of it – hibiscus, tamarind, and horchata (rice juice).

Labna also has great traditional desserts, like Maya blanco (coconut custard) and dried papaya with Mayan honey and cheese. No wonder this place has been discovered before us by countless diners from all over the world.

Our third discovery was in the realm of nature, so delightfully rich and diverse in the blessed Mexican state of Quintana Roo. We took a tour to the Rio Secreto caves in the Riviera Maya. Rio Secreto is a recently discovered underground river with fantastical caves framed by stalactites and stalagmites of amazing beauty.

Dressed in wetsuits, water shoes, and helmets with flashlights, we embarked on an unforgettable journey into the underworld. I was glad I didn’t know what to expect before our tour. 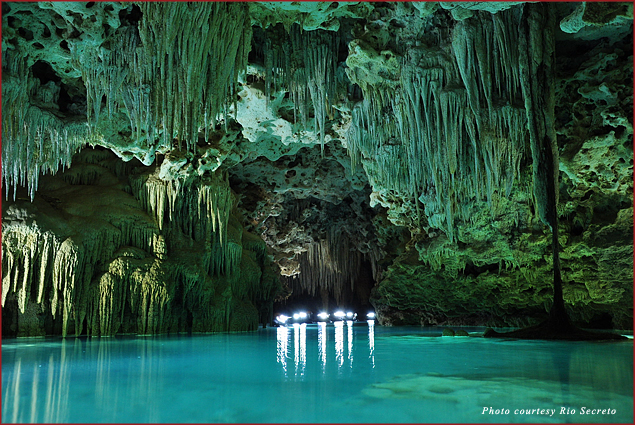 I had always had some apprehension toward those wetsuits that make a normal flabby human being look like Martian Manhunter. I thought I would just suffocate in one of them before entering a body of water. Secondly, I despise helmets for causing helmet hair. I had to submit to both, since our guide explained that his concern was not so much about our heads and bodies as about the fragility of the cave sediments, accumulated over thousands of years and easily destroyed by close encounters with human skin and hair.

While in the cave, it was relatively easy to navigate the narrow trails mostly covered with water. Due to the absence of sunlight, no moss or lichens grow on the rocks, so they are not slippery. In some places, the calm dark water was deep enough for us to take a short swim between the trails.

At some point, our guide encouraged us to sit down along the cave wall, turn off our flashlights and meditate for a minute in complete darkness and silence, enhanced by the absence of drafts underground. He said the time flow was impossible to detect under these circumstances. Not a big fan of meditation, I was glad when we continued our journey among the stunning crystalline rock growths, and soon returned to the sunlit surface of the earth.

The weather went back to being its usual Cancun-great, sunny and breezy, and we spent the rest of our vacation lounging on the beach and jumping up and down in salty stormy waves. 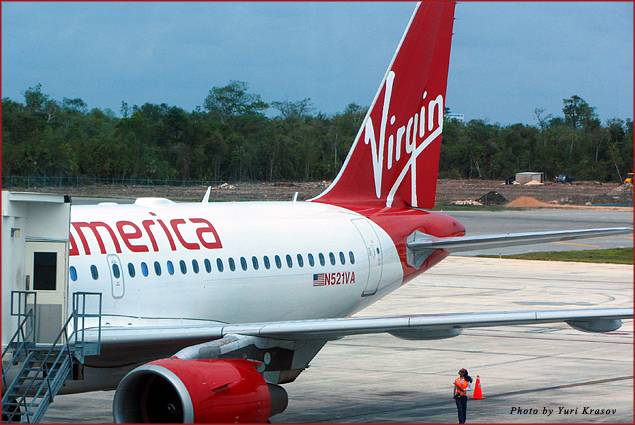 On our way home, we made a couple more discoveries. First, the Cancun International Airport was named Latin America’s best airport for the second year in a row by the Airports Council International for its customer care and quality of services.

Secondly, we felt well-rested and relaxed while flying back, mostly thanks to Virgin America’s new airplanes with wider seats and more leg room, and due to the fact that our flight went non-stop to San Francisco – one of the advantages of this California-based airline that launched in 2007.

When in Mexico, Eat Like the Locals The Gentle Giants of Cancun