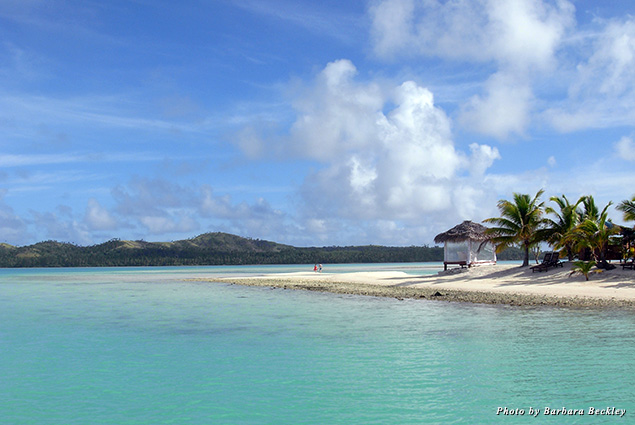 Scenery so magnificent it inspired a mutiny. “Over there…,” Katu Moturakau, the Te Vaka Lagoon Cruise captain, pointed to a cove across the sapphire waters, “is where the HMS Bounty anchored in 1789. A few days after they set sail from here, the crew rebelled in what has become the world’s most famous mutiny—depicted in the 1962 movie, ‘Mutiny on the Bounty,’ starring Marlon Brando.”

I was in awe. Looking across the gleaming expanse of liquid turquoise, ringed by Robinson Caruso-like islets, thick with palm trees and spotless white sands, it’s easy to side with the 18th century sailors.

This was Aitutaki, the second largest of the Cook Islands’ 15 small landmasses, and I was enjoying a half-day sail on Aitutaki Lagoon. It’s little changed since 1789. The few breezy holiday homes and charming Aitutaki Lagoon Resort & Spa are easily overpowered by the lush foliage and expansive waters, leaving the lagoon so unspoiled it’s considered one of the world’s most beautiful. As we snorkeled above brilliant coral reefs teeming with colorful fish and stopped at deserted motus (islets) to slosh through transparent water looking for shells and exotic birds in the overgrown interiors, then returned to the boat for freshly caught grilled fish and icy Cook Islands’ Matutu brand beer, I was convinced this was a South Seas dream come true.

But it was not my first. This was my third trip to the Cooks and each time I discover a different paradise. Undiscovered by mass tourism and largely unknown to United States travelers, the Cook Islands are packed with pristine beaches and lagoons, picturesque towns, ancient culture, and friendly people who know how to make their own fun. The nightlife, largely inspired by expat New Zealanders, would make Jimmy Buffet proud. The shopping is great, too. Black pearls, handcrafted designer clothing, and sophisticated locally made perfumes and spa products are choice finds.

The Cooks cater to all travelers, from Conde Nast-recommended luxury to backpacker casual. Like the island nation itself, the resorts are small scale. At 280 rooms, the Edgewater Resort & Spa on the main island of Rarotonga is the largest. 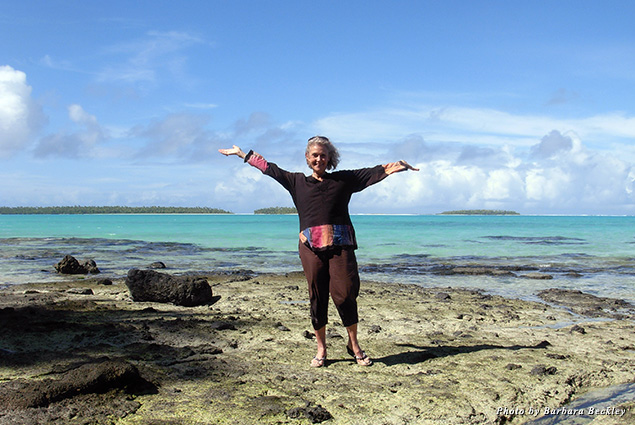 On Aitutaki, I stayed at the family-owned Tamanu Beach Resort, a collection of medium-priced beachfront bungalows and a popular oceanfront restaurant and bar. Crowds gathered from everywhere for its Polynesian “Island Night,” featuring local singers, dancers, and musicians. My bungalow was huge, with a large sunny porch and an even larger living room that opened into a sizable bedroom with a spacious bathroom. For luxury, the Pacific Resort Aitutaki, a member of the Small Luxury Hotels of the World, is a 5-star winner.

When my dreamy Te Vaka Lagoon Cruise ended, most of the passengers returned to “Raro,” as the locals call Rarotonga. It’s a 45-minute flight on Air Rarotonga; perfect timing for a day-trip. But not me. I had a more exotic destination ahead. 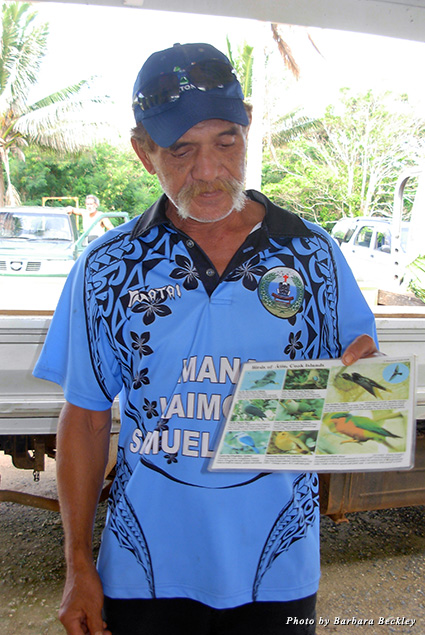 “All the other islands are eroding, but we’re rising. We have a freshwater lake. And we have thousands of rare birds, yet only 475 residents.” “Birdman George” Mateariki was showing me around his native volcanic island of Atiu, the Cooks third largest and perhaps most mysterious island. It’s home to birds so rare they live only here and to Polynesia’s only remaining wild coastal forest, George explained as we rumbled along the only road in his jeep.

A bird lover since youth, George has made it his career to study and preserve the islands’ precious avians. He’s world-renowned; ornithology students at the University of Oxford travel to Atiu to learn from him during their post-graduate studies. Being an avid birder, I was thrilled as we spotted bright red lorikeets, green fruit doves, and the dusky Pacific wood pigeon among the ancient trees.

“Look! There’s the first whale of the season,” George exclaimed. We’d stopped along the wild, treeless northern beaches on the way back to my lodging at Atiu Villas. It was May, and a humpback whale was breaching in the sunlit waves. Whale season runs through October. 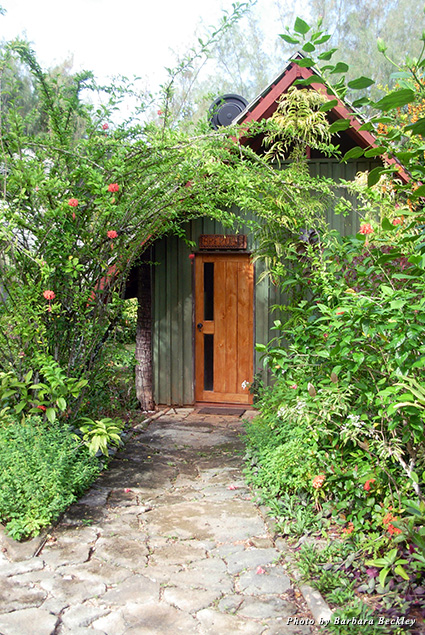 Like little chalets, the A-frame cabins at Atiu Villas are the island’s best accommodations. The villas are charming and cozy, with garden verandas, full kitchens, and even a friendly cat, who begged—and of course received—fresh milk from my fridge. Homestays are available at several residences as well.

While there’s no nightlife per se, the Tumunu bush beer parties make for an insightful peak into Atiu culture—if you’re invited. The men, and now women, gather on certain nights to drink home brew out of coconut shells. Different Tumunu groups drink at different spots around the island. Most visitors can be invited.

After driving down a dark dirt road to a shack in the jungle, I found myself the only woman in a room filled with burly islanders, save for my host, Roger Malcolm, managing director of Atiu Villas, who had arranged this Tumunu. I couldn’t help but recall that historically Atiu was home to the fiercest warriors in the South Pacific, and these guys were direct descendants. But everyone was polite and observed a protocol, asking me questions and my asking them questions. I’ve been to the South Pacific enough that I had mutual friends with several of them. All the while, half-coconut shells were being dipped into a barrelful of home-brew and passed around. Roger had to leave early—it was “Island Night” at Atiu Villas—so we bid the boys farewell and left them to drink into the night.

The villas’ indoor-outdoor restaurant/bar was packed by the time we returned. We even picked up a young German couple that was walking over from down the road—Atiu is that safe and small. I met visitors from the UK, the US, New Zealand, and Australia. Obviously, this is the biggest party on the island, a weekly night of mai tais, an umukai (the Cook Islanders’ version of luau foods) buffet, and a folksy Polynesian dance show. 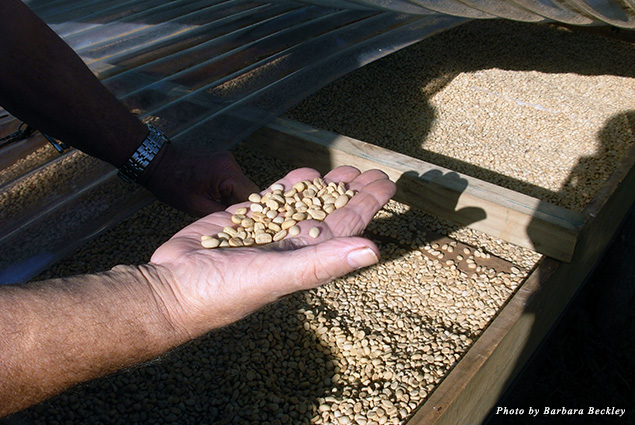 Coffee is a gourmet industry on Atiu. I got the cooks tour, so to speak, of the Atiu Coffee Factory plantation by owner Juergen Manske-Eimke, who mail orders his organically grown 100-percent-sundried Arabica beans and ground coffee around the world. Tea and sandwiches were served at the Atiu Fibre Arts Studio, which showcases the works of Andrea Eimke (Juergen’s wife) including twaivai, the Cook Islands’ traditional ceremonial cloths, and then I was off, taking the 45-minute flight to Rarotonga.

After Atiu, Raro seemed like the big city—although you can drive around the entire island in an hour. I hit the island running and soon was cycling along the back roads with a Cook Island elder on the Storytellers Eco Cycle Tours. Velvety green peaks rose above as we peddled past taro patches, local and expat homes, and untamed jungle. I learned about the local flora and even got to taste fresh noni—touted by some as a miracle fruit to stave off aging—plucked from the tree. “Yuck,” it tasted like gelatinous limburger cheese. “…Maybe it would be better with a crisp white wine,” I teased. 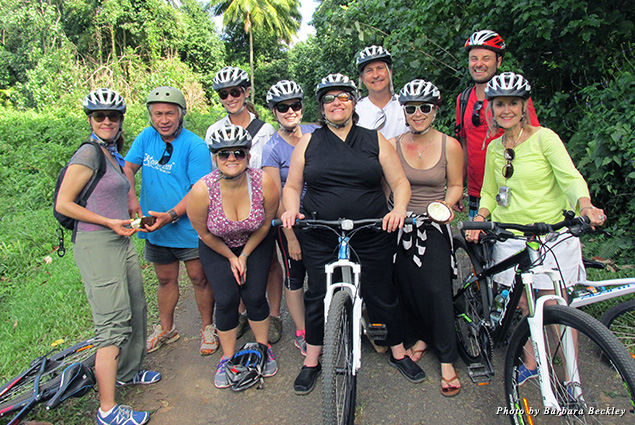 A bit later, I could have tested my noni-pairing theory at the combination home and Koteka Winery of third-generation Cook Island winemaker Framhein Koteka. There were no pairings, however, just the surprisingly delicious taste of homemade organic fruit wines and spirits. His sunny house was crowded with neatly labeled bottles, waiting to be snapped up by locals and visitors. Framhein uses bananas as the basis for his white wines, he explained. The small still in the corner is where he makes fruit-infused spirits, such as the tasty passion fruit vodka and his favorite, chili vodka. Framhein dries the fruit on the roof before turning it into liquid gold. 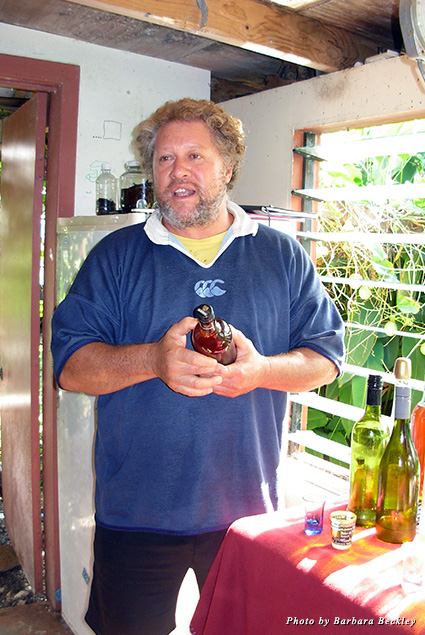 Raro has wonderful restaurants, including upscale choices such as the Flame Tree and the Nautilus and beachy spots such as the Mooring Café, where the locals go for “the best” fish sandwiches. But that night, I forsook these menus in favor of dinner with the locals on the Progressive Dining Tour, with Cook Islands Holidays, which features appetizers, a main course, and dessert served in three private homes. Sitting on the veranda of a local chief’s home, I and about 20 New Zealand visitors toured his lands and learned about the culture from the inside out before sitting down to appetizers served by his grown children. We then enjoyed sweeping ocean views we wouldn’t see except over dinner at a beautiful modern home on a hill. 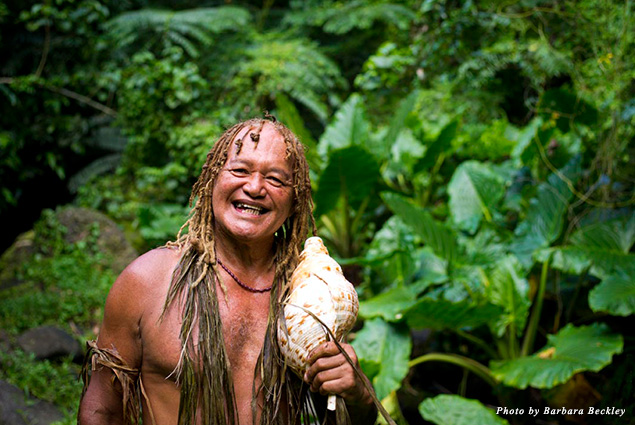 Morning found me dipping a paddle into the transparent waters of Muri Beach Lagoon. The white sandy bottom was a perfect backdrop to the yellow-and-black sergeant majors and other colorful fish darting beneath my red plastic kayak. Next, I hiked up into the jungle-clad peaks I’d seen from my bike the day before. I was on the Cross Island Tour with Pa’s Treks, a must-do for every visitor. Stepping over tangled tree roots and ducking under giant ferns, Pa, Raro’s legendary native son and herbalist-tuned-eco tour guide, led us into the dense interior, where we experienced historic marae (sacred gathering spots) and learned the ancients’ healing arts. Sitting on a rock at the base of the Needle, the natural granite spire that defines Rarotonga’s landscape, Pa related how long-ago Rarotongans set sail from the beach far below to colonize the Tahitian islands. 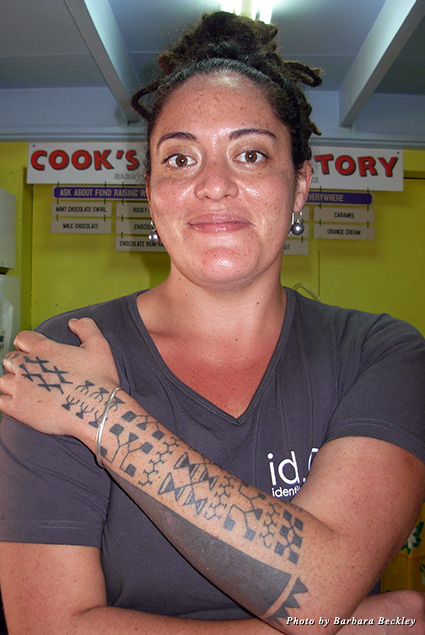 From the remote interior to Avarua—the one and only town—takes only a few minutes. The lovingly made chocolates at Cook’s Fudge Factory were just the things to restore my energy. “Can I buy these at the airport duty free shop when I fly home?” I asked the cute 20-something, multi-tattooed sales girl. “Oh no. If we sold them outside the shop that would defeat our purpose of being truly fresh, home-made confections.” Her explanation made sense, after I devoured a half-pound of the melt-in-your-mouth mint chocolate fudge. The fudge shop shares boutique space with Perfumes of Rarotonga, equally lovely island-made perfumes and colognes in all the Polynesian floral fragrances, freshly made coconut soap, and vanilla and mango oils packaged in whimsical tiki-shaped bottles.

Just down the road, designer dresses are a must for the fashionista at the TAV flagship boutique, home to Cook Island designer Ellena Tavioni’s original designs and fabrics. Not cheap—my dress was US $220—but it was great to shop her entire collection, rather than just a few pieces at boutiques in Hawaii, Tahiti, Australia, and elsewhere in the Pacific. Not to forget black pearls—Bergman & Sons has the best.

Night was falling—Friday night to be exact. In Raro, that means drinks, nibbles, and dancing to live music at Trader Jack’s. True, there are lots of night spots, but Trader Jack’s, located on the water in the heart of town, is an old-school see-and-be-seen locals’ haunt that shouldn’t be missed. I had only a few drinks, however, because Saturday morning brings another must-do activity. That’s when it seems everyone on the island converges on Punanga Nui market square to shop, chat, eat, and enjoy live bands and singers. Most of the island’s merchants set up booths, so it’s an efficient and sometimes cheap way to buy just about everything, from souvenir carvings and tropical-patterned shirts to pareos (wrap-around pieces of brightly patterned clothe) and bed spreads. I bought a good-sized black pearl pendant in sterling for $25. But get there early. It’s all over by noon.

Getting There: Air New Zealand has direct flights out of LAX once a week on Sundays.