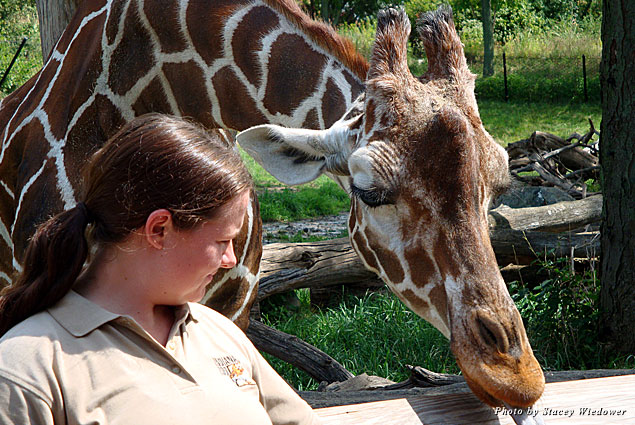 We’ve managed to see Florence’s Uffizi Gallery in a couple of hours, view the highlights of the Louvre in less than three, and enjoy New York City’s Museum of Modern Art in two hours. So seeing The Children’s Museum of Indianapolis in a couple of hours shouldn’t have been a problem. It was the plan, at least, on the second day of a recent four-day visit to Indianapolis.

But as we were on our third hour in the museum and our son was still going strong, my wife and I looked at each other with the same thought crossing our minds: We’re not going anywhere anytime soon.

We visited Indianapolis to explore the city’s many offerings for families while also getting a taste of the city’s shopping, food, and beer scenes. After four days, we left impressed on all fronts. When we decided to take our 6-year-old son along, we knew the trip wouldn’t follow our typical travel routine of vintage shopping, brewery visits, and lots of time spent gazing at art in museums and galleries. Much of that did happen, but Indianapolis is a great city for kids, and we were there to discover all it has to offer for families.

The biggest kid-friendly attraction, literally, is the Children’s Museum of Indianapolis, a 472,900-square-foot facility just north of Downtown Indy that draws some 1.2 million visitors annually. But there are other family-friendly sites, such as the Indianapolis Zoo and White River State Park, Rhythm Discovery Center, and The Virginia B. Fairbanks Art & Nature Park: 100 Acres at the Indianapolis Museum of Art that will keep kids entertained for hours while giving parents plenty of enjoyment as well.

We planned every day of our visit around activities our son would enjoy, while still giving mom and dad a chance to enjoy the great food and beer scene, the city’s underrated art museums, and boutique and vintage shopping.

The Children’s Museum of Indianapolis

The highlight of the weekend’s family-centered fun was a Saturday visit to the Children’s Museum of Indianapolis, the world’s largest and possibly greatest children’s museum. Before traveling to Indy I had heard how fun the museum was. I knew it was big, and I knew it had a really cool dinosaur exhibit. But that knowledge couldn’t have prepared us for how large it actually is and how much fun our son would have. This museum is focused on education and discovery for children of all ages, and it gets it right.

Our visit coincided with the opening day of Playscape, a new, permanent exhibit that’s geared toward children up to age 5. This area provides great learning opportunities for young children while letting them have loads of fun at the same time. The $3.2 million renovation of the first Playscape, which had been in use since 1981, was created based on children’s brain development.

We don’t make a habit of visiting children’s museums when we travel, but anyone visiting Indianapolis with children of any age should make a point of visiting this one. I was especially impressed by an exhibit called The Power of Children, which is geared toward older kids who can learn about making a difference in the world by better understanding the lives of Anne Frank, Ruby Bridges, and Ryan White. 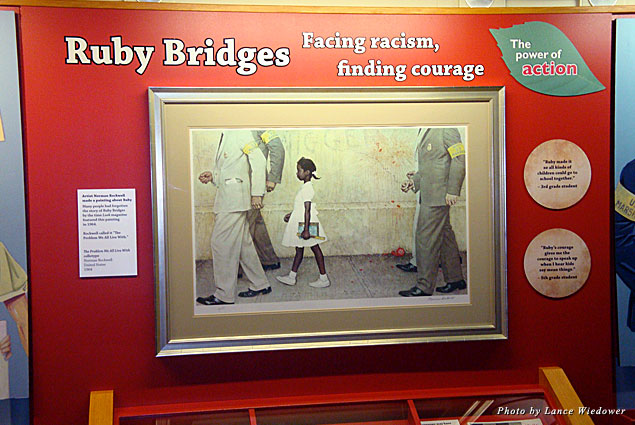 ScienceWorks, Health House, National Geographic Treasures of the Earth, and the Dinosphere all provide educational opportunities in a way even parents will find enjoyable. Our son spent the most time at ScienceWorks, where he was able to play in a construction zone and learn how a lock and dam system on a river works.

And those dinosaurs I mentioned? This place is legit when it comes to learning about the creatures that roamed the earth during the Cretaceous period. There are fossils, a lab manned by paleontologists, and a dig zone that lets kids get a feel for what it’s like to dig for dinosaur bones. 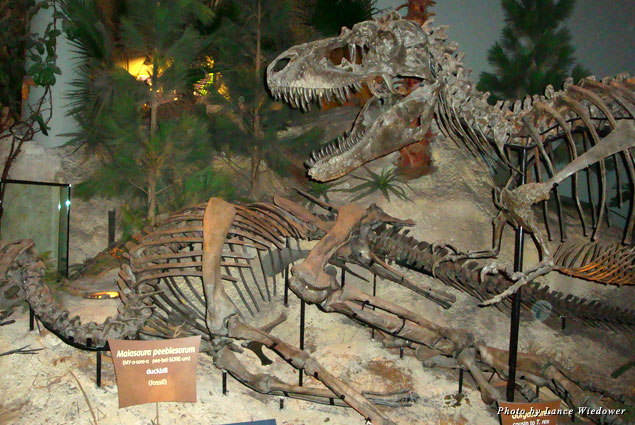 White River State Park and Indianapolis Canal, on the west side of Downtown, feature enough activities to make up a weekend visit to the city. We tried to see it all in a day, and we failed. But what we did accomplish was a minor league baseball game at Victory Field, home of the triple-A Indianapolis Indians; a visit to the Eiteljorg Museum’s impressive collection of Native American and American West art; a surrey ride along the canal; and a visit to the Indianapolis Zoo. 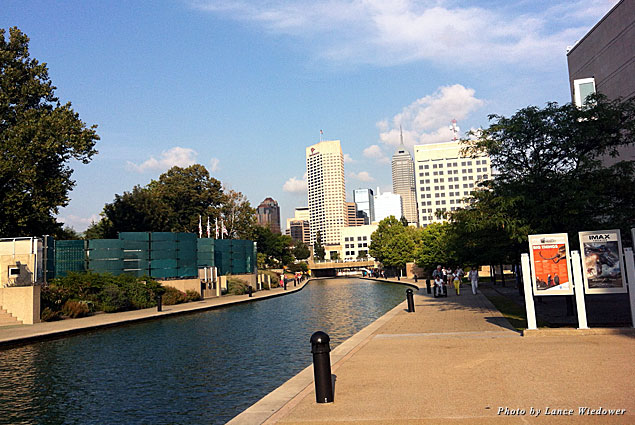 We began the day with the zoo, with its impressive Oceans exhibit and dolphin show—not to mention the opportunity to pet a shark, which was a highlight of the day. I expect strong ocean exhibits like this at aquariums, not zoos in the Midwest. 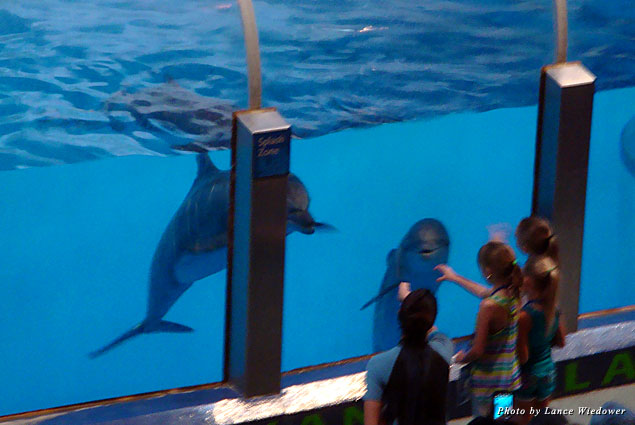 After leaving the zoo we crossed the park to visit the Eiteljorg Museum of American Indian and Western art. There we enjoyed watching our son sit in front of beautiful paintings of the American Southwest with a sketchbook drawing his interpretations of the art. It’s hard to say if the museum is underrated considering I knew nothing about it before walking in the door. But we considered it a real find, and we’re glad we had a chance to peruse its galleries. 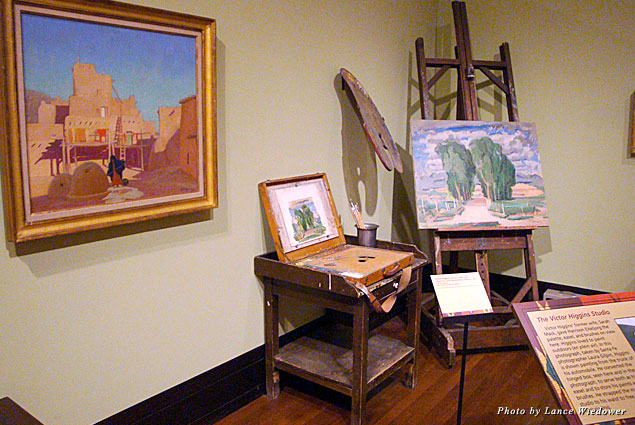 One spot I wish we’d had more time for was the art and nature park at the Indianapolis Museum of Art. While my wife enjoyed the art inside, my son and I explored parts of the park and its unique art installations. His favorite? “Free Basket,” a sculpture with soaring red and blue steel arcs that depict the trajectory of the basketball. And in basketball-crazed Indiana, it was only fitting he ended the day with a game of one-on-one with a new friend. 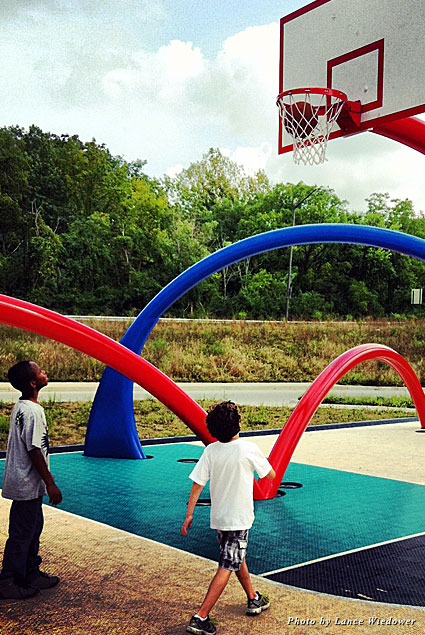