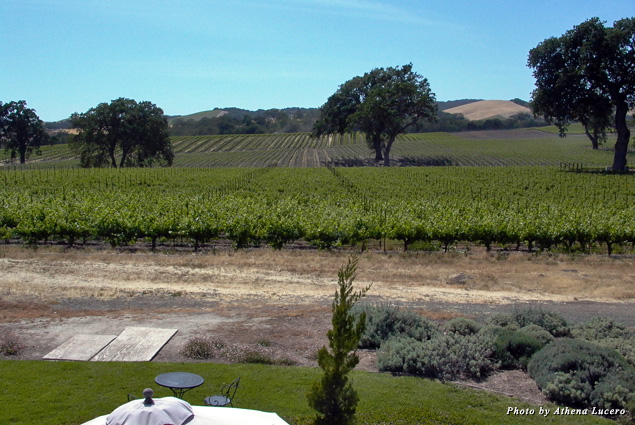 Taking the train from Los Angeles’ Union Station to Paso Robles was the start of a glorious getaway to wine country in California’s Central Coast, located midway between the City of Angels and San Francisco. I had decided to nix a four-hour road trip by car and instead purchased a ticket to ride Amtrak’s Coast Starlight, “the most spectacular of all train routes.” The commute became a journey as I plunged into my cushy reserved seat and sipped a steamy cup of coffee all the while charging my Blackberry, watching gentle Pacific waves wash ashore, and drooling over gorgeous beachfront properties.

And when the panorama changed to vineyards and oak chaparral—the classic scenes of California landscape paintings—we had arrived on the Central Coast.

Over the last few decades, Paso Robles has evolved from a sleepy agricultural community into an international destination for wine lovers. Spread over 615,000 acres with more than 200 wineries, the Paso Robles appellation is among the largest in California. That is a lot of wine tasting.

With each visit to “Paso,” as the locals call it, I get to know the warm and friendly community more. Here, people from all walks blend together—farmers, winemakers, chefs, engineers, former executives, entertainers, natives of Paso or distant lands, and others—a real-life cornucopia of sorts.

The region’s unique terroir between the coastline and the Santa Lucia Mountains creates ideal microclimates for growing a variety of grapes—mineral-rich soils, warm days, and nights cooled by ocean breezes. Paso Robles earned the designation of American Viticultural Area (AVA) in 1983, and ever since its award-winning wines crafted by innovative winemakers who like to think out of the box have become internationally recognized. In 2013, Wine Enthusiast Magazine awarded Paso Robles Wine Region of the Year. 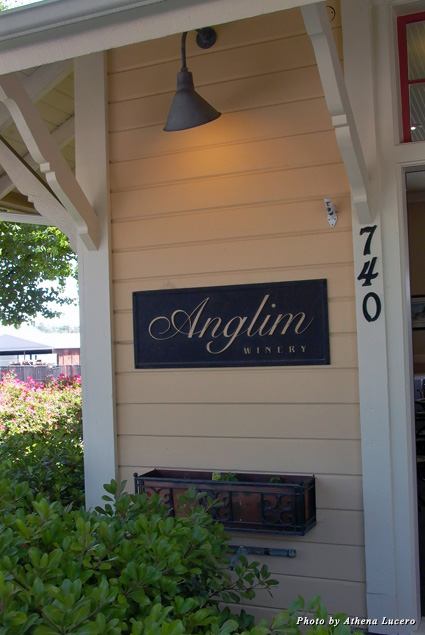 I joined a group of like-minded travelers and together in the comfort of a small air-conditioned coach we left the driving to Breakaway Tours, Paso Robles wine country specialists, as we visited Anglim Winery, SummerWood Winery, Calcareous Winery, Vina Robles, and Bristols Cider House. The wineries are all different and family-owned. It’s a privilege to get up close with the winegrowers and winemakers who are delighted to share their labor of love.

Anglim’s tasting room, located at the historic train depot on Pine Street, brings together wine tasting and nostalgia inside a refurbished train station originally constructed in 1886, when it served as a major stop between California’s then main commercial cities—Sacramento, San Francisco, and Los Angeles.

Husband-and-wife team Steve and Steffanie Anglim worked in tandem as they welcomed us (he’s the winemaker; she handles sales and marketing).

“We have an all-French oak program for our whites,” said Steffanie, as she poured a 2012 100% Viognier, a major white varietal from the Rhone Valley of France, and primarily what Anglim produces.

Steve makes Viognier three to four different ways. “The grapes grow so wildly different,” said Steve, “…and you won’t believe they come from the same vineyard, on the same day!” He also ages the wines longer, almost two years, which gives the wines exceptional floral characters.

Set on 32 acres of vineyards, SummerWood Winery and Inn on Arbor Road is an oasis for wine lovers and romantics. Owned by the Fukae family of Osaka, Japan, the name SummerWood was inspired by Mr. Fukae’s son, Natsuki, whose name in Japanese means “summer wood.” 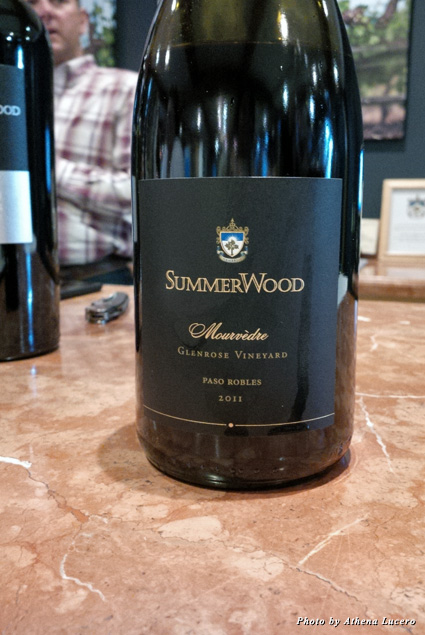 Across the road at the tasting room (Rhone-style and Bordeaux-style wines are highlighted here), we met SummerWood’s winemaker Mauricio Marchant (he’s from Chile) as general manager Shayne Kline poured flagship vintages: the 2011 Sentio (means “senses” in Latin); an intense blend of Cabernet, Merlot, and Malbec; and the 2011 Diosa, a luscious blend of Syrah, Mourvedre, and Grenache.

Just as each winery I visited on this trip offered distinct differences in its wines—because of each area’s particular soils, geography, elevations, and microclimates—Paso Robles wine country has recently evolved to further refine the huge appellation into 11 smaller AVAs.

“It gives us the chance to tell the story of our sub-AVA in the Templeton Gap,” said Kline, “The corridor is a straight shot to the coast versus the east where there are plateaus and it’s a lot hotter.”

Indeed, we worked our way to Calcareous Winery perched on a high limestone plateau.

Lloyd Messer and his daughter Dana Brown chose to plant grapes on the hilltop because the climate and rare chalky soils white with lime deposits (the sea once covered these hills) provided perfect conditions for making outstanding (and award-winning) wines made from Rhone varietals and Zinfandel, the focus of Calcareous, which means “limestone” in Latin. 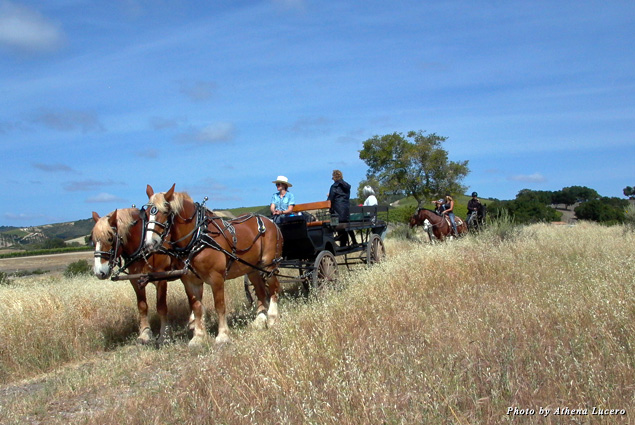 We were eager for wine tasting but not before hitting the trails, literally—four on horseback and the rest of us on a wine-tasting wagon ride pulled by a pair of hardy Clydesdale horses. Thanks to Mick Harper, owner and guide at Outback Trail Rides (he raised horses with his family in Australia), who partnered with Calcareous in 2013 and offers adventurous and scenic treks through oak groves, open meadows, and vineyards.

At Vina Robles Winery, long-time friends and business partners Hans Nef and Hans Michel, both of Swiss heritage, combined their dedication to agriculture and passion for fine wines to realize Nef’s dream to have his own winery—a brilliant winemaking marriage of Old World traditions and New World edge (Michel is the managing partner). One estate vineyard planted in 1997 has grown to five (Cabernet Sauvignon, Petite Verdot, Syrah, Petite Sirah, and Sauvignon Blanc).  And a natural bowl-shaped area once used for casual summer concerts for friends is now the 3,300-seat Vina Robles Amphitheater that opened in 2013 offering world-class concert programs. 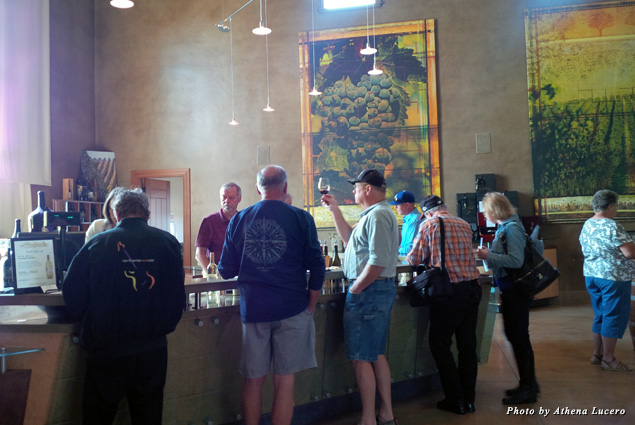 In the elegant high-ceilinged tasting room designed with an architectural nod to the California Missions, we pondered luscious flights of reds, whites, and exciting blends.

Before opening Bristols Cider House tasting room in Atascadero just outside of Paso Robles, siblings Neil Collins and Jackie Meisinger searched high and low for the hard cider they loved drinking back home in Bristol, England. Nothing matched up. So Collins, winemaker at Lone Madrone Winery (his own label), decided to make it himself. What started as a personal project became a hit on the Central Coast. 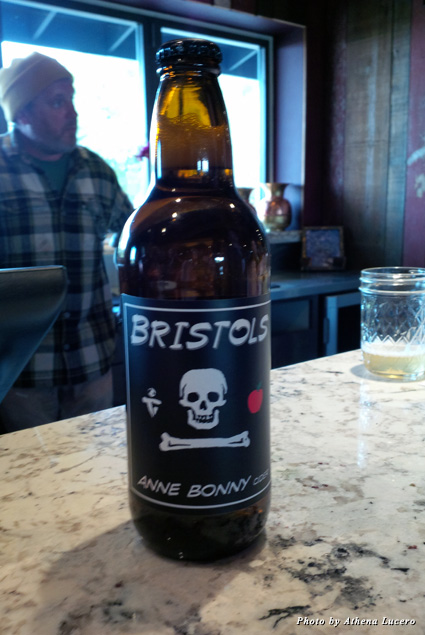 An alternative to wine, Bristols Cider is low in alcohol, gluten-free, and not sweet like the cider most of us know. Besides the original cider, Collins makes seven other flavored ciders, some named after famous pirates including Anne Bonny and Black Beard.

Just as Bristols Cider is served at many local restaurants so are the local wines we tasted, which I was pleased to see at some of our dining stops—Thomas Hills Organics, Bistro Laurent, and Indulge, the gourmet restaurant at The Oaks, my lodging and the newest four-star hotel in Paso. 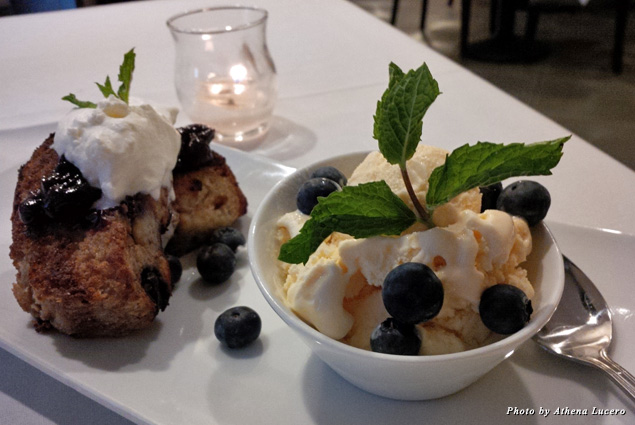 We detoured off the wine trail and discovered that Paso Robles’ once “sleepy agricultural community” reputation is no longer. 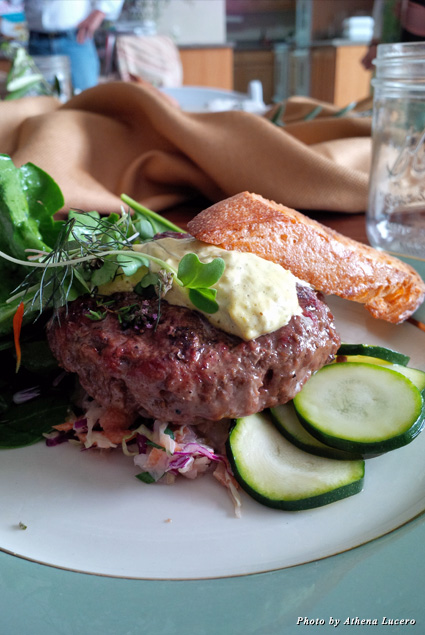 Lots of farms and ranches in San Luis Obispo County supply much of the produce, meats, olive oil, cheese, and other wonderful food products consumed here. With the launch of FARMstead Ed in January 2014, founder Lynette Sonne invites people to come from the table to the farm. Through tours and lively (not academic!) pop-up classes and hands-on workshops, participants of all ages learn cool farm-steading skills and practices. 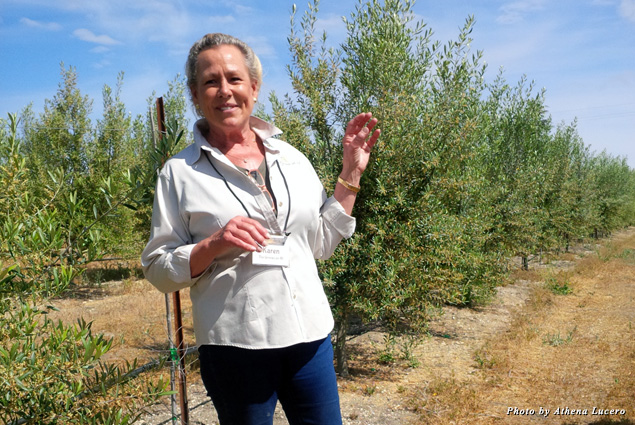 Our crash course was at The Groves on 41 olive farm in Templeton (an unincorporated section of San Luis Obispo), where president and olive farmer Karen Tallent led us through rows of olive trees just about ready to bud (3,500 Arbequina and 500 Koroneiki olive trees were planted in 2011) that will be used for making olive oil, one of the fastest-growing industries in California. The Golden State produces 99 percent of the olive oil made in the United States (the COOC seal from the California Olive Oil Council certifies the authenticity of extra virgin olive oil).

Another local business that can take a bow for sustainable practices is RE:FIND Distillery, Paso Robles’ first craft distillery, where I sipped an artisanal version of a gin and tonic. Winemaker Alex Villicana and his wife Monica of Villicana Winery blazed the trail when they found a way to collect the high-quality “bleed”—or discarded juice—from premium red wine grapes and repurpose the saignée to make luxury spirits vodka and gin. The proof is in the bottle.

We couldn’t finish the class without getting our hands dirty planting our own cocktail garden under the tutelage of Barbara Spencer (of Windrose Farm fame along with her husband Bill). I chose for my garden chives, garlic, basil, and thyme. After clumsily potting the herbs with soil and Vermicompost (compost with worms), I could not have been more proud to carry the cumbersome eight-inch pot on the train ride all the way back home to Los Angeles.