Cruising the Oxford Canal on a Narrowboat 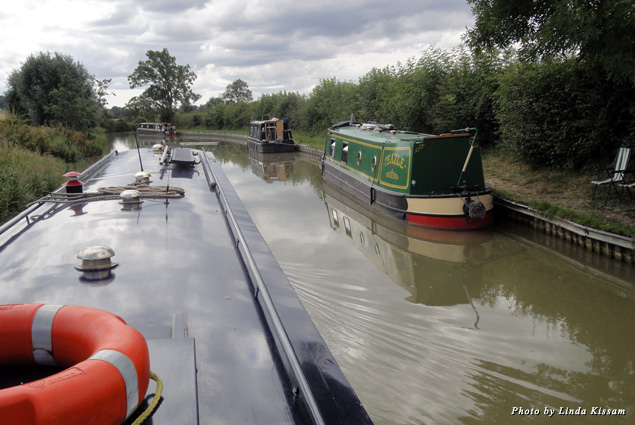 I think most of you will agree there’s something magical about spending time on the water—the peaceful atmosphere, beautiful surroundings, wildlife sightings, sparkling cool water, and admiration of passing boats. What place could there be to enjoy such a thing? How about the canals in England?

If you’ve grown tired of the same old cursing options, such as an all-inclusive, seven-day experience or renting a powerboat to cruise the islands, you might want to have a shift-think. A canal boat holiday—also known as a narrowboat vacation—is an experience crafted by your own hands. With more than 2,000 miles of magnificent navigable waterways to choose from (and each one different), there is a route to suit your personality. 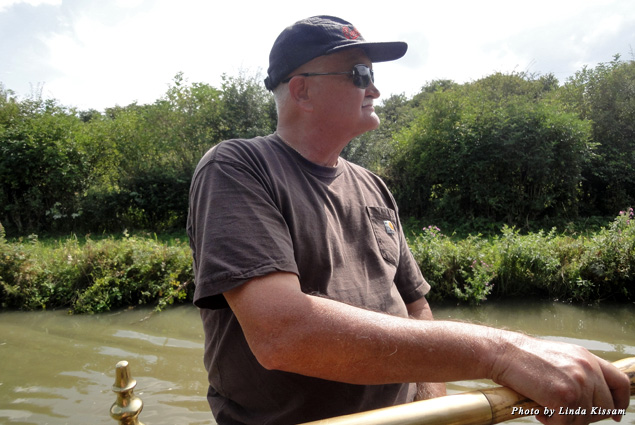 A narrowboat has a distinctive design, made to fit the narrow canals of the United Kingdom. In the context of British Inland Waterways, “narrowboat or narrow boat” refers to the original working boats built in the 18th, 19th, and 20th centuries for carrying goods on the narrow canals (where locks and bridge openings have a minimum width of seven feet). The term extends to modern “narrowboats” used for recreation and more often nowadays as homes, where the design is an interpretation of the old boats for modern purposes and with modern materials. (Think camper on a barge.)

The boats start at about 45 feet in length. They have a small motor and are driven with a tiller from the back of the boat. They are suitable for navigation and relaxation by a single person, couples, families, or groups. No prior driving experience is necessary. With some minor instructions and safety rules, renters are sent out to explore the canals for a day or a week or more. If you have “attitude, guts, and a sense of adventure,” this is the holiday for you.

Managed by the charity the Canal & River Trust, the inland waterways are in the best shape they’ve been for many years. The canals and rivers run through many miles of beautiful unspoiled rural countryside, villages, farmland, and some commerce. The fact you take your hotel with you as you travel and you can stop more or less where you wish means you can tailor your holiday adventure to suit your tastes. The countryside looks so different from the unique viewpoint of being on the water, there is a potential adventure round each watery bend. There are towpaths (walking paths) to stroll or bike on once you moor your boat for the night and a wide range of canal side attractions, including pubs, stores, and museums, to explore.

As a newly baptized lover of canal cruising I will tell you it is the perfect way to de-stress—most of the time. The slowness of the journey (the speed limit is four miles per hour) means the frenetic pace of modern life recedes. Who, after all, has heard of canal rage?

Getting the narrowboat out of its docking position can be a bit of a challenge. Navigating 48 feet of barge to make a hard right hand turn out of the marina takes some good hand-eye coordination as well as a dollop of self confidence. For me, the rental company’s, “Don’t worry so much, ya’ can’t hurt the bloody things. Just have fun,” helped put me in the right frame of mind. OK, we’re talking bumper cars without breaks on a narrow water path. Everyone—including the boat—comes back alive. No big expectations of perfect driving. 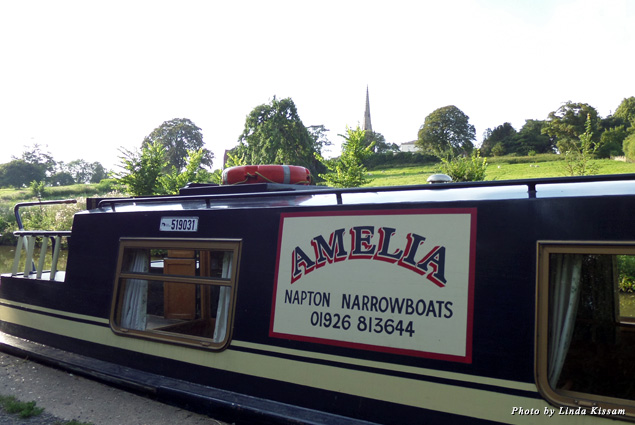 We (my mariner husband actually) made the turn and away we went. Five minutes into the trip I found out our Internet receiver wasn’t working properly. I panicked and began involving my husband in the drama. He handed over the tiller controls to me and went below so he could take a look.

One minute into my command I saw another barge coming the other way. Holy cow! I was on a bend with a moored boat (was that flower pots on the top of it?) to the right—the side on which I was meant to pass. Four miles an hour began to seem like 400, walking speed now careened to gallop to destruction. I prepared to play bumper cars! Full astern…or was it full bow? My poor husband scrambled up from below as I slammed the engine into reverse, the propeller churning mud as I pulled over into the overgrown bank.

It occurred to me at this moment I had absolutely no idea how to steer. Do you point the tiller toward the way you want to go…or the opposite? By the way, when is it appropriate to use reverse? Clear thinking is far more of a problem when adrenalin kicks in. The college boys crewing the oncoming barge were enjoying themselves immensely watching the middle-aged lady panicking; their ridiculous smiles only added to the cylinders of sweat rolling down my neck.

It’s moments like this that make the woman I am. I had a choice: Should I jump into the five feet of water next to me, paddle to the shore, and have a beer while swearing never again to play at being captain? Do I hand the controls over to my sea-savvy husband, or do I step on the gas and hope for the best? I chose yelling smartly, “Good luck, captain!” Who says leadership classes are worthless? 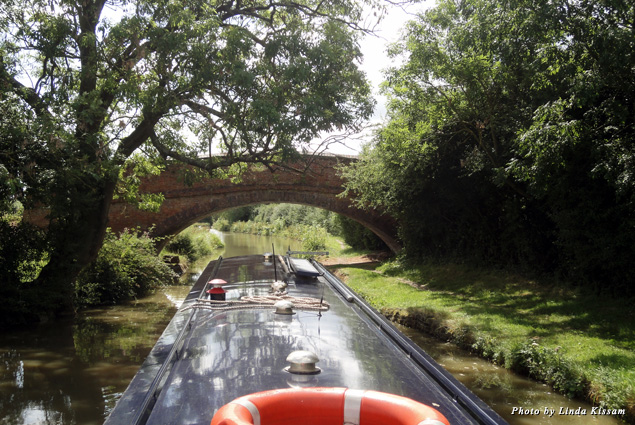 Our journey took us from the Napton Narrowboats Marina (near Stratford upon Avon) northeast up the Oxford Canal to Rugby, a distance of 13 miles, and then back. Four days sounds like a lot of time to go 23 miles, but canal miles are not freeway miles. Canals soak up time, what with the gorgeous scenery, the locks, the tiny overhead bridges you have to navigate through, and enticing pubs. Locks in particular are a time suck but interesting in a mechanical engineering kind of way. Even in small doses they are a royal pain in the neck. We did six over four days. That was enough fun for me. 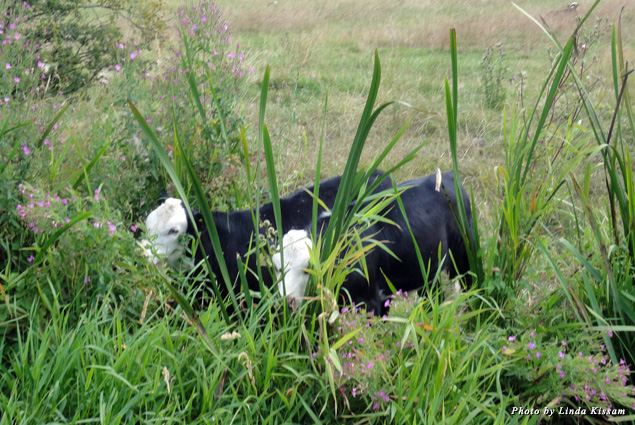 Once you avert your first early disaster, time seems to take on a life of its own. We chugged through blissful countryside. Slowly, barge life took on a rhythm: run times of four hours, glasses of wine, cheese and crackers, a night at a local pub, breakfast from a floating narrowboat restaurant. There were serene straight stretches—and then there was barely controlled panic on the busier, bendy ones. And yes, we bumped a “thing” or two, mostly under my command. I apparently was still not ready for prime time.

The outside world seemed distant, even with checking my email nightly. Home issues seemed somewhat inconsequential. It took time to relax, but relax I did—eventually. There was something pleasant about being around the canal waterways, toepaths, happy gongoozelers, beautiful scenery, and cozy boat lodging. Standing for hours driving the boat in the fresh air made the food taste better and the bed feel softer. The best tan I ever got was from commanding this narrowboat. There’s also something charmed about greeting the crew of a passing boat or wishing good day to the many dog walkers on the towpath. 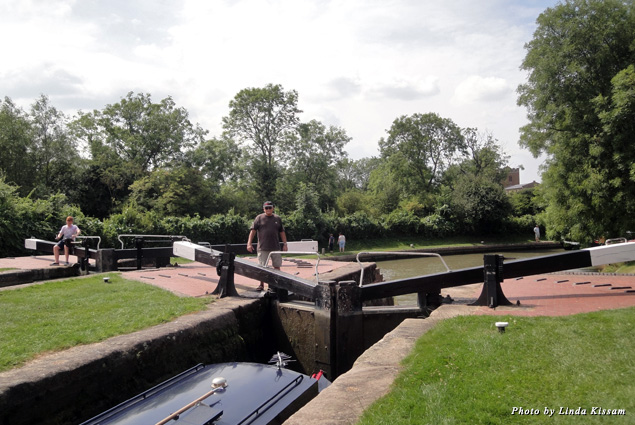 The rebirth of the canals as highways for leisure is one of the best success stories of modern Britain, accomplished by volunteers who, over half a century, have surrendered evenings and weekends to rebuild collapsed banks and clear mud and junk from clogged locks. The result is a network of waterways—canals and river navigations—more than 2,000 miles in length, home to 35,000 licensed craft and visited by 200,000 people a year. In addition, it is thought some 50,000 people make their home on the waterways, a subculture unnoticed by the rest of Britain, reflective of a quieter past.

I enjoyed this trip. If you’re looking for a “time out” via a unique vehicle, the narrowboat option is it. It’s hard not to succumb to the pace of life on the water and shed at least a few of life’s cares.

Time Frame: One week.
Cost: Seasonal pricing from about $1,329.24 to $1,821.68 without specials or promotions.
Bring: A sunhat, sunblock, sturdy shoes, and all the food and drinks you think you might want. Stopping at a grocery store or pub is not always possible.
Tip: Napton Narrowboats will stock your boat fridge and cupboards with food from a grocery list you create and pay for.
Remember: Relax and don’t hurry. We were underway four to five hours a day. You can also try just two-hour days. There’s plenty to see and do once you moor on the side of the canal. Internet is available in many places.