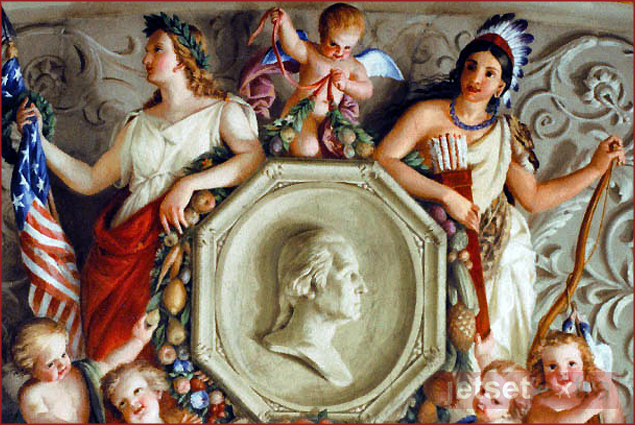 In researching for our first-ever United States tour, Esoteric America, I discovered a forgotten fact: America has its own goddess. The name Columbia was originally used to refer to the colonies prior to the American Revolution. She was based on the explorer Columbus’s name and the principals of liberty, beauty, justice, and, well … the excellent qualities you would want a goddess to embody.

Then, when creating the United States, the Founding Fathers decided America needed to have two ladies representing her: Columbia and an Indian princess. These two women, who would remind the new nation of both its intentions and its history, were incorporated into designs all over the newly minted city of Washington, including in the Capitol building. Later, the Indian princess was deemed an unfortunate memento and her image was phased out; in the last century, even Columbia was usurped by Lady Liberty, her statue a prominent display of American ideals.

Though I had never heard of Columbia my new awareness tuned me in; her image or name were everywhere: Columbia Records, the District of Columbia, Columbia University. On Columbia Pictures, the goddess is even represented with a torch à la her famous sister. Were the feminine aspects of Columbia intended to balance the patriarchal founding of these endeavors? I didn’t think the men would have cared, but there she was, over and over again. During the Age of Enlightenment, hidden layers were often placed in everything from buildings and art to documents and speeches, with the idea that reason over blind faith, science over speculation and superstition would eventually overtake the general population.

What can we, as modern, generally more enlightened individuals, learn from the goddess Columbia? To look for hidden meaning and be aware that not everything is available to us on the surface; sometimes, the deeper layers are worth uncovering. To remember that the Founding Fathers of these United States fought hard for the principals that Columbia represented, and not to take our own liberties or the idea of justice (or beauty, for that matter) for granted. To strive for a more conscious future instead of being complacent in our daily lives. The goddess Columbia would have expected no less.