Coffee With a View at The Rocks’ Aroma Festival 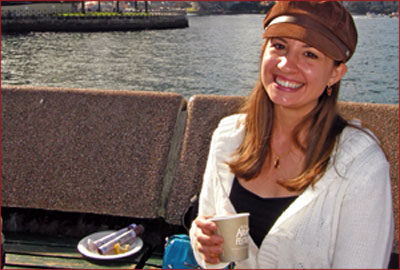 When you compare Australia to Europe or the U.S., it begins to feel very new as a country.

Part of its appeal is that sense of a country still discovering itself, but it does make it more difficult to find ‘history.’

However, nowhere is this less true than in The Rocks, Sydney, one of the country’s oldest neighbourhoods. I’ve always found character in its sandstone buildings, angular roads, and hidden glimpses of two of the nation’s most famous icons: the Sydney Opera House and Harbour Bridge.

We chose to explore it during the Aroma Festival, an annual celebration of all things coffee, tea, chocolate and spice.

The festival takes place in Southern Hemisphere winter (July-August) every year. This year, there were more than 100 stalls offering tastes and aromas by region: The Oasis (Turkish), The Orient (Asia), The Latin Quarter (Latin America), and The Continent (Europe). In addition to the sumptuous desserts, coffees, and condiments offered in each region, each section had live musicians and several offered classes, including a Specialty Coffee Masterclass.

With 100 stalls, be prepared to pace yourself and pre-select what ‘aromas’ you’d like to sample. Otherwise the long lines and variety mean you’ll never make it through.

I chose Turkish coffee, because I love it and it’s different than my Monday to Friday daily drop. The Turkish stalls also had the best view; it felt something like a daydream sipping coffee in front of the Opera House and Harbour Bridge. 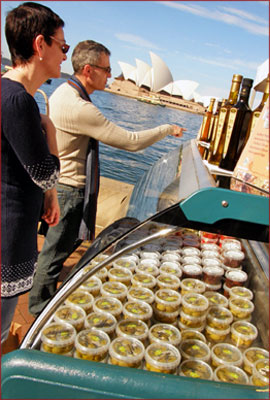 I’d love to describe the aromas, but – in the spirit of full disclosure – this hot beverage aficionado has no sense of smell, so (unfortunately) you won’t hear about it here.

The Aroma Festival is crowded, especially around the limited food stalls, so be forewarned. However, it’s worth it. If nothing else, it’s a great excuse for a day out in The Rocks.

Located next to Circular Quay, The Rocks is accessible by both ferry and train. For more information on The Aroma Festival and other events in the neighbourhood, see The Rocks annual events website.