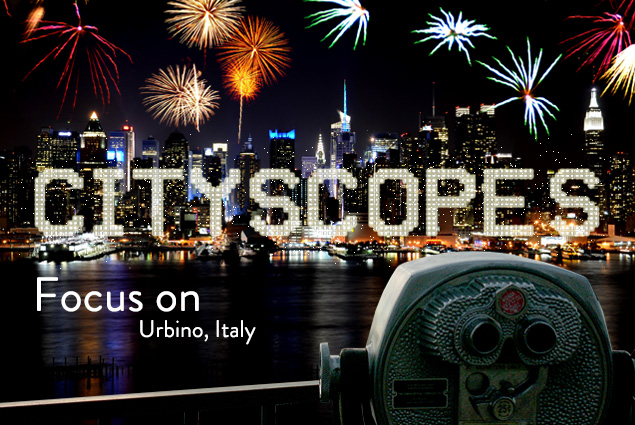 Though Italian cities such as Rome, Florence, and Venice seem to receive the majority of travelers’ attention—and deservedly so—the country is home to many special towns full of medieval history, picturesque views, and unforgettable experiences. Urbino, a UNESCO World Heritage Site, is one such place—a walled-in Renaissance town nestled against twin hills in the Marche region of central Italy.

Originally called Urvinum Mataurense, from urvusa, referring to the land’s ploughshare-like shape, and Metaurus, the name of a nearby river, this area was first settled by the Romans in the 4th century BCE. They granted Urbino municipium (city-statehood) in 46 BCE, which allowed the town to remain self-governing with little interference. Urbino set itself apart from its more agriculturally based neighbors, instead evolving into an administrative center with a people’s assembly, a senate with magistrates, and its own high priest. 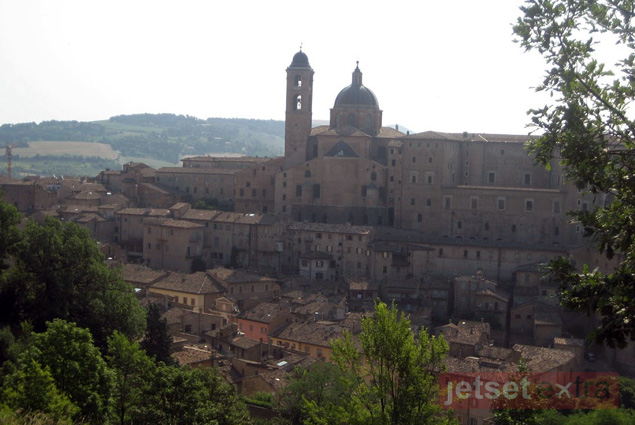 Urbino’s story really gets going in the 13th century, upon the arrival of the Montefeltro family. Under Montefeltro leadership, the town began to move out of the Middle Ages and into a period of political, financial, and artistic achievement.

Most notable of the Montefeltro’s is Federico, who served as duke of Urbino from 1444 until his death in 1482—and who Baldassare Castiglione called the “light of Italy” in “The Book of the Courtier.” Federico found success on the battlefield and in the courtroom and was a great supporter of arts and literature. He used his scholarly upbringing to turn Urbino into one of the most prominent courts in Europe and a rival to Florence as a prime example of the Renaissance.

With Federico at the helm, Urbino’s economy thrived and its residents were introduced to the work of many renowned poets, painters, and musicians, including Luciano Laurana, Leon Battista Alberti, Piero della Francesca, and Francesco di Giorgio Martini. Architect Donato Bramante, an Urbino native, began his journey to becoming a master of his craft during this time.

Urbino’s most well known connection to the art world, however, is its role as the birthplace of Raphael. The artist’s father, Giovanni Santi, was Federico’s court painter and poet and well integrated in the duke’s central circle. Though Federico died the year before Raphael was born, the future famous artist and architect had the opportunity to learn the manners and social skills expected of ducal court members under Federico’s son Guidobaldo’s rule. Raphael eventually moved to Florence to foster his talents, but Urbino takes pride in being the place where his path to success began. A monument of the accomplished artist stands tall in a park at one of the city’s highest points. 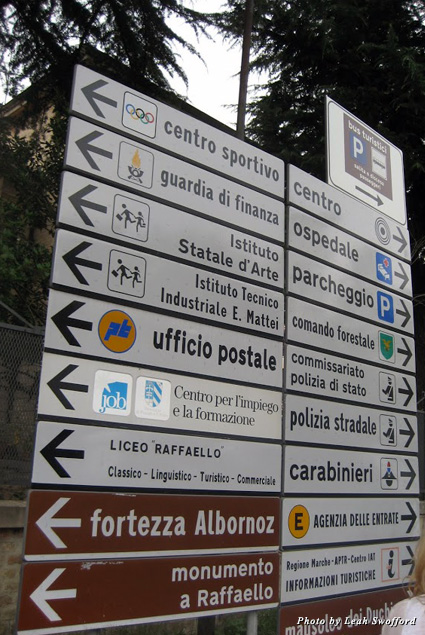 In 1508, after the death of Guidobaldo, Urbino experienced a period of decline. The court was moved to the nearby beach town of Pesaro shortly after the della Rovere family assumed the dukedom, and many great works of art, books, and other treasures were sent to Florence and Rome. Despite these losses and the many challenges the town of Urbino faced in the centuries to follow, it still held tight to its history as a political and artistic power.

Today, visitors can view works of art created in the 14th to 17th centuries at the Galleria Nazionale delle Marche, which occupies 80 renovated rooms in the Palazzo Ducale. In addition to masterpieces by Luca Signorelli, Federico Barocci, and Paolo Uccello, highlights at the museum include Piero della Francesca’s Flagellation, Titian’s Resurrection, and Raphael’s La Muta. The palace itself is very well preserved, with grand turrets, Corinthian columns, and intricate woodwork. The duke’s studio features beautiful trompe l’oeil-style inlaid wood paneled benches and shelves. 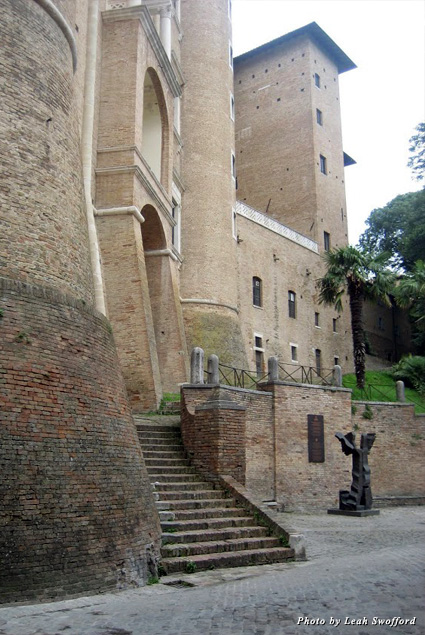 As with art, Urbino’s dedication to education didn’t begin and end with the Montefeltro family but continues to this day with the University of Urbino “Carlo Bo.” Founded in 1506, the university occupies buildings both inside and outside the city walls and offers programs in studies such as sociology, humanities, and languages for 20,000 students from all over the world. It is named for Carlo Bo, a poet, professor, literary critic, and Italian senator for life who served as president of the university for more than 50 years and worked to expand it in both size and stature. 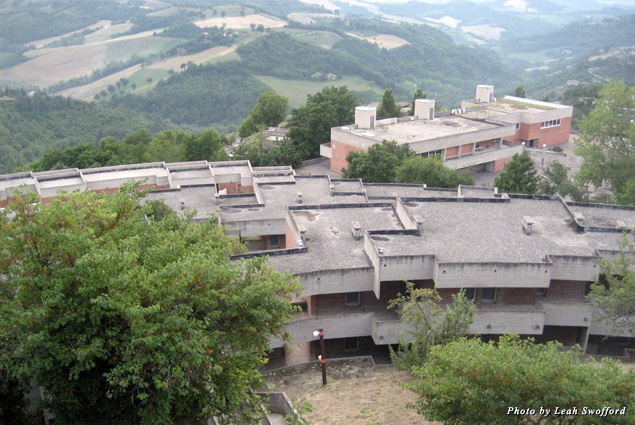 To get to Urbino, it’s a winding drive up rolling green hills to a car park and bus stop at the base of the town. You’ll enter the walled city on foot through a stone archway and climb a steep hill flanked by shops and restaurants before arriving in the Piazza della Repubblica, the main square. Gelateria Romana will greet you there; order a cone of your favorite flavor and get ready to wander. This climb will not be your last, and Urbino’s maze of Escher-like stairways and narrow stone streets are waiting to be explored.

Though you’ll find many opportunities for Instagrammable alleyways and architecture throughout your Urbino tour, the best overall views of the city and beyond are located at the Albornoz Fortress (“La Fortezza”) at Urbino’s highest point. Built in the 14th century to provide a defensive point for the surrounding walls, the spot is now a public park and the perfect place to take in the scenery while enjoying a picnic or a sunset walk. 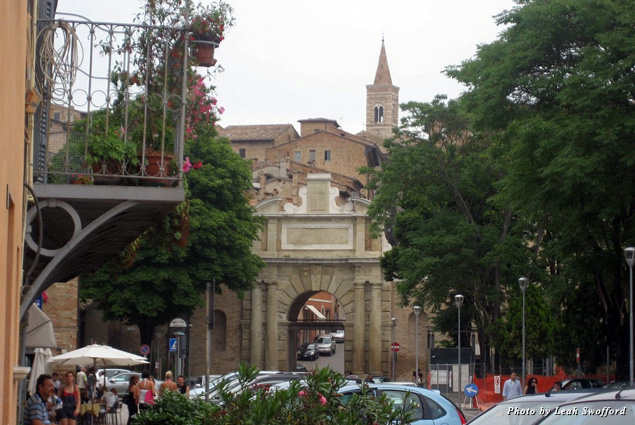 Be sure to visit two oratories found inside the city center and open to the public. At the Oratorio di San Giuseppe on Via Barocci you’ll find a magnificent 16th-century stucco nativity scene by Federico Brandani. Its neighbor, the Oratorio di San Giovanni Battista, features a preserved fresco created by brothers Lorenzo and Jacopo Salimbeni.

Architect Francesco di Giorgio Martini not only designed Urbino’s Palazzo Ducale but also the city’s Duomo, which was founded in 1021 and built on top of a 6th century religious structure. Completed in 1604, the cathedral was destroyed by an earthquake in 1789 and rebuilt in a Neo-classical style by architect Giuseppe Valadier. Glass, ceramics, and religious items as well as works including Federico Barocci’s Last Supper are on view in the Duomo’s Museo Diocesano Albani. 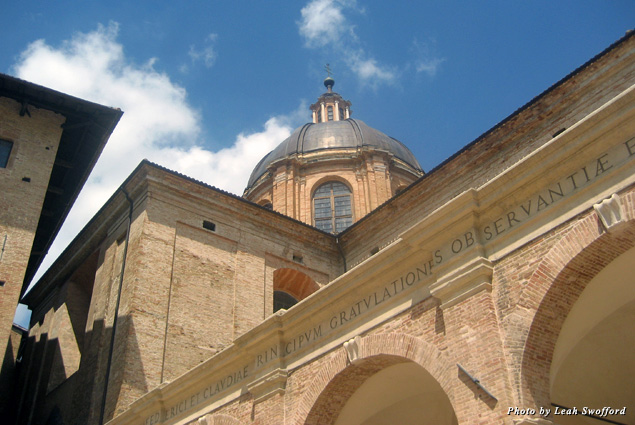 Urbino is a true Italian village, full of culture and charm. Its remote location tucked into a sloping hillside has helped preserve the walled city’s Renaissance past, and its proud residents have assembled it on display for the benefit of future generations.