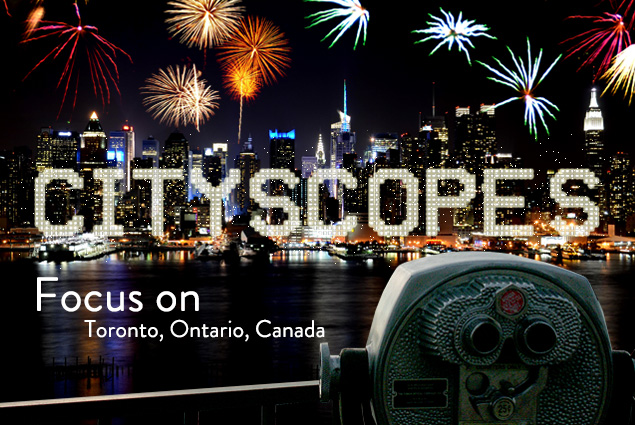 At the northern end of what is now Ontario, Canada’s Lake Simcoe, the Wyandot indigenous people planted tree saplings to corral fish; this was later described by the Iroquois as a “place where trees stand in the water” and called tkaronto. Years later, after Europeans took over the region, a portage route from Lake Ontario to Lake Huron was developed through this point and the name became “Toronto.”

The Iroquois abandoned the region at the end of the Beaver Wars and were replaced by the Mississauga, who then negotiated sale of more than a quarter million acres of land in the Toronto area with the British in the Toronto Purchase of 1787. Governor John Graves Simcoe established the town of York (after Prince Frederick, Duke of York and Albany) on the settlement in 1793, and in 1834, York became a city and was renamed Toronto.

Though the city of Toronto was damaged in two huge fires in 1849 and 1904, it has grown to become the most populous city in Canada and one of the five most populous cities in North America. It is also one of the world’s most diverse cities, since nearly half of the population (49 percent) was born outside of the country. This diversity is reflected in the neighborhoods of the Old City of Toronto—which covers downtown and its surroundings—where visitors can find two small Chinatowns, Little Italy, Little Portugal, and Greektown. 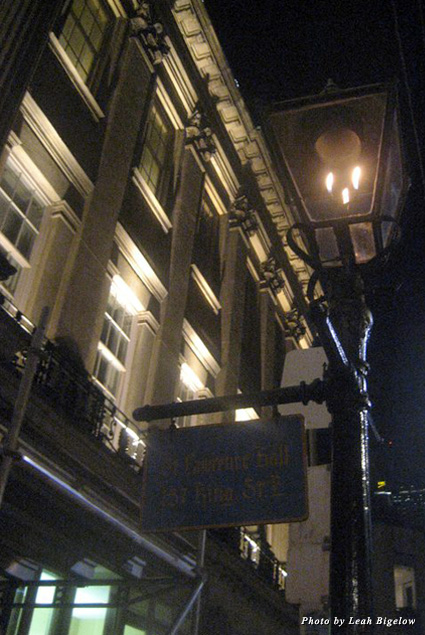 It is within Old Toronto that Canada’s commercial capital also lies. The city is home to the Toronto Stock Exchange as well as the headquarters of the country’s five largest banks. More than 50 buildings and office towers are connected through an underground pedestrian walkway called PATH. The system links to public transit and provides both residents and visitors with access to shopping, dining, and sports and cultural events without having to brave Toronto’s cold, snowy winters and hot summers. PATH was a welcome discovery during my first visit one cold weekend in late November. The city is a great one for walking and exploring, and it would have been a shame not to take advantage of that despite the freezing temperatures.

From underground to high up in the sky, no trip to Toronto would be complete without a visit to the CN Tower, an 1,815-foot-high communications and observation tower. Completed in 1976, the tower dominates the city’s skyline and holds the title as the tallest freestanding structure in the Western Hemisphere. The American Society of Civil Engineers declared it one of the modern Seven Wonders of the World in 1995. Visitors to the CN Tower will take one of six high-speed, glass-fronted elevators to several attractions, including the Outdoor Sky Terrace and the Glass Floor (at 1,122 feet above ground) and, just above that, the LookOut Level (at 1,136 feet). A special SkyPod elevator travels another 33 stories up to the 1,465-foot level, and especially daring guests can sign up for the EdgeWalk, a full-circle, hands-free walk on a five-foot-wide ledge around the tower’s main pod, while harnessed in to an overhead safety rail. 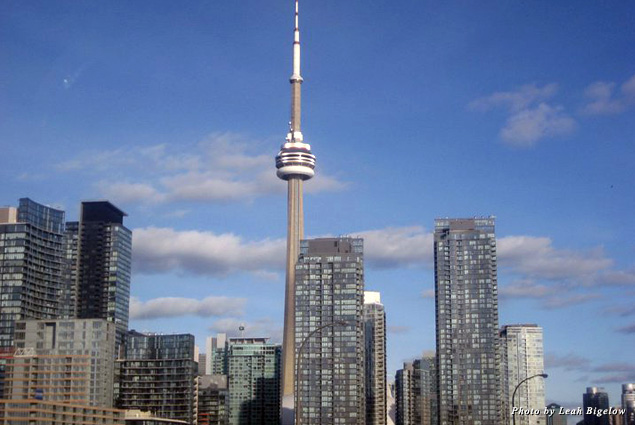 Those looking to splurge on a delicious meal should make a reservation for the rotating 360 The Restaurant at the CN Tower, which serves regional cuisine alongside breathtaking views. I was a bit nervous about the whole “rotating” part of the restaurant’s dining experience, but the venue turns so slowly I couldn’t even feel it, and the gradual change of scenery was instead a wonderful complement to my dinner. The menu is prix fixe for both lunch and dinner, with a la carte options available for the later meal; access to the LookOut and Glass Floor levels is complimentary with the purchase of a main course or prix fixe per person.

Though Toronto has many excellent dining options, I was on a mission to find cuisine that felt truly Canadian. In my mind this meant quarry, food hunted in the country’s vast wilderness. I could not have found a more perfect place—a restaurant aptly titled Beast, located on a residential-looking street in the city’s Niagara neighborhood. Though I ordered a ridiculously good burger off the menu (which changes weekly), more adventurous eaters can reserve a Whole Animal Dinner, in which you choose the animal—options range from lamb and duck to water buffalo and wild boar—and the folks at Beast will prepare a multi-course meal using the whole, well, beast.

It was on our way to Beast that we discovered Toronto’s vibrant film and theater districts, located close together and centered around King Street. The Toronto International Film Festival (TIFF) is the world’s largest public film festival and is headquartered at the TIFF Bell Lightbox, which hosts film-focused exhibitions and screenings throughout the year. Nearby are historic theaters including the Princess of Whales Theatre and the Royal Alexandra Theatre, the Canadian Opera Company, Roy Thomson Hall (home to the Toronto Symphony Orchestra), and the Second City comedy club. Toronto has much more to offer in the arts and entertainment categories, with smaller theaters and other venues found throughout the city.

One of my favorite spots to visit was the Distillery District, with its beautiful Victorian architecture that made it feel as though I had traveled back in time. Originally the site of the Gooderham and Worts Distillery, the district was restored in 2001 as an arts, culture, and entertainment village and officially opened as the Distillery Historic District in May 2003. It, too, has a connection to Toronto’s film industry; its brick buildings and streets have appeared in more than 1,700 films and television shows, including “Cinderella Man,” “Chicago,” and the CW’s “Beauty & the Beast.” 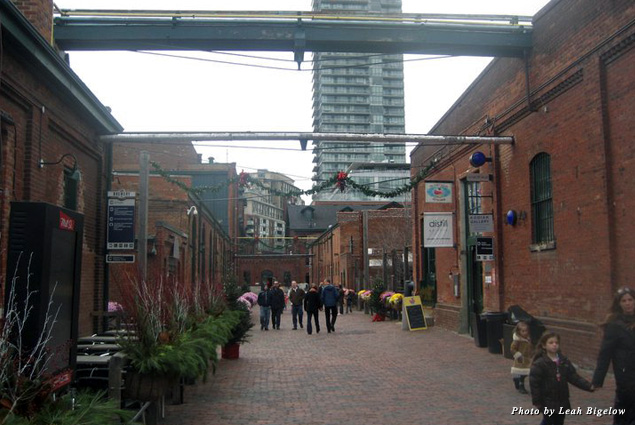 In addition to shops, furniture stores, and galleries, the Distillery District offers several food and drink options, depending what you’re in the mood for. Perhaps you’d like an artisanal coffee from Balzac’s or a baked treat from the Sweet Escape Pâtisserie? If a good, locally made craft beer is what you’re after, be sure to stop at Mill Street Brew Pub, the first commercial microbrewery to open in East Toronto in more than a century. Visitors can partake in a beer tasting at the on-site retail store, take an on-site brewery tour, or order a pint with lunch or dinner.

Moving from a historic district to a historic street, Yonge Street runs north from Lake Ontario and is sometimes referred to as “Main Street Ontario.” In downtown Toronto, Yonge is where visitors will find a celebration of one of Canada’s greatest pastimes: hockey. The Hockey Hall of Fame is located in the former head office of the Bank of Montreal, a striking structure built in 1885. A joint museum and hall of fame dedicated to the sport of ice hockey, the venue contains exhibits about the National Hockey League and its teams, an incredible selection of memorabilia, and several NHL trophies, including the coveted Stanley Cup. 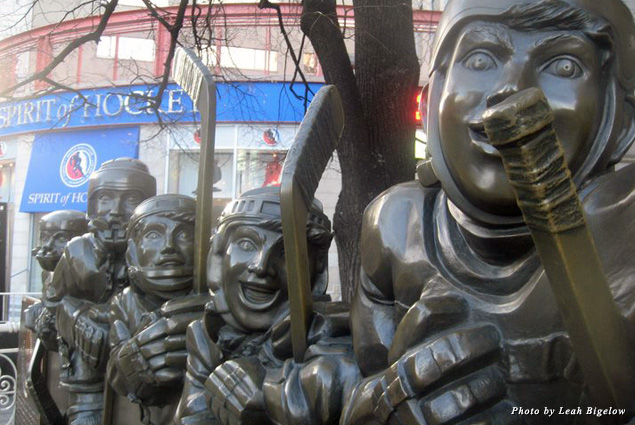 As a hockey fan myself (go Ducks!), I soaked up all I could about the sport’s history and memorable moments throughout the years. One of the highlights, of course, was taking a picture with the Cup, though I also greatly enjoyed trying out my (very poor) hockey skills against life-size, animated versions of some the sport’s best shooters and goalies in the NHLPA Game Time interactive zone and trying my hand at calling the play-by-play of great NHL game moments in the TSN/RDS Broadcast Pods.

Of the many Hockey Hall of Fame inductees, one that made an appearance elsewhere in my Toronto exploration was defenseman Tim Horton, who played in the league for 24 seasons. In 1964, while a member of the Toronto Maple Leafs, Horton opened his first Tim Horton Doughnut Shop in nearby Hamilton, Ontario. The chain, now known simply as Tim Hortons, has since expanded to more than 4,500 locations in Canada, more than 800 in the United States, and nearly 40 in the Persian Gulf region. The quick-service restaurant serves coffee, donuts, and other food and drink items, so do yourself a favor and find your closest Tim Hortons—they’re everywhere in Toronto—for a hot chocolate and some Timbits®. 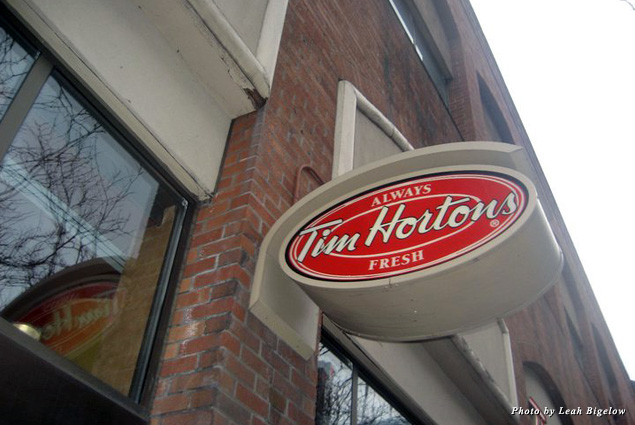 Just west of the Air Canada Centre is Rogers Centre, the location of games for Major League Baseball’s Toronto Blue Jays and the Canadian Football League’s Toronto Argonauts. If soccer is more your thing, get tickets for a Toronto FC game at BMO Field. 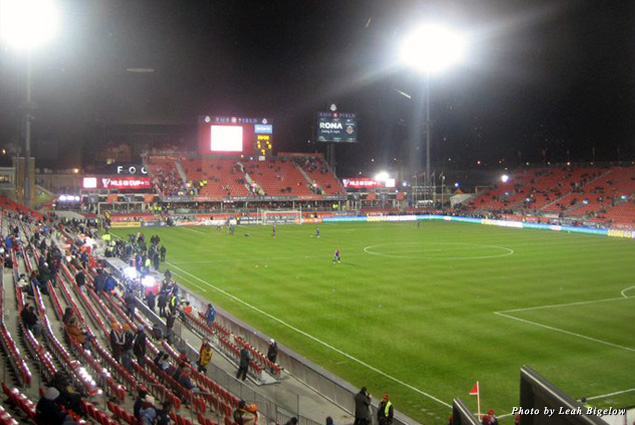 Those who would prefer to shop till they dropped will enjoy the Toronto Eaton Centre, the city’s largest mall filled with more than 230 retailers and restaurants. The Eaton Centre is linked to Hudson’s Bay Queen Street, the flagship store of the Canadian department store. Shoppers looking for more unique finds can browse the stores on Queen West and Ossington or visit St. Lawrence Market for one-of-a-kind items from 120 merchants and artisans.

With all the amazing options for dining, shopping, entertainment, and discovery Toronto offers it’s no wonder the city is consistently rated one of the most livable by the Economic Intelligence Unit and the Mercer Quality of Living Survey. It was such a fun city to visit, and I look forward to my return to see old favorites and find new neighborhoods, restaurants, and boutiques to explore.