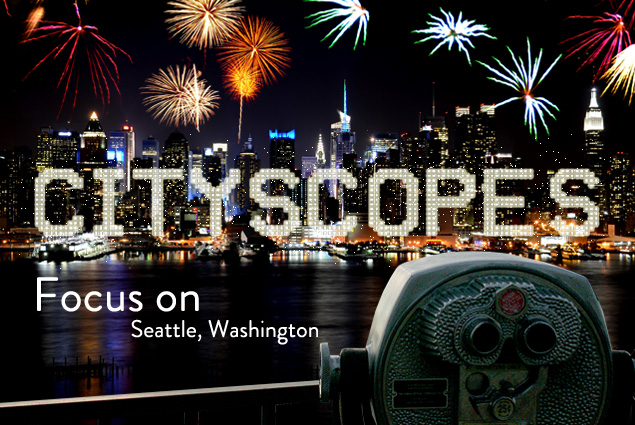 What do you seek out when visiting a destination for the first time? Throughout her travels, managing editor Leah Swofford learned she loves discovering what makes a city especially unique. The weather, the cuisine, the way people interact with one another—it all combines to make each destination special in its own way. With her new column “Cityscopes,” Leah hopes to capture those qualities and offer ways to incorporate them in your next trip. 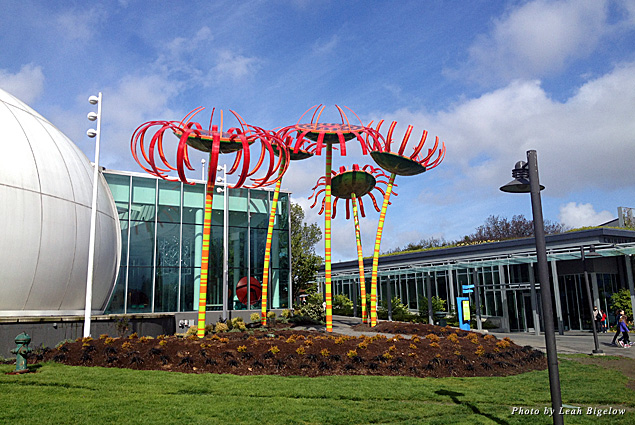 What do you think of when you hear the name Seattle, Washington? For me, the first thing that comes to mind is rain, which seems to be a common thought; many friends groaned when I told them I’d be spending a long weekend away from hot, sunny Southern California and heading to the Pacific Northwest city.

“Enjoy the rain!” they said sarcastically, to which I thanked them and said I would. Los Angeles—and the rest of California—apparently decided to breeze through winter and gloss over spring this year, so I was more than happy to head to a place with cooler temperatures, cleaner air, and lush, green scenery.

My wish was granted as soon as we landed at the Seattle-Tacoma International Airport. The skies were gray and a light rain fell as we made our way through downtown to a neighborhood on the outskirts of the city. Of course, with rain often comes the chance of spotting a prism of color in the sky; Seattle decided to greet us with a double rainbow, a lucky sign in my book.

(An interesting note: Despite cloudy skies 200 days out of the year, Seattle receives an annual average of 37 inches of rain, which is less than in Boston, New York, Atlanta, and almost everywhere east of the Mississippi River.) 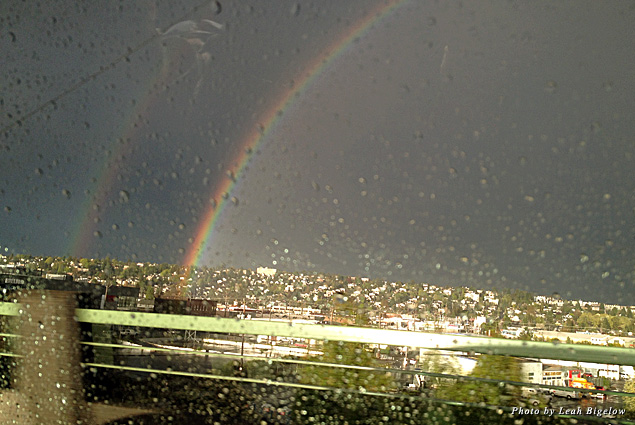 Besides the fact we don’t have many rainy days in LA, I think another reason why I love dreary weather is because it’s an excuse to hole up in a warm and cozy coffee shop for an hour or two. Perhaps that’s why coffee conglomerate Starbucks has its origins in Seattle. The first Starbucks opened in the city in 1971 by three partners who learned the coffee-roasting trade from entrepreneur Alfred Peet (yes, of Peet’s Coffee & Tea). While its original location was on Western Avenue, the Starbucks store later moved to 1912 Pike Place Market and remains there to this day.

While Starbucks stores are certainly common is Seattle (as they seem to be everywhere else, too), there are plenty of other places—both independent and chain—to get your caffeine fix. For a break in between exploring the Space Needle and the EMP Musuem at Seattle Center, my fiancé and I wandered down Fifth Avenue to Artisan Café. The small café on the bottom floor of an apartment complex serves coffee, espresso, and tea as well as breakfast pastries and entrées, hot and cold sandwiches, Vietnamese baguettes, salads, and soups. It was warm, inviting, and the perfect place to recharge. 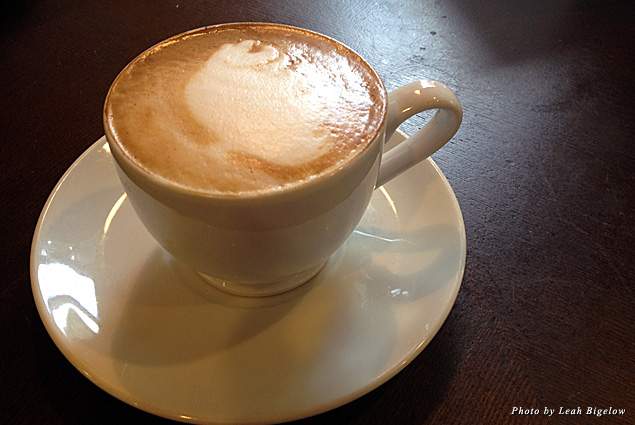 It was during our next stop, the EMP Museum, that we learned more about Seattle’s iconic sound. Grunge, a subgenre of alternative rock, traces its roots back to 1980s Washington and the Seattle area in particular. Although independent record label Sub Pop dominated the early grunge movement, the genre saw mainstream success in the first half of the 1990s with the release of albums from Seattle-based bands Nirvana, Pearl Jam, Soundgarden, and Alice in Chains.

The grunge movement faded by the late ’90s, but its influence on modern rock music remains. Its timeline is on display in the EMP Museum’s fascinating exhibit “Nirvana: Taking Punk to the Masses”, which is scheduled to run through the summer. The exhibit goes in-depth about Nirvana’s origins and its transition from the underground to the mainstream music scene, as well as displays iconic instruments, original poster artwork, photographs, performance footage, and interviews with important figures during that time period. 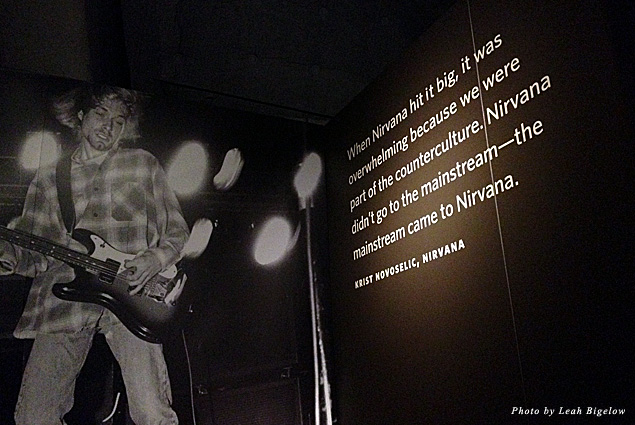 Grunge isn’t the only music genre to have origins in Seattle. The city is also home to a variety of performers, including the classic rock band Heart, smooth jazz saxophonist Kenny G, and rappers Sir Mix-a-Lot and Macklemore. Fans of classical music can find it at the century-old Seattle Symphony Orchestra, while Broadway lovers can get their fix at the 5th Avenue Theatre.

Those looking for outdoor activities will find locations to walk, bike, hike, kayak, sail, and swim throughout the greater Seattle area. The Olympic Sculpture Park, a nine-acre outdoor sculpture museum and beach, combines several interests in one and allows visitors to view art in a unique setting. Chihuly Garden and Glass not only mixes sculptor Dale Chihuly’s creative and colorful work outside among flowers and plants but also illuminates pieces in an indoor exhibition hall. 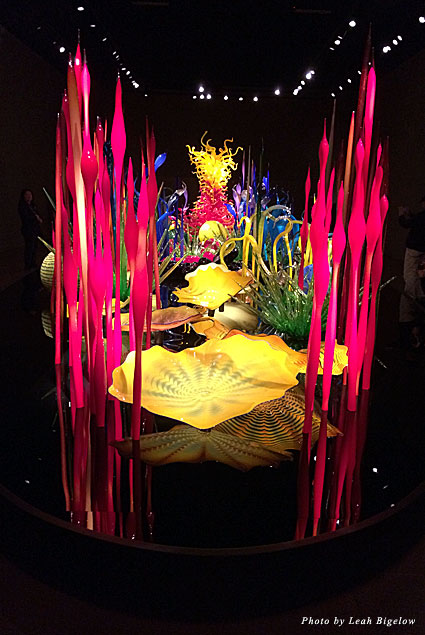 Other institutions highlight the Seattle’s past, such as at the Museum of History and Industry and the Klondike Gold Rush National Historical Park. The Center for Wooden Boats documents the region’s maritime history.

Another great place to enjoy the outdoors and get a sense of Seattle’s strong link to the water is at the Hiram M. Chittenden Locks. The locks are located at the west end of Salmon Bay, a part of the canal that links Lake Washington to Puget Sound, and prevent the mixing of Puget Sound’s seawater with the lake’s freshwater. This is also the site of a fish ladder to help salmon pass around the locks and spillway dam. Visitors to the locks can watch as the salmon move along their route; the peak time for the salmon run is the beginning of July through mid-August. 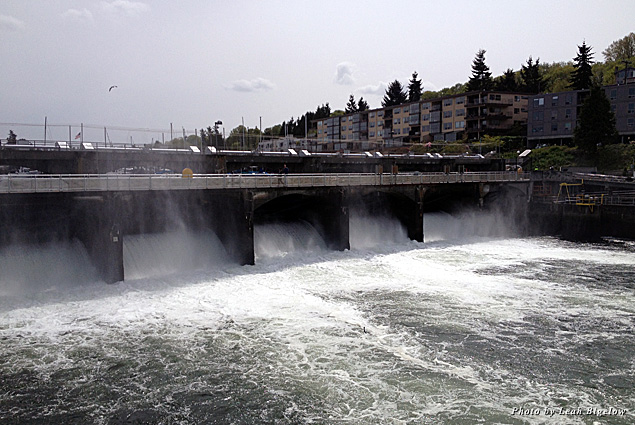 Seattle constantly invites visitors to explore, both indoors and out. Don’t let a possibility of gray skies and a little rain prevent you from taking in all the art, music, food, history and more the city has to offer.