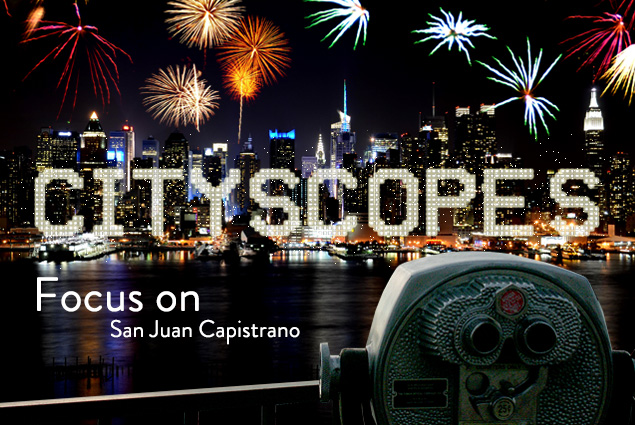 When sailor and writer Richard Henry Dana Jr. visited Southern California in the 1830s, he described San Juan Capistrano as, “the only romantic spot in California.” Author Johnston McCulley was so inspired by the surroundings he set his first Zorro novella, 1919’s “The Curse of Capistrano” (which later became the novel “The Mark of Zorro”), amid the town and its surrounding California countryside. Nearly 200 years later, the birthplace of Orange County still draws visitors to admire its beauty and explore its history.

Today, San Juan Capistrano is home to approximately 35,000 residents who live in the widest variety of homes in the county: adobes from the 18th century and others built prior to 1900, working ranches in the foothills, and multi-million-dollar mansions in gated communities. Many of these homes and other buildings reflect the Spanish architecture of Mission San Juan Capistrano, for which the city takes its name and credits its foundation. 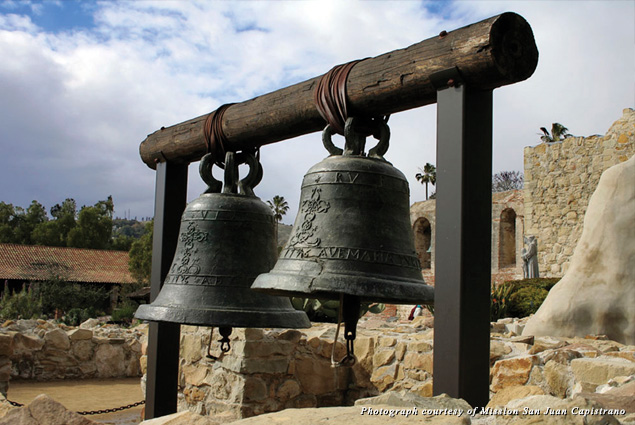 Established in 1776, the mission was named after a Franciscan saint called Giovanni da Capistrano, who originally hailed from Capestrano in the Italian region of Abruzzo. Native American Acjachemen, which the Spanish called Juaneños, lived in the region during the time of the mission’s founding and are recognized today as the Juaneño Band of Mission Indians, Acjachemen Nation. Though an earthquake destroyed the mission’s original stone church in 1812, the neighboring Mission Basilica San Juan Capistrano (opened in 1986) stands as an example of its design. The mission’s Serra Chapel is considered the oldest in-use building in the state.

Once attracted by the mission’s tall buildings, the protected cliff swallows would migrate from Goya, Argentina, to San Juan Capistrano every year on St. Joseph’s Day (March 19). Though the famous swallows have not returned to the city since 2009—lured by urban sprawl, they now choose to nest in the more northern Chino Hills area—San Juan Capistrano still celebrates the flights of swallows past with an annual Swallows Day Parade (Fiesta de las Golondrinas) and other festivities. American rock and R&B music composer Leon René wrote a love song about these annual events, “When the Swallows Come Back to Capistrano,” which spent several weeks at the top of the “Your Hit Parade” charts in 1940. 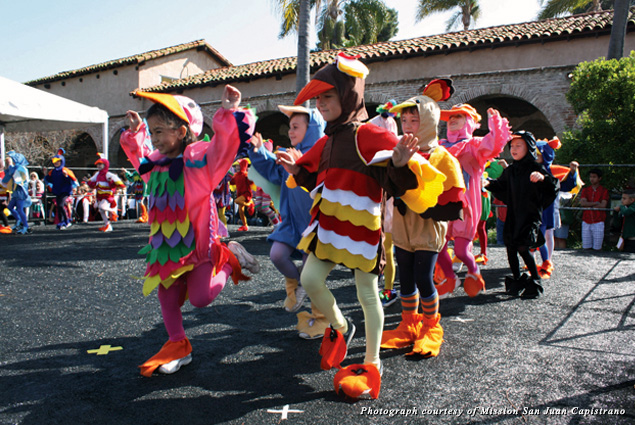 The swallows may no longer come back to Capistrano, but locals and visitors do some flocking of their own to the Swallow’s Inn, located just down the street from the mission. The old-school country-western bar first opened in the late 1920s as El Traguito, a play on words that means both “little swallow” and “little drink” in Spanish. It took its current name under new ownership in the mid-1950s. Swallow’s Inn is the place to be for live music several nights a week.

With the mission serving as a catalyst for the creation of San Juan Capistrano, the Los Rios District—located adjacent to the mission across a row of train tracks—holds the title as the oldest residential neighborhood in California. Forty homes still remain here, including three adobe structures, along 600 feet of original road. One of these structures, the Montanez Adobe, was built in 1794 and served as the site of religious services when the mission was not in operation. 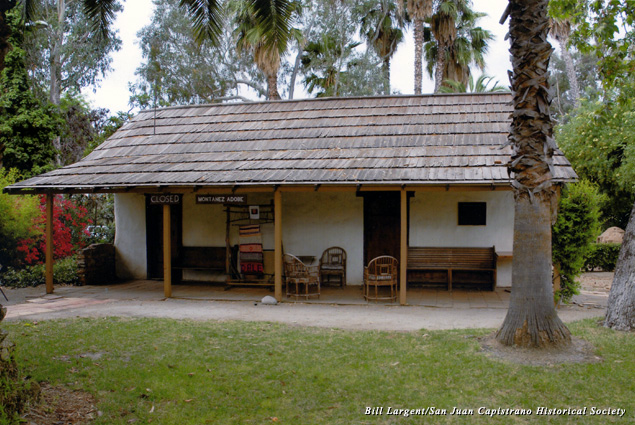 Though many houses on this street are private residences, some, like the Montanez Adobe, are open to the public and offer gifts, collectables, and refreshments. The Tea House on Los Rios is a lovely spot for special events and celebrations. The Garcia/Pryor House, built between 1870 and 1880 as one the first frame houses in San Juan Capistrano, is now the site of the O’Neill Museum and serves as the San Juan Capistrano Historical Society headquarters. Ponies, pigs, chickens, and cows graze as they’ve done for nearly 200 years at the Zoomars Petting Zoo. 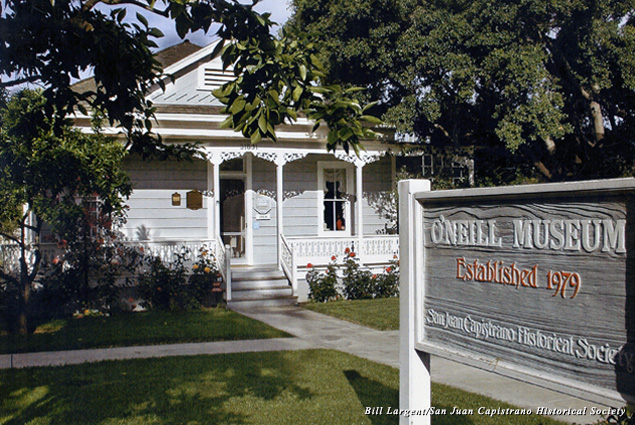 The nearby Capistrano Depot, an early example of Mission Revival Style architecture in railway stations, opened in 1894 and was operated by the Atchison, Topeka, and Santa Fe Railway until it closed in 1966. In 1974, rail service began again, though Sarducci’s restaurant took over the space just one year later. Dine inside or choose to sit outside beneath a 100-year-old pepper tree while soaking in the history of Los Rios Street and Old San Juan. Amtrak and Metrolink now serve the railway, with ticketing services and a waiting room located in two boxcars. 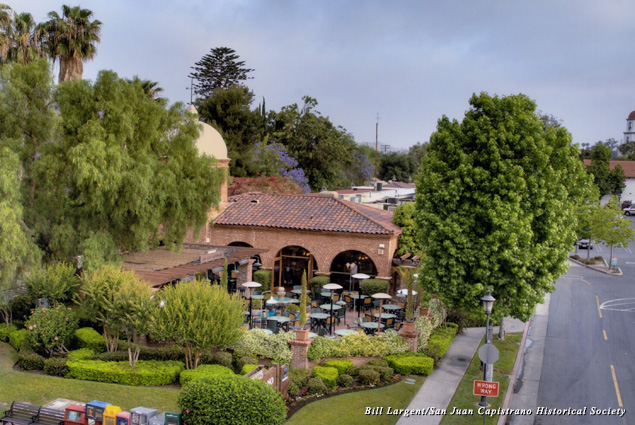 Another restaurant of note is El Adobe de Capistrano, which opened in 1948 and is recognized as a California State Historical Landmark. El Adobe’s history dates back to 1797, when its northern section was the home of Miguel Yorba. In 1812, the building’s southern half became the town court and jails, known as the Juzgado. Today, Mr. Yorba’s former home forms the restaurant’s cocktail lounge, while the Juzgado’s jail cell has become a wine cellar. Former President Richard Nixon, a Southern California native, inspired the restaurant’s shift from a continental menu to one of Mexican cuisine with his fondness for the Mexican dishes El Adobe’s chef would prepare for him.

For more historical discoveries, head across the street to the Egan House. Built in 1883 (and rebuilt in 1898 after a fire), the Victorian/Greek Revival building belonged to Judge Richard Egan, who named it Harmony Hall and hosted many a ball, picnic, and dinner party at his home. Though it has gone through several owners and incarnations in the past, the terra cotta brick building is currently in use as a boutique. 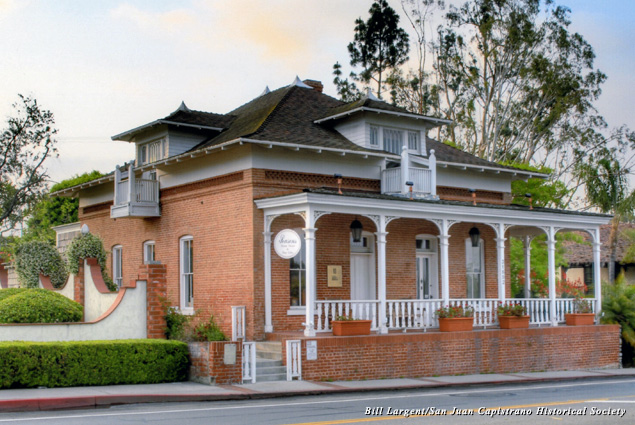 Those in search of stunning architecture will enjoy a visit to the San Juan Capistrano Regional Library. Designed by Michael Graves, the library has received awards from architectural societies around the world.

Though it may be overshadowed by neighboring Orange County cities (not to mention Los Angeles to the north and San Diego to the south), San Juan Capistrano is a historical gem and worth a visit to soak up stories about Southern California’s past.

Have the ultimate San Juan Capistrano visit! Here’s your mini guide to its…