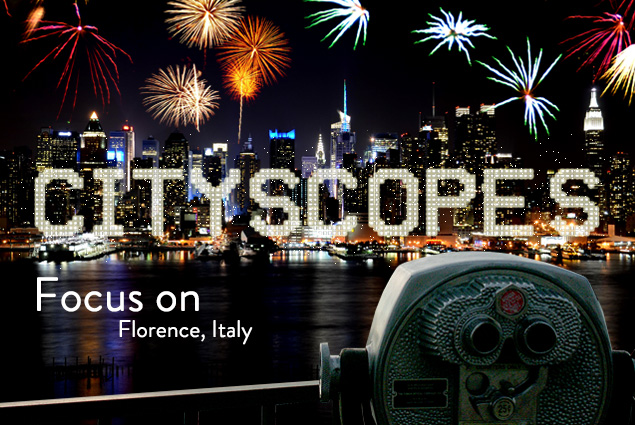 Over thousands of years, our world has developed a vast and fascinating history, and many ancient cities still hold on to elements of the past that made them stand out above the rest. Florence, Italy, is one such city; its inhabitants have been influential characters in art, architecture, politics, religion, literature, fashion, and information for centuries, and their contributions to society are preserved and on display in Florence today.

Florence is the capital city of Tuscany, a region in Italy, and of the province of Florence. It is considered the birthplace of the Renaissance, a center of medieval European trade and finance, and one of the wealthiest cities of all time. In 1982, the United Nations Educational, Scientific, and Cultural Organization (UNESCO) declared Florence a World Heritage Site. While it seems treasures are found down nearly every street, it’s also worthwhile to take in the city’s beauty as a whole—atop one of it’s highest points at the San Miniato al Monte basilica.

Though many prominent figures have called Florence home, it is impossible to talk about the city’s history without mentioning the Medici family, whose wealth and influence in Florence and beyond spanned from the late 14th to the early 18th centuries. As the banking family grew it gained political power and eventually produced four popes and two regent queens of France; the family became hereditary Dukes of Florence in 1531, a title that was later updated to a grand duchy with territorial expansion. 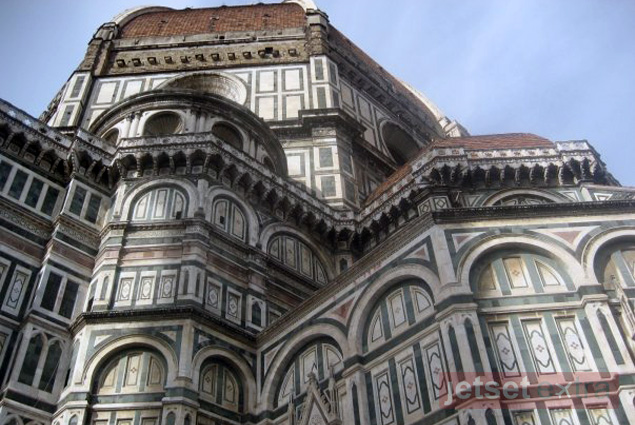 The Medici family was responsible for a great deal of the Florentine art created during its reign. It was with their sponsorship that brilliant artists and architects—Brunelleschi, Donatello, Michelangelo, da Vinci—were able to produce their masterpieces. The Palazzo Medici Riccardi, which at one time symbolized Medici political and cultural dominance, today showcases not only its Michelozzo-designed Renaissance architecture and later Baroque modifications but also more than 400 years of Florence’s history in art and architecture. Medici Florence is prominently on display in Benozzo Gozzoli’s frescoes, found in the palazzo’s Chapel of the Magi.

Florence’s wealth of aesthetic greatness can seem overwhelming and endless. The city does not just have museums, it has churches and palaces and piazzas brimming with masterpieces cherished for centuries; often the building is worth as much admiration as the art it contains. During my visit to Florence, I was unfortunately on a very limited time frame to take in all the wonderful art, architecture, and history this great city has to offer. Luckily, I Bike Florence was able to come to my rescue. The company offers bike tours and excursions led by knowledgeable, English-speaking guides and takes riders on a two-hour trip down narrow pedestrian streets to see both iconic Florence sights and the more unknown parts of the city. 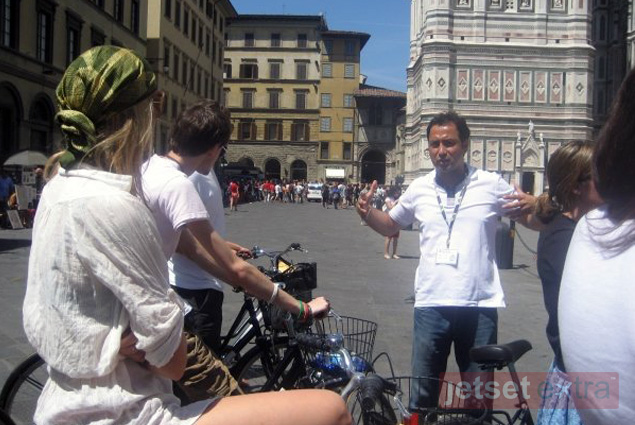 Our tour began at the I Bike Florence office on Via Calzaiuoli near Signoria Square. We picked up our bikes and began our journey back in time, from the Neo-Gothic Franciscan Basilica of Santa Croce, where we found Giotto frescoes and the tombs of Michelangelo and Galileo, to Brunelleschi’s St. Spirito Basilica, with its Baroque altar and art-filled interior. We rode past the Palazzo Vecchio, Florence’s Romanesque town hall that overlooks the Piazza della Signoria and Loggia dei Lanzi’s gallery of statues, and stopped in the Piazza del Duomo. 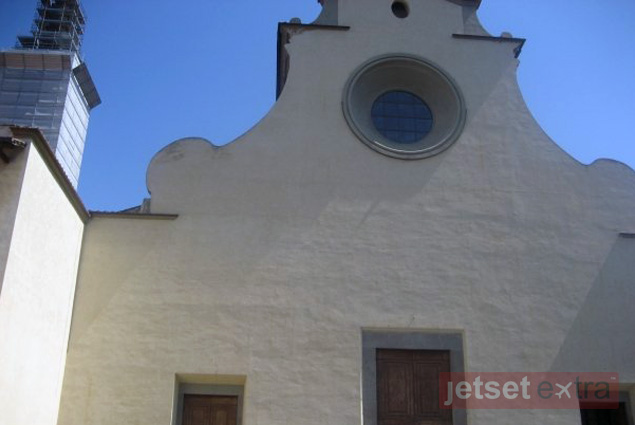 Il Duomo, or the Basilica di Santa Maria del Fiore as it is more formally known, is the main church of Florence and stands tall as the city’s historic center along with the Baptistery and Giotto’s bell tower (called a campanile). Construction on the Gothic-style basilica began in 1296 and was completed structurally in 1436, complete with a dome constructed by Brunelleschi that to this day remains the largest brick dome ever made. I was in awe of the ornate façade done in red, green, and white marble; it is no wonder the cathedral complex has become a Florence focal point.

A few blocks from Il Duomo, the Basilica of Santa Maria Novella features a stunning inlaid black and white marble façade, the upper part of which was designed by Leone Battista Alberti. Its interior includes stained glass windows from the 14th and 15th centuries and Gothic and early Renaissance frescoes. Santa Maria Novella is considered the first great basilica in Florence. 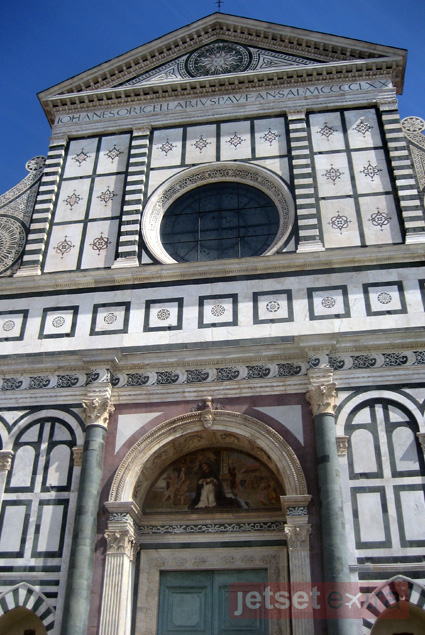 Continuing on our I Bike Florence tour we rode toward the Arno River, marveling at the 16th century Galleria degli Uffizi, an art museum containing Renaissance masterpieces that sits along the river’s edge. We crossed the Ponte alla Carraia to the district of Oltrarno as our guide pointed out the historic Ponte Vecchio, a bridge topped with rows of shops once occupied by butchers but now a place for jewelers, artists, and souvenir sellers to peddle their wares. 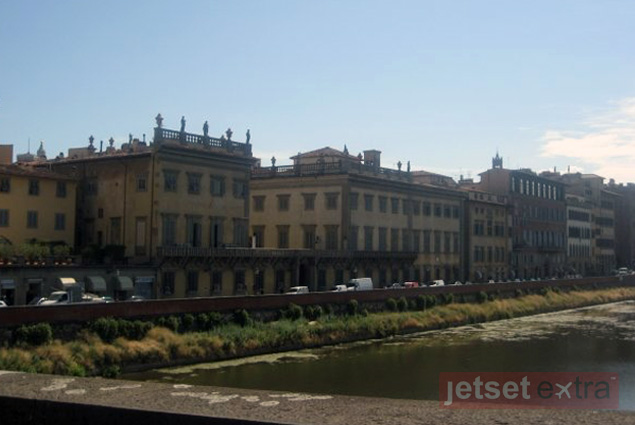 Once in the Oltrarno district we biked to the Palazzo Pitti, a Renaissance royal palace turned art gallery complex. Purchased by the Medici family in the mid-1500s, the property became the chief residence of the ruling families of the Grand Duchy of Tuscany and, in the 1700s, was used as a power base by Napoleon. Given its residents’ influential roles in Florence history, it is no wonder the palace accumulated a wealth of treasure—in the form of jewelry, paintings, plates, and other valuable possessions. Included in the museum complex—the largest in Florence—are galleries containing Renaissance and modern art, royal apartments, carriages, costumes, porcelain, and silver.

Behind the Palazzo Pitti are the Boboli Gardens. These public gardens were laid out in the 15th and 16th centuries and provide an early example of the Italian garden style. Originally designed for the Medici family, the gardens now welcome visitors and Florence locals who come to marvel at the ornate fountains and Renaissance statues.

Back on the other side of the Arno, after our bike tour had come to an end, we headed to the Galleria dell’Accademia. A visit to Florence really would not be complete without entering this museum to view Michelangelo’s “David”; the 17-foot-tall marble statue is a stunning work of art. Other Michelangelo statues on view at the Galleria dell’Accademia include “The Prisoners” and “St. Matthew.” The museum also highlights a collection of old musical instruments from the Cherubini Conservatory, sculptures in plaster by 19th-century sculptors Lorenzo Bartolini and Luigi Pampaloni, and late-gothic polyptychs. 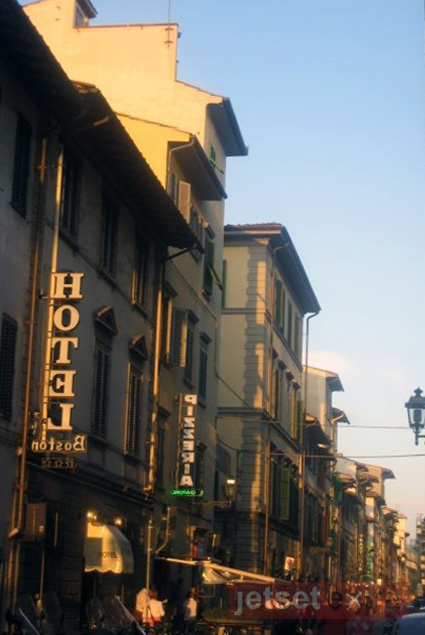 Florence did not only produce greatness in art, sculpture, and architecture. The city has also been home to literary masters, including writer, author, and poet Petrarch, known for “Canzoniere” (“The Book of Songs”); Giovanni Boccaccio, known for “Decameron”; and Niccolò Machiavelli, known for “The Prince.” The Casa di Dante Museum memorializes Dante Alighieri’s birthplace and currently houses exhibits about “The Divine Comedy” author’s life and work.

There are so many things to see and discover in Florence, and to fully take it all in you’ll need to also make time to rest and refuel. We spent our evenings in the Piazza della Repubblica. This square—once the location of a Roman forum—today provides a lively public space for street performers and live shows. It is also the spot where many of Florence’s prominent writers and artists have met, at historical literary cafés including Caffè Gilli, Caffè Paszkowski, and Caffè delle Giubbe Rosse. 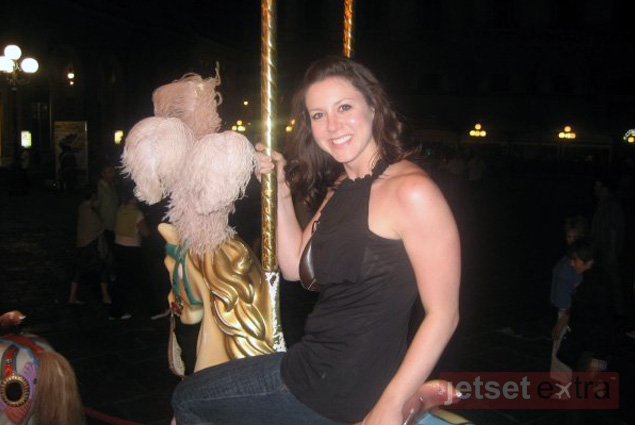 If you’re in Florence and only have a short amount of time to explore, I absolutely suggest giving I Bike Florence a call. Of course, if you have more time to spare, take it—book the bike tour first then return to your favorite spots to soak up all the wonderful history and knowledge Florence has to offer. There is no other city quite like it.