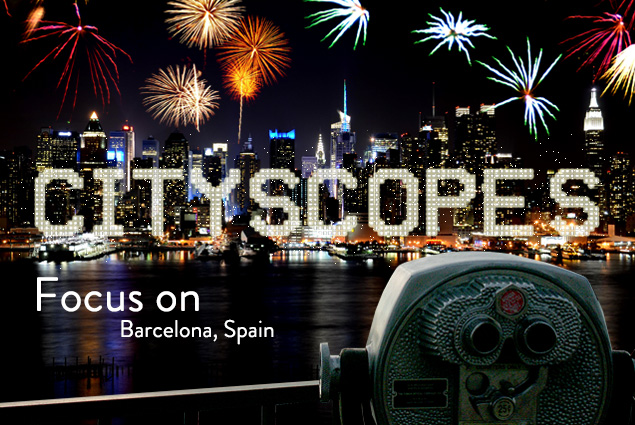 Beautiful Barcelona—Spain’s second most populated city and the capital of the country’s autonomous community Catalonia. Barcelona’s prime location on the Mediterranean coast has made it a sought-after spot over the last 2,000 years, notably by the Romans, whose grid plan remains today in the city’s historical center, the Barri Gòtic (Gothic Quarter). The area was then conquered by the Visigoths, the Arabs, and Charlemagne’s son Louis the Pious in quick succession, before a marriage merged the County of Barcelona with Aragon.

Through this union, the kingdom of Spain was born, and all of Catalonia (Barcelona included) came under Spanish rule. However, many Barcelona residents still hold onto Catalonia culture and language, and a growing separatist movement that began in the mid 19th century has some fighting for independence from Spain. The Estelada flag, which unofficially represents support for independence can be seen hanging from balconies of supporters throughout the city. 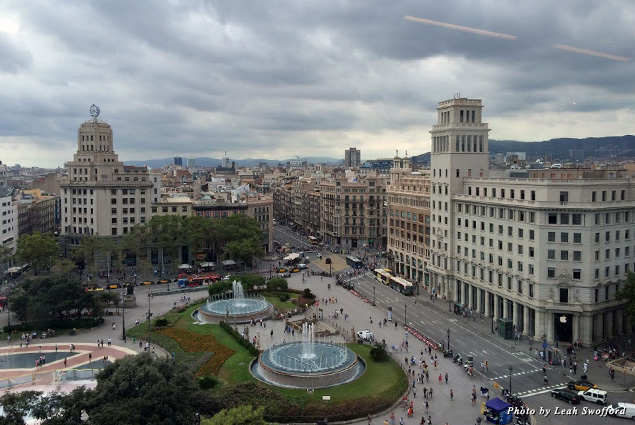 When traveling to Barcelona, I highly recommend purchasing a Barcelona Card for three, four, or five days in the city. Not only does the card allow visitors to skip the lines and receive free or discounted entry to top attractions, but also it grants unlimited free travel by bus, metro, or airport train. We bought our cards online before we left the States and picked them up at the tourist information center on our way out of the Barcelona-El Prat Airport. This meant we were able to walk right past the long line for train tickets and hop onto the train to the city center with no hassle. And, no matter where in Barcelona we planned to go, there was never a need to spend more time or money on metro tickets.

We exited the train at the Passeig de Gràcia stop, just a few blocks from our hotel and a central point of activity during our stay. This avenue is known for shopping, business, and architecture and is considered the most expensive street in Barcelona and all of Spain. In the early 1800s, a pseudo-rural lane connected Barcelona and the then-separate town of Gràcia. By 1827, it had become a 138-foot-wide avenue where aristocrats came to show off their horse-riding skills and horse-drawn carriages, and by the time architect Pere Falqués i Urpi designed Passeig de Gràcia’s ornate benches and streetlights in 1906, the street was known as Barcelona’s most fashionable. 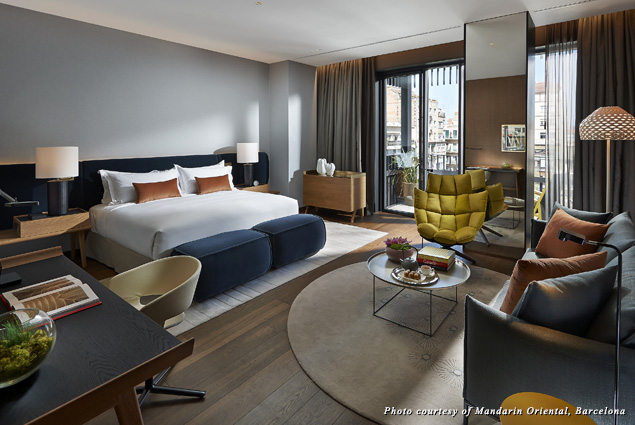 Passeig de Gràcia isn’t the only place to find examples of Gaudí’s unique architectural genius. Possibly his most well known work is the Sagrada Familia, a temple whose construction began on St. Joseph’s Day, March 19, in 1882. Gaudí joined the project a year later and began an as-yet-to-be-completed masterpiece that combines his strong religious beliefs, interest in nature, and exceptional imagination. Less than a quarter of the church was complete at the time of Gaudí’s death in 1926 and progress slowed soon after, picking up again during the 1950s. In 2010, construction passed the halfway mark, with a hope for completion in 2026—the 100-year anniversary of Gaudí’s death. For now, visitors to the stunning basilica and chapel must share the space with moving cranes and the sound of jackhammers, though the ongoing construction cannot take away from the Sagrada Familia’s breathtaking design, both inside and out. Purchase tickets online before you go and spring for the audio guide and visit to the towers—it’s worth it. 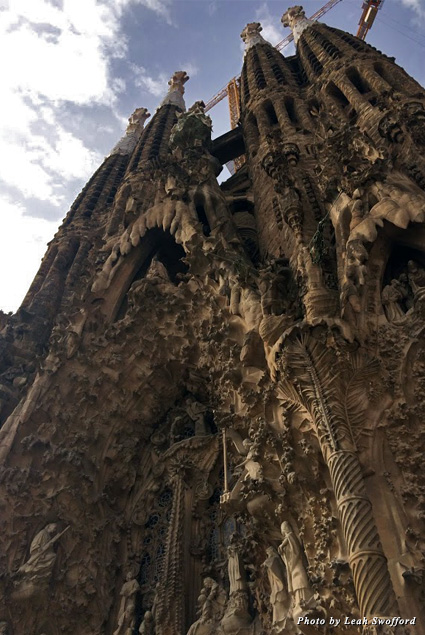 Another Gaudí creation that’s not to be missed is Park Güell, a public park featuring gardens and the architect’s signature imaginative designs. The park’s namesake, Catalan entrepreneur Eusebi Güell i Bacigalupi, was Gaudí’s friend, associate, and benefactor; the two were devout Catholics who shared an interest in uniquely designed buildings. Park Güell, an example of Gaudí’s naturalist phase, was constructed from 1900 to 1914 and officially opened to the public in 1926. Since then, visitors have been drawn to its geometric design and historical, political, and religious symbolism. 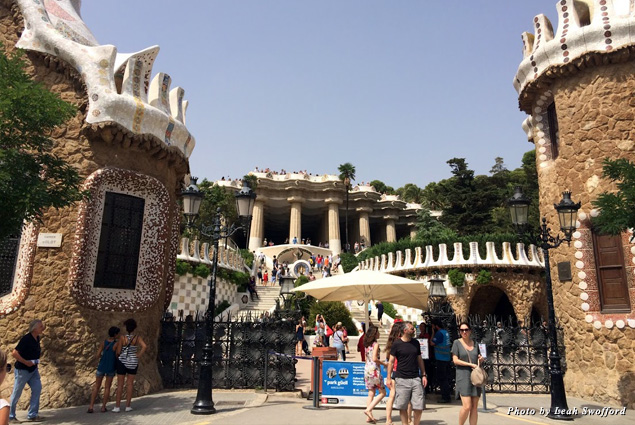 Those eager to see even more of Gaudí’s work can hop aboard the Catalunya Bus Turistic for a day trip to Colònia Güell, an industrial colony established in 1890 under Güell’s guidance, and Gaudi’s Crypt, the church constructed as a place of worship for the workers who lived in the small town. Though it remains unfinished due to a loss of funding, the crypt served as an experiment for many architectural elements Gaudí later used on the Sagrada Familia. This tour was an excellent way to learn about and see more of Catalonia beyond Barcelona. There are several interesting itineraries on offer; ours not only gave us more Gaudí but also took us to Montserrat, a mountain located about an hour outside the city most known for its Benedictine abbey, Santa Maria de Montserrat. 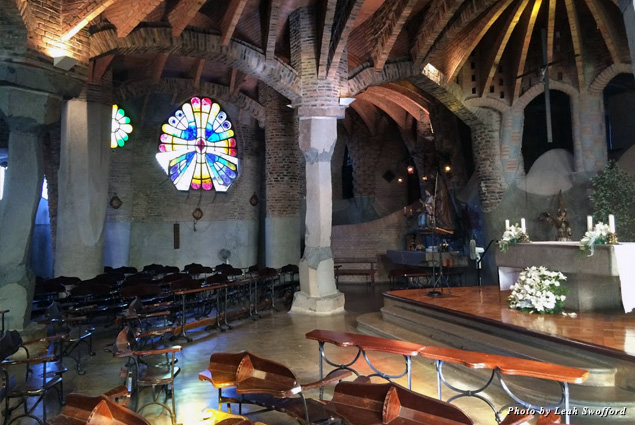 Sports fans would be remiss not to pay a visit to the Camp Nou Tour & Museum, home of Futbol Club Barcelona since 1957. Though our trip to the city unfortunately did not line up with an FC Barcelona home game, we were incredibly impressed by the access allowed with a tour and museum ticket during a non-game day. The main museum room features row after row of trophies won in domestic and international competitions, including a special section for the continental treble—taking the top spot in three top-tier competitions in a single year, a feat which has been accomplished by only eight teams in the Union of European Football Associations (and which FC Barcelona has completed twice).

Even more exciting than viewing the awards and memorabilia from the team’s more than 100-year history was our journey through the stadium. We first got a glimpse of the inside of the 99,354-capicity stadium from up in the stands, before winding our way through the building down through the away team’s locker room, the press conference room, and finally out onto the pitch. This is the largest stadium in Spain by capacity and the largest stadium in Europe; the team, familiarly known as Barça, is the second most valuable in the world and is owned by its supporters, who take pride not only in their team’s success but also in its representation of Catalan culture and community pride. 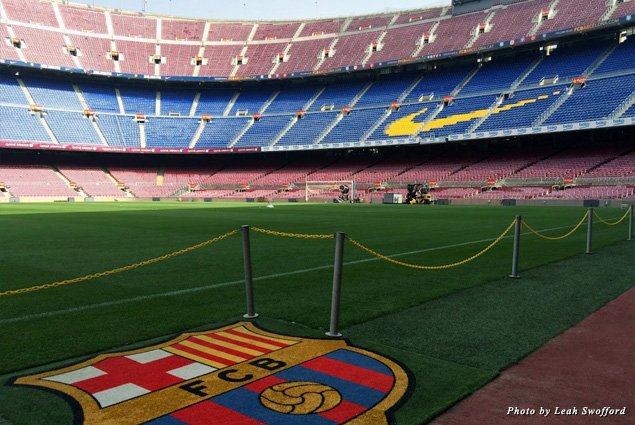 It wouldn’t be a trip to Barcelona without some time spent at the beach. Many locals and visitors take the metro to La Barceloneta, a neighborhood bordered by the Mediterranean Sea that is known for its many restaurants and nightclubs along the boardwalk.

The Port Cable Car connects La Barceloneta with Montjuïc, a somewhat flat-topped hill overlooking the harbor. With a commanding sea view, Montjuïc provided the perfect spot for several fortifications, the most recent of which was built in the 18th century and still stands today. It can be reached via a funicular railway followed by a gondola lift that offers prime views of the city. Visitors to the hill can also view the “Olympic Ring” of sporting venues surrounding the 65,000-seat Estadi Olímpic Llluís Companys, which was originally built in 1927 for the 1929 International Exposition and served as the site of the 1992 Summer Olympics. 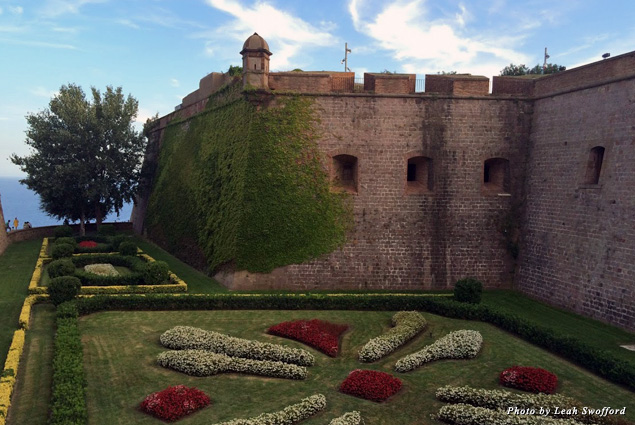 Montjuïc is also a favorite for art lovers, as it’s home to the Fundació Joan Miró, a museum of modern art dedicated to the work of Joan Miró, and the Museu Nacional d’Art de Catalunya at the stunning Palau Nacional, which dates back to 1929. The national museum of Catalan visual art showcases works from the Romanesque, Gothic, Renaissance, Baroque, and modern collections.

Another must-see museum is Museu Picasso, located down a narrow street in Barcelona’s Ciutat Vella (Old City). Opened in 1963, the museum includes more than 4,300 works from Picasso’s early years, his Blue and Rose Periods, and his time spent in Barcelona. Visitors can also view the 57-piece collection of Picasso’s interpretation of Spanish painter Diego Velázquez’s “Las Meninas,” the only series of work by the artist on display together in one museum.

After our museum visit, we decided to skip the metro and instead explore the Old City’s stone building-lined streets on our way to La Rambla, a tree-lined pedestrian mall and popular tourist spot. Stretching for a quarter of a mile from Plaça de Catalunya to the Christopher Columbus monument at Port Vell (a definite Barcelona photo op), La Rambla began as a waterway for rainwater during the spring and autumn and became a street after construction included the area within city walls in the 14th century. Today, it’s a crowded hub of people, street performers, and souvenir carts (and, unfortunately, a reputation for pickpockets).

One important stop off La Rambla is La Boqueria, which started in the 1200s as a traveling market and eventually settled alongside the popular street in the 18th century in order to attract the most foot traffic. La Boqueria grew, adding a fishmonger’s stand and metal roof and improving sanitation requirements and the market’s overall aesthetic. Many current vendors are third- and fourth-generation sellers of La Boqueria’s fresh meats and seafood, fruits and vegetables, baked goods, charcuterie, herbs, wine, and artisan products. 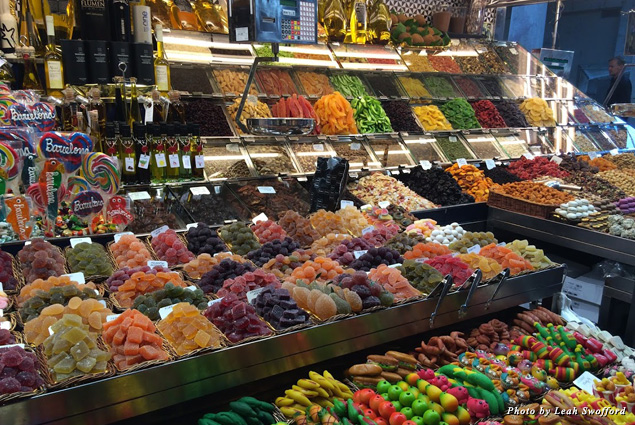 Foodie fun on La Rambla doesn’t stop with La Boqueria, as we found out with a trip to the Jamón Experience. The tour began with a 25-minute audiovisual experience that took us through the making of the gourmet Spanish delicacy jamón ibérico, from selecting and raising the black Iberian pigs to the long process of salting and curing the swine’s hind legs to perfection. We completed our lesson with a jamón tasting, a sampling of varieties of the ham paired with cava, wine, or beer.

Though the sweet, nutty, and slightly salty jamón ibérico was certainly a dining highlight, there is much more to Barcelona cuisine than gourmet charcuterie. On the advice of a local friend, we tried to steer clear of any restaurant with a mostly in English menu (the sure sign of a tourist trap) and get out of our comfort zone for a more authentic dining experience. This led to several memorable tapas-style meals in the city, almost always including a plate of pan con tomate (bread rubbed with fresh tomatoes and topped with oil and salt) and patatas bravas (chopped white potatoes served with aioli and tomato sauce).

Barcelona’s coastal location also means seafood is plentiful and used in dishes throughout the city. “Chef of the Sea” Ángel León draws on his passion and knowledge for a variety of seafood—from seaweed to shellfish—to create breakfast, lunch, and dinner menus for BistrEau at the Mandarin Oriental, Barcelona. The hotel also welcomes guests and locals to its two Michelin-starred Moments restaurant, historical Banker’s Bar, outdoor Mimosa Garden, and rooftop Terrat.

There seems to be a story around every corner in Barcelona. The city’s eye-catching architecture, cultural pride, and delicious cuisine make this a place you’ll want to return to again and again. There’s much to discover here.