Christmas Centerpieces of Breaded Ham From A. G. Ferrari and Smoked Goose From Schiltz 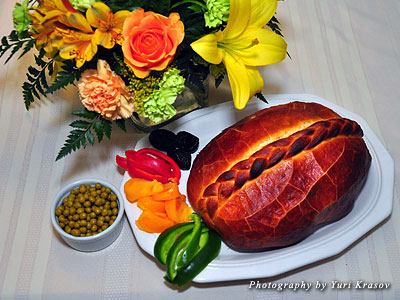 Unlike any other holiday ham, A. G. Ferrari’s Prosciutto Cotto in Crosta comes breaded in artisanal dough that forms a golden-brown crisp crust lined with pork juices.

The traditional celebratory dish from northern Italy is a ready-to-eat boneless smoked ham rubbed with honey and then baked in dough.

The meat is fresh, tender, and mildly seasoned, and the crust is so decadent, you’ll have to make sure you divide it between all your guests fairly.

There is some work to be done by the home chef – to heat the 3.5-pound ham, place it in the 300-degree oven, uncovered in a baking pan, and watch for the coloring of the dough. If it gets too dark, cover with foil. It takes from two to three hours to heat the ham through and let it rest before carving.

To carve, cut through the breaded ham in the middle and set aside half until needed so it will retain its temperature. Break off the baked bread shell from the other half and slice the ham. 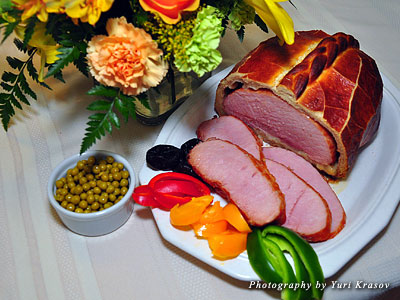 This is by far the easiest way to serve a main course at a holiday party.

Named after Annibale Giovanni Ferrari, born in 1898 in the Emilia-Romagna region of Italy and the founder of a specialty food store more than 90 years ago in the San Francisco Bay Area, A.G. Ferrari is well-known for its authentic Italian products. They range from olive oils and balsamic vinegars to pastas, sauces, and smoked meats selected from 20 different culinary regions of Italy. 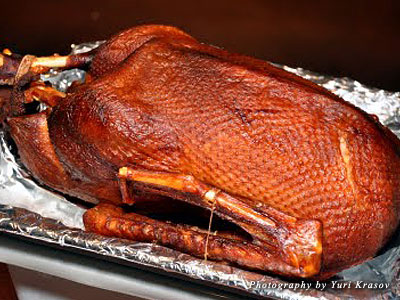 Schiltz Foods of Sisseton, South Dakota is the largest goose farmer in America and is now producing a hickory-chip smoked goose, fully cooked and ready to eat from the refrigerator, served at room temperature, or warm from the oven. The whole smoked goose has rich dark meat and can be used as an entrée, hors d’oeuvre, or sliced for sandwiches. Because the goose is fully cooked, the fat has already been discharged and there are only traces underneath the skin. Schiltz Foods also sells goose livers from geese raised in an animal-friendly environment with no force-feeding. Unlike foie gras, the fatty goose liver occurs naturally as a result of more fat being produced in the animal than can be transported for storage elsewhere in its body. Fats and fatty acids, from the naturally fed food that the geese eat, travel first to the goose liver where they are combined with protein and then sent throughout the body for storage for later use. Some birds genetically produce more fat than the proteins in their bodies can accommodate. The fat remains in the liver where it accumulates, thus the liver grows to about two to three times the size of a normal goose liver, approximately 1/3 to 1/2 pound in weight. Birds producing this fatty liver are roughly twice as old, and therefore, larger in size than most birds from the flock sent to market.

Other available products include goose breast, goose eggs, goose fat, and others. Place your order online.