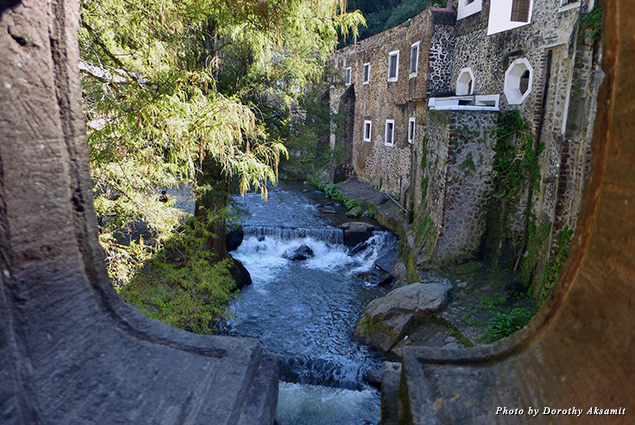 When it was over, I couldn’t believe I hadn’t visited Chalma, Mexico, before. After all, it is the second-most visited religious destination in Mexico after the Virgin of Guadalupe near Mexico City. The Virgin of Guadalupe, who appeared before a poor Native American man named Juan Diego, gave to Mexico its own Indian virgin and 10 years later, from a dark cave in Chalma, an image of a black Christ miraculously appeared, completing the two most important icons of the Catholic Church and facilitating the conversion of the Native Americans.

I had been down this road eight times on my trips to Malinalco and even had a brochure with a photo of the church, but the church didn’t resemble the one glimpsed from the bus. Where is the church in the canyon built over the cave, the one where the image of the black Christ was found and where today’s pilgrims bathe in a sacred stream, circle a magical tree, and dance with crowns of flowers in the church plaza? The pilgrims come on buses, in cars, and on bicycles, and some walk for three days through the mountains, sleeping under the stars. They come seeking to cleanse their sins and to ask for favors. One Sunday, I decided it was time to clear up the mysteries and visit the Church of the Dark Lord.

On the corner of the zocolo in Malinalco, I caught one of the taxis that run in a continuous loop for the 15-minute ride between Malinalco and Chalma. My taxi driver, Adriano, was from Chalma and had worked in construction in California. I’m always happy to find someone who has lived in the States, is a bit talkative, and, maybe, is a little more understanding of gringas like myself bumbling around Mexico. When he stopped beside the busy road that runs through Chalma, I saw only storefront cafés and souvenir shops. I did not see a church or a sign for it, and I suddenly realized I hadn’t a clue where to go. Without hesitating, I asked Adriano if he could accompany me, and he quickly answered it would be 100 pesos an hour. I readily agreed, and after he wheeled into a parking lot hidden between two buildings our adventure began. 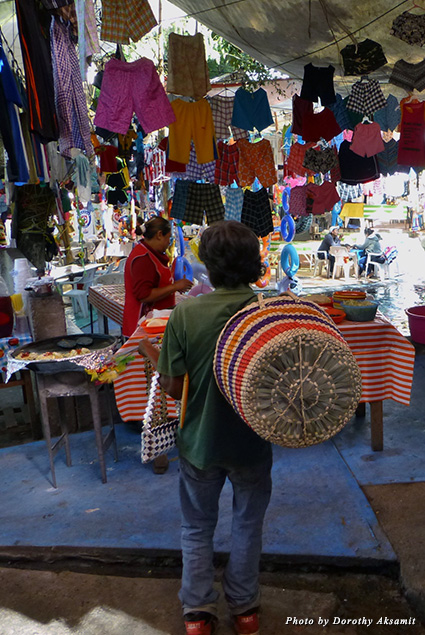 Across the street we entered another opening between storefronts, and as we turned right I felt like Alice in Wonderland as she fell down the rabbit hole into another world. We descended slowly along a path into a tunnel lined on both sides with neatly stocked kiosks holding souvenirs designed to attract the more than two million religious pilgrims a year who visit Chalma from all over Mexico. There were the usual T-shirts, belts, hats, snacks and, of course, religious icons. My favorite was a kiosk full of handmade wooden toys with everything from circus wagons to big construction cranes. One surprise was a stall with buckets of honey and another where a young man was mixing, boiling, and rolling sheets of peanut brittle. Of course, everyone knew and greeted Adriano, which made for a cozy scene and no hassles. 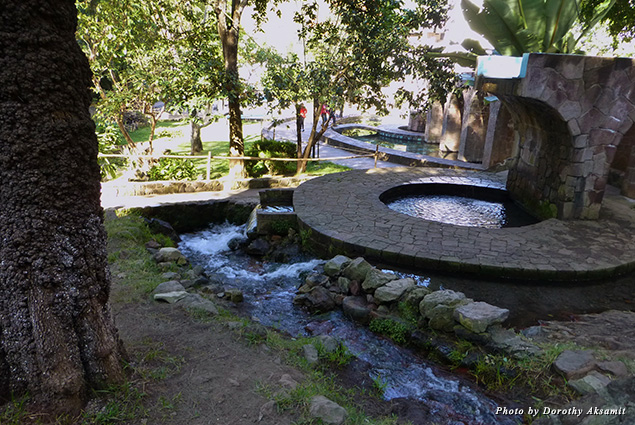 Just past the candy stall I saw an opening leading into what appeared to be a water park with walkways and brick channels spilling manmade waterfalls. This is a water park where pilgrims can rest before their visit to the church. Adriano walked past it and it was then I realized I had a taxi driver and not a tour guide. After all, I had only asked to go to the church.

As we descended into this strange new world, we were greeted by a mélange of Mexican aromas and melodious songs sung by caged birds swinging above bubbling cauldrons. There were food stalls worthy of a food crawl dispensing tacos, tamales, tlacayos, quesadillas, and Micheladas. 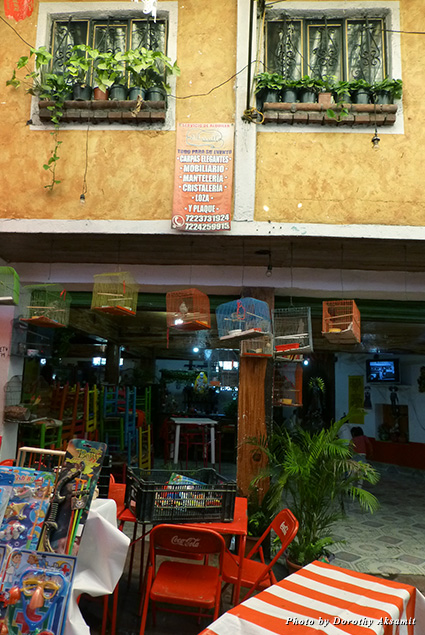 I was so distracted I momentarily forgot we were on our way to church when suddenly an expansive plaza opened up to reveal the imposing church of the Royal Monastery and Sanctuary of Our Lord Jesus Christ and Saint Michael of the Caves of Chalma. This incarnation of the church was authorized by Charles III of Spain in 1783 and replaced several other churches built near the cave where the man-sized black stone image of Oxtoteotl, the god of magical and healing powers, was found.

In pre-conquest Mexico, a god ruled every facet of daily life and every god in the enormous 2,000-god pantheon had many forms and functions. Oxtoteotl is an aspect of Tezcatlipoca, the “Smoking Mirror,” representative of the Mexican night. And to further confuse the Western mind, Oxtoteotl can appear as a jaguar or in conjunction with the god of war. But with all these gods and complex manifestations it becomes easier to see how the indigenous worshipers could readily accept the idea of a new god, one represented by the Father, the Son, and the Holy Ghost. 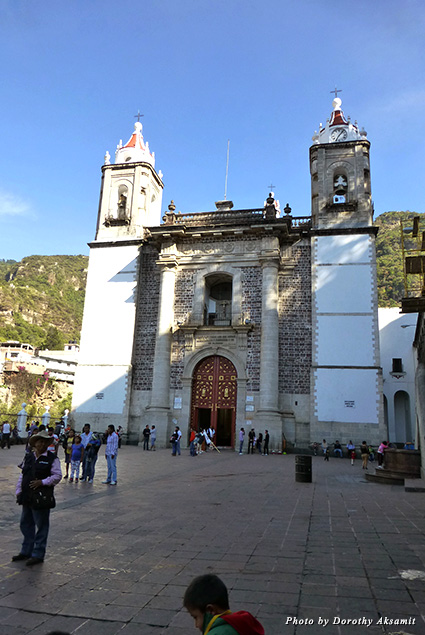 On the second floor of the arched portal flanking the church I was startled to see an amazingly colorful troupe of swarthy men whose cloaks were embroidered with the Virgin of Guadalupe and whose helmets sported waving red, blue, and yellow ostrich feathers. They seemed to be waiting for a cue for a ritual descent to the plaza. Meanwhile Adriano was urging me to go into the church, presumably a quick trip in order to be back on the plaza for the Aztec dance. 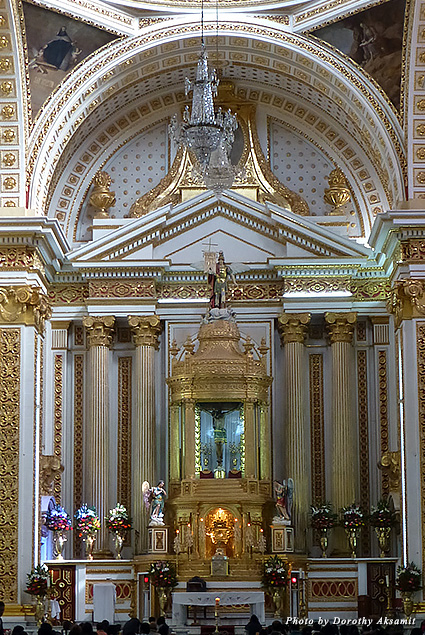 The inside of the lofty, light-filled neoclassic church was dazzling gold, white, and pastel blue with the dark Christ on the cross on the main altar. The wedding cake-like church was the antithesis of the cave where the original image of the dark Christ was found. There are several legends revealing the metamorphosis of the idol, Oxtoteotl, into the dark Christ. According to one, in 1537, approximately 10 years after the appearance of the Virgin of Guadalupe, the early priests followed worshipers to the cave and found the black stone idol with its offerings and possibly evidence of human sacrifice. They urged the worshipers to destroy the idol, but when they returned three days later they found the idol had been smashed and, miraculously, an image of a crucified dark Christ had taken its place. Although the idol had been destroyed, the priests allowed the rituals of flower offerings, bathing in the sacred springs, and dancing to continue. It is these rituals, whispers from an ancient past, which can still be seen on saint’s days in Chalma.

With Adriano gathering speed and leading me to a side door and through a passage where two priests blessed the pilgrims after they had paid a fee at the adjoining counter, we came to a patio whose side portals were filled with oil paintings. An official sitting at a desk beckoned us over and I thought, “Oh no, what have we done wrong?” But he wanted to take us up a flight of stairs and show us other paintings. No need to feel guilty after all. 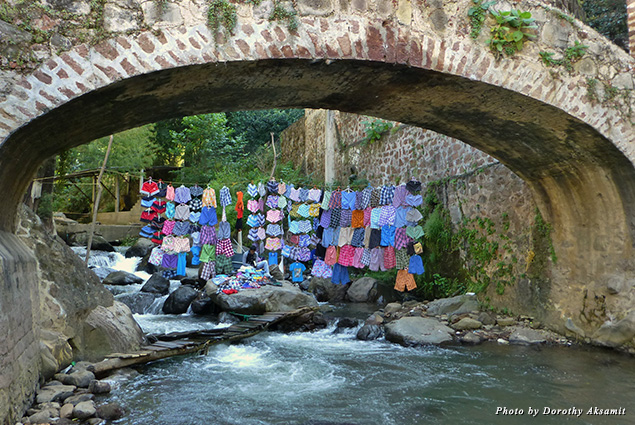 We emerged from the church onto an elevated stone walkway arched over the rushing Chalma River fed by a spring believed to have magical healing properties. The faithful walk around an enormous cypress tree before bathing in the waters. In case the men forgot their swimsuits, there were plenty for sale in the middle of the river.

Adriano led me into another passage where more cafés and kiosks lined the walkway. As the path became wider we seemed to be on an island with rushing waters on both sides and small cafés in the middle. A musician with a guitar waited in a café where pinball machines lined one wall and a small swimming pool was on another level. Suddenly, we emerged back on the main street and into the real world. 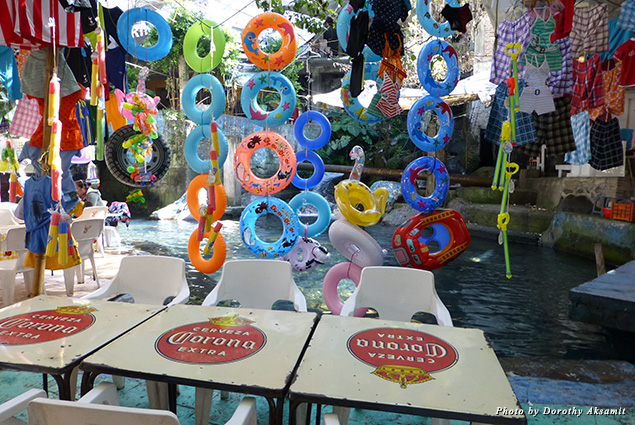 I had become so enchanted with the other world I had forgotten about the Aztec dancers. After my visit to the church I was swept into an unfolding pageant that somehow shared the most sacred beliefs of the Catholic Church with a Mexican touch that turned every occasion, no matter how solemn, into a lighthearted fiesta. I’m sure I missed a lot of the performance, and I’m confused about several of the details, but I have seen the stage set and now I need to return for the performance on a Saint’s Day. 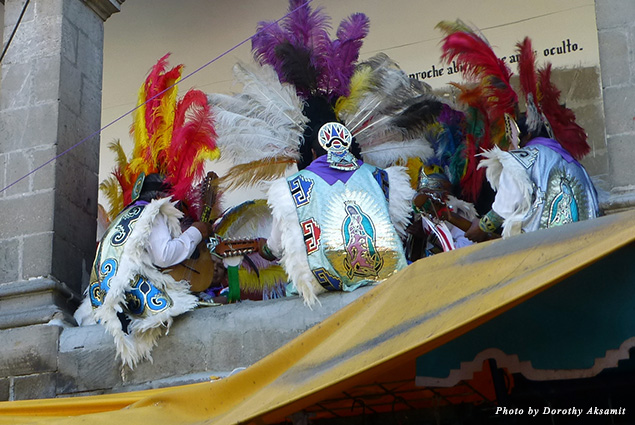 Escape by Bus for a Day Trip to Cuernavaca, Mexico Celebrating Day of the Dead in Malinalco, Mexico