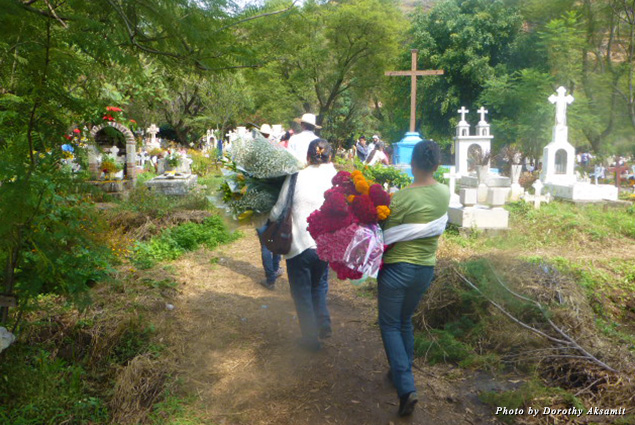 Total immersion Day of the Dead celebrations occur all over Mexico, but some places receive more press than others and the holiday comes with hotel and restaurant prices doubling and crowds morphing into raves. On my third trip to Malinalco, I came for the Day of the Dead celebration. I keep returning because it’s a quintessential Mexican pueblo with cobblestone streets lined by wedding cake-white walls looped with cascades of purple and orange bougainvilleas. The zocolo is the true center of the town and everyone from school children to shoppers to venders are apt to pass by at least once a day. Most points of interest are within a few blocks of the zocolo, and a constant parade of taxis are available for longer distances. And, so far, prices for the Day of the Dead celebration have remained the same as few foreign tourists have discovered it. 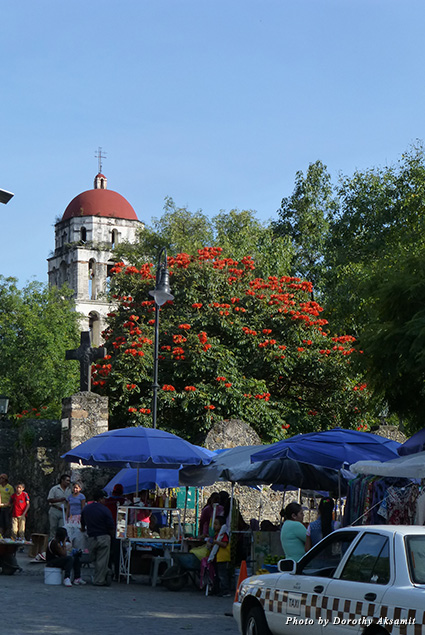 Although Malinalco lies in a lush sub-tropical valley surrounded by mountains just two hours southeast of Mexico City, none of my gringo friends, not even the ones who live in Mexico, had heard of it. But the three Chilangos (residents of Mexico City) who sat beside me on various plane trips said they vacation there frequently. 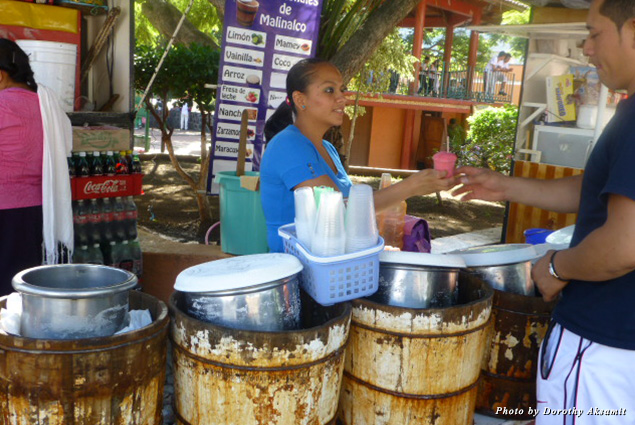 Malinalco is my escape hatch from the pressures of daily life, and I looked forward to sitting on the zocolo and watching the Day of the Dead celebrations. At the zocolo, I unfolded myself from the backseat of a collectivo taxi from Chalma and made a beeline for the nieves stand, where eight aluminum canisters were filled with delicious sorbets—one of the reasons I keep returning to this Pueblo Magico. I will savor all the flavors before I leave; my favorite is the deep blue one dense with blackberries, called zarzamora. A close second is the salmon colored mamey, but even the delicate rice-flavored one is refreshing. 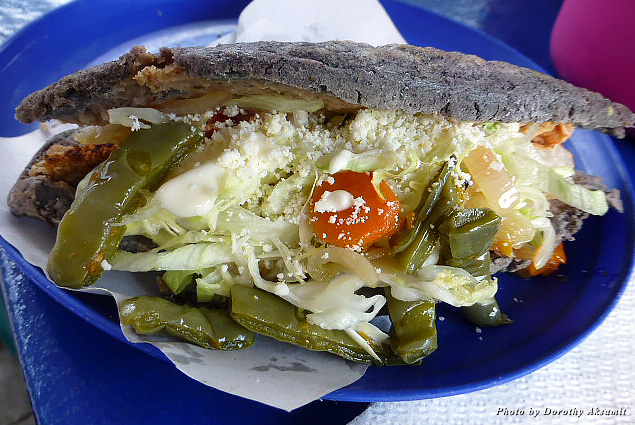 With my prize in hand I sat on the circular stone bench surrounding the zocolo fountain and looked for familiar landmarks. Food kiosks line two sides of the zocolo, and I listened for the slap, slap, slap as Dona Carmen, her long gray braid hanging over her checkered apron, forms blue tortillas in the ancient ways of her Aztec ancestors. She tosses them on the charcoal grill and then fills them with mashed fava beans for the smartly dressed office workers from the adjacent Government Palace. At another street stall blue tortillas are heaped with cactus, lettuce, and peppers.

I looked above the yellow entrance to Los Placeres Restaurante to the Hill of the Lost Idols; if the light is right I can spot the conical roof of the Aztec Ceremonial site, the reason for my first visit Malinalco. To my left were the massive stonewalls of the 16th century fortress church of the Augustinians. Stones from the Aztec site can be found in the building, and Garden of Eden frescos fill the walls of the cloister. But the stone wall had become the backdrop for buckets of marigolds, the flower whose scent lures the dead back home for a night of celebration and remembrance. Sizzling beef for tacos joined the symphony of cooking sounds as the pungent scent of marigolds mingled with ripe papaya, mango, pineapple, and guava and a strange smell coming from the butcher’s table—I had forgotten the smell of freshly butchered meat.

At the tourist kiosk I picked up a list of happenings and was happy to see that most of the activities from October 30 to November 2 would take place around the zocolo.

Walking across the zocolo past rebozo-clad women sitting on the cobblestones presiding over 10 avocados or a bundle of herbs, I was happy to see two places I frequent were still there: the chicken rotisserie and the juice stand with choices of pineapple, papaya, mango, and melon. At Posada Familiar, Max and Isabel, who both speak English, welcome travelers. It’s probably the most basic lodging in town and suits me because it’s just a few steps from the zocolo. From my Juliet balcony I can watch the daily markets transform the street below into a colorful bustling fair. Market day is every day, but on Wednesdays the locals disappear and hundreds of traveling vendors create a gigantic street mall. Local weekend markets lure tourists with jewelry, hammocks, stone planters, and handmade toys. 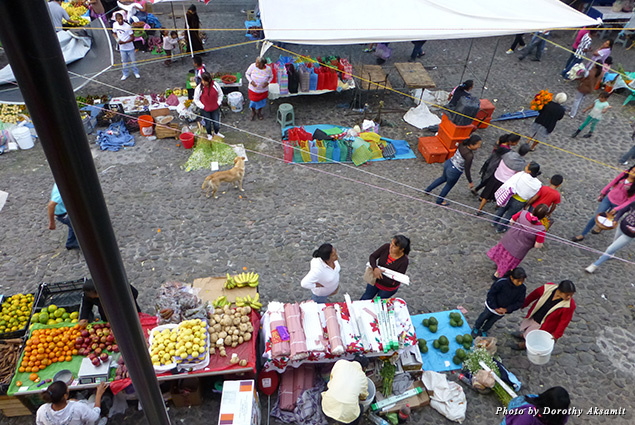 My first foray was to the Casa de Cultura, across the street from the zocolo. High school students had set up eight altars, most of them stepped altars filled with flowers, fruits, vegetables, and mementos to specific persons. One altar celebrated the bounty of Mother Earth, and another, which I called an “eco altar,” depicted the earth after it has been filled with trash and nothing grows. In the center was a bundle of trash wrapped in a dirty, gray woven mat surrounded by dusty empty plastic and glass bottles. There were no fruits, flowers, breads, or tequila as the earth was virtually dead. It was a bleak scene. 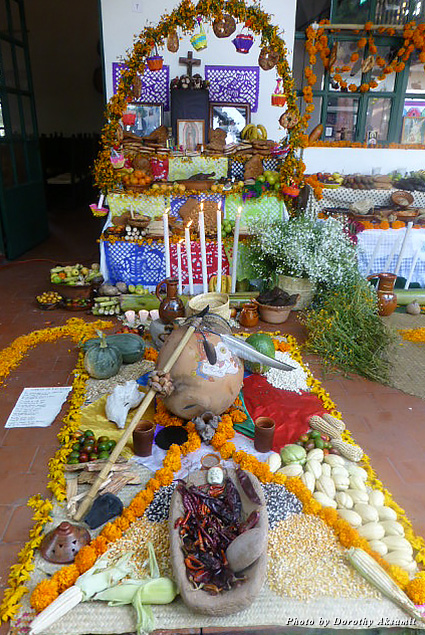 In Malinalco, if a person dies the previous year, it is customary for the family to set up an altar in their house for the newly dead. One of the most charming of these altars was in a home near Posada Familiar. A curving path of marigolds led to the front door, where a skeleton dressed as the deceased welcomed visitors to the altar. I was invited in and encouraged to take photos. 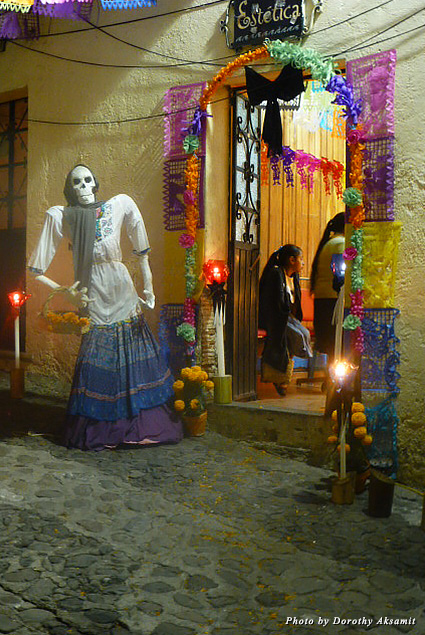 On one evening, I visited the church and was startled to see the Day of the Dead altar there held, not sugar skulls, but some 15 photographs remembering the men, women, and children who had lost their lives crossing the border to the United States. 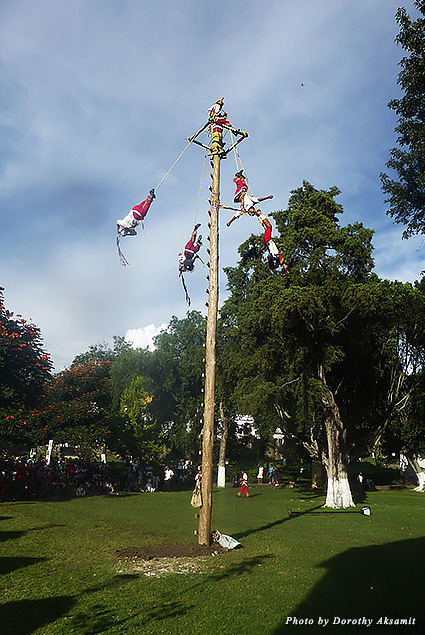 Outside in the churchyard I watched as a tall tree trunk was planted in cement for the Papantla Flyers performance the next day. It’s always a mesmerizing moment when the wizened drum and flute player climbs to the small platform attached to the top of the pole and the four Flyers, messengers to the sun, fall like feathers, rhythmically circling the tree of life 13 times, recreating the 52-week  path of the sun. This ritual is a prayer to the sun god asking for the rains that will nourish the crops.

All of the entertainment is in honor of the dead. In addition to the Papantla Flyers, there is also teenage hip hop, contests for the best pan de muerto (bread of the dead) and costume, plays, poems, and even hula dancers. 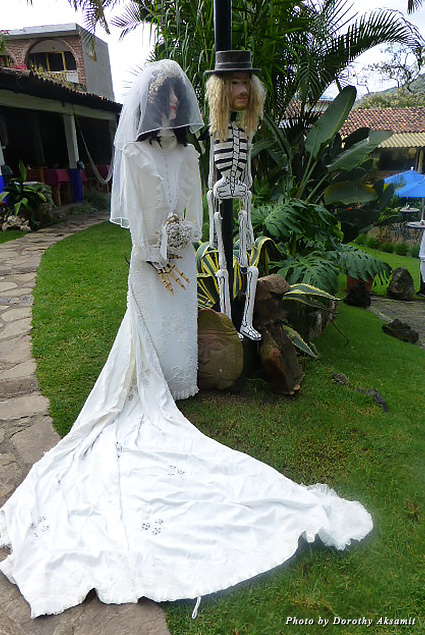 I joined the parade of locals walking several blocks to the cemetery, called the pantheon. Inside, I sat on a bench under a tree with a blind grandmother and her teenage granddaughter. We watched as young and old hauled in bundles of flowers, candles, and food baskets. A trio sang softly at a grave while a family spread out a picnic. 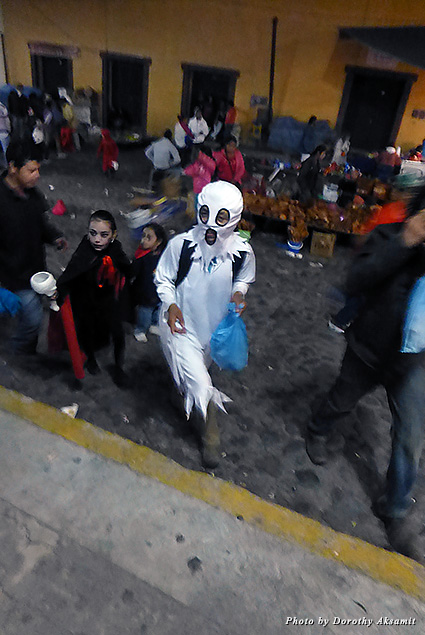 On the evening of November 2, the official night of the dead, I watched from my balcony as hoards of witches and goblins invaded every business, trick or treating. I forgot to go to the cemetery for a photo op, maybe because of a downpour in the afternoon, or maybe because of the lively street scene beneath my balcony. Or maybe because the spirits of the dead are sure to return to the party next year.