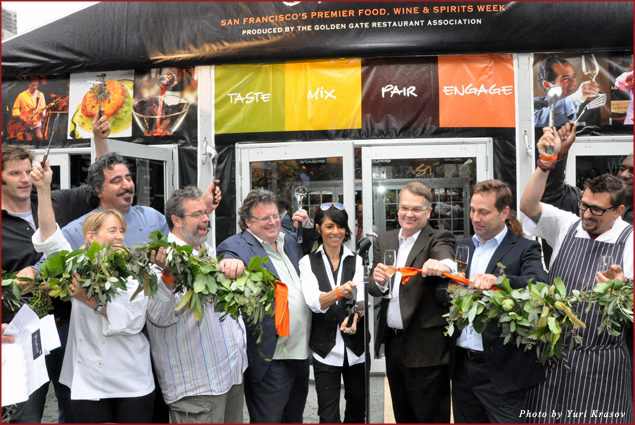 When you see a Domaine Chandon sparkling bottle cut open with a chef’s knife, and Blanc de Noirs splashes up in the air over Union Square, you’d better believe something grand is about to happen. San Francisco’s premier food, wine, and spirits event, SF Chefs 2010, opened with a wine and dine celebration, Hog in the Fog, at the Grand Testing Tent on Friday, August 13. Celebrity chefs of the City by the Bay gathered for a ribbon-cutting ceremony, presented by the National Pork Board and Wente Vineyards.

Kevin Westlye, Executive Director of Golden Gate Restaurant Association and Andrew Freeman, President of Andrew Freeman & Co. were among the speakers, as well as chefs Chris Cosentino of Incanto, and Dominique Crenn of Michelin-starred Luce at the InterContinental San Francisco. Dominique read a heart-felt poem devoted to our city, and then she held giant scissors to cut the red ribbon that separated the gathering crowd from the earthy delights created by SF Chefs.

Now in its second year, the city’s premiere food and wine event celebrated Northern California’s tastemakers and the unique flavors of the region. Stars of the food world orbited the tasting tent and the Westin St. Francis, where classes and events were hosted throughout the week. Diners and chefs alike tasted perfectly portioned bites of all flavors at parties ranging from Sugar to Spice, on-site cooking demonstrations, and at Grand Tastings over the weekend. 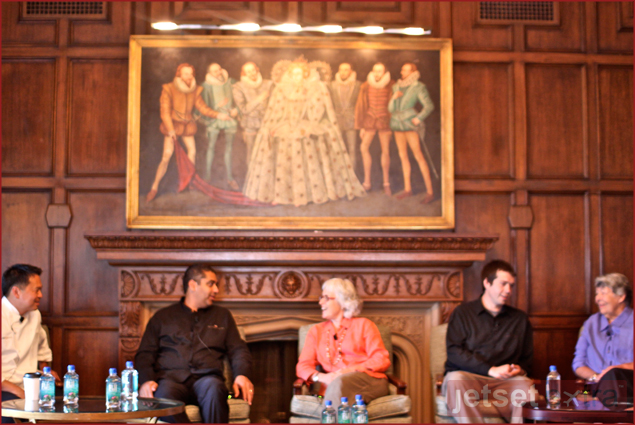 San Francisco is a mecca for great food, taking advantage of a mild climate, quality seafood and meats, and fresh produce from throughout Northern California. SF Chefs offered fans a chance to get to know the local food culture’s tastemakers at A View from the Top, a panel featuring chefs Michael Mina (Restaurant Michael Mina, RN74), Cindy Pawlcyn (Mustards Grill, Go Fish and Cindy’s Backstreet Kitchen), Charles Phan (Slated Door, Out the Door, Heaven’s Dog), and family members Perry Hoffman (Éoile) and French Laundry legend Sally Schmitt. Each of these gastronomy giants shared their histories and philosophies, finding more in common with each other than not. Most of them started young, from Pawlcyn who started catering in high school, to Hoffman, who reminisced about roasting red peppers in the family restaurant before he was tall enough to see the stovetop, knowing when to turn them by smell alone. Many had originally wanted to be artists with careers in ceramics or photography, before falling in love with the kitchen. The chefs shared both their missteps and triumphs. Sally Schmitt once fired a man who replied, “I can’t wait to see you fall on your face, missie.” She’s laughing last as a legend in the food world. It was a revealing look at the people defining the styles of cooking and flavors we enjoy today. 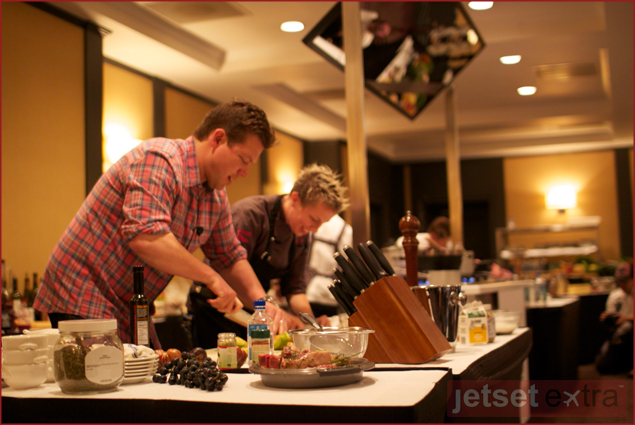 Keeping things lively were hour-long cooking challenges with surprise ingredients. On Sunday, celebrity chef Tyler Florence, with 15 years of Food Network shows under his belt and a just-opened San Francisco restaurant, Wayfare Tavern, and Elizabeth Falkner (Iron Chef, Citizen Cake) faced off against Jen Biesty (Top Chef, Scala’s) and Chris Cosentino (Iron Chef, Incanto). The secret ingredient was American Lamb, which was turned into everything from Lamb Tartare to Lamb and Chocolate Crepes, an unconventional dish that went over surprisingly well with the judges. As things heated up, the chefs playfully fought for burners, got down on their knees to chop their ingredients, and worked up a sweat. After plating and tasting, they spoke with the audience while awaiting the judges’ results. They offered advice for budding chefs: “Go to Europe,” said Florence, “Find a great chef in a great restaurant in Paris and live in the trenches for a while.” Biesty agreed, adding, “eat, read old cookbooks, and find out about tradition.” In the end there could only be one winning team, and Chris Cosentino and Jen Biesty took the edge over Florence and Falkner. 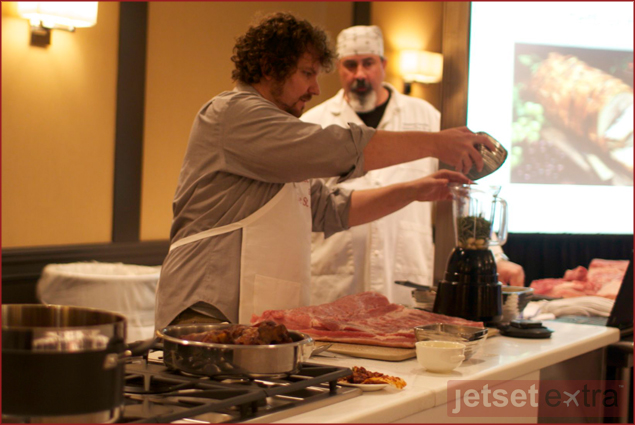 A foodie event with brains, SF Chefs also offered industry events where chefs, caterers, and curious cooks could come learn tricks of the trade firsthand from seasoned professionals. On offer were sessions about food media, hospitality, food and wine pairing, and more. At one such event, The Next Food Network Star finalist Tom Pizzica, and Stephen Gerike,of the National Pork Board, gave a lesson in what to do with a whole hog. The hefty porker (market weight for hogs gets up to 270 lbs) was brought in and deftly dismembered by Gerike before being expertly prepared in a cooking lesson by Pizzica. Attendees were able to taste dishes like prosciutto di porchetta sandwiches and tacos al pastor, and restaurateurs were able to have all their pork questions answered by the pros. 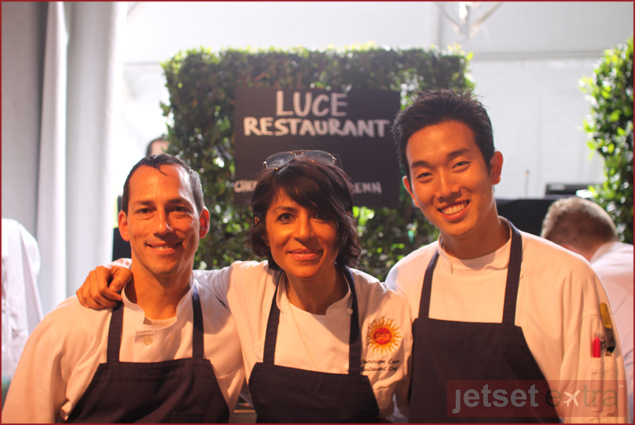 The weekend brought the main event: Grand Tastings under the tent in Union Square. In addition to demonstrations and discussions, tastings from dozens of different top restaurants and vineyards kept tastebuds tingling and waistbands taut. Tomatoes were a popular dish, with various gazpachos and tomato salads on display, including a unique “tomato water” from Iron Chef-winning Dominique Crenn and the team from Luce. For something meatier, Max’s served up sliced pastrami on sourdough, topped with grainy mustard. Barbacco’s entry packed loads of flavor in its Nduja with radish salad and Contigo made their mark with a montadito of wood oven roasted corn, chanterelles, bacon and manchego. Best presentation marks go to The Cliff House team for their Butterscotch Pots de Crème individually served in a hollowed out egg shell. 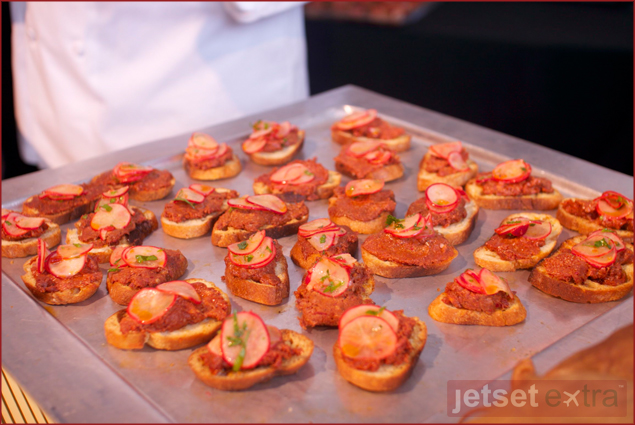 The Grand Tasting tent opened its doors on Friday, Saturday, and Sunday, showcasing the city’s best in area eateries. With such a selection, you were sure to find a bite you adored, and leave with a long list of must-try restaurants.

Foodies and chefs alike found irresistible flavor and much to discuss at this year’s SF Chefs. Expert panels, bite after bite of good food, and demonstrations for the home cook and professional alike turned Union Square into a food lover’s mecca for the week. Locals and visitors also took advantage of SF Chefs Restaurant Week deals, where participating restaurants offered up delicious and one-of-a-kind prix fixe meals. Long a culinary epicenter, San Francisco finally has the food event it deserves thanks to SF Chefs.